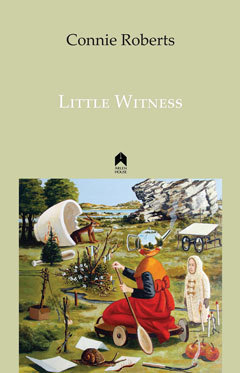 Connie Roberts’ powerfully forthright volume of poetry, Little Witness, includes a preface about the gaping lacuna of her wounded childhood: Irish industrial school at age five, a brief return home, then a return to the orphanage until age seventeen, all as one of fifteen siblings. And while she posits in this note that “The names of certain people mentioned in this collection have been changed for the protection of the individuals concerned”—as if the poems represented, perhaps, a version of journalism—no one goes unscathed. Between the volume’s epigraph from Seamus Heaney, in which he tells the author to “Keep digging for the good turf” and the final page, de profundis, a wrenching history arises to the reader. A dark and entirely moving work, Little Witness emerges from a history Ireland might prefer to forget, one of Magdalen laundries, poorhouses, and in which the buried children, like those of Tuam, continue to cry out for an advocate. Roberts fills this role, as she writes in one poem, with blazing truth.

From its outset, then, Little Witness is concerned with testifying on behalf of those who cannot or have not, and with doing it openly. American poet Carolyn Forché, whose work emerges from a tradition of 20th Century European poetry in which often-violent political realities inform the poems and muddle the degree to which the poet is agent, explains this impulse in her essay “Twentieth Century Poetry of Witness,” writing:

By situating poetry in this social space, we can avoid some of our residual prejudices. A poem that calls us from the other side of a situation of extremity cannot be judged by simplistic notions of "accuracy" or "truth to life." It will have to be judged, as Ludwig Wittgenstein said of confession, by its consequences, not by our ability to verify its truth. In fact, the poem might be our only evidence that an event has occurred: it exists for us as the sole trace of an occurrence. As such, there is nothing for us to base the poem on, no independent account that will tell us whether or not we can see a given text as being "objectively" true. Poem as trace, poem as evidence.[1]

In Little Witness, Roberts serves as court reporter for a generation of Irish children (her family’s included) whose stories have only begun to emerge, each poem a gut-blow. Again invoking Heaney (this time, his Preoccupations), as well as Joyce’s epic, Ulysses, Roberts’ first poem is an “Omphalos,” that stone which marked the center of the world, as Heaney wrote. However, if Heaney and Joyce’s “omphalos” are magnetic home places, memorials of their Irishness and their works’ connections to the Greek poetic and epic traditions, Roberts’ is wholly different, being instead “A call to bear witness, brazen” (13).

The volume presents not only a poetry which bears witness to life as a semi-orphan might have experienced it—abusive (physically, psychologically, and sexually), full of loss, abject loneliness, and crushing disappointment—but it also provides readers with a view of a system of “care” that lies in the ruins of its own untenable nature. For example, in the mournful lyric “Inheritance” (27-31), Roberts inhabits the voices of the townspeople of Cavan upon the occasion of the horrific fire that consumed the Poor Clare’s St. Joseph Orphanage and Industrial School in Cavan in 1943, killing 35 children in care and one adult employee. Part I of the poem makes clear the speaker’s position as attestant:

It would be easy to saccharine their deaths

with morning dew (God knows, it could happen

of winged angels and burnished gold;

While memorializing the efforts of the townspeople to save the children, Roberts maintains her near-journalistic equilibrium and delivers the tale of “bungled / attempts at rescue,” eventually empaneling her audience to in judgment, for “it took forty-five minutes to / assemble a crew, five minutes more than it took the fire to swallow thirty-five children / and one old woman. Tell me, how does that add up?” (29). Ending the poem with a variation on the Litany to the Blessed Virgin, Roberts instead recounts the names of the dead, imploring the victims themselves:

Pray for us, o children of God.

Pray that our indifference will

The turn from witness to supplicant-of-victims is one that characterizes several of the poems in the volume, and thereby tempers what might be the overwhelming weight of the collection.

Little Witness, however, is not simply a catalogue of hardship and horror. Indeed, the book contains more than one loving maternal figure, willing to shield her children from drunken fathers, cold, hunger, and other ills. It is also a book in which the now-grown speaker can look back on a photograph of her fellow industrial school classmates and share with readers the light in their eyes, even if they only held it ever so briefly, as in “On Looking Into The Sunday Press Photo of Convent Children Looking Into A Stable,” in which she recalls:

of Gloria in Excelsis Deo

Even the poem’s most agonizing lines, which tell of abuse, provide the beautiful child subject to it some measure of free space: “Innocent, head-banded Maureen, a world away / from the beatings, self-mutilation, murder” (17). While marked by sadness, pieces such as “The Bread Bin Was Empty” reveal some sense of triumphant thanksgiving in the face of forces beyond the child-speaker’s control: that even though “The bread bin was empty, the money / gone on Guinness for himself, free rounds for the lads” there was a way out of the hunger, for “We stole into the church like elves. / The Lord helps those who help themselves, / so into the poor box we delved and robbed its contents unperturbed” (19). Little Witness demonstrates a survivalist will in the face of the selfishness of those who should be most caring; the father is most often presented as the great betrayer in this regard. The reporter of the father’s actions is sometimes the child speaker, sometimes the wife, but the result in invariably the same: violence and fearful rage. As “Good-For-Nothing Irish Blues” points out, sometimes the mother’s only recourse is institutions like the industrial school or other avenues of care: “Betimes I pretend I’m crazy. / Check into the mental home” (24-25). However, as the mother-reporter explains in lines that both begin and close the poem, it is an all-too-common situation that has happened before and will happen again:

However, not every poem in the collection exists within the suffocating, cloistered walls of the abusive household, the orphanage, nor even in Ireland. “The Boys From the Bunkhouse” (34) demonstrate Roberts’ ability to both deftly handle social issues outside of her own raw experience (here, the plight of intellectually disabled workers in an Iowa turkey processing plant); while “Campground, The Adirondacks” presents a speaker who can endure in the faith that rejoices: “let there always be the floating sky candles / carrying prayers to the summer super moon” (89). “Maisie’s Farm,” which Roberts indicates was written of “foster parents Mr and Mrs Coady” in memoriam, stands as perhaps the most joyful poem of the text, celebrating the joys of a life with actual loving care-givers. As its closing lines portray:

not forgetting the frolicsome        lambs or the forlorn sheep

the cud-chewing cows        or the curious goats

nonetheless for now         nothing will suffice

The true power of Connie Roberts’ Little Witness lies not only in its ability to articulate pain, but even more in its choice to bear its eponymous witness and forge beyond its speaker’s cruel childhood.