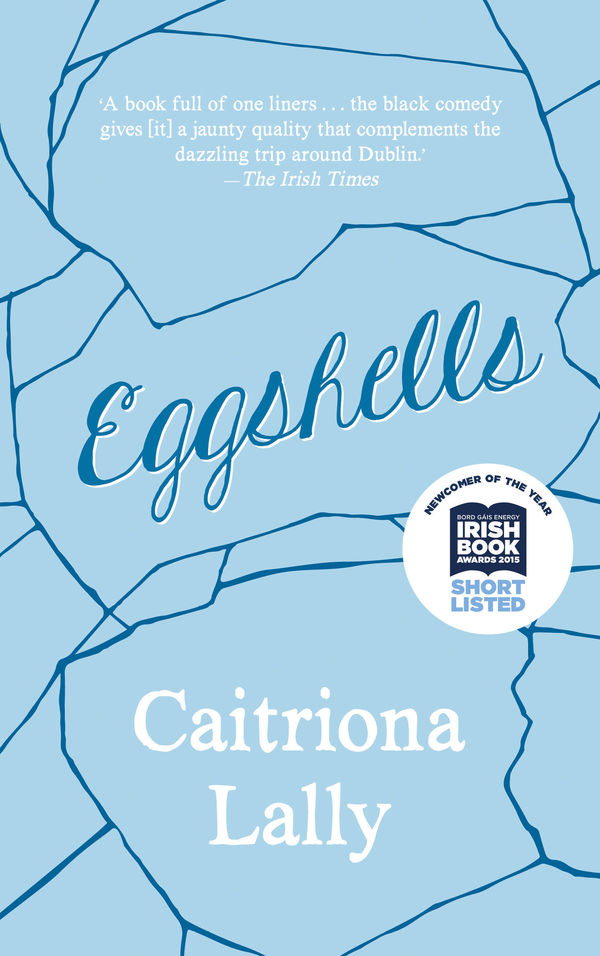 According to Irish folklore, the sinister changeling myth tells the tale of a human child stolen by fairy people and replaced with an infant from the otherworld. Placing the fairy child over a fire or dousing it in boiling water were believed to be two methods of bringing the human child back to its earthly place. The changeling has been well documented in Irish writing, from Yeats’ famous poem “The Stolen Child,” to more recent sociohistorical works that explore the possible real-life consequences of belief in this folklore, such as Angela Bourke’s The Burning of Bridget Cleary. While Caitriona Lally’s debut novel, Eggshells, opens with an epigraph of Yeats’s rendering of changeling folklore, this menacing myth takes on a completely new and contemporary twist in Lally’s Irish Times bestseller.

Before their death, Vivian’s parents told her that she was stolen by the fairies as an infant and that she is actually a changeling. Vivian is now a young woman journeying through contemporary Dublin in her attempts to reenter the otherworld. Left with an old house (and large collection of antique chairs) after her great-aunt’s passing, Vivian draws on Irish lore such as finding a leprechaun and sleeping with an eggplant in her arms as methods to secure a successful return to the fairy world and replace herself with the real, human Vivian in North Dublin. The novel paints a colorful landscape of Dublin; chock full of bus trips, coffee shops, and art museums, while poignantly communicating Vivian’s feelings of confusion and isolation that come along with her lifelong belief that she is an alien in the modern world.

In writing Vivian, Lally introduces readers to a dynamic, if at times perplexing, main character. One of the most unique and engaging of Vivian’s traits is her obsession with language. Vivian explains, “I wish there was a shop where I could buy buckets of words; I would cut them out from a numbered sheet, arrange them, and recite” (248). Letters and words are a source of anxiety for Vivian because they are often all she can see as she travels through the streets of Dublin. She makes endless lists of her favorite words (Propane and Butane, but not ‘and’) and takes careful note of the “blue-ed out” letters on the street signs she sees (23). This preoccupation with language relates to one of Vivian’s major struggles throughout the novel: making connections with other humans, from small interactions with strangers on the bus to more meaningful relationships with family members such as her older sister. Also called Vivian, Vivian’s sister is a married mother of two children, effectively serving as a foil to her younger sister’s unconventional lifestyle. Older Vivian’s impatience with her quirky sister becomes most evident during a disaster-filled dinner party that protagonist Vivian goes to great lengths to prepare. Yet, Vivian’s efforts fall short, and her sister, brother-in-law, niece, and nephew leave in a huff. The madness of the dinner party establishes the stark divide between the two Vivians and further isolates protagonist Vivian from any relational ties.

It is no surprise that Lally’s protagonist is preoccupied by the shapes of letters and patterns of words as Lally herself demonstrates a careful attention to the sound of language in her novel. Lally balances her jaunty style with Vivian’s hilarious (while often heartbreaking) reflections on human interaction, which flow like poetry across the page. After talking on the phone with a salesman, Vivian narrates:

I press the phone hard into my ear. I think I can hear the sea in the distance, in a crackle and a hiss beyond the beep…I have the sea in my ear and my words for the day spoken and it’s not yet midday. (202)

Language is often a struggle that inhibits Vivian’s daily functions, but at other times it is the powerful force that facilitates meaningful moments in her life.

While the plot of Eggshells follows Vivian’s day-to-day life (Lally even includes small sketches that outline Vivian’s path at the end of most chapters), the novel is anything but ordinary. The first-person narration captures the intricacies of Vivian’s psyche as she explains, “I like the place where one thing meets another—that’s where magic gets in” (66). Vivian may not truly find the folkloric magic that she looks for around corners in Dublin, but different kinds of magic shine through many places in Lally’s novel. For example, when Vivian begins her journey searching for a friend named Penelope, she hangs fliers around the city that read:

WANTED: Friend Called Penelope. Must Enjoy Talking Because I Don’t Have Much To Say. Good Sense of Humour Not Required Because My Laugh Is A Work In Progress. Must Answer to Penelope: Pennies Need Not Apply. Phone Vivian. (15)

Though facilitated quite unconventionally, her initial meeting and subsequent blossoming friendship with equally odd Penelope bring a new kind of hope to the otherwise lonely and distant Vivian. After a phone call with her new friend, Vivian enthusiastically reflects, “I am in a friendship. I am a friend and I have a friend and this friend will come to my funeral” (103). The push and pull between Vivian’s desire to be alone in the comfort of her silence that has the “quality of marshmallows, padded with sugary dough” and her urge to connect with other people and her surroundings (and the risks that go along with this) forms the central tension of Lally’s novel (213).

Eggshells follows loveable characters on their amusing adventures, but glimpses of darkness punctuate the novel’s lighthearted tone and begin to contextualize much of Vivian’s behavior. As the novel progresses, Vivian reveals bits of information that expose a traumatic past. Remembering her father’s funeral, Vivian explains, “I didn’t cry when my father died; I cried while he was alive. I leave the mourners and make a wide skirt around the row where my parents are buried—my sister is the only loving daughter on the tombstone” (134). This painful recollection foreshadows the climax of the novel when, aided by Penelope, Vivian’s risky attempt to return to the otherworld goes wrong. After Vivian is scalded by boiling water, Penelope sees a number of older scars on her friend’s body. Perplexed, she asks Vivian where the scars came from to which Vivian replies, “My father tried to send me back. He wanted to swap me for his human child.” She thinks, “The new pain has mounted the old pain; it’s deep and all-consuming, a constant, bass-note throb” (241).

The interplay between Vivian’s humorous antics and her memories of a traumatic past distinguish Eggshells from other Irish narratives of childhood and family trauma. In deploying well-established Irish changeling lore in a new way, Lally’s novel engages with larger social questions regarding power in the Irish family, the ramifications of cultural belief systems, and the realities of those who may suffer as a result of those beliefs. In the end, Vivian is a triumphant young woman, demonstrating her persistence as she takes on Dublin one day at a time. Eggshells captures the complexity of friendship, family, and human connection, and speaks to the powerful hope that these relationships can provide an individual, whether or not they are a changeling.