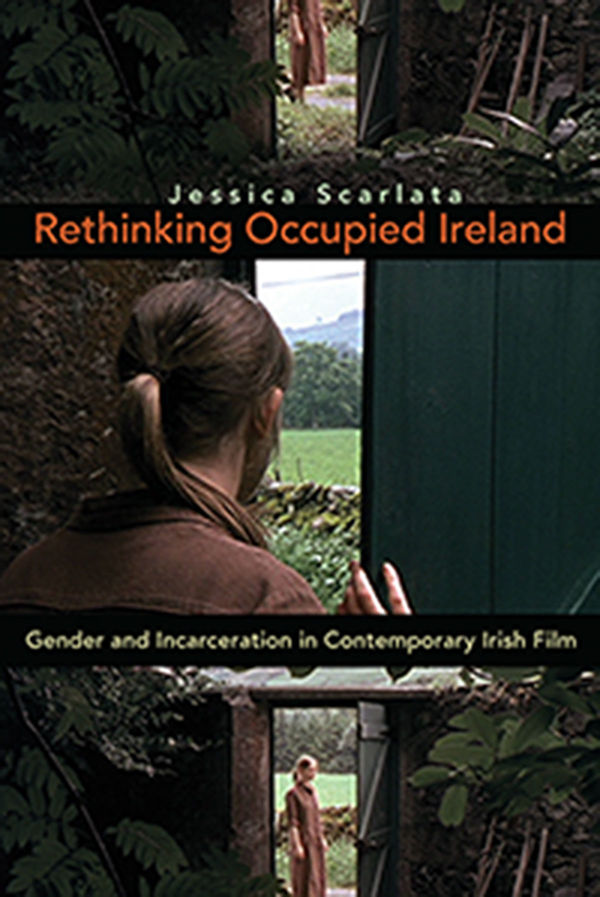 In Irish Studies, feminist theory exists in uneasy relation to postcolonial criticism. Ireland’s colonial legacy and its struggle for independence have shaped its “official” history to largely obscure the histories of other socio-political movements except where they intersect with the nationalist narrative. Subsequently, feminism is frequently framed as a subsidiary concern in relation to issues surrounding the “national question.” The question of whether aims of postcolonialism and feminism can be reconciled within the Irish example is a central concern in Jessica Scarlata’s Rethinking Occupied Ireland: Gender and Incarceration in Contemporary Irish Film. Scarlata uses the representation of spaces of incarceration in recent Irish cinema to compare what she terms “states of occupation” that persisted in post-partition Ireland. She further investigates the role of institutions (state, religious, and familial) in regulating the national image and reinforcing gender norms. Scarlata uses a comparative approach that successfully highlights affinities between Northern Ireland and the Republic of Ireland and avoids reinforcing common North/South binarisms. Characterizing her work as “a south-facing book,” she focuses on films set in Northern Ireland and frames those set in the Republic in relation to, rather than in opposition to, the situation in the North. In this approach, Rethinking Occupied Ireland distinguishes itself from other works on Irish national cinema (see McLoone 2000 and Barton 2004) that tend to devote more space to films from the Republic of Ireland and use these to frame Northern Irish films as points of contrast.

Rethinking Occupied Ireland focuses on ten films released between 1981 and 2008 that represent groups of Irish people who were considered threats to the dominant order and who were subsequently contained and incarcerated. Scarlata convincingly argues that these films constitute a form of political filmmaking. Consisting of both commercial and experimental cinema and ranging in tone from critical to melodramatic, this body of films addresses gendered histories in ways that simultaneously reinforce and resist hegemonic national narratives. Scarlata’s broad range of films simultaneously signals a potential limitation. Her decision to construct a canon on the basis of narrative focus (1980s occupied Northern Ireland, the 1981 hunger strikes, female republican prisoners, and the Magdalene laundries) obscures the significance of other factors such as film form, production context, and filmmakers’ nationalities. Even as Scarlata succeeds in drawing out original relationships between film texts, her work would benefit by having more critical attention placed on how other factors have impacted these films’ representations of Irish history.

Scarlata’s introduction frames Rethinking Occupied Ireland in relation to Giorgio Agamben’s (1998) concepts of the “homo sacer” and the “space of exception” as they have been developed within postcolonial studies. The figure of the “homo sacer” is one who is excluded from the normal bounds of the state and relegated to a discursive space at the limits of legality that Agamben terms the “space of exception.” Scarlata reads Irish carceral complexes, such as the H-Blocks and Armagh Gaol in Northern Ireland the Magdalene laundries in the Republic, as “spaces of exception.” Correspondingly, she theorizes individual bodies incarcerated within these institutions as “homo sacer.” Scarlata’s application of these concepts provides an effective framework for examining how political communities are defined and constituted through the social and spatial exclusion of particular segments of the population. She particularly succeeds in developing them further to examine the ways in which these dynamics of exclusion are specifically gendered and differently experienced by Irish men and women, as evidenced in her various case studies.

Following this introductory chapter, Rethinking Occupied Ireland consists of four analytic chapters. Chapter One examines how women living in occupied Northern Ireland in the 1980s were not only subject to government structures of control and surveillance, but also those of the Church and the local community. Scarlata draws from two radical Irish feminist films released in the 1980s, Maeve (Murphy 1981) and Hush-a-bye Baby (Harkin 1989), that undermine heroic accounts of nationalist history by revealing how republican patriarchy repeats colonial structures of oppression within its own community along gender lines. In line with Scarlata’s broader argument for how these films challenge a rigid, linear, and singular narrative of the past, these films’ narrative focus on female characters and their use of experimental formal and narrative strategies provoke a crisis of representation by presenting history as a current site of struggle that can be re-framed and altered through a shift in perspective. This chapter begins to unpack tensions around gendered politics of occupation and the allegorical function of the female body within nationalist discourses that are further interrogated in relation to republican prisoners and the penal system in Chapters Two and Three.

Chapter Two focuses on the representation of the 1981 hunger strikes and the H-Block prison cells in Some Mother’s Son (George 1996), H3 (Blair 2001), and Hunger (McQueen 2008). Scarlata uses their representations of simultaneously heroic and vulnerable masculinities to consider how the body of the hunger striker (the figure of the Blanketman) was transformed into a new allegory for Ireland’s subjugation and resistance that combined symbolic imagery with political agency. Using cinematic examples alongside historical accounts, Scarlata contrasts the corporeality of the prison protests (which produced a vulnerable male body in relation to the violence of the prison system) with the emphasis on martyrdom within Republican and Catholic rhetoric (which produced a heroic Irish masculinity representative of a transcendental Irish national power). For Scarlata, this contrast not only challenges dominant militant and hypermasculine portrayals of Irish male republicanism, but reveals how male republican prisoners were able to shift their “homo sacer” status by invoking the authority of an alternative set of laws: that of Irish nationalism and Catholicism.

Although Scarlata links the figure of the Blanketman with that of Mother Ireland in her discussion of gendered nationalist metaphors, she points out that the latter lacks political agency. In Chapter Three, Scarlata is centrally concerned with the role of Irish women within the nationalist struggle. Chapter 3 begins by re-visiting Some Mother’s Son to consider how the image of the mother within nationalist iconography reinforces the political agency of men while denying such agency for women. Scarlata then considers two films that feature female republican prisoners, Silent Grace (Murphy 2001) and Anne Devlin (Murphy 1984). She examines how they re-admit female republican prisoners into nationalist history as women rather than as mothers and how they appropriate heroic imagery and connotations of martyrdom associated with the Blanketmen for the female body. Scarlata links her discussion of the films to first-hand accounts of female prisoners’ experiences at Armagh Gaol in order to reveal specifically gendered tactics of domination, such as women being forced to strip in front of male officers.

While these first three chapters focus on categories of occupation in Northern Ireland, Chapter Four shifts to focus on the Magdalene laundries in the Republic of Ireland. Using two films, Sinners (Walsh 2002) and The Magdalene Sisters (Mullan 2002), Scarlata characterises the Magdalene laundries as an incarcerating institution that similarly sought to control and contain individual bodies. In doing so, she seeks to compare, rather than contrast, the structures of oppression in post-colonial Ireland with those in Northern Ireland. Yet even as Scarlata uses the figure of the “homo sacer” to align marginalised subjects across her four chapters, she distinguishes those women incarcerated within the laundries from republican prisoners in terms of their different relationships to nationalist discourses. Women incarcerated within the laundries were positioned as internal enemies of the state, and their oppression was sanctioned and sustained through the family and the Church. This chapter recalls Scarlata’s discussion in Chapter One by revealing the ongoing oppression of women in the service of Irish nationalism.

Arguably Scarlata’s strongest chapter, Chapter Four links her different case studies together by fleshing out earlier arguments surrounding gendered politics of occupation, the role of the female body within the constitution of the state, and embodied tactics of domination and resistance. By drawing the reader’s attention to this notion of similarity-in-difference, Scarlata proposes a form of border politics that is about relation as much as it is about separation. Although Rethinking Occupied Ireland is first and foremost a study of Irish cinema, Scarlata provides a historical framework that acknowledges alternative histories and excluded bodies as fundamental to the development of the dominant national narrative. Ultimately, Rethinking Occupied Ireland is a welcome contribution to the study of Irish cinema. As a feminist postcolonial intervention into Irish cultural studies, Rethinking Occupied Ireland has the potential to reach a wider readership interested in developing those intersections between postcolonial theory, feminist criticism, and gender politics.