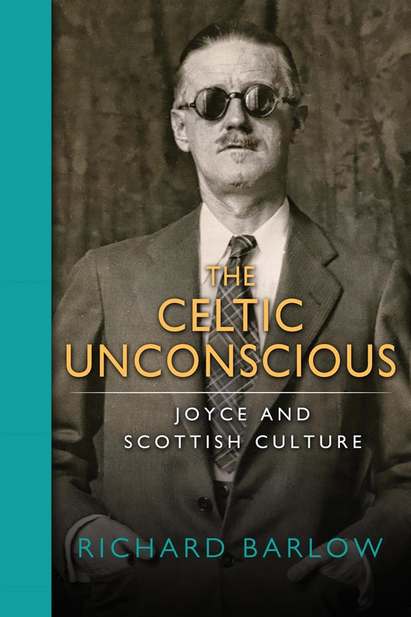 Richard Barlow’s new study is the first monograph to focus on the presence of Scotland in James Joyce’s works. It deserves attention: it is serious, erudite, thoughtful, and provocative. It offers a wealth of material, and rightly points out weaknesses in recent Joycean work that focuses on Joyce’s and Ireland’s relations to “Britain,” too often analyzed as an “England” writ large. But the book should also be handled with care: it can be laborious, and it frequently overstates its case. This is because it has a strong nationalist agenda (which is chiefly Scottish but also Pan-Celticist, or, more precisely, Scotto-Irish), and this brings a bias to many of its claims, methods, and guiding assumptions.

Until composing Finnegans Wake, Scotland had at best been a marginal presence on Joyce’s Hibernian horizon: a journey here (Freddy Malins’s mother crossing from Glasgow for the party of “The Dead”), a character there (Crotthers, one of the unpleasant medical students in the “Oxen of the Sun” episode of Ulysses). In the first chapter, Barlow covers these dutifully, if with a heavy-hand, before passing on to the main setting for Scotland in Joyce: Finnegans Wake.

Keeping his attention firmly trained on Scottish material, the rest of the book explores a range of fascinating and complex subjects, mostly literary, some historical, all of which surface in the Wake: there is a chapter apiece for the sceptical philosopher David Hume; for the “Caledonian Syzygists” James Hogg and Robert Louis Stevenson; for the historiographic cliché of the Picts and the Scots; for the fraudulent folklorist James Macpherson; and the great lyricist Robert Burns. Other aspects of Scottish cultural history (less glorious from a postcolonial perspective)—the works of the unionist Walter Scott, the Ulster plantations, the Stuarts in general—get a more cursory treatment, but are there.

Underlying Barlow’s attentive readings of Joyce’s playful engagements with these motifs (“a jackall with hide,” the “united states of Scotia Picta,” “Makefearsome’s Ocean”) is a serious agenda: that Joyce was constructing an idealist Celtic culture to attack a materialist “Anglo-Saxon” one. There is a constant nationalist position that the good examples of Scottish culture (as listed above) are valuable—and were valuable to Joyce—because they are Scottish; and that Joyce was interested in them in order to assist his Pan-Celtic/ Scotto-Irish cultural vision. “That Joyce believed Scotland and Ireland to be fundamentally linked,” as Barlow says in his introduction “will be demonstrated in the following chapters” (29). The word “linked” (like “relationship”) is vague: it could signal affection, mutual support, but also restraint. For Barlow, the linkage reflects a shared Celtic concern: “the Celtic spirit is always linked to incertitude and interiority” (22). Celtic culture in this book has a monopoly or dominating presence over these qualities. But if we cast doubt on that confident “always,” here, do we necessarily do so in a “Celtic spirit?”

Scottish culture, it is implied at points, is actually responsible for Joyce’s interest in interiority: “it is when Joyce attempts to describe mental interiority in a sustained way that Scottish culture becomes heavily involved in his work” (16). Even with the complexities that Barlow reveals in the figures in Finnegans Wake that he discusses, it’s still questionable whether Scottish culture is ever really “heavily involved” in Joyce’s work: the figures provide motifs that recur, but not much more than that. And the linkage here forces into view a very curious contention about when Joyce first began to “describe mental interiority.” We do not have to wait for Finnegans Wake for this, since we’ve already encountered it in his very first short story "The Sisters,” and it’s fairly constant from then on, blooming of course in Ulysses. Indeed, it’s questionable whether the texture of Finnegans Wake represents a mental interior at all.

Barlow’s research is a welcome sign that Finnegans Wake is becoming more richly interpreted and more central to Joyce’s legacy, as we learn more about its extraordinary intricacies. This legacy is, inevitably, contested, especially with respect to cultural and national identities, as Joyce becomes at once more Irish and more global, and as postcolonial critiques of cosmopolitanism and postmodern critiques of identity politics continue to battle it out in the review pages of academic journals. Barlow aligns himself in a “tradition” of more nationalist or postcolonial readings of Joyce, citing Vincent Cheng, Emer Nolan, Enda Duffy, Len Platt, and Andrew Gibson. He also combines this tradition, ambitiously, with psychoanalytic readings, drawing on Luke Thurston’s Lacanian and John Bishop’s oneiric readings of Finnegans Wake. There are some allusions to Joyce’s sources, but in general, Barlow eschews the more recent scholarly genetic approaches, which is a shame. It doesn’t help that some of the scholarship is itself questionable, skewed by the agenda.

For example, in his introduction there is a small but telling mistake, when he writes: “Upon completing Finnegans Wake, Joyce announced that ‘the war between England and me is over, and I am the conqueror’ (JJII, 693)” (qtd. in Barlow, 21). These are powerful words. But the framing is in fact wrong: Joyce’s pugnacious statement comes from an interview that Richard Ellmann had with the Danish writer Tom Kristensen in 1956. Joyce had become acquainted with Kristensen by chance on a trip to Copenhagen in 1936, a time which coincided with an announcement from The Bodley Head of a date for finally publishing Ulysses in the UK. The ban on Ulysses had been lifted. Joyce had good reason to be exultant, but the metaphor of being the “conqueror” is bombastic, and perhaps self-parodically boastful—but we can’t know, because we can’t hear the tone of Joyce’s voice as remembered by Kristensen in his anecdote recited twenty years after the event. As a remark in a private conversation, not repeated elsewhere, it can hardly be called an announcement. Moreover, the remark, crucially, was not made when Finnegans Wake was complete, which still had another three years to go. The sentiment is not in fact a reference to the purpose of Finnegans Wake at all, but to Joyce’s battle with British censorship. Barlow, an intentionalist, posits and twists a perceived function of writing Finnegans Wake into being a weapon in a “war with England,” because this is key to how he views Joyce’s project in his final book.

This problematic agenda is expressed at several points; for instance: “The characteristics Joyce associated with Celtic civilization are emphasized in Finnegans Wake at the expense of those he associated with Anglo-Saxon civilization” (25). Joyce’s 1939 book is, for Barlow, an extension of views that Joyce expressed in an article written in 1907, where he called the “vast Anglo-Saxon civilization…almost entirely a materialist civilization…(civilta materiale)” (qtd. in Barlow, 21-2). Barlow, pushing his point, has to stretch this material: “It is clear that Joyce sees the materialist/ materialistic ‘Anglo-Saxon civilization’ as being fundamentally opposed to the ‘Celtic spirit’” (22). But such a “fundamental opposition” is far from clear in the 1907 article, where, by contrast, Joyce says that it does no good to indulge in “acerbic invective” against the “tyranny of England” especially when that means ignoring “the tyranny of Rome” (qtd. in Barlow, 21).  Joyce’s resistance to the “spiritual” power of Catholicism is a feature of Joyce’s worldview, which is almost entirely absent from Barlow’s study. This is partly because internal matters of the “spirit” are virtuously in opposition to external materiality.

For Barlow’s argument about interiority to hold, Finnegans Wake has to be a dream, because it can then mean that we readers are always faced by the internal material that was put on stage so centrally by Hume, a Scot and Celt: “Joyce’s use of sleep as a ‘setting’ for the Wake functions as an illustration of his general conception that we as individuals are limited to the internal functions of the mind, caught in a Humean—and therefore, for Joyce, a Celtic—void of interiority and doubt” (21). There is much to unpack here: what is this Humean void? Hume was an empiricist, and his idealism was not consistently, if at all, of the ontological variety. The slippage of “Humean… as therefore Celtic” is a typical way of over-asserting the significance of “Celtic.” Joyce did sometimes do this, but he also mocked this very tendency when he used the words “Cultic Twalette” (344.11)  to mock the “Celtic Twilight,” a joke that Barlow chooses not to repeat. Since we’re talking of the pre-eminence of doubt and scepticism here, can we be sure that Joyce had such a “general conception” that we are “limited” to internal functions of the mind? Scepticism can cast its doubting nets at any kind of belief—materialist or idealist. And can we be sure that Joyce used sleep as a setting for the Wake?

Not knowing what Finnegans Wake is, and searching for some tag that will give it unity, critics have frequently reached for the “dream” hypothesis: “what if it’s a dream?” This has produced some interesting work (chief amongst them John Bishop’s Book of the Dark)—but it also dangles options of exploring enticing but unknowable terrains: the life of the dreamer which has led, along Freudian paths, to such a strange dream. But can we really treat these 628 pages as an actual dream of an actual person—expressive, say, of a split colonial subject, as Barlow does? To do so, alongside an argument that praises “an imaginative realm in total opposition to the external world of materialism” sounds oddly realist (28).

Barlow’s thesis reflects a contradiction at the heart of his argument, which, it must be said, is also a contradiction in Joyce’s view of the world. That is, Joyce fuzzily occupied a philosophical position of thorough-going scepticism, which put all states and forms of knowledge in doubt. At the same time, he also occasionally played games of crude cultural determinism, which analyzed people and their backgrounds, drawing on and raising up racialized and racist stereotypes.

Barlow acknowledges the contradiction but rather than try to deal with it head on, he chooses to accept Joyce’s deployment of stereotypes (“the Celt,” “the Anglo-Saxon,” “the Slav”) and then builds his argument upon it. Barlow’s readings of Joyce’s occasionally crude and reductive views on “race” (for which we now frequently substitute the word “culture”) can be even more crude and reductive. This is clear in his deployment of Joyce’s reading of Daniel Defoe’s Robinson Crusoe, where he ignores the extent to which Joyce admired Defoe’s realism against Christian Pauline idealism; and the way he banishes the English idealist William Blake to the footnotes.

There is still much work to be done interpreting the Wake, and Barlow is to be congratulated for getting a handle on the huge and complex prosework, and for engaging with the generations of criticism that have attended it. His book tells us that doubt is to be applauded as a Celtic virtue. Doubt is, without doubt, a critical virtue, whereas the “Celtic” is a doubtful category. I wish this book had applied to its own arguments more carefully some of the values that it rightly applauds.

*The allusion in this review’s title is to James Joyce, Finnegans Wake, 29.34.