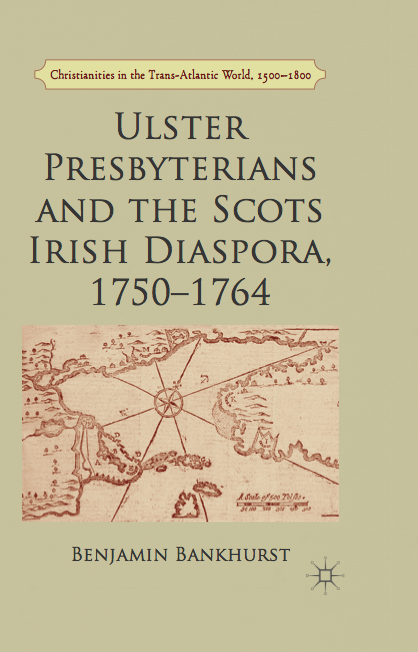 Ulster Presbyterians and the Scots Irish Diaspora, 1750-1764, is an interesting, well-written work by Benjamin Bankhurst. The book has an illustrious provenance, as a revised Ph.D. thesis at King's College, London, directed by Ian McBride, one of eighteenth-century Ireland's foremost historians. In addition, in 2013, it received the Donald Murphy Prize for Distinguished First Book, from the American Conference for Irish Studies.

In the book, Bankhurst's purpose is to examine "the dynamics of cultural identity formation" among Presbyterians in mid-eighteenth-century Ulster, thus complementing Patrick Griffin's The People with No Name (2001), a study of the same phenomenon among northern Irish emigrants and their offspring in colonial Pennsylvania (5). Bankhurst argues that in the mid-1700s, several social developments converged to reshape northern Irish Presbyterians' conception of their relationship to the wider world. First was the expansion of trade—in Irish linens, colonial flaxseed, and Irish emigrants and servants—between the North of Ireland and Britain's North American colonies. Second was the formation of transatlantic kinship networks through increased emigration and emigrants' correspondence. Third and most dramatic was the Seven Years War, which in North America (including Pontiac's postwar rebellion) lasted from 1754 to 1764.

According to Bankhurst, the War impacted Ulster Presbyterians in several ways: it depressed the linen trade and suppressed emigration; but it also stimulated a flood of sensational news and propaganda from and about wartime North America, published especially in the Belfast News-Letter, Ulster's principal newspaper. In turn, those press reports heightened Ulster Presbyterians' awareness of, and empathy for, the sufferings of their kinfolk and former neighbors on the American frontier, under attack by the French and Indians. Finally, Bankhurst argues that the War and its press coverage deepened their identification with, and burgeoning enthusiasm for, the British Empire. This increased popular loyalism was the result not only of Britain's military victories; more profoundly, it was because Ulster Presbyterians interpreted those victories (and the earlier defeats) in the same providential terms—of global conflict between the "Protestant cause" (59) and the Papal Antichrist—which framed the myths of their own ancestors' past struggles, as in 1641, against Ireland's Catholic "natives."

This is an important thesis, in part because modern scholarship on Ulster Presbyterians in the early and mid-eighteenth-century, prior to the Patriot and United Irish movements of the 1770s-90s, is sparse. However, Bankhurst may have been obliged by publication pressures to overly reduce and simplify his doctoral thesis, because Ulster Presbyterians and the Scots Irish Diaspora has several evidentiary and conceptual flaws. While Bankhurst's basic argument, that wartime news did augment greatly Ulster Presbyterians' empathy with their American kin, seems persuasive, it's questionable whether Bankhurst presents sufficient evidence to support some of his key interpretations. In chapter 5, for instance, Bankhurst contends that Ulster Presbyterians' heightened identification with their colonial cousins, resulting from the Seven Years War, generated the former's increased donations to fund-raising appeals by visiting Scots-Irish emissaries from America. However, the conflicting data make it less than certain that those postwar supplicants actually collected significantly, if any, more money in Ulster than did their pre-war counterparts. Also less convincing is his broader, vaguer thesis that the War "forced Ulster Presbyterians to reassess their relationship with the British Empire ... [and] to re-evaluate what it meant to be both British and Protestant in an expanding Atlantic world" (9). This seems problematic for several reasons. First, Bankhurst never describes Ulster Presbyterians' pre-war relationship to the Empire, or their pre-war understandings of Britishness and Protestantism; as a result, it is uncertain how profound were the changes that the War allegedly caused. Second, it remains unclear whether Ulster Presbyterians' increased identification with their emigrants' wartime suffering also facilitated their transformation, as Bankhurst argues, into "enthusiastic [British] imperialists" (e.g., 53, 110).

Of course, there are several ways that that argument can be sustained. One is to downplay evidence validating Ulster Presbyterians' traditional reputation among English and Irish Anglican officials as "'totally republican and averse to English government,'" as the duke of Bedford, Ireland's lord lieutenant, claimed in 1759 (75-6). Another is to obscure distinctions between Presbyterians and other Irish Protestants, especially Anglicans—the members of the legally-established Church of Ireland, who monopolized landownership and political power, who were therefore most likely to be "enthralled with the idea of empire" (45), and whom ordinary Presbyterians generally detested as receivers of their hard-earned rents, tithes, and taxes. Inadvertently, Bankhurst generates such confusion by citing prominent Anglicans, such as Arthur Dobbs of County Antrim and North Carolina, as exemplars of Presbyterian opinion, but also by employing as synonyms for Ulster Presbyterians generic terms such as "Irish Protestants," "the Irish," and even "Ireland" (e.g., 33, 45, 53, 91, 110, 136-8).

Yet a third way to identify mid-century Ulster Presbyterians as loyal imperialists is to minimize their internal social and political divisions, which often found expression in words and actions that evinced the kinds of alienation from an "imperial order" that the community's more "respectable" (and anglicized) spokesmen, such as the Belfast News-Letter's publishers and the clergymen dependent financially on the government's regium donum (which Bankhurst surprisingly does not mention), wished to promote. Despite their efforts, however, 1754-64 was scarcely a passive and unambiguously patriotic decade for Ulster Presbyterians and other Protestants whom Dublin Castle distrusted. In 1754-57, the Money Bill crisis convulsed Protestant public opinion, followed in 1759 by the anti-union riots, led (according to Bedford) by working-class Dublin Presbyterians, and culminating in 1764 with the Oakboy riots by south Ulster's Presbyterian tenant farmers. To be sure, Bankhurst mentions these divisions and disturbances, but they scarcely qualify his overall interpretation of cultural homogeneity and political loyalism.

Moreover, although Bankhurst argues that “[i]dentity formation in Ulster ... was a process spurred by social change” (5), his analytical shift midway to “cultural discourse” (92) not only slights social (as well as cultural) differences among Ulster Presbyterians but also obscures the distinctions that historians still normally make between historical mythology (or wartime propaganda) and empirically verifiable information. Surely, for instance, there must be some way to alert an unwary reader of the fact that merchant John Black’s assertion in 1641 that Irish Catholics murdered 150,000 Protestants on his family’s Armagh estate alone (much less in all Ireland) is not remotely credible (92)?

More broadly, this reviewer remains uncertain as to Bankhurst's principal interpretation and its location in the historiography concerning Ulster Presbyterians' relationships to the dramatic political developments that culminated in the United Irish Rebellion of 1798 and the Act of Union of 1800. The strongest impression conveyed is that this book typifies "revisionist" scholarship—that is, the anti-nationalist (or at least anti-republican) paradigm that has dominated Irish historical studies since the mid-1900s, especially since the “Troubles” in Northern Ireland began in 1968-69. Indeed, Bankhurst’s own frequent remarks (echoing revisionists’ common complaints) that, in their adherence to an allegedly "romanticized" nationalist narrative, scholars have ignored northern Presbyterians’ imperial patriotism, would suggest that characterizing his book as revisionist, or even as “new unionist,” would not be unfair (e.g., 7, 53. 58, 75-6, 138).

To be sure, there is some validity to an imperialist interpretation of eighteenth-century Irish political culture, as there is no doubt that Britain’s Empire greatly expanded career opportunities for Ulster’s (and Ireland’s) Protestant bourgeoisie. Irish loyalism (like nationalism) always has had material foundations as well as cultural expressions. Nevertheless, a revisionist reading of Bankhurst’s book leaves this reader wondering how and why many Ulster Presbyterians could make such a rapid transition from their reputedly enthusiastic British imperialism of the 1750s-60s, to the critical and democratically inclined Irish “patriotism" of the 1770s-80s, and finally to the Irish revolutionary republicanism of the 1790s. Put another way, when the war-driven imperialism of the 1750s-60s (emphasized by Bankhurst) is book-ended by the resurgent and also war-driven unionism (as heralded by revisionist historians Alan Blackstock, John Bew, and Jonathan Wright) after 1800, they effectively (and perhaps intentionally) "squeeze" Ulster Presbyterians' "republican moment" into an anomalous and insignificant millisecond.

And yet, running alongside that interpretation, but much less prominently, is another thesis with quite contradictory implications. On pages 3, 7, 58, and 133, Bankhurst suggests that the Seven Years War’s most important result was that Ulster Presbyterians' closer attention to their transatlantic kinfolk and to imperial affairs led subsequently to sympathy and support for the American colonists in the latter's conflict with Britain that in 1776 culminated in revolution and independence. Indeed, as early as 1767, Bankhurst argues, Ulster Presbyterians' support for British imperialism had "collapsed" (112), replaced by sentiments that would have profoundly destabilizing and democratizing effects on northern Irish society and political culture. As an early example of what the CIA would later call "blow-back," wartime imperial integration generated postwar anti-imperialism (and nationalism) on both sides of the ocean—albeit only temporarily, until violently suppressed, in Ireland. Now this is an innovative, intriguing, and persuasive interpretation—one that goes far to justify the outrageous price with which Palgrave Macmillan has burdened Bankhurst’s book.