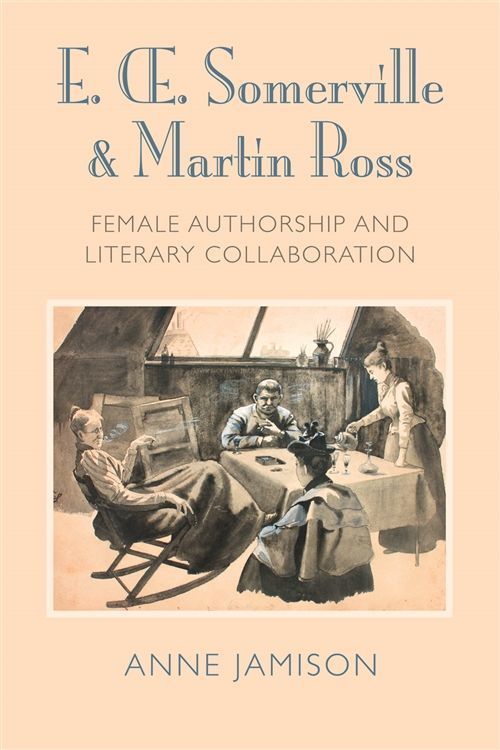 In January of 1886, Edith Somerville (1858-1949) met her eventual companion and writing partner Violet Martin (Martin Ross) (1862-1915) for the first time. (They were cousins but lived in different parts of Ireland, West Cork, and Galway, respectively.) Given their long and celebrated personal and professional relationship, it is extraordinary to think that Somerville’s first impression of Martin, as noted in her diary, is that her cousin’s skill at parlor games helps to offset “a most flabby & dull being.”[1] However, a few weeks later, she revised her opinion somewhat, allowing that she is “a good sort … tho[ugh] silent, & very English!”[2] For her own part, Martin neglects to record their meeting at all, and the first mention of Somerville in her diary occurs nearly six weeks into their acquaintance. Despite this unpromising beginning, the two would go on to establish a collaboration that produced more than a dozen books, and a friendship that lasted until Martin’s untimely death and even beyond, as Somerville insisted. Though the word “collaboration” appears in the subtitle of Anne Jamison’s new study of Somerville and Ross, E.Œ. Somerville and Martin Ross: Female Authorship and Literary Collaboration, the book presents their friendship as equally important and, indeed, as inseparable from their professional endeavors. Jamison argues that the cousins’ bond subverted a number of traditional ideas, including the notion that real friendship was only possible between men. She cites Virginia Woolf’s complaint in A Room of One’s Own (1929): “I tried to remember any case in the course of my reading where two women are represented as friends” (Qtd in 44). And Somerville, in her 1918 reminiscence, Irish Memories, asserts that

[t]he outstanding fact, as it seems to me, among women who live by their brains, is friendship. A profound friendship that extends through every phase and aspect of life, intellectual, social, pecuniary. Anyone who has experience of the life of independent and artistic women knows this; and it is noteworthy that these friendships of women will stand even the strain of matrimony for one or both friends.[3]

Of course, neither woman ever married; as Somerville says in the same book, “[t]o Martin and to me was opened another way, and the flowering of both our lives was when we met each other.”[4] For the two cousins, their friendship, invaluable in itself, was also the necessary ground for their writing collaboration to flourish.

Jamison rightly censures critics and biographers who have “interrogated the partnership with a view to dismantling it, opposed to understanding the two women’s bond as a realisation of a new type of authorship” (45). After winning fame, especially from the “Irish R.M.” stories, the writers found themselves plagued by interviewers and admirers asking about the division of labor in their writing process. As Somerville remarks in a letter, “it’s the books that matter, not who held the wretched pen” (Qtd. in 46). Such inquiries were often made with the supposition that Martin was the senior, more talented, partner in the enterprise, a view supposedly confirmed by the comparative inferiority of most of the works Somerville published during the nearly thirty-four years that she survived her cousin. Jamison, however, sides with Somerville and Ross themselves, who maintained that, together, they were capable of something that neither could have produced alone; Somerville, who had a parallel career as a painter, says in an interview, “It’s rather amusing that we have three separate styles, which have developed themselves unconsciously. There is our joint style, Miss Martin’s own style, and mine. It’s like blue and yellow which together make green!”[5] In recent decades (since the 1968 biography by Maurice Collis), another sort of interrogation of the relationship, focusing on the two women’s sexuality, has proceeded apace. Jamison (wisely, I believe) offers a corrective to this line of inquiry, arguing for an approach which “neither denies nor promotes the possibilities of lesbian attachment, and thus avoids the empirical investigations of sexuality which have consistently marred critical attempts to explicate the nature of Somerville' and Ross’ authorial and sentimental bond” (67-68). She holds that a more productive strategy that foregrounds the women’s friendship, acknowledging its erotic potential but at the same time placing their “intellectual passion” at the heart of the relationship, especially as they talked and argued out the books between themselves. Collaboration in this context becomes a form of conversation (though often conducted by letter, as family obligations kept them apart), and a conversation sometimes marked by disagreement; as Somerville writes to Martin, anticipating their next writing session, “Please goodness we will have many a tooth and naily fight next month …” (Qtd. in 77).

Jamison’s work points out how, during their lifetimes and after, Somerville and Ross have been triply devalued as women writers, as purveyors of comedy and, perhaps most relevant to her inquiry, as collaborators (as opposed to single authors): three categories which have traditionally attracted scant respect from critics and canon makers. As collaborators, the cousins subvert the notion of “the sanctioned singular author figure” (12). In what proves to be her most valuable contribution, Jamison in her first three chapters, does a thorough job of contextualizing their partnership, and the phenomenon of collaboration generally, in terms of copyright law and the ownership of literary property; of Romantic notions of the solitary genius (making use here of Wordsworth and Coleridge’s Lyrical Ballads); and of the demands and perils of the late-nineteenth-century literary marketplace. All of these enrich the reader’s appreciation of the works of Somerville and Ross, and convince her of the truth of Jamison’s claim that collaboration is a “literary practice central to any critical understanding of their writing” (9).

However, I suspect that the fourth and fifth chapters (on the duo’s travel writing and on Somerville’s interest in spiritualism, respectively) will not sustain the same degree of interest for most readers as the earlier ones. In the first instance, Jamison examines at length Somerville’s and Ross’s 1893 account of a journey in the west of Ireland, Through Connemara in a Governess Cart. While their travel writing has, I believe, received too little attention, it is not immediately clear to the reader why this particular text was chosen, nor is a compelling case made as to how it fits the author’s larger purpose. In the final chapter, Jamison considers how Somerville’s involvement in spiritualism and “extra-mundane communications” led her, after her partner’s death, to seek to continue their collaboration through the medium of spirit writing, and while this topic may attract a certain interest in itself, it is difficult to see how it adds a great deal to one’s reading of the texts. Also, there are a number of minor errors: for example, The Silver Fox (1897) is at various points described as the second, third, and fourth novel by Somerville and Ross (the last is correct). And, in a work centered on literary collaboration between women, Jamison curiously chooses to efface the name of one of her two principals, invariably referring to the younger writer by the masculine pen name of “Martin Ross” (or simply “Ross”) rather than her real name, Violet Martin. (This is particularly jarring when Jamison employs the pseudonym in introducing a quotation in which Somerville then uses her partner’s actual name.) However, none of these points significantly detracts from the quite useful contribution Jamison makes to both the study of Somerville and Ross and to the growing literature on female literary collaboration. After the death of her friend, Somerville wrote, “no one can ever know what we were to each other” (Qtd. in 47). Nonetheless, Anne Jamison has given us valuable insight into that friendship, and into the works that grew out of it.