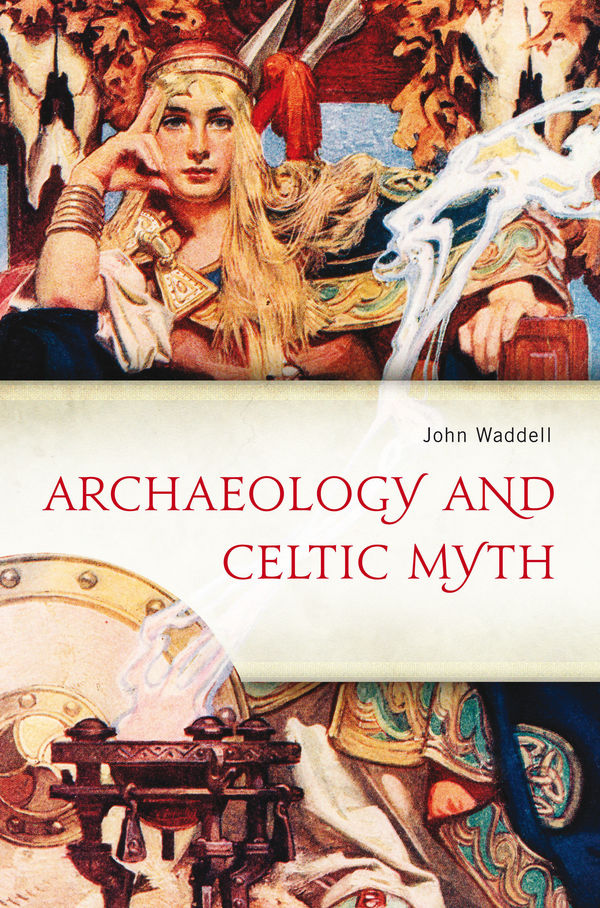 T.F. O’Rahilly, the well-known early Irish historian and author of Early Irish History and Mythology, was very critical of archaeologists whom he described as, “by nature, optimists” who were tempted to wander into unfamiliar fields.[1] In Archaeology and Celtic Myth, the archaeologist, John Waddell, shows himself to be one such optimist, and his innovative approach benefits the discipline of archaeology. While T.F. O’Rahilly believed that “the Otherworld is impervious to archaeological exploration,”[2] Waddell explores the idea that “the prehistoric Otherworld is not as obscure and archaeologically elusive as one might think” (166) by merging the insights of archaeology and mythological studies together in a single work.

Rathcroghan, one of the sites discussed, is an ideal location from which to explore the close link between archaeology and myth. It is famous in myth as the royal seat of Maeve and Ailill and the place where the Táin Bó Cuailgne story begins. It has also been described in the Annals of Connacht as the place where Feidhlim Ó Conchobhair was inaugurated in A.D. 1310. A flat-topped mound surrounded by an enclosure lies at the center of this archaeological site, which consists of sixty national monuments. The other monuments include linear earthworks, ringforts, ogham stones, mounds, and limestone caves. The book also includes discussions of other royal sites, with similarities to Rathcroghan, such as Tara and Emain Macha.

Rathcroghan serves as a metaphor for landscape and its importance, not only in the building of archaeological monuments, but also in the telling of stories about the landscape. According to Waddell, Oweynagat (the Cave of Cats) in Rathcroghan was the focus for cult practices in pre-Christian times that included “sensory deprivation, and altered states of consciousness associated with divination, oracular activity and warrior initiation” (68). The inferring of altered states of consciousness in pre-historic archaeology is complex. However, there have been studies of the motifs used in megalithic art of the Neolithic period, where it has been suggested that the art motifs were similar to those seen by a person in an altered state of consciousness.[3] While these motifs were consistent across place, culture, and time, their interpretation was culturally informed.

Waddell’s interpretation of archaeology in this book is informed by anthropological studies on prehistoric religion, art and the prehistoric mind. The human need to express the deepest mysteries in life in symbolic language has persisted across the millennia. If one thinks of the Otherworld as the subconscious, one accesses it through ritual, religion, and art. The otherworldly beliefs of prehistoric people found expression in the construction of funerary monuments and also in the creation of high-status objects of precious materials. Archaeological monuments are ultimately a testament of man’s place in, control of, and possibly ownership of the landscape. A continuity of use of archaeological monuments in the landscape suggests a certain continuity of beliefs, or at the very least, a recognition of an ancestral space as a sacred location.

The telling and retelling of stories is also anchored in landscape. Much of this can be seen in Waddell’s examples of Irish myth, the majority of which link the Otherworld to specific site locations in the Irish landscape. He believes “there is an abundance of evidence that the Otherworld was a major concern of the prehistoric mind” (166). In the case of Newgrange passage tomb, for example, the architecture of the monument reflects prehistoric beliefs about the sun. During the winter solstice, the sun shines in through the roof-box, lighting the passage way and the chamber within. Waddell engages in further interesting discussion on solar symbolism depicted on metalwork, including the Petrie crown and a pair of bronze discs from Monasterevin, Co. Kildare. The motif of a solar boat carrying the sun across the heavens has also been found on British metalwork such as the Battersea shield, dated to the last century BCE. The author concludes that there is evidence for “a connection between solar imagery and the Otherworld” (167).

With regard to concepts such as sacral kingship, as enunciated in the medieval literature, Waddell notes that “there is no denying the difficulties of recognizing this phenomenon in the archaeological record” (xiv). However, the concept of sacral kingship, including the belief in the sovereignty goddess and the centrality of horses from the literature of Irish mythology, have Indo-European origins and can be illustrated by some rich prehistoric burials found in Europe. One famous example is the Iron Age burial at Hochdorf in Baden-Wurttemberg, Germany containing a tall adult male lying on a bronze couch. He has a drinking and feasting set which includes nine drinking horns. He also has a four-wheeled wagon, horse-equipment, tools and personal ornaments. A large bronze cauldron which had once contained mead and a golden cup are placed at his feet. In the Irish story Baile in Scáil ("The Vision of the Spectre") the goddess of sovereignty offers a drink to Conn of the Hundred Battles to grant him the kingship of Tara. This is an example where mythology complements the interpretation of the archaeological evidence and material culture adds a new dimension to a story. The goldwork found at Hochdorf, which includes a sheet gold collar, suggests that the incumbent may have been a sacral king. Only a person of very high status would be given such a rich burial with prestigious grave goods.

The idea that archaeological monuments such as mounds were portals or ways of accessing the Otherworld is a common theme in mythology. The centrality of such a belief is reflected in the names of archaeological monuments that appear in several Irish mythological stories. Waddell explains that a story located in a particular monument or ascribed to a mythological figure retains its essence across tellings, but is often adapted to reflect a change in a belief system over time. This is an example of what the author refers to as the “malleability of myth” (141). He gives an example from the ninth-century text, Cath Maige Mucrama (“The Battle of Mag Mucrama”), in which a story is told about Lugaid Mac Con, King of Tara, giving an unwise judgment that results in the collapse of two large burial mounds, known as the Claoinfhearta or Sloping Trenches. In another version of the story, this time inflected with a Christian theme, the collapse is attributed to an earthquake after St. Patrick’s charioteer was killed. Waddell also highlights more direct connections between myth and archaeology of a similar vein. For example, the dedication to Fraoch in the roof stones of the souterrain at Oweynagat can be related to an eighth-century tale entitled Táin Bó Fraích (“The Cattle Raid of Fraoch”), which suggests the importance of this legendary figure to the builder of the monument.

In the medieval period, establishing political claims to land and territory became increasingly important, and archaeological landscapes and myths were used in the service of political ambition. Tara, because of its ancestral prestige as a site of authority, was used to validate claims to power. Waddell explains that it was the “mythological qualities” of these monuments that made them “attractive sources of supernatural legitimacy for emerging political entities” (164).  In the story Echtra mac nEchach Muigmedóin (“The Adventure of the Sons of Eochaid Muigmedóin”), for example, Níall Noígíallach (“Niall of the Nine Hostages”), ancestor of the Uí Néill dynasties, wins the kingship of Tara. He and his brothers are thirsty and one after another they come across a well that is guarded by a hideous hag who demands a kiss in exchange for a drink of water. All except Niall, the rightful king, refuse. The hag turns into a beautiful young woman and is identified as the sovereignty goddess who has the power to confirm Niall’s entitlement to the kingship of Tara. This use of myth legitimized the claims of the Southern Uí Néill to the sovereignty of Ireland. Similarly, accounts of the monuments of Tara included in the twelfth century version of the Dindshenchas linked major Irish monuments to important ancestral figures.

Stories, being rooted in the landscape, grant place names an important status in Irish mythology. Stories are passed from generation to generation and contain essential truths about humans and their place in nature. Both humanity’s understanding of the monuments themselves and its explanations of their meanings as contained within the tales are important objects of study, both of which are given careful attention throughout Waddell’s new book. Human agency in prehistory can be difficult to interpret but stories sometimes provide insight into the human condition and the use of ritual activity in the struggle to survive. The construction, in particular, of the large-scale monuments in strategic locations in the Irish landscape form a statement of human intent as well as an assertion of the importance of humans in the cosmos. This is expressed through knowledge of engineering and astronomy, an understanding of the forces of nature, and an attempt to appease the gods of nature in order to retain equilibrium between the natural world and the Otherworld. All of these sentiments are contained in stories and anchored to monuments in the landscape, connections which Waddell highlights in refreshing ways throughout Archaeology and Celtic Myth. These beliefs may also account for the phenomenon mentioned in the book of the incorporation of earlier monuments into new enclosures, such as at Ráith na Rí in the Tara complex, a process described by the author as “a deliberate reference to ancestral acts real or imagined” (129).

Critics in the past such as O’Rahilly have dismissed attempts by archaeologists to enrich the interpretation of their data by complementing their results with findings from other disciplines such as early Irish history and mythology. While Waddell clearly disagrees with this opinion, he does acknowledge the difficulties inherent in his new approach and that, as a prehistorian, he leaves himself open to the charge of trespassing in other disciplines. However, he does believe that abstract ideas such as sacral kingship “deserve to be seriously considered in any discussion of possible socio-political structures in prehistoric Europe” (165). A site, such as Tara, for example, has a very rich mythical past that has intersected in tangible ways with the political history of early Ireland. Interdisciplinary studies of the mythology, archaeology, and landscape of Tara has enhanced the interpretation of this complex site.[4]

The interpretation of human behavior, of which archaeological monuments and artefacts are the material expression, can certainly benefit from Waddell’s novel approach of melding archaeology and mythology together. Indeed, a symbiotic rather than a mutually exclusive approach might enhance interpretative possibilities in both the disciplines of archaeology and mythology. The imaginative, the creative, and the religious mind of prehistoric humans, expressed particularly through funerary monuments and decorated ritual artefacts could best be understood through a broader, rather than narrower, interdisciplinary lens. Waddell is to be commended for sticking his archaeological academic toe into the “otherworld” of imaginative story and emerging with more roundly-developed insights into the meaning of ritual activities of people who lived in the distant past and left their lasting marks on the Irish landscape of today.

[3] David Lewis-Williams and David Pearse, Inside the Neolithic Mind: Consciousness, Cosmos and the Realm of the Gods (London: Thames & Hudson, 2009).