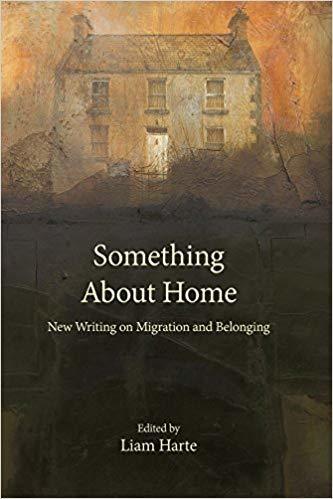 “Are there things to declare?,” they ask you at customs. Well, I have a couple. The first is that I think Liam Harte is a god. Feels good to unpack that one, and the other is I am second generation, born to Irish parents in England. So much for my objective perspective. Nonetheless, I disembark and am granted safe passage into this place I find myself at. Neither one place nor the other; it is a hard destination, a place impossible to send postcards to or from—for which direction is home now?

Something about Home: New Writing on Migration and Belonging is the result of a generous project that drew work out from a range of writers, some of whose life experience was valued more than its manner of expression. This kindness is its own reward, however; it has produced a collection which, while patchy in places, is a celebration of the urge to communicate above all. This sense of needing to write something out of oneself is given much weight in this collection. However, gone is the patronizing touch, the standing apart from; instead, Harte’s collection offers a genuine piecemeal work from people at different stages in their development entering a period when everyone is a writer (only of course everyone isn’t) with instant blogs and self publishing. The more professional authors stand out, but also stand back to allow this rush of writing to fill the pages. Giving support and encouragement to fill in gaps in any literature is always going to produce shaded works, but this book is nuanced and marshalled.

Harte’s introduction does not put a foot wrong. It eloquently expresses the tussle people experience daily. He assembles his global sources to support his assertion that traveling away from home allows the traveler to view the site of belonging with a fresh eye, while making a genuine case about the effects of loss of all familiar recognitions (2).

We leave, but have no wish to become “the other.”

Like that person who, when Teresa May entered into agreements with the DUP with their anti–gay and anti-abortion agenda, stood outside Westminster holding up a home-made banner: “Came here to get away from that shite,” many in this collection describe how they walk that uncomfortable path of loving the place of home, but knowing it does not love them in return.

There is sometimes a cosyness which creeps in, a nostalgia and the view that everything was better in the past, but the main urge behind most of the pieces in this collection is an acknowledgement of the economic forces at work, the dislocation of experience, the issues of belonging, and there is also the occasional joy of being somewhere different, away and free from old restraints.

As an author who has the strange accolade of being “genuinely inauthentic,”[1] a hybrid, I understand the tussling between belonging and never being at home. Others might call themselves “Irish, born in England,” but I’ve never felt entitled to belong in either country, regardless of my sense of identity. Migration as an accepted way of life always seemed to be part of who we were, and I only understood this as part and parcel of Irishness once I realized how different my upbringing had been to others around me who had English parents.

Like John Walsh in The Falling Angels, I am similarly between two places—"caught between two cultures, between the Anglo Saxon and the Celtic, between…god fearing…decencies and the careless pagan.” However, Walsh equally describes the sense of not belonging that many in this collection claim, which is a common feeling despite where they were born; “Eternally in transit between one place and another…never finding a real home.”[2]

Most of the authors in Something about Home, such as Arleen Hughes and Patric Slevin, are between stages of absorption and return, having left a home. I envy their claim to it. There are others, second generation, including Susan Graham, and Martha Ashwell, constantly negotiating their identity. Different problems, shared histories. A volatile mix.

Those who long for home, resort to individual gestures—a woman who will never buy soda bread from Tesco now that it has started stocking it, and who feels the bread carried from home “turn(s) green, tainted in the English air,” which serves as an odd image of nationality rendered to mould (Arlene Hughes 132). Susan Graham’s Cockney speaker reckons the airport is the closest thing he has to call home (85), and Ruth MacNeely, in “Becoming Other,” explores the change of perception experienced when a child of Irish parents tries to understand how she fits in (“…she was not a dog…not black but she did not know what Irish was”). She pieces her identity together in a house which “was not home” (75). There are a lot of tropes worked here; poverty, the casual cruelty of children, religious difference, and MacNeely’s piece ends suddenly without resolution, indicating possibly that this state is never over. Patric Slevin, in an impressionistic piece, cannot resist the line “he’s from England,” overheard by the narrator as he shoulders the coffin of a relative, back home (122).

Mike McCormack, in “Six Snapshots of Emigration,” celebrates the culture of emigration that has turned the gaze outward, made it global (52), and it is this expansive view which John McAuliffe seeks, aware that this project both negotiates and challenges “the point where the sharp edges of national identity could do their most limiting and imagination-deadening work” (104) “[W]e all wrote very differently in relation to what it was we had in common,” he notes (101).

McAuliffe recognizes the backward-forward movement (in this instance between Manchester and Ireland), which informs his poetry sequence (represented here in “Vague Urania”). It also allows two different places to exist and be experienced simultaneously, revealing thought patterns of displacement  and offering a reality where memory and history disrupt and equally enhance the present.

the former factory, Hans Knit,
Is a mosque with tall weeds and a Friday crowd,
Laced trainers and starlings on a redundant line. (105)

And yet Eva Gore Booth still walks along Manchester’s streets in an uncanny imagining where she views the city as “An outpost of the future,” which could sum up a common response true to all who have experienced such dislocation.

McCormack reports on a discussion with a focus on material comforts as a catalysis: “was the experience of emigration kinder to women than it was to men?” (51). The men and women (middle-aged and upward) who took part in this reported that this was so (52). The man who had raised the question had the evidence of his own family to show that wives were less happy to return. Such gendered responses and experiences of emigration fluctuate within life spans. While the desire for material betterment may be true of those who came in the first half of the 20th century, with the next spike in immigration, the 1980’s with the referendum and attack on women’s rights, many women decided to leave in order to live unfettered lives rather than stay for financial gain. Ann Marie Towey in “Mayo Votes” refers to this choice in the run up to the vote, describing a mass where a priest claims that while everyone has their democratic rights, he is able to order how the congregation must vote. Then she shows that no-one gives the appearance of having listened to a word he has said (121). The parents she describes here show the male-female divide expressed in the discussion—a mother only remembering “the grueling life of work on a farm” and a father “obsessively nostalgic” (120). This book does not claim to answer such disputes but sets up questions and allows the reader to spot the attitudes seen in the lives imagined and written.

About religious divides, Moyra Donaldson writes, “no matter how we may see ourselves, to most people in England we are all Irish,” but she recognizes the differences beneath the surface (14); “…how hard it is to escape such dividing and defining categories,” as McAuliffe comments, but even so these identities are fixed on the present and the dawn of new days, not yesterdays, where a return to home shows a different place, one which like ourselves has changed as it moves forward to an uncertain future (104).

For Harte’s introduction alone, this book would be worth reading; however, there is far more packed into its pages, in the questions raised and the new work it brings to an audience. Harte never miss-hits and his interest and focus is always firmly placed. His keen mind continues to examine work produced by the Irish in all their differences and evolutions. He avoids the tight, tidy descriptors and leaves us to find our place through the varied ways our lives have been written, imagined, and re-imagined. Harte notes that for the “creative migrant…the assets tend to outweigh the liabilities,” and he is dead right again (2). Writers always need to look back in order to look forward, in order to examine life anew. This book deserves attention.