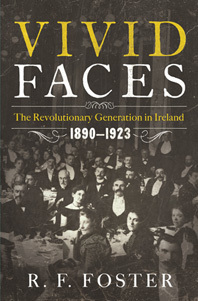 The title of Roy Foster’s book is filched from W.B. Yeats’s poem, “Easter 1916,” a touchstone of the Irish cultural debate, and never more so than during this centenary year of the Rising. Yet the purpose of Foster’s study is to kick away some of the foundational ideas that Yeats’s famous verse articulates. For one thing, Yeats’s poem declares that the rebels bore “Hearts with one purpose alone.”[1] But Foster has mined the copious archival material associated with dozens of these insurgents and instead places these individuals in a rich and varied world of intellectual and social tumult. Foster’s rebels aren’t simply fixated upon a narrow Irish-Catholic nationalism, but are stimulated by an interlaced set of radical and cosmopolitan ideas. Thus, Vivid Faces is less concerned with how Thomas MacDonagh and Patrick Pearse spent time pondering whether to become ordained priests and more with how Constance Markievicz traveled to London Art School, how Rosamund Jacob pored over Freud, and how a number of rebels may have been qualified to join Roger Casement in penning homosexual diaries.

For another thing, in “Easter 1916” Yeats’s list of named rebels is an entirely male one. True, Yeats does allude to Constance Markievicz (she is “That woman” in the poem). But the climactic catalogue in Yeats’s poem is that of “MacDonagh and MacBride / And Connolly and Pearse.”[2] Foster, on the other hand, takes issue with the assumption that women were somehow marginal to the Easter Rising. By contrast with many gun-and-guts accounts of the military combat, Vivid Faces strives to show how the shared cultural activity of the preceding period depended on many women, whose work formed part of an important confluence of unconventional thought and discussion that gave the Rising its philosophical underpinning. In the years before the insurrection, feminism and suffragism were explored alongside socialism, secularism, and vegetarianism by a group of bourgeois Irish rebels who were often, as Foster puts it, determined to reject “the values and ambitions of their parents” (xxii). In Vivid Faces, a series of gerundic chapter titles thus indicate the radical possibilities explored by the “revolutionary generation” in terms of “Learning,” “Playing,” “Loving,” “Writing,” “Arming,” and “Fighting.” These chapters are diligently if unfussily footnoted in order to appeal to the general as well as the academic reader, and they are, it must be said, expressed quite brilliantly by a historian who also happens to be a master stylist in the English language.

Fascinatingly, Foster also sets about tracing the fact that, amongst the “revolutionary generation,” “sexual unconventionality was not unknown” (123). He describes the doctor Kathleen Lynn, a nationalist and member of the Citizen Army who acted as a medical officer during the Easter Rising, but who was also a suffragist who lived together in what looks suspiciously like a marriage with Madeleine ffrench-Mullen. Foster adds, “Besides Lynn and ffrench-Mullen, female couples were well known among socialist and radical circles, such as Louie Bennett and Helen Chenevix, and Elizabeth O’Farrell and Julia Grenan; to a certain extent, lesbians may have been drawn to such organizations in order to meet each other” (133). He also describes how a figure such as Rosamund Jacob, involved in a number of nationalist organizations, could also write in her diary:

I certainly am in some ways a man in disguise. My love for Tony [Farrington] is more masculine than feminine. I love him, not spiritually & patiently & unselfishly, as a woman is supposed to love a man, but physically and impatiently & selfishly, as a man loves a woman. (130)

Of course, we must beware of imposing our modern notions of sexuality onto the figures of 1916, and we should not ignore the fact that many rebels seem to have led unremarkable sexual lives that proceeded in accord with the conventions of the time. But Foster has done a great service in highlighting not only the variation in experience that did exist amongst this group, but also in showing how such acceptance of difference was ultimately bulldozed out of the post-revolutionary state. He argues that, by contrast with the sense of transformative possibility that was articulated from the 1890s by the “revolutionary generation,” a more narrowly religious set of ideas came to dominate the later memorializing of the event, when “Redemption, epiphany and resurrection provided recurring tropes for the Rising and its aftermath” (291). He quotes from Bulmer Hobson’s disappointed reflection of 1956 that “the phoenix of our youth has fluttered to earth” as “a miserable old hen” (289). More disturbing, by far, is the arresting image Foster reproduces from a January 1922 edition of D. P. Moran’s newspaper, The Leader, in which a cartoon entitled “some work before us” shows an upright man labeled “soul of Ireland” sweeping away a black man holding a drum bearing the legend “jazz dance music” (288).

If this important book harbors a flaw, it is that middle-class people tend to leave a greater wad of written records behind them than do members of the working class. Consequently, a volume of this sort, which so diligently relies upon the archives, is inevitably likely to devote more attention to the bourgeois members of the “revolutionary generation.” As John Borgonovo has already pointed out in the Dublin Review of Books, sixty per cent of those who are described in the biographical appendix to Vivid Faces come from the privileged backgrounds of the upper or middle class; hence, “The book’s evidence base is therefore dominated by social elites and Dubliners, and underrepresents men and women outside the capital and activists from the working and lower middle classes.”[3] Foster certainly has fewer things to say about the working-class component of that generation, and although he assiduously acknowledges the socialist dimension within nationalist thinking of the era, the lives of those from outside of the middle or upper classes remain comparatively obscure. Some of Foster’s emphasis is therefore nuanced by other recently published volumes that take a different tack. After all, volumes such as Joe Good’s Inside the GPO 1916: A First-Hand Account and Fearghal McGarry’s Rebels: Voices from the Easter Rising have printed overlooked, first-hand testimony that emphasizes the devotion to the rosary that existed amongst the insurgents outside the leadership cadre. Indeed, part of the sting of Sean O’Casey’s assessment of the Rising in The Plough and the Stars depends on the recognition that, from the tenements at least, the rebellion might have looked like “A few hundhred scrawls o’ chaps with a couple o’ guns an’ Rosary beads.”

Still, Vivid Faces surely deals a deathblow to any lingering “faith and fatherland” interpretations of the Easter Rising, as well as explores with boldness some of the areas that remain neuralgic in contemporary Ireland. Foster’s work resonates powerfully, for instance, with developments at the Abbey Theatre since last October, when the national playhouse set out details of the program that would mark the centenary of the Easter Rising. Almost immediately after that announcement, a hullabaloo ensued because, for this commemorative year, the Abbey had included ten plays on the program, but only one of them (a touring production for schools) was written by a woman. A campaign against the Abbey’s crass judgment quickly mushroomed on social media, engendering a broader debate about gender inclusivity in the arts, with the Abbey’s program title, “Waking the Nation,” triggering the antagonistic Twitter hashtag, “#WakingTheFeminists.”

The Abbey might not have found itself in this position if only the theater’s artistic director had kept a copy of Roy Foster’s Vivid Faces on the bedside table. For Foster reveals just how much the Easter Rising owed in the first place to the theatrical enterprises of various nationalist women. As Foster reminds us, the Abbey playhouse of a century ago featured the prominent leadership of Lady Gregory, whose “allegorical historical plays such as Kincora (1905) and Dervorgilla (1907) carried a distinct political message about the corruption of English domination, and the need to recapture a Gaelic independence” (85). In the light of Foster’s analysis, the absence of any work by Gregory in the Abbey’s 2016 commemorative program looks like a particularly sad omission. But Gregory wasn’t alone in creating revolutionary theater during the build-up to 1916. Elsewhere, as Foster reminds us, Countess Markievicz wrote and acted in plays for the Theatre of Ireland before fighting during the Rising in the College of Surgeons. Similarly, Alice Milligan scripted pageant-plays, such as The Wearing of the Green (1898) and The Last Feast of the Fianna (1899), dramas that “affected young nationalist activists in the provinces” (87). And Milligan’s scripts were produced by Maud Gonne’s radical women’s group, Inghinidhe na hÉireann, whose activities allowed future theater stars such as Sara and Molly Allgood to learn their craft in the same organization as actors such as Helena Molony and Máire nic Shiubhlaigh, who would both mobilize during the rebellion. As Roy Foster shows, then, the revolutionary generation of 1916 included a component that was itself determinedly “#WakingTheFeminists.”

As the entirely justified anger over the Abbey Theatre’s 2016 program has revealed, Ireland’s recent history may still have much to teach us, and that is why Vivid Faces deserves a wide and enthusiastic audience. Roy Foster has written a brilliantly readable book that reveals the radical currents that ran through a revolution whose aftershocks will continue to reverberate for some time to come.