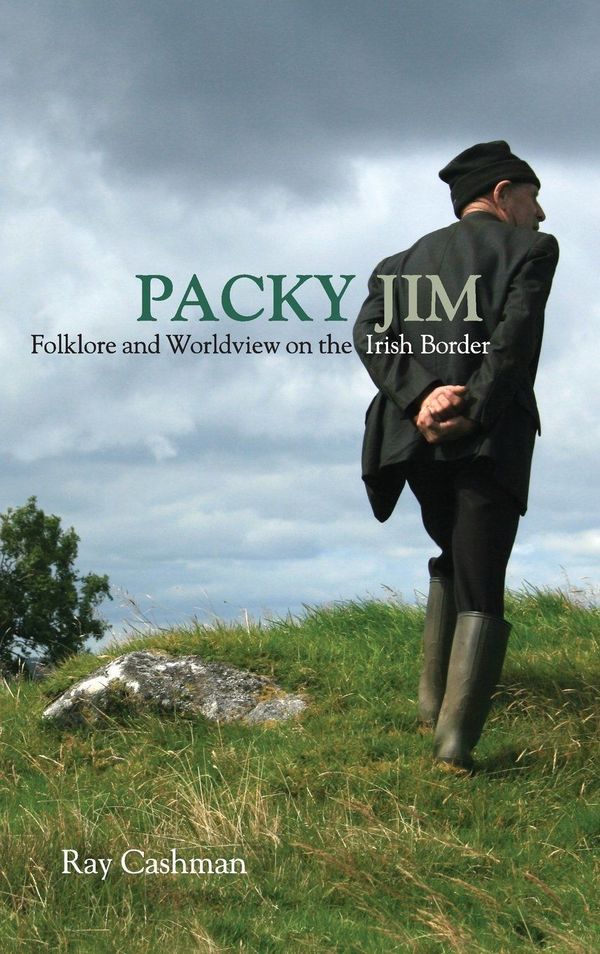 In order to discover potential informants in a new locality, the former folklore collector Tom Munnelly (1944-2007) would inquire in a local pub if there were any “old people with songs in the area.” He knew he had been at this game too long when one barman replied “No one as old as you.” [1] Collectors of folklore often share stories with each other on how they made their way into certain communities and how they built their relationships with their informants. Folklorists do not tire of such anecdotes, as building a strong relationship with those that we collect from is integral to the formation of trust that is required in order for our work to be carried out. As we enter into the pages of Packy Jim: Folklore and Worldview on the Irish Border, Ray Cashman shares his own experience as he brings the reader into Packy Jim’s world. The author in the first instance is shouting to the window his connections to the community and in particular to a friend of Packy’s cousin before Packy Jim comes outside to investigate.

While familiarizing oneself with the chapter headings, the term “place” jumps out. Although the informant is set in a particular geographical area, his sense of place is shaped by history, social order, and the supernatural to name a few influences into one’s cosmology. Anchored in the locality with emphasis on one informant, Cashman engages a methodological approach that has an established history in folkloristic studies. Although Cashman quickly distinguishes himself apart from previous studies, as he acknowledges the complexities in what, at first glance, could appear to be a much simpler examination due to the choice of a rural bachelor who continues to live quite a traditional way of life. Building the case for choosing Packy Jim for such an extensive study, we are informed of the role Packy Jim’s house played during the cross border smuggling in 1930s onward. This was a house on a section of the border that was not significant enough to merit a Northern Irish border patrol station.

The author on the one hand, is carrying on a tradition that began in the nineteenth century and is seeking traditions that center on the disappearance of vernacular material, whether it is through antiquarian work or established tradition archives. Hence, an approach is taken that is informed by the ways in which cultural phenomena were perceived and interpreted. That said, in terms of folkloristic studies in Ireland, the focus has been largely on the individual performer and the living tradition, from Seán Ó Conaill and Peig Sayers to An Bab Feiritéar and Seán Ó hEinirí. On the other hand, Cashman is quite comfortable in situating the existence of this earlier life in a traditional setting, consciously rejecting certain aspects of modernity while still being aware of and engaged with much of what modernity has brought to communities.

The author recognizes the previous scholars who have already worked in Ireland while, at the same time, exuding a confidence and expressing a knowledge worn lightly in North American folkloristic scholarship. Cashman is well versed with the research relevant to his chosen examples from Packy Jim’s repertoire, but through his seamless, and at times what appears to be effortless, writing he does not break the narrative. The international referencing and citations are adhered to but not to the distraction of the material. The expected critical apparatus of the International Motif Index is included and easy to consult but this framework does not impinge on the organization of the material. In fact, it is quite the opposite. The material remains in its natural setting of the telling or tellings as the case may be, and when required, a motif reference is given or migratory legend number noted. The references are at the author’s discretion and, as he admits, far more references could be given, but he did not feel they merited inclusion. It is unfortunate that international tale-types under ATU numbers are not given.

The author does not question “tradition” itself. He allows the generations of scholarship before him to carve out the definitions for material that a folklorist seeks. At the same time, he allows for a realistic perception of the influences surrounding his informant while looking at the relationship between the individual and tradition. Cashman recognizes that tradition is both a process and a resource and succinctly qualifies his methodological framework through Lauri Honko’s and Henry Glassie’s work, but as it is kept in the abstract and theoretical, one might ask is Cashman questioning the empirical nature of an individual’s cultural inventory? As the first piece from Packy Jim is a poem from a schoolbook, it is clear that Cashman is working from an informed, intuitive place of reckoning.

There is a certain tension demonstrated as the author communicates his awareness he came across “…the salvage ethnographer’s dream informant, a holdover from years past, a keeper of relics,” (3) while at the same time, he looks beyond the initial stereotypes and recognizes the fact that he has encountered an individual who is capable of articulating the artistry and aesthetic required for the verbal arts; “I will not try to conceal my intrinsic Romantic leanings, passing myself off as an entirely impartial academic only in search of empirical data…” (25). The citation used was the work of the author; “Critical Nostalgia and Material Culture in Northern Ireland” (Cashman, 2006), but it is a crucial discourse required in the development of rural studies in vernacular traditions.

Chapter one begins with the historical and chronological information on Packy Jim and his parents. In describing Packy Jim’s home, the reader is given the impression that it was “museum quality.” Cashman again is able to adhere to the lineage of scholarship in this area while, at the same time, he examines the larger picture, including elements around globalization when he contrasts traditional vernacular housing to more recent objects, such as a coffee mug, presumably made in China that made its way via New York City.

The news of a collector working in the area gave the local residents a chance to elicit narratives from Packy Jim. Arguably the presence of the collector has “given permission” to investigate particular tales. The collector’s recognition of this phenomenon again brings the reader into the collecting space and allows the reader to step out and see the impact of a collector in a locality due to the outsider’s presence and interest.

The reader is informed that the author visited Packy Jim every other week for a year and continued to return subsequently over the next fifteen years. This publication draws on over sixty-five hours of audio material and five hours of video footage. The reader may recall, being introduced to Packy Jim in Storytelling on the Northern Irish Border, (Cashman, 2008) as well as numerous journal articles, such as the author’s piece in Béaloideas; The Journal of the Folklore of Ireland Society, “Folklore as Self Expression and Social Critique: A Voice from the Donegal Border,” (Cashman, 2015). The author is to be highly commended on navigating the pressures of modern academic life and, in particular, to publish as soon as possible. At the same time, he has created a significant repository over a long period of time.

This reviewer wishes that the publication was longer than its 307 pages. At times, the author sums up Packy Jim’s words as opposed to giving Packy Jim’s actual narrative. The level of editing may have been dictated by space constraints. For example, the summaries of Packy Jim’s most frequent iconic personal narratives are just that (43-45). The author must have heard these narratives so often that he believes they may be reduced to redactions, which underplay the importance of the telling. We must take the author at his word that the actual personal narratives are “polished set pieces” (47). The chapters then subsequently build on each other moving from the personal to the historical with particular reference to narratives of the Troubles in the area.  Then, in true folkloristic fashion, the supernatural precedes organized religion. Finally, the author takes a look at the local before expanding to the world at large.

The author’s interpretation and understanding of this world are constant. This is not a traditionally edited volume of an informant’s repertoire. It is a true partnership with the two voices having an equal footing.  For those interested in the verbal artistry of Packy Jim, it is demonstrated through a ghost story from pages 150-153, collected on the 18th of March 1999.

There is a clear editorial policy found in the appendices and the author has engaged with the ethnopoetic process. In an age when audio recordings could be made available through publications and digital formats, the orthography used to reflect a vernacular dialect at times appears to this reviewer, to belong to a nineteenth-century approach.  Cashman writes that oral transcription of dialect is a contentious issue. This reviewer finds it linguistically misleading to have transcription and glossary as a unit in “A Note on Language” (xxi). Words such as “afore” in place of “before” or “afeared” for “afraid” are given alongside the term “brae,” for example, which is an Irish-language term for the word “hill” (“bré”).

The map in a recent reprint and translation of Sgéalta Mhuintir Luinigh; Munterloney Folktales (Dublin, 2015 [1933]) on pages ii-iii and the map of Packy Jim’s wider context on page 33 are not exact but there is an overlap, and it does beg the question what the author could have drawn from earlier collected material in the area?  An engagement with the influence of Irish language material would enrich an understanding of Packy Jim’s world.

Cashman’s blend of a traditional folklore publication along with the most up to date view on folkloristics is commendable. He deserves recognition of his monumental work in the first instance. That said, this reviewer would have felt positively challenged if the author had, perhaps, taken greater chances and given a more innovative approach to the material. Nonetheless, it was a pleasure and an honor to review the publication and to witness the work that has gone into Packy Jim; Folklore and Worldview on the Irish Border. Cashman’s writing style alone makes it worth the read, added to the rigorous scholarship applied, and here we have a volume that is sure to stand along with the likes of Ó Súilleabháin, Evans, and Glassie. This publication deserves a greater readership than the viewership of an individual episode of RTÉ’s PrimeTime which featured Packy Jim, and this reviewer is confident that this reach will be achieved.