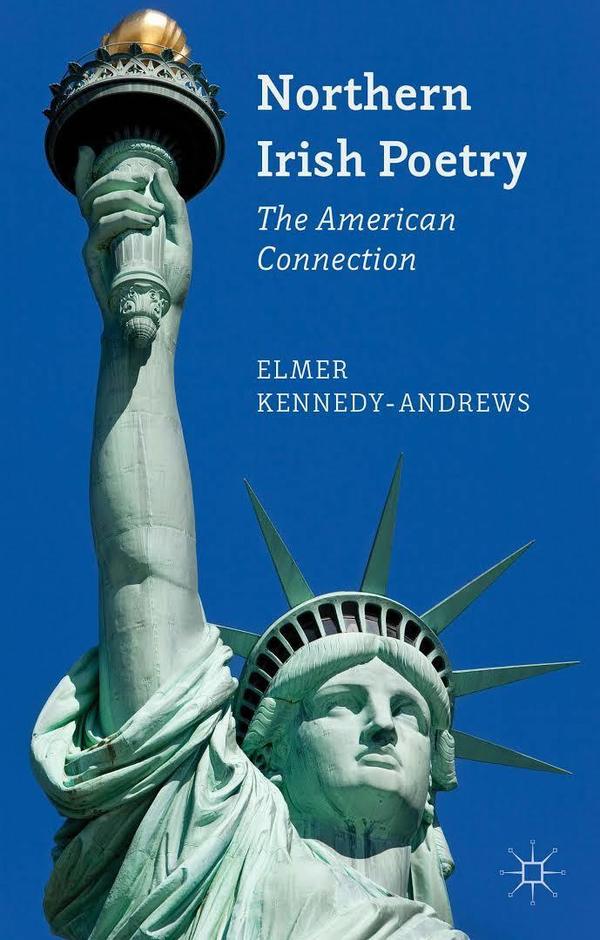 After agreeing to review this book, it was with great sadness that I learned that Elmer Kennedy-Andrews passed away in 2015. Professor of English at the University of Ulster, his publications include monographs and edited collections of essays on Seamus Heaney, Derek Mahon, Paul Muldoon, and Ciaran Carson, and on Irish fiction from the 1960s with particular attention to place, home, and the Northern Ireland Troubles. Though I didn’t have the opportunity to meet him, his work has been invaluable in shaping my research and approach to (Northern) Ireland and to poetry, and I have always read his work with interest and attention. Northern Irish Poetry: The American Connection is no exception, though it is a book probably best suited to an American audience as a well-researched and extremely readable introduction to Northern Irish poetry that uses connections to America—experiential, imaginative, geographic, and literary—as starting points for its commentary. Composed of five poet-studies—of John Montague, Seamus Heaney, Derek Mahon, Paul Muldoon, and Ciaran Carson—with an introductory reflection on “Transnational Poetics” and a conclusion entitled “A Widening Circle,” Kennedy-Andrews’s book is indeed wide-ranging in scope and demonstrates the author’s obvious scholarly enthusiasm for the Northern Irish poetry addressed. So much so, indeed, that I kept forgetting the book’s subtitle.

That the book is only tangentially a book about America or American poetry is not a critique. The scale of the project potentially endless, the book delivers what the wording of the title and subtitle promises in offering a broad survey of connections between America(n) and Northern Irish poetry. Kennedy-Andrews’s book isn’t, then—and couldn’t be—a sustained comparative analysis of poetry, place, politics, and geography, but a thoughtful consideration of Northern Irish poetry from the 1960s and some of its points of contact with North American literature and culture. “America” refers mostly to the United States here—though Argentine Jorge Luis Borges appears in the chapter on Ciaran Carson—and the American poets discussed are mostly white and male. Muldoon’s research about and representation of Native American and Inuit communities in North Canada is the exception here, and while the book references the work of Emily Dickinson and Sylvia Plath, there is no sense that the poets discussed here engage in any serious manner with poetry by women. Kennedy-Andrews misses a trick by not considering the influence of Emily Dickinson on the economic, intelligent wordplay of Muldoon and Carson. He misses another, I think, by not exploring the influence of Elizabeth Bishop on Northern Irish poetry more broadly, particularly as he concludes the chapter on Heaney by suggesting “he sees in Bishop the kind of poet he himself wants to be” (98) but offers no comparative readings of their work. Following Rachel Buxton’s study of Robert Frost’s influence on Heaney and Muldoon, there are many more books yet to be written on the influence of individual poets from the U.S.—Wallace Stevens, Bishop, and Robert Lowell among them—on Northern Irish poetry.

Refreshingly, Kennedy-Andrews is not afraid to be critical and to show the ideological limits of literary influence. Of John Montague, for example, he notes that alongside the international influences that drew the poet beyond the parish, Montague’s attempt to recover nationalist revivalist narratives of Irishness is conservative and nativist. Thus, despite absorbing Charles Olson’s call for “open field” poetry and William Carlos Williams’s emphasis on process, Montague’s poetry retains a problematic teleology, in Kennedy-Andrews’s view, that longs for order and ends in a vision of home.

Kennedy-Andrews reads Heaney’s District and Circle in light of “the militarization of modern life resulting from American foreign policy” (78), both in the context of World War II and the War on Terror waged by George W. Bush in the aftermath of 9/11. This short but useful section offers a necessary view of Heaney’s engagement with globalization and its violence, and it’s especially welcome in a volume that reveals a slight tendency to read “America” as a shorthand for expansiveness, multiculturalism, possibility, and open poetic forms. Even where readings of individual poets, such as Frost, complicate and even counter this with strangeness, darkness, and the loneliness of individual vision, “America” as an idea in this book—one used to bind together the work of Walt Whitman, Ralph Waldo Emerson, Williams, Hart Crane, Frost, and Lowell—generally works to offer Northern Irish poets formal and ideological freedom, a means of resisting the fixity of metrical pattern and competing nationalisms. Though Kennedy-Andrews takes care to show that this is a matter of reception and absorption more so than influence per se, I would have liked him to have tried harder to theorize the “America” of his subtitle, or to name the difficulty of the attempt. This would then lead to an examination of why these particular American poets proved influential for these particular Northern Irish ones, with attention to the role of class, race, gender, and geography in such attractions (and repulsions), as well as form and style. Leaving gender aside for a moment, Kennedy-Andrews perceives, and wants to praise, “the American suspicion that discourses based on principles of rootedness, unity and centredness are connected with systems of domination, control and violence” (211). But new and more insidious forms of violence are made possible by a post-Fordist neoliberalism that prizes mobility, flexibility, and decentered forms of power—in America, Ireland, and beyond. “America” can’t always signify what Kennedy-Andrews wants; that it can’t, and that the operations of its power are complex and multiple, is worth analyzing in more detail. But this will be the task of another critic.

In his introduction, Kennedy-Andrews offers what he calls a “bald summary” of perceptions of poetry produced in the North of Ireland and America, the former “rural, insular, pious, backward-looking,” preoccupied with “formalism and metrical language,” the latter “shaped by the wilderness of westward expansion” and attuned to “the multicultural, multi-tongued chorus of the ‘melting-pot’’’ (11). This is to give national boundaries to Lowell’s diagnosis of “the cooked and the raw” in post-war poetry, and Kennedy-Andrews does so explicitly, extending the cooked to “British/Irish” metrical poetry (7). Every critic paints in broad brushstrokes from time to time, and here Northern Irish poetry turns stodgy and stale, while the American dream glimmers on. It’s a summary made for an American reader and also seems dated, its application limited to earlier “generations.” For younger poets and critics from Northern Ireland, “America” has other associations: 9/11, the War on Terror, Facebook, financial collapse, high-frequency trading, Obamacare, and the Freedom to Marry campaign. But this schematic reading quickly fades as poems come into view. “Individual poems,” Kennedy-Andrews insists, “are more like force fields of competing, often contradictory, energies” (18), and it is his discussions of single poems and obvious scholarly enthusiasm for this poetry that carried me from start to finish.

The standout comparative close readings in Northern Irish Poetry: The American Connection are those of Heaney and Theodore Roethke. A new reading of Heaney’s poetry is particularly thrilling, so my reading pleasure was diminished by what are understandable shifts in focus that read Heaney alongside Derek Walcott, Frost, and Lowell. This is where the endlessness of Kennedy-Andrews’s critical task makes itself felt, and the book’s strength is breadth—its view is that of the whole prairie, not just the parish or province. This will leave some readers wanting, but as an introduction to Northern Irish poetry by men through the lens of American place, culture, and poetry, its expansive view works very well.

The conclusion’s title promises more than its pages deliver. The absence of female poets is, I think, much to do with Kennedy-Andrews’s preference for earlier decades of Northern Irish poetry. (If Muldoon is one of the “younger generation” in “the global village” (131), there is a younger one still.) While Leontia Flynn and Sinéad Morrissey are missing here, so is Alan Gillis. That said, it’s a significant and regrettable absence in a book that doesn’t theorize the role of gender politics in the lines of literary influence that cross the Atlantic. First surveying five more male poets (Louis MacNeice, Padraic Fiacc, Gearóid MacLochlainn, Michael Longley, and Frank Ormsby), the book concludes with a discussion of Medbh McGuckian’s poetry. The annex effect of these five pages, and the way a diverse group of poets are lumped together under the banner of “women’s writing,” is unfortunate. If “poets like Medbh McGuckian, Sinead Morrisey, Leontia Flynn, Colette Bryce may be seen to embody a Redskin drive to liberate the language from both English and male control,” we don’t get to read about it here. My point is not that critical monographs perform affirmative action politics in their choice of subject, but to highlight alternative terrain for the exploration of American connections in Northern Irish poetry. Peruse the contents page of Flynn’s Drives (2008), for example, and find “LA,” “Washington,” “New York,” “Dorothy Parker,” “F. Scott Fitzgerald,” “Alfred Hitchcock,” “Elizabeth Bishop,” and “Robert Lowell”; turn the pages of all of her collections to find debts to American poetry. Morrissey’s “Driving Alone on a Snowy Evening” (The State of the Prisons, 2005) is, as the title suggests, a spin on Frost’s poem while “The Reversal” (Through the Square Window, 2009) has an epigraph from “After Apple-Picking” in a volume and body of work preoccupied, like Frost, by the strangeness of sight and poetic panes.

There are many rich pairings here that provide suggestive starting points for further research: Mahon and Pound is one interesting example, though here as elsewhere the pairings are multiple, with Crane also in the frame alongside nineteenth-century Transcendentalists like Emerson and modern environmentalists like Rachel Carson. While I would like to know more about how the author sees neoliberal politics play out differently in Muldoon’s forms than in John Ashbery’s, and won’t get the chance to, Kennedy-Andrews’s Whitman-like ability to “contain multitudes” in his readings of poetry from Northern Ireland is to be praised. The NI/US binary falls away, allowing for complexity: “Writing both against and from within the globalizing circuits of modernity, Northern Irish poets move between assimilation […], nativism […], and the skepticism of those who are unwilling to subscribe to a rigid nationalism and are ready to engage transnational modes of thinking,” approaches which, Kennedy-Andrews says, “often coexist in the same poet, or even the same work” (19). Such variety is perhaps best seen in his sensitive exploration of the ways in which Heaney, Muldoon, and Carson each read and respond to Frost. Three Frosts emerge, three styles, and three distinctive readers of his work. The gender imbalance notwithstanding, Kennedy-Andrews’s instinct is to widen the terms of the enquiry while focusing on individual lyrics, and these readings of Northern Irish poetry are sure to encourage more expansive literary research.