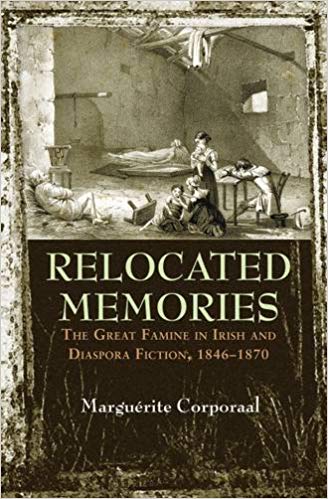 Relocated Memories: The Great Famine in Irish and Diaspora Fiction, 1846-1870 is an important and most welcome work and is part of a larger project which its author, Marguérite Corporaal, is directing on famine and memory at Radboud University, Nijmegen, Netherlands. Corporaal begins by setting the scene in terms of memory theory, particularly with respect to its transgenerational and transnational aspects. In particular, she wonders if with regard to the Famine we can “speak of a specific diasporic development of the cultural memories that are connected to the former homeland?” Her interest is in “the temporal and spatial transference of the memory” of the Irish Famine through fiction (3). This volume looks at famine fiction between 1846 and 1870, a hitherto underexplored area, and definitively puts to rest the persistent shibboleth that the Famine was followed by a period of silence concerning it both in fiction and more generally. She examines writing in Ireland, Britain, and North America, noting the need to attend to the specific circumstances of the latter three diasporic contexts.wi

Corporaal’s analysis focuses on the three key elements of narrative fiction that are thought to carry memory: focalization, narrative voice, and emplotment. She marries these in her analysis of the novels she examines with the three major themes associated with the Famine in cultural memory: victims of starvation, landscape, and emigration, while also looking at issues of deprivation, loss, and displacement. Famine memory is also liminal, “at once narrated and suppressed, simultaneously tangible and elusive” (20).

As its title suggests, the first chapter, “Displacing the Famine,” examines ways in which narrative strategies are used to displace details of famine and to relocate images of famine through narrative time and space; “In many novels and stories written in the immediate aftermath of the Great Famine, the plot is set during an earlier Irish famine: temporal distancing occurs in that the unbearable memories of recent starvation are displaced to a more distant past” (40). Readers of both William Carleton and Charles Lever will be familiar with this strategy. Carleton’s novel The Black Prophet (1847) is set during the 1816-17 famine while Lever’s The Martin’s of Cro’ Martin (1856) refers to famine in 1832. Corporaal argues that “these texts re-enact recollections of the Great Famine, but they also seek to create a greater distance between its harrowing trauma and the present by relocating recent famine memories to earlier eras” (41). In terms of space, Corporaal notes that whereas early famine fiction in the diaspora seemed to equate the harsh conditions of the Famine with those of Irish immigrants, later famine fiction contrasted the Famine with a North America characterized by an abundance of food.

The second chapter, “Spectacles of Starvation,” focuses on the spectacle of the famished body, through the lens of Julia Kristeva’s notion of abjection: “The embodiments of approaching death that transcend the boundaries of what is seen as socially acceptable, the Famine victims in these narratives evoke a sense of ‘uncanniness’” (58). Corporaal cites Herbert Fitzgerald’s visit to a famine cabin in Castle Richmond (1860) in this regard. Such encounters can lead both to narrative fragmentation and emotional dissociation and ultimately to fetishism as a means to “compensate for anxiety and distress. Early Famine fiction often diverts the narrative consciousness away from the display of the emaciated body by a fascination with the beauties of the victims’ hair” (71). And in a later text, Margaret Brew’s The Chronicles of Castle Cloyne (1885), the only means by which one character can recognize her starving relative is by means of her golden glossy hair (76).

Chapter three, “Beyond Boundaries,” charts the ways in which narratives “reconfigure the Great Famine as an episode that exceeds epistemological and normative frontiers” (83). Corporaal sees notions of the sublime and the Gothic at work in Famine fiction. Not surprisingly, therefore, the cabin threshold where an observer, often from a more privileged social position, encounters the starving inhabitants turns out to be a frequent inclusion in Famine fiction. As Corporaal writes, “The languishing and dead bodies of the starved that are confined in these cabins, hidden from human sight, suggest the entrapment of a class in their poverty as well as society’s neglect of the famishing population and their suffering” (95). The chapter concludes with considerations of the use of animal comparison and spectral haunting in depictions of famine starvation and its lasting legacy: “The idea of a past that must resurface inevitably and cannot be put to rest is also alluded to in various famine narratives that portray how the corpses of the Famine victims are not properly interred and are sometimes even dug up by dogs looking for meat” (116). She concludes that famine narratives “take us into the liminal physical space of the homes of the famine-stricken as well as the liminal psychological space of the famine-afflicted mind, across the thresholds of what people would regard as common or acceptable conditions or conduct” (117).

The next two chapters examine the role of the landscape. Chapter four, “From Wasteland to Paradise Regained,” traces the very complex and sometimes contradictory identification and disidentification of landscape and people in time of famine. Corporaal claims, “the Famine wastelands in these narratives reveal the population’s sense of alienation from their native soil, as well as a crisis of Ireland’s rural identity” (123). Equally, the devastated landscape can also serve as a sign of the devastation of the population. Famine narratives also gesture to a belief in an Edenic pre-Famine landscape where the people are connected with the landscape. Very often “the dramatic transfiguration of the pastoral Irish landscape into Famine wasteland is likewise accompanied by a loss of home” (128). In addition, landscape as wasteland carried with it a politicized, anti-colonial charge, as one of the benefits of colonization was always said to have been the full and efficient use of land. Equally, the aestheticization of parts of the landscape by landlords could have been challenged as an attempt to conceal more brutal realities elsewhere. As time went on, however, some narratives celebrated the return of a thriving landscape, suggesting perhaps that the Famine had been an aberration. Across the Atlantic a longing for “a distant Edenic Irish landscape” was central to an early “emerging diasporic consciousness” (146). Again, as time wore on, “the natural spaces in North American cities as well as on the western frontier are conceptualized as pastoral sites where Irish immigrants may establish new Erins as alternatives to the stricken homeland” (148).

Chapter five, “Ruins of the Past,” looks at the role of ruins—ancient ruins rather than ravaged famine dwellings—in famine narratives, and not as romantic remnants so much as “signifiers of colonial violence and subjection” (159). As Corporaal  notes, “signifying the degeneration of the Irish rural population and their culture during the Great Famine in both homeland and diaspora fiction, ruins function as transcultural tropes that give expression to the traumatic recollections of the Great Famine, as one of the episodes of colonial oppression to which Ireland has been subject” (169). Ruins are used therefore to signal the Famine as part of a longer narrative of oppression and resistance rather than as a unique event.

The final chapter, “Recollections and (Re)migration” explores ambivalence among narratives dealing with the flight of emigrants from Ireland. Some narratives see it as forced expatriation but others view emigration “as a redemption of Famine miseries” (182). The harsh conditions of the Atlantic crossing are also a theme with its trials seen as a sign of further difficulties that will be encountered on arrival, with the implication “that ethnic separatism is a condition for survival and success in the host societies” (182). By contrast narratives of remigration, of a return to Ireland, attest to “the complex negotiation of the Famine era: by a nostalgic reconfiguration of Ireland that contradictorily lies between restoration and regeneration and between longed-for, bygone eras and desired futures” (220).

This account of some of the main lines of argument in Relocated Memories will, I hope, give an indication of the richness of Marguérite Corporaal’s work. Ambivalence is often the hallmark of famine fictions, with authors caught between the horror of the memory of the past and the need to adopt what they consider to be a positive outlook for the future. The social, class, and religious agendas of such authors are of key importance in this regard, in my view. Like the best pioneering work, this book ought to lead to further work in the area and Professor Corporaal generously outlines some areas for future research in her conclusion. She has set for future researchers a high standard in Relocated Memories, which is a work that brings the best of contemporary theoretical work to bear on nearly seventy fictions of the Irish Famine and leads to lucid and subtle conclusions about a complex subject.