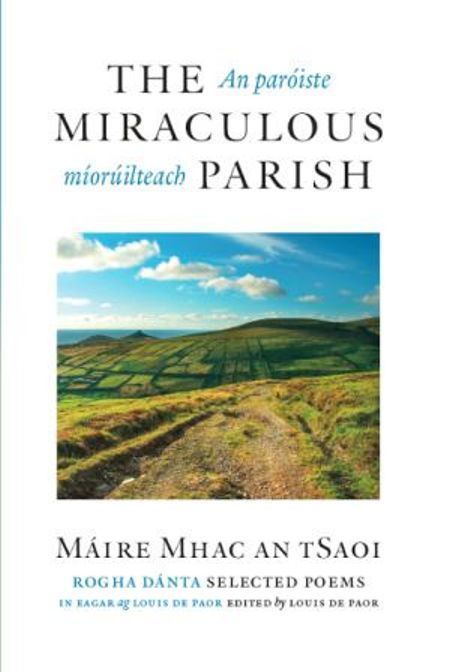 With candles of angels the sky is now

The frost on the wind from the hills has a

Kindle the fire and go to your slumber,

Jesus will lie in this household tonight…[1]

Generations of Irish schoolchildren learned these lines, from “Oíche Nollag” / “Christmas Night,” written in the poet’s own teenage years. Appropriately, it opens this very welcome volume, which is the first to gather a sizeable selection of her work and offer parallel English translations, a substantial and excellent introduction and some useful ancillary notes. Louis de Paor‘s conception and realization of this project, his commissioning of such distinguished translators, and the securing of invaluable and active co-operation from the poet herself, constitute a very valuable addition to Irish literature.

Born in 1922—and therefore the same age as the Irish state, as the title of her 2003 autobiography puts it—Mhac an tSaoi is one of the most distinguished Irish poets in either language. She published five collections of poetry in Irish between 1956 and 1999, starting with Margadh na Saoire [“The Hiring-Fair”], a remarkably original volume which broke new ground in the frank and forceful realization of a woman’s lyric voice. At its best, it arguably anticipates by two decades or more the achievements of Irish women poets writing in English such as Eavan Boland and Eiléan Ní Chuilleanáin, and acted as a formative antecedent for Irish-language poets Nuala Ní Dhomhnaill and Biddy Jenkinson. She is one of the three who (said Ní Dhomhnaill) “dragged Irish-language poetry screaming and kicking”[2] into the twentieth century in the 1950s.

Mhac an tSaoi came from an élite, nationalist family. Both her parents had been active in the revolutionary period. Her mother Margaret Browne was a scholar of classical Irish poetry and taught it at University College Dublin, her maternal uncles were distinguished churchmen, one a Cardinal, and her father held Government Ministries between 1932 and 1965. Máire spent many childhood months with her beloved uncle, the prominent intellectual and writer Monsignor Pádraig de Brún, in the Kerry Gaeltacht, gaining an unparalleled knowledge of spoken and written Irish. As an adult she first became a scholar of Irish literature, then a practising diplomat serving in France, Spain, and the UN in New York. In 1962, she married international statesman and historian Conor Cruise O’Brien.

Her most celebrated single work has been the remarkable seven-poem sequence “Ceathrúintí Mháire Ní Ógáin” [“Mary Hogan’s Quatrains”], about a transgressive sexual affair, which won the Oireachtas prize and appeared in her first collection. In poetic accomplishment, erotic charge and emotional intensity, the “Ceathrúintí” have been rightly admired as breaking new ground in twentieth-century Irish literature: reviewing Margadh na Saoire in 1957, John Jordan called her “a prober of the condition of love,” noting that “no living Irish poet has brought more honesty and insight to the subject” (Qtd in “Preface” 13). Not least among Mhac an tSaoi’s achievements in this work is a compelling sexual frankness and defiance of the repressive ethos of the period; few readers forget the electrifying stanza: “Beagbheann ar amhras daoine, / Beagbheann ar chros na sagart, / Ar gach ní ach bheith sínte / Idir tú agus falla” [I care little for people’s suspicions, / I care little for priests’ prohibitions, / For anything save to lie stretched/ Between you and the wall—.“[3] Here the simplicity of the language recalls the plainness of the great love-poetry of amhráin na ndaoine, revealing the poet’s supple capacity to take inspiration from different aspects of the tradition. Other single lyrics are also familiar parts of the canon and are anthologized and taught: these include the Christmas poem quoted, loving poems about children and parenting such as “An Chéad Bhróg” [translated as “The First Shoes”] and “Codladh an Ghaiscígh” [“Hero Sleeps”], and affectionate memory-pieces about Corca Dhuibhne such as “Jack.” But not least among the benefits of this volume is that, in assembling about seventy poems, it relocates familiar pieces like these among many less well-known, but often arresting and beautiful, others.

For instance, the trajectory of the “Ceathrúintí” (“the arc of a love affair,” as Paul Simon says) is here extended and completed by two subsequent poems. “An Dá Thráigh” [“The Two Ebbs”] and the much later “Cian á Thógaint Díom” [“Sorrow Lifts from Me”] clearly address the same painful experience of passionate but ultimately failed sexual love. In the first of these, the persona uses the startling motif of failed motherhood to characterize the relationship as destructive both to herself and her lover: “Is mé an leanbh baineadh den gcín, / Is mé an lao – is an té do scoith.” [“I am the child torn from the breast. / I am the calf—and the one who tore it away.”[4] By contrast the much later and very fine “Cian,” a poem of great formal beauty which gracefully adapts traditional rhyme techniques, revisits these experiences after the lover’s death and establishes emotional equilibrium, recovering the bright promise and hope of love by transfiguring intense sexual affect even in the presence of physical dissolution: “Do cheannfhionn dílis seirgthe i gcré / An t-éitheach; is an fíor? An aisling ghlé.” [“This is the lie: your fair head withered in clay. / And the truth? The clear vision in the brightening day.”][5]

Her poetry mines a rich vein, in terms both of her volatile subject-matter and of the poetic techniques deployed in working on it. Early reviewers noted her consummate skills and grace both in echoing and extending earlier Irish poetry, especially the diction, style, and thematic material of the dánta grá. De Paor helpfully traces the debate among her critics as to whether her poetic voice is “strengthened” by such “deference to tradition,” or “submerged,” even, sometimes, to the point of pastiche. His own well-judged view is that Mhac an tSaoi uses “the authority of distinguished literary precedent” to provide “both a decoy and an alibi” for the articulation of transgressive experience and feeling (21-3). Such precedent is particularly evident in earlier poems such as “A fhir dar fhulaingeas…” [“Man for Whom I Endured…”],[6] a poem of clandestine love, accomplished and graceful; yet while apparently creating an impeccably conventional courtly effect, it clearly addresses, though from a different perspective, the same unorthodox subject-matter as “Ceathrúintí.” Much later, the lovely elegy “Sunt lacrimae rerum” for the great piper Séamus Ennis, in equally formal traditional style, achieves extraordinary beauty of language, rhythm, and, appropriately, assonantal effect: “Taoiseach, iar n-ídeach don cheol, gabhann chun an chré” [“The chief—now the music has passed—proceeds to his grave”].[7] Full of echoes of lost Irish pasts, it gathers to itself and expresses Mhac an tSaoi’s deep sense, in the late twentieth century, of a more general loss, of Gaeltacht culture and of the wealth of Irish traditions.

Her writing of femininity has rightly been praised, but sometimes making essentialist assumptions of femaleness as a given; the tensions and counter-currents within her work need fuller exploration. The breadth of this volume will facilitate further analysis of enigmas such as the status of “Cad is Bean?” [“What is Woman?”], an outburst of gynophobia straight from the patriarchal arsenal of anti-feminine invective.[8] In several love-poems the protagonist castigates herself as failing in womanly obligations, even as an unloving mother who either wilfully repudiates her infant or finds herself incapable of nurturing it. These insistent motifs seem to elide woman into mother in Freudian fashion, the whole persona becoming-womb, and at that an unsafe womb, for lack of good-mother, capacity to hold and contain the infant. “Ceathrúintí” V likens the unremitting pain of unhappy love to a pregnant woman’s constant awareness of carrying the foetus in her body; in poem IV, the experience of jealousy is described as a monster-infant, always feeding from her nipple with a poisonous bite. All this seems to internalise destroying-mother stereotypes with an intensity scarcely lessened by being figurative, part of the troping of unhappy sexual attachment.

In the later “Máiréad sa tsiopa cóirithe gruaige” [“Margaret in the Hairdressers”], protective maternal love is joined with gloom at the common fate of women awaiting the small girl, presented as a frightening involuntary sequence and a snare in which most women are caught: from menstruation to love, marriage, and childbearing.[9] Her remarkable 1948 short story, “An Bhean Óg,” recounts both a young mother’s loving care of her children and her simultaneous awareness of unfulfillment in her wife-and-mother role, paralleling then-contemporary arguments by de Beauvoir and anticipating 1960s Anglo-American feminism (reprinted with translation by Angela Bourke, in the Field Day Anthology Vol V (2002) 1139-41). And, contextualizing the poems within feminist critique from the late 1960s on, Bríona Nic Dhiarmada shows how they participate in the process of resistance to inherited and constricting formations of femininity.[10]

The whole complex constellation of Mhac an tSaoi’s writings of love and motherhood awaits fuller exploration, playing out as it does the contentions between a late-modern urban sensibility and feminist consciousness, and what seem partly-internalized impulses of misogyny from Irish traditions. Furthermore, as de Paor says, her writing is also notable for its exploration of ageing; the selection shows the poet’s struggle to express, or perhaps even to apprehend, feminine selfhood at different life-stages.

This fine volume not only affords an exciting encounter with a sizeable number of her poems for all poetry-lovers, whether more or less skilled in reading the Irish originals, but it is also serves as a significant stimulus for critics to devote more attention to her oeuvre, considered as a whole and as significant modern writing. It brings much more readily into view the cross-currents of her complex, sometimes troubling, writing of femininity, and the startling originality of her best poems from various points in her long writing life, from the 1956 Margadh na Saoire to the crystalline beauty of the short pieces about companionate love, ageing and the approach of death, written even while this selection was being compiled. One is “Nec patris linquens dexteram” / “Not Letting Go the Father’s Right Hand,” here translated by the poet herself (184):

At the end he became a bird,

The wild birds gathered at the

To watch him fed –

That was a time of grace,

With the wide sky and

The trees bowing in the wind –

My old love, my man-child.

Note: The phrase “an unrigged vision” is John Jordan’s, in his Irish Times review of Margadh na Saoire, 23 February 1957, used as an epigraph to de Paor’s introduction (13).