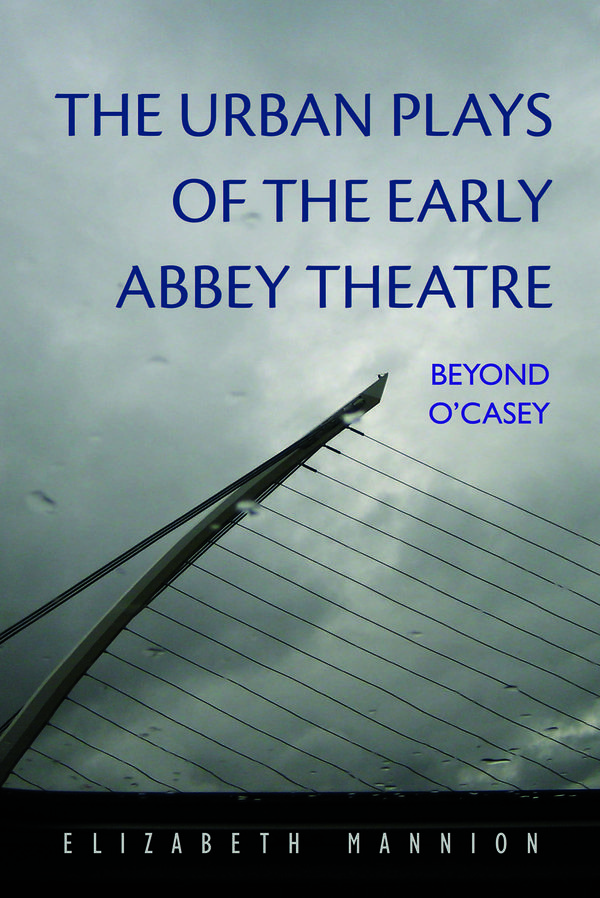 In a promotional “blurb” on the back of Elizabeth Mannion’s The Urban Plays of the Early Abbey Theatre, Nelson O’Ceallaigh Ritschel perhaps puts the matter best: this excellent book “significantly adds to the narrative of twentieth-century Irish drama.” Ritschel then describes Mannion’s addition as constituting a “missing chapter” in this narrative, but the metaphor reveals a characteristic modesty on his part, as his fine contribution on the “urban aesthetic” graced a volume I co-edited with Eileen Morgan and Shakir Mustafa some years ago, A Century of Irish Drama: Widening the Stage (2000). It might be more accurate to say that, although not entirely absent from the chronicle of the Irish theatre, this “chapter” has suffered from either critical inattentiveness or benign neglect, an unfortunate trend Mannion has countered with discussion of the often fascinating plays that might claim membership in this “minority genre,” as she phrases it (12).

The early pages of The Urban Plays of the Early Abbey Theatre include revealing historical, economic, and demographical statistics germane to Mannion’s project: for example, of the approximately 370 plays that premiered on the original Abbey stage (until 1951, the terminus point of “early” in the title), only about 15 percent represented a cityscape. Over 80 percent of these were set in Dublin, with some 10 percent located in Belfast and an even slighter percentage representing Cork and Galway.  Perhaps surprisingly, this group of plays accounted for 20 percent of box office receipts, suggesting their importance to a theatre that at times struggled financially (22). This last datum reflects the popularity of Sean O’Casey’s urban plays, particularly Juno and the Paycock, which inaugurated an era of longer runs for such highly popular offerings as Denis Johnston’s Blind Man’s Buff (1936) and in 1942 a revival of O’Casey’s The Plough and the Stars, which ran for six successful weeks. As Mannion reports, Ireland was becoming increasingly urban at the dawn of the twentieth century with about one-third of the population living in towns of 2,000 residents or more in 1911 compared to only one-eighth of the population in 1841 (20); by 2011, this number had soared to more than sixty percent. These earlier data may partially explain the predominance of rural peasant plays on the Abbey stage, a lopsidedness aided by both the nationalist project and the theatre’s incipient interest in Celtic mythology and folklore. Echoing Declan Kiberd, Mannion observes that by focusing on contemporary issues, urban plays’ “stood to challenge the ‘haze of sentiment and nostalgia’” that seemed to permeate the early Abbey repertory (18); moreover, urban drama often advanced a realism and a political critique—particularly on the topics of slum landlordism and governmental complicity in the deplorable conditions of Dublin tenements—that some of the Theatre’s better-connected patrons might have found disquieting. A myriad of factors including nationalism thus militated against the proliferation of urban plays in the Abbey’s repertory.

Still, many of these plays found appreciative audiences and the Abbey (and other theatres as well) produced and reprised them frequently. One chapter of The Urban Plays of the Early Abbey Theatre details the plays of W.F. Casey, whose The Man Who Missed the Tide (1908) was the “first Abbey play to identified by Abbey publicity and critics as ‘urban’ or ‘metropolitan’” (44); it was so popular that it was revived six times within a year of its premiere in February, 1908 and sixteen times before 1923. Casey’s second Abbey play, The Suburban Groove (1908), a middle-class comedy set in Dublin, was similarly successful and received numerous revivals. This success notwithstanding, the more politically resonant urban-based dramas hearken back to the model of what is arguably the first of this “minority genre”: Frederick Ryan’s The Laying of the Foundation (1902), produced by Willie Fay for the Irish National Dramatic Company before the Abbey was opened. W.B. Yeats wanted to produce the play at the Abbey after Ryan’s death in 1913, but no script of the play, which traces a young protagonist’s efforts to reveal the identities and political manipulations of a cadre of wealthy slumlords, had survived.

This more ambitious variety of urban drama comprises the intellectual center of Mannion’s project, and later chapters are devoted to unpacking their various political aims. The book’s fifth and strongest chapter, “Public Spaces: Metatheatricality in the Dublin Plays,” reinforces its author’s emphasis on location and the power of dramatic setting to leave long-lasting impressions on its audience. These include plays like St. John Ervine’s The Critics, or a New Play at the Abbey (1913), the set for which is the lobby of the Abbey Theatre, and Lennox Robinson’s The Critic, or a Tragedy Rehearsed (1931). Both plays lacerate the viewing public, and the insipid characters in Ervine’s play support Mannion’s inference that “When they are not on guard for how the Irish are portrayed on the national stage, they [the public] are blissfully ignorant of the play they have come to see” (79). In this case, that play is Hamlet.

The remainder of plays discussed in this chapter and in two subsequent ones, however, concern topics far more serious than the fatuity and provincialism of Dublin audiences. These include Hugh Hunt and Frank O’Connor’s The Invincibles (1937), Roger McHugh’s Trial at Green Street Courthouse (1941), and Seamus Byrne’s Design for a Headstone (1950), which deal with sensational and historically-based trials and prison conditions. For Mannion, such plays suggest that “fueling the flames of heightened nationalism carries consequences that undermine the movement’s objectives” (101), one of many instances in which she juxtaposes nationalism with urban realism, implicitly asking if the nation-building project can comfortably accommodate such an aesthetic. What she describes earlier as the “constructed” notion of an “authentic” rural Ireland gives way in such plays to a crushing modernity of violence, incarceration, and—the most devastating of all—poverty.

Two later chapters on tenement drama and labor activism address this last, most disturbing, and one might say more global matter as the Abbey stage, beautifully sized to represent small peasant cottages, could be transformed to depict the claustrophobic and decrepit rooms in which entire families languished in poverty. Sadly, plays like A. Patrick Wilson’s The Slough (1914) and Joseph O’Connor’s and Oliver St. John Gogarty’s Blight: The Tragedy of Dublin (1917) no longer remain in the contemporary repertory, though readers of James Plunkett’s devastating novel Strumpet City (1969) might easily imagine how the dispiriting, even inhumane, living conditions he describes might be realized in representing the living conditions of Dublin’s working class tenement residents.  Blight, a commercial success, was reprised several times and then never again, a “limited longevity” perhaps because it was too politically “hot” for the Abbey board (110). The Slough braids the issue of poverty with contemporary labor actions, and it is in this coupling that Irish drama of the century’s second decade both inspires Sean O’Casey and anticipates the ascent of these topics on London and New York stages in the 1920s and 30s: Elmer Rice’s Street Scene (1929) and We, The People (1933), Clifford Odets’ Awake and Sing! (1935) and Waiting for Lefty (1935), and many more. Immigration and the Great Depression combine to push urban poverty and workers’ rights to the forefront of contemporary debate, competing with nationalism for hearts and minds as every viewer of O’Casey knows. Elizabeth Mannion’s valuable study reasserts the importance of a theatre responsive to such conditions and, in the process, adds much-needed substance to this heretofore slim chapter in Irish theatre history.