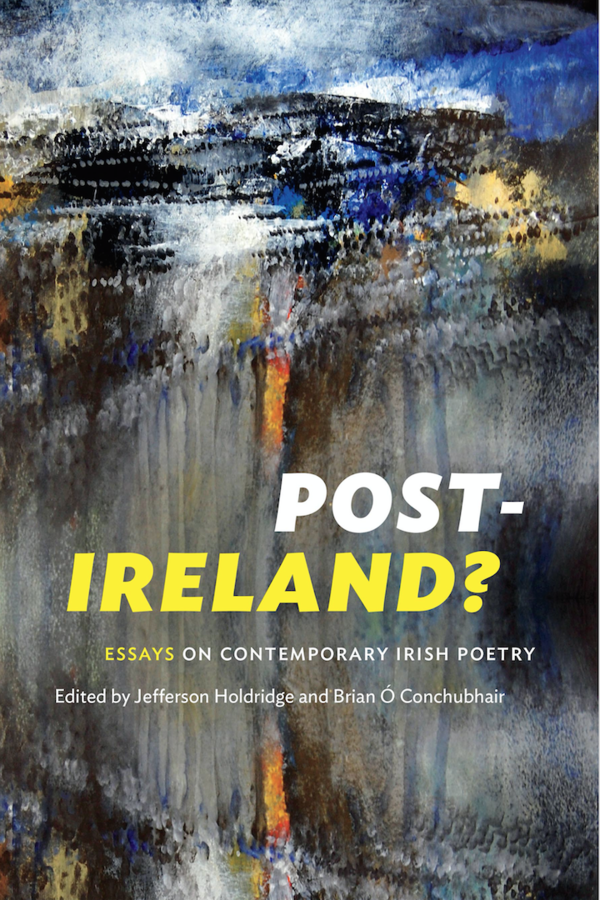 Jefferson Holdridge's and Brian Ó Conchubhair’s Post-Ireland? Essays on Contemporary Irish Poetry brings together fifteen essays by both established and emerging scholars. It ranges through the territory called contemporary Irish poetry, though the parameters of Irishness are a frequent topic of debate among its contributors. Some essays are on broad topics—rhyme, poetry’s tense relationship with theory, Irish-language poetry in contemporary times—but most focus on specific poets: Declan Kiberd and Florence Impens consider Seamus Heaney from two different perspectives, Kelly Sullivan and John Dillon place Derek Mahon and Nuala Ní Dhomnaill in a transnational space, while Jefferson Holdridge, Ailbhe Darcy, Ailbhe McDaid, and James Chandler wrestle with Irishness by discussing particular poets who stretch the boundaries of this category and are often bothered by it. Several essays focus on poetic form, such as Daniela Theinová’s piece on Aifric Mac Aodha and Nathaniel Myers’ on Paul Muldoon. They showcase the multiplicity and mutability of Irish poetry by discussing work written by poets residing outside and inside of the two Irelands, writing both in English and in Irish. Common to all the essays is a need to place their concerns in a broad perspective. Perhaps the political and cultural landscape of Ireland changed so dramatically throughout the twentieth century that it cannot be ignored or made to serve as a neutral backdrop for specific literary questions. The twenty-first century cannot pretend it has emerged ex nihilo. These essays are remarkably cognizant of the ways in which literature is complexly grounded in what we unsatisfactorily call the “real world.” Bearing in mind Seamus Heaney’s reminder that literary artistry reflects the intellectual and emotional commitments of the writer, the work of literature and literary history cannot be viewed abstractly, and in this way, literature can never be entirely “post” or “trans”: it will remain attached by innumerable roots to the ground from which it grows. Indeed, this book leaves the reader’s perceptions of national identity productively unsettled.

Such unsettling is exactly what we need today. We cannot take for granted that categories such as “Irish”—or, indeed, “English”—are unitary and self-evident; yet we also cannot blithely jettison them altogether. The introduction to Post-Ireland throws down a gauntlet in its opening sentence: “With certain members of the younger generation of Irish poets, there is what may be termed a post-national, trans-historical urge, which often but not always has an inward and/or metropolitan focus” (9). There are plenty of qualifiers here, but the challenge is still clear: a new generation of poets wishes to move beyond narrow categories of nationality and historical positioning, while readers of Irish poetry will recognize that such categories form the scholarly foundation upon which this poetry is studied.

Skeptics will ask what sorts of descriptive terms we can substitute for terms such as “contemporary,” or “Irish,” or “poetry.” Yet perhaps nation-based definitions of Ireland are beginning to look a bit worn out. Of course, Ireland, with or without scare quotes, will remain a presence in the lives of all who come into meaningful contact with it, but it can be reified and conceptualized in very different ways: as a material, political, geographical, cultural, or fantastical place; as the product of nostalgia; or as an entity still being formed in a freshly globalized cultural network. Moreover, writers who forge links with other countries—or, for that matter, émigré writers—do not necessarily deracinate themselves at all (often, quite the opposite). The strength of this volume may be the extent to which its constituent essays address the issue of post-nationality in unpredictable, often provocative ways. If they share any opinion, it is the opinion that Ireland cannot be conceptualized in a unitary, immutable manner, and hence the question of moving beyond (“post”) it is unanswerable.

Decades ago, a young Derek Mahon wrote that soon, the question of whether someone is really an Irish writer would clear a room in seconds. Perhaps that time is finally coming. Identity is a tricky thing. It is so mutable that perhaps we should stop theorizing other people’s identities altogether. As Theo Dorgan makes clear in his contribution to the volume, the poets themselves are tired of the critical terms we have used to discuss their work, and this is putting the matter gently: his essay is suffused with anger at the way that the critical industry, which has formed a possibly unwitting and definitely unholy alliance with the market, has alienated the very authors whom it tries to support. He makes the important point that our descriptive identitarian categories may be inherently prescriptive and exclusionary, so that even if we may seem to be (and may try to be) inclusive in our focus on one particular identity, we are in fact strengthening its exclusionary confines. Dorgan asks us to revisit the very categories that we use to describe literature. As a practicing poet, he feels that poetry often plays second fiddle to theory in our contemporary academic culture, so that we read it through the lens of theory instead of vice versa. The Procrustean beds of identitarian categories—such as “Irish,” which Dorgan sees as a commodified “brand” today—are harmful for both poets and readers. We readers can overlook the most interesting aspects of a poet’s work simply because she is branded in a certain way. He goes so far as to say that the Irishness of a poet is almost always her least interesting aspect.

Dorgan’s essay is the angriest one of the volume. Most of the authors here take on the issue of Irishness, but often from the other way around, by identifying ways of writing that stand out as especially noteworthy, or that are uncannily pervasive, in the broadly defined field of Irish literature. Two very different examples are furnished in essays by Matthew Campbell and Eric Falci. Campbell asks why rhyme would be such a popular technique to use in Irish poetry, persisting throughout several centuries. He points to the presence of rhyme in poems that do not call attention to it, offering the modest disclaimer that rhyme may not often look like “the important thing” to study, yet should be accounted for (28). Whether we wish to theorize it or not, rhyme is a component of much Irish poetry. Writing about poetic form from the other side of the issue, Falci asks why Ireland has not produced a strong post-Poundian tradition of experimental poetry. He is particularly interested in poems that decenter or fragment the speaking subject, and he cannot hide his disappointment that there are so few of them coming from Ireland. Yet, as he concedes, while contemporary poets have not stepped beyond “the broad boundaries of first-person poetry,” they have indeed “tested those bounds” in every way (59). This probably has much to do with the political and religious crises that have compelled response in the twentieth century. Even the very deliberateness of Seamus Heaney and Eavan Boland’s focus upon the first person may be seen as a testing of boundaries: these two poets, singled out by Falci but also by other contributors to the volume, foreground the first person in a way that necessarily destabilizes it, forcing us to ask how it is constructed, and how deliberate, inorganic a process such construction may actually be. The crises of modern Irish history may compel us to reevaluate the very boundary between the first and third person. Even a poet such as Yeats (so far from the post-Poundian tradition), defending his choice of traditional form, compels us to complicate the issue by crying “I am a crowd, I am a lonely man, I am nothing.”[1]

Moving away from the island, we may conclude that Irish poets find their identity expanded in unforeseeable ways once their work enters the public arena and the endlessly protean literary tradition. Omar Hena’s essay offers a fitting conclusion to the volume by showing how contemporary Anglophone poets look to Ireland, particularly when it comes to reckoning with the consequences of modernization. This is a refreshing way to take on the subject of Ireland’s place in the global republic of letters. When Pound triumphantly announced, in 1931, that the English language was now in the keeping of the Irish, his flair for overstatement might have pointed toward a reality only visible in retrospect. As Hena moves through his series of examples, he reveals how “Irish has become a translatable identity” (362). To be sure, this is an identity sometimes reaffirmed by rebuttal and rejection. But it remains imperative to recognize that identity can be formed interculturally. Just as the political situation of postcolonial Ireland is put in relief when put in comparative perspective, as against the situations of other postcolonial or decolonizing countries, so cultural entity can and must be seen as hybrid. This essay collection productively interrogates many of the assumptions on which literary study is based. It is to be commended for not artificially imposing unity upon a divisive topic, but letting its contributors’ voices remain urgently, incorrigibly plural.