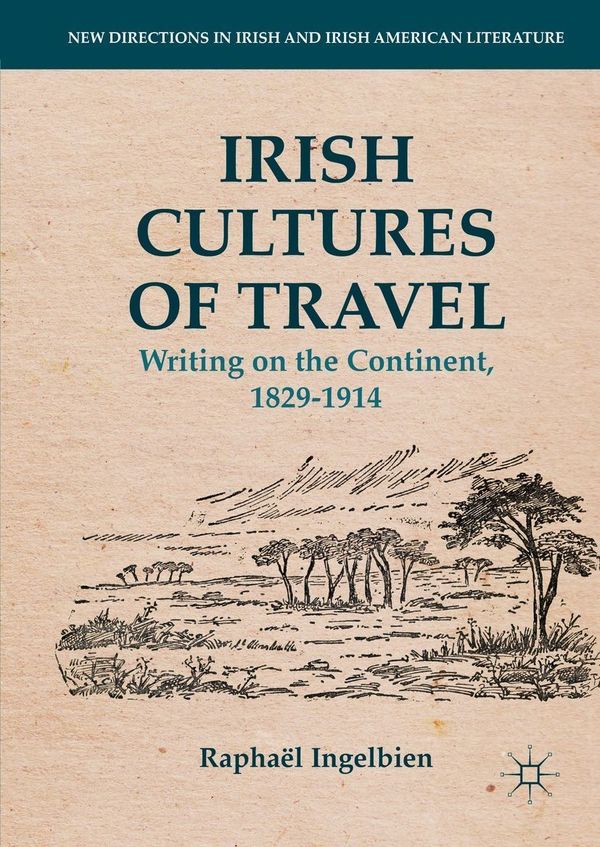 Raphaël Ingelbien’s Irish Cultures of Travel: Writing on the Continent, 1829-1914 is an engaging, highly readable, and frequently insightful treatment of a fascinating and hitherto neglected area of travel and tourism studies. At least since Dean MacCannell’s sociological study of The Tourist: A New Theory of the Leisure Class (1976), a steady stream of scholarship has explored the complexity of tourism and its ideological embeddedness. Not surprisingly, research on British tourism in Ireland has yielded powerful insights into the ways in which tourism and travel could be made to underwrite or contest one construction or another of national identity. For example, several of the essays in Benjamin Colbert’s Travel Writing and Tourism in Britain and Ireland (2012) explore the power of tourism in Ireland to underwrite particular constructions of Ireland in its relation to Britain.

In contrast to virtually all scholarship on tourism and Ireland, which takes Ireland as a destination and the Irish people as figures in its landscape, Ingelbien’s interest is in the Irish tourist, primarily on the continent, but also, in later chapters, in Ireland itself. Though thoroughly grounded in cultural history, Ingelbien has wisely chosen to organize the chapters around some of the different factors that defined the Irish tourist between Catholic Emancipation in 1829 and the Easter Uprising in 1916: for example, the rise of mass tourism, the influence of Catholicism on Irish tourist behavior, the construction of the Irish female tourist, and the challenge to continental tourism posed by promoters of domestic tourism.  The general tendency is chronological, with an early chapter on the beginnings of Irish tourism and later chapters on the rise of domestic tourism and James Joyce’s “The Dead,” but the thematic rather than chronological emphasis may contribute to a more nuanced and historicized examination of those factors.

Implicitly answering the pervasive constructions of Ireland as some pre-modern foil to England (a construction promoted by Irish cultural nationalists), Ingelbien illustrates quite clearly the engagement of the Irish people in that quintessentially modern practice of tourism. Furthermore, consistent with what we know of modern tourism, Irish tourism became a field within which ideological positions could be enacted, contested, and transformed. As he writes, “Irish cultures of travel, in short, were plural and jostled with each other for influence, but with an urgency and arguments that reflected the contentious and fractured public sphere of Victorian and Edwardian Ireland” (228-9).

Readers familiar with recent scholarship on tourism will recognize much in Ingelbien’s account of Irish tourism, but what is most fascinating is the way in which familiar motifs of touristic discourse are refracted through the changing and competing arguments about what exactly should constitute Ireland and Irishness. Ingelbien points out, for instance, that in 1844, Young Irelander Thomas Davis urged would-be Irish travelers away from the pleasures of mere sight-seeing and toward a utilitarian culture of travel: they were to learn what they could about foreign practices and bring that knowledge home to advance the condition of the Irish people. Later writers, for whom Ireland’s ways needed no injection of European wherewithal, urged the Irish to travel the continent as an exercise in national pride, visiting battlefields where Irish soldiers had fought and died or the burial places of the Wild Geese or other Irish exiles. Likewise, as the Gaelic revival turned away from the materialism and utilitarianism of modernity, so too were Irish travelers urged to find authentic experiences in rural, pre-modern settings.

Perhaps the most interesting argument Ingelbien makes is that while many of these cultures of travel shared key features with English cultures of travel at the time, those features were made to signify national rather than class identity, as has been frequently observed in scholarship on English travel and tourism. Ingelbien draws heavily on the work of James Buzard, both confirming and complicating Buzard’s conclusions through their application to the Irish tourist. Buzard’s most important contribution to the field of tourism studies is his idea of “tourist and anti-tourist,” the idea that from the very beginning of modern tourism at the end of the eighteenth century, the tourist has eschewed that appellation and sought to validate his or her experience as something other than that of the mere tourist. Typically, that denigration has operated along class lines: lacking the sophistication, originality, and cultural capital needed to appreciate more subtle or unusual sites, the mere tourist was one who trooped uncritically from one common site to the next. Furthermore, derogatory depictions of the tourist tended to invoke working-class stereotypes: they were loud, drunken, physically unattractive, and lacking in any social grace. By contrast, the traveler’s search for more “authentic” experiences off “the beaten track” (the title of Buzard’s book) marked his or her cultural and class superiority.[1]

In advancing one or another “Irish culture of travel,” usually in opposition to other cultures of travel, the writers Ingelbien examines play on the same opposition between authentic and superficial modes of travel. Like English writers on travel and tourism of this period, they lament the superficiality and philistinism of those tourists who follow the more conventional routes and urge their readers to distinguish themselves as authentic travelers by seeking out more meaningful sites and experiences. Yet for these writers, what is ascribed to class difference elsewhere is associated here with national identity, as “Irish nationalist commentators attempted to replace the distinction between swarms of crass tourists and individual cultivated travellers with a contrast between Irishmen and Britons abroad” (76). Laments by these same commentators that the Irish masses on holiday too often behaved in a manner more befitting the English illustrate the tenuous nature of such national distinctions but also the urgency felt by these commentators in making them.

Although at several points in the book, Ingelbien claims to be taking a “reader-oriented approach” (e.g. page 11), his methodology is quite resolutely constructivist, and in that model he has done an excellent job of examining the textual construction of the figure of the Irish tourist in mainstream media aimed at the Irish reading public, including both journalistic and promotional writing. Theories of readership across the spectrum (from Louise Rosenblatt to Wolfgang Iser to David Bleich and Stanley Fish) invariably theorize either a more active role for the reader or at least the means by which a reader’s response is prescribed. Ingelbien does not engage with any theories of readership, nor does he offer any coherent model of his own. Instead, the tourist-reader of Ingelbien’s primary texts is only ever inferred and then as the object, not the subject, of the reading activity: e.g. “Irish subjects were exposed to texts that portrayed foreign journeys in escapist terms” (93; emphasis added) or “Not only were Irish pilgrims portrayed as a national body, they were also regarded as the vanguard of Catholic Ireland” (146; emphasis added).

The unsupported claims of a “reader-oriented approach” are more puzzling than seriously damaging in a work that is so effective with its own very different approach. The book’s one real weak spot in the eyes of this reviewer is its silence on the subject of gender outside of the single chapter devoted to “Sisters Abroad: Constructing the Irish Female Tourist.” I would like to have seen some discussion of how the construction of that figure of “the tourist,” though linguistically unmarked by gender, might have been inflected by considerations of gender. How might gender have played out, for example, in how “Catholic Spaces [were] Seen Through Irish Eyes,” or in the question of “Home or Abroad? ‘West Britons’ and Continental Travel” (to name just a couple of other chapters)? Not every chapter or every book has to address gender, but by treating the “Irish Female Tourist” as a gender-marked exception, the book perpetuates a blindness to the ideological pervasiveness of gender more broadly.

Indeed, the very plausible argument of that chapter, that the Irish female tourist is constructed as another embodiment of the Shan Van Vocht or Cathleen ni Houlihan, is oddly lacking in evidence or conviction. Consistent with the book’s great strengths elsewhere, Ingelbien does show “how the New Woman phenomenon could sometimes merge with the ideology of Irish nationalism in a joint critique of Anglo-Saxon values” (178), and shows how mercenary and matrimonial motivations were enlisted in the construction of the female tourist, usually by cynical male authors. But the principal illustrations of the Shan Van Vocht phenomenon are two works at least ostensibly by women authors whose own political rhetoric seems to identify them more with their male compatriots than with the quasi-mythical figures of legend. Given the importance of that figure in Irish constructions of femininity generally, one might reasonably hypothesize its role in the construction of the Irish female tourist, but if the case is no stronger than Ingelbien has made it, it is a hypothesis to be discarded.

The final chapter offers something of a dessert: if not the game-changing reinterpretation of James Joyce’s “The Dead” hinted at in the Introduction, then at least a delightful application of those “Irish Cultures of Travel” and the wealth of unfamiliar primary material on which his argument has been based to a close reading of a story with which readers will almost certainly be familiar. Through the lens of the previous seven chapters, we see the sparring between Gabriel Conroy and Molly Ivors over the merits of a continental versus an Irish holiday as more than a contest between nationalism and cosmopolitanism. We see behind that dialogue a century’s struggle to define the role of the Irish traveler as a figure for Irish national identity more broadly. Through that lens, both Molly and Gabriel emerge as more complex characters and more ironic in ways that we might not otherwise have recognized.

Scholars of tourism may wonder at Ingelbien’s excessive citation of a just a few earlier works on tourism (mainly Buzard and Marjorie Morgan) and the omission of some equally relevant work (especially Dean MacCannell, whose work might have deepened Ingelbien’s analysis of the Irish tourists’ engagement with continental sites).  But Ingelbien has provided a compelling narrative on his own terms about a hitherto neglected area of study.  Free of any unnecessary jargon, this highly readable book will be useful for students and a pleasure for scholars as well as general readers whose interests include travel, Irish studies, or even post-colonialism generally.