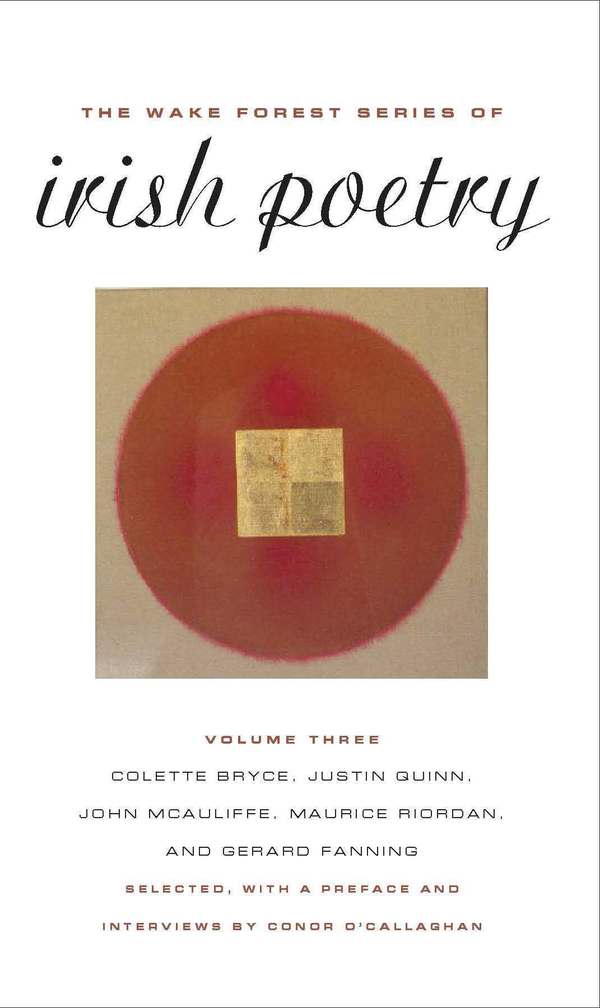 Conor O’Callaghan might be talking about his own poetry in the introduction to this terrific gathering of five contemporary Irish poets when he says that each “has long since got beyond the jaded fixities of land and history and faith and nationhood.” To this he adds, “If the poets here are collectively indicative of any one thing in Irish poetry, it is of a reaction that occurred gradually towards greater formal determinism, a more international perspective, empiricism, rationalism and wit” (xv). In that odd but satisfying phrasing—“a reaction … towards”—O’Callaghan describes the turn away from free verse and “the quasi-mystical” in poetry written from the ’90s onwards, as well as an opening to new subject-matter and modes. And in his praise of the shucking off of jaded fixities in favour of internationalism, he tempts the paradoxes of liberation through “formal determinism,” leaving Ireland and one version of its poetry behind. “If postmodernism means anything,” he says, “it means choosing one’s own traditions from whatever source” (xvi).

Yet this is undeniably an Irish anthology and not just because of shared geographies of origin, be they from Derry (Bryce), Cork (Riordain), Kerry (McAuliffe) or Dublin (Fanning, Quinn). O’Callaghan has conducted insightful and thoughtful interviews with all of the writers gathered here, and they all revert to matters of land and history and faith and nationhood, particularly the localities of place, the anxieties of education, and the importance of the coterie. All but Fanning live and work in Britain or Europe, but when O’Callaghan challenges the Manchester resident, John McAuliffe, that his poem “North Korea” is really about North Kerry, McAuliffe answers back with an old question often asked of the Irish writer: “‘Does any writer feel ‘at home?’” (104).

Not being in Ireland has for centuries been a major part of the Irish diasporic experience; so how does this differing conception of the Irish poet manifest itself here? These poems are by turns recognizable in the generic expectations of the Irish poem: lyric, regional, autobiographical, historically acute, increasingly exploratory of gender and sexuality, frequently seeking love. But they are also utterly fresh in their subject matter: the Loki Indians (Riordain), Ukrainian construction workers (Quinn), the English spy Kim Philby (Fanning), the Telstar satellite (Bryce). The latter appears in the midst of a childhood memory of sorting the small change from a Derry bar:

Part of the task was to separate

the rogue harps and leaping fish

from the Queen’s head; the odd button

even an errant dime or quarter

that had found its way across the water

bearing, on the backward swell

of the great Atlantic wishing well,

via the till of the Telstar Bar,

news of Brooklyn, or Manhattan (24)

The stanza shows much of the obliquity of Paul Muldoon, both in the embrace of the “formal determinism” of rhyme (“button” and “Manhattan” is particularly good) but also in the corresponding freeing of the geographical imagination. That is achieved by the slyness in the extra-terrestrial joke (there is an actual Telstar Bar in the Creggan in Derry), the multiple currencies of ’70s Northern Ireland a few miles from both the border and the Atlantic, and the memory of war, an imperative to exile: “there’s nothing left / in this doom town for us,” the speaker’s father states in the previous stanza (24).

So this looks like a bunch of poets having it all; Irishness and internationalism, the old multiplicity of locality and emigration, the paradoxical certainties of bi-located form in which many Irish poets have chosen to work. This can result in the virtuosity that has been the stock-in-trade of this strain of Irish poetry, sometimes a wilful showing-off, yes, but also a strong sense of a trade hard won and even harder in the demonstration. If Irish poets continue to learn that trade, it primarily means to sing what is well made, and the handling of syntax and stanza is paramount. There are big things here: Quinn’s “Days of the New Republic” or “Ukrainian Construction Workers,” Riordain’s poem about untranslatability, “A Word from the Loki,” the extraordinary four-page single sentence which is “The Sloe,” the prose parables of his “Idylls.” Bryce adds an intensity of research and political implication to her exploration of the old trope of the Irish anorexic body, in “Form.”

These are substantial poems, beyond the scope of a review to do justice to. But to pause on McAuliffe’s “Aerialist,” particularly in the light of Yeats’s injunction about singing what is well made, we can see this attention to form gain a new dimension in its engagement with changing subject matter. The poem tells the tale of an outing to the circus during a family holiday, spoken in the voice of a reluctant father: the tickets were “20 euro a head. I cursed the Celtic Tiger…” (131-132). It is dedicated to the acrobat Vitaly Kharapavitski, and it goes on to tell of his death in a stunt gone wrong. In lesser hands, this material could be forced into sociocultural “significance”: the family horror, the accompanying pity for an exiled Belorussian, hand-wringing on the fate of the eastern European diaspora. Paul Durcan might get away with that; indeed, this might have been better material for a short story. Instead, we get a grim Kerry entertainment gone wrong, transmuted into a delicate elegy for Kharapavitski. McAuliffe pulls this off through a combination of syntactical indirectness and command of the determinism of form; here, the alexandrines baggily sitting in a seven line stanza that runs through seven loose irregularly-rhyming stanzas. This is Yeats territory, handling a big-rhymed stanza, and cannot avoid looking like a truncation of the ottava rima of a poem like “The Circus Animals’ Desertion.” Yeats’s poem might indeed be playing in the background, if at a number of removes. His animals and stilted boys and “Lion and woman and the Lord knows what” are resolutely allegorical—albeit a fled allegory (Collected Poems 347). In “Aerialist,” Kharapavitski and his colleagues and family haunt the experience, and the horror of the accident is given narrative focus against a sketch of two Irelands meeting each other, the “Royal Russian Circus” and the brief prosperity of the one figure from allegory allowed here, the aforementioned cursed “Celtic Tiger.”

McAuliffe gives us this version of a Yeatsian foul rag and bone shop:

We’d seen in Rosbeigh, pre-show and a week earlier,

hanging around, nerveless and going nowhere an elephant,

a giraffe, and between them a zebra. Canvas and steel

were shaped into a marquee. And from behind Coonamasharn

glider after glider hung in the sky, coasting away clear to the north,

a new bungalow advertised art, another a scuba school

and night kayaking in the phosphorescent ocean

by which that night, stars and stripes on each enormous brow

while the giraffe nodded, stately and gawky, and a shabby lion

made his unheard-of roar, still a memory on each nearby farm.

A crowd of method actors, the circus animals, though

instead of a tiger the MC, for the sake of form,

This avoids any superiority over the tackiness of the event, offering instead the children’s wonder at the animals, the strange sights of a fleetingly prosperous modern Ireland (gliders, bungalow, kayaks), and the figure of the clown, merely there “for the sake of form” (which rhymes with “the lion’s roar, still a memory on each nearby farm”).

Earlier in his career, McAuliffe had worked with Metre magazine (published between 1996 and 2005; the complete archive is available at http://metre.ff.cuni.cz/) and O’Callaghan rightly draws attention to its influence over what has by now become a “middle generation” of Irish poets. One of the founding editors was poet, critic, and now novelist, Justin Quinn. The generous selection here from the five full-length volumes he has published thus far, along with a pointed and typically rigorous set of replies to O’Callaghan’s questions in interview, lies at the polemical center of this anthology. Of course, polemic might be at odds with O’Callaghan’s virtues of “empiricism, rationalism and wit,” which look positively Augustan in this context, appearing readily under the guise of satire (xv). In Quinn’s strictures on half-rhyme—say, “I really don’t see any point in half-rhyme; either rhyme it or don’t”—there might indeed be a re-emergence of the coupleted ironies of Swift or Pope (46). Dryden makes an unexpected entrance in Quinn’s roll-call of favourite poets, and he introduces his greatest contemporary influence, Richard Wilbur, also in unexpected ways: “he’s one of the last ambassadors of the Cavalier style, like the last of the Gaelic bards” (48). For all Quinn’s internationalism, only an Irish poet could offer such an insight. This would be all very well if we were then to turn to a forbidding hieratic voice, saturated in American formalism or neo-classical ironies. But there is a tenderness in the love poems, an odd dislocation in the poems of Eastern European living, a half-satiric / half- nostalgic attraction to “home.” “Even Song,” “Elegy,” and “Nostalgia” are so clearly engaging with the Irish poem of place, in this case, the changing city of Dublin. “Seminar” and “Russian Girl on Pařisžka” tell of the new locations of European culture after the fall of the Berlin Wall. The villanelle, “A Strand of Hair,” is a one-poem argument for the pertinence of strict form for the contemporary poet and an exquisite love poem, naïve, and sophisticated by turns.

Of course other versions of Irish poetry remain here, and the great themes of modernization and memory track through Riordain and Fanning’s work—for both, the coming of electricity is a family memory. Fanning’s “Matt Kiernan” takes on one of the oldest subjects in Irish poetry in English, the shift across from the Gaelic to the English tradition, the resilience of Irish music, and the persistence of belief in the real thing. Kiernan was a Dublin Garda and pipe-maker, and Fanning has him tell us “how rhythm runs / Like a finger through a stencil in his brain” (202). This offers itself as one model for art, perhaps the opposite to Quinn’s answer to O’Callaghan’s question about his “determination to stanza and rhyme”: “The form becomes a mode of thought, not a mould for it. A way of measuring breath and cadence. Which is a way of life, and a trajectory of emotion and sensibility” (48). Whether “mode” or “stencil,” the poem, like the musician, needs to find form for the authentic, which is an ethical imperative as much as an aesthetic one. And these poets, for all the “postmodern” gloss O’Callaghan puts on them, are aware that such achievements can occur in the moment of art. “Matt Kiernan” phrases this moment thus:

And the battery bleeds in its cage,

So when at last he plays

The air is as true

As the quiet inflection of easter snow

There is fixity of a sort here, though not of the jaded variety, in the sound of the piper. Traditional music or postmodernism, there is a breadth of subject-matter and style on show throughout this generous anthology, offering many signs that Irish poetry can still play the true air and maintain a trajectory of emotion and sensibility.