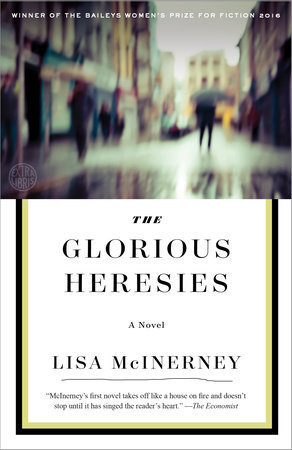 Mention Irish crime fiction, and most readers’ minds will gravitate towards one of two cities: Dublin (Tana French, Benjamin Black, Declan Hughes) or Belfast (Bernard MacLaverty, Eoin McNamee, Stuart Neville), with the occasional exception of Galway (Ken Bruen). Cork, however, the setting of Lisa McInerney’s debut novel and future television series, would not always pop into our minds. Perhaps the reasons for the novel’s early praise and contract for adaptation will be no surprise to first-time readers who quickly realize that the novel is Cork’s own version of Keith Ridgway’s The Parts (2003). The work features a broad cast of characters, all of whom interact in initially mysterious but ultimately all-too-clear ways with a good deal of violence and mayhem in between.

The Glorious Heresies is driven by Ireland’s history of silencing and concealing women and children, yet it is ultimately a crime fiction Bildungsroman about Ryan Cusack, the son of a crime-ridden Austerity Cork. Ryan tries repeatedly to avoid a life of crime and, more broadly, failure. While another female character, a prostitute named Georgie, plays a prominent role in a murder at the beginning of the novel and Ryan’s change of conscience toward the end, the novel concludes with Ryan’s future firmly in Cork, with Georgie living in exile and hiding in London. Ryan’s father, Tony, is ensnared in a murder conspiracy with local crime boss Jimmy, whose mother Maureen begins the novel by committing a murder with a religious relic, and by the end of the novel attempts to take Ryan under her wing. Ryan’s relationships with women figure larger than his relationships with men. His entire social sphere beyond drug dealers consists wholly of his girlfriend, Karine D’Arcy, and a prostitute neighbor, Tara, who has an inappropriate attraction to Ryan given her age. His father Tony is a frequently absentee alcoholic who abandons Ryan at one point to the fate of a prison sentence.

The depth of characters is sometimes distracting, but ultimately creates a clear picture of the Ireland that created Ryan, with the implication that generations of silenced or abused women have led to a contemporary Ireland in which unfit fathers raise neglected children. The novel pivots around three generations of failed parents and disappointing children, as well as the marginalization and silencing of women, particularly mothers, by religious ideology and phallocentric cultural acceptance of this silencing. Women seem to possess knowledge to which men are not privy, and this knowledge is often not a subject of public discussion. The novel opens with two plot lines surrounding Ryan Cusack, the novel’s antihero protagonist, and Maureen Phelan, the formerly estranged mother of Cork crime boss Jimmy Phelan, who both wishes she had remained estranged and has quite the heretical streak. The simultaneous disappointment of one’s mother and disapproval of the church is apparent in the initial murder. Maureen has just killed a man we later learn is Robbie O’Donovan, boyfriend to addict and prostitute Georgie, with a piece of the true cross, and frequently reminds her son that she has no desire to stay in a house where she has just killed a man (and a house that formerly used to be a brothel, yet another reminder of a cultural abuse of women her son both ran and approved of). In considering her options, Maureen ponders, “it might be jolly to ring for a priest, just to see how God and his bandits felt about it” (12), before dismissing the idea after deciding she would have to kill the priest, too. She of course has reason to distrust the church and any moral authority in Ireland; as a single mother, she had been forced by her parents, religion, and Irish cultural custom to surrender her only son James, or Jimmy, many decades prior.

In fact, women being forced to surrender their children in some fashion is a common thread throughout the novel. Jimmy had only found Maureen in the 1990s in London; as his profession does not exactly make his mother proud, Maureen indicates frequently that she would have rather never been found by him. Ryan and his five siblings are cared for by his father Tony Cusack, a violent alcoholic whose younger wife, also an alcoholic, died in a drunk driving accident when Ryan was a small child. Georgie is impregnated by another cocaine addict while they are both staying with a religious cult, and the addict’s family have no problem, with the assistance of the cult, in taking Georgie’s infant child away from her, the implication being that the child will be better cared for by a male addict than a female one. Neighbor to the Cusacks and prostitute Tara Duane has a daughter whom we rarely see, and Tara’s fate also takes her away from her child.

The generation who appears to have failed both their forebears and offspring the most is the generation who came of age during the Celtic Tiger and seems morally adrift. They are largely responsible for an Austerity Ireland in which numerous displaced women and addicts (frequently both) can only be cared for by their absentee parents and children or by well-intentioned but ignorant religious cults. Jimmy and Tony loom large here. Both are the same age, and both are bonded by a shared secret. Jimmy called upon Tony to help him dispose of Robbie’s body as a favor to Maureen, and Tony lives in constant fear that Jimmy will ultimately kill him because he knows the identity of the victim. Both, however, have failed their forebears and children, respectively. Jimmy becomes increasingly aware of this fact after Maureen lashes out and burns down a church. He believes that “to have grown up into…whatever he was” as a crime boss certainly did not make her proud, and even that “His just being alive had ruined her life” (351).

Cork becomes a fascinating character as well. In a sense, globalization has expanded the borders of the city while not leaving any wealth or social welfare services to care for its many outcasts who wander its streets in isolation from one another. Jimmy ponders these generational shifts since his mother’s time and realizes, “The city was a smaller place then, and the people’s expectations matched. Now the world had burst its banks and no one had anything in common with anyone anymore” (193). Globalization has somehow made a small place so large that even crime boss Jimmy cannot control the way he believes he used to.

The varied perspectives are interesting, but it takes a while for the italicized interludes to clearly establish the theme of the novel. As a crime fiction Bildungsroman, Ryan cannot seem to end his doomed relationship with Karine, his less-than-promising career path of drug dealer for which he has already been incarcerated once, and his trajectory of turning into his father Tony, an addict, drunk, and violent abuser of those closest to him. As his cousin Joseph mentions about their Irish upbringing, “We’ve more history than we’re able for” (311). As Ryan tries desperately to keep his life from spiraling out of control, he becomes more and more aware of this truth.

McInerney’s voice is both promising and unique in Irish crime fiction. The varied perspectives make the novel’s overall theme a little difficult to discern at first. However, like French or Black, the prose’s literary merit lies in McInerney’s ability to distill her critique of Austerity Ireland into frequent and stunning passages. When Ryan ponders his future, he thinks, “My city stretches in the dark, and I can no more go back than go forward” (364, italics original). This passage brilliantly depicts a small island where everyone knows Ryan, but no one cares for him or his future. His sense of remaining behind and staying trapped in a cycle of criminal behavior is also his sense of a future, and thus his sense of direction, confused as it is. The sequel, The Blood Miracles, is about Ryan’s continued journey and is out in the UK.