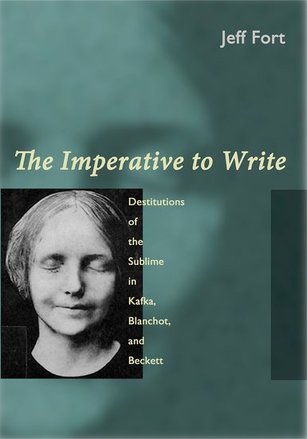 Jeff Fort’s 2014 The Imperative to Write: Destitutions of the Sublime in Kafka, Blanchot, and Beckett is a book of staggering ambition. In grappling with these three notoriously complex and idiosyncratic writers, he interrogates their shared sense of having what Beckett’s Unnamable describes as “a pensum to discharge.”[I] Fort makes three major contentions, each of which are intimated in his carefully worded title. First, he identifies the commonality between his chosen writers as an unrootable compulsion to write, one that structurally reflects Kant’s Categorical Imperative. Second, in the simultaneous negation and affirmation implied by this vocation that lacks the redemptive possibilities of transcendence, Fort observes a “destitution of the sublime” (7). Finally, in the very act of drawing upon an imperative to write, he makes a biographical claim—not, however, in the form of a personal trauma that is in some form reflected in fiction, but rather an irreducible singularity of writing that belies and, indeed, inaugurates, the “radical depersonalization” (13) of the material itself. These claims are subtly interwoven throughout the three sections that each deal with one writer in detail.

The strangely imperious nature of writing for Kafka, Blanchot, and Beckett is, of course, an unexceptional critical observation. Kafka’s “God does not want me to write, but I, I must” (qtd., 19), Blanchot’s “Here I stand, I cannot do otherwise” (qtd., 3) and Beckett’s description of true art as “[t]he expression that there is nothing to express, nothing with which to express, nothing from which to express, no power to express, no desire to express, together with the obligation to express,”[II] are, as Fort himself acknowledges, commonly quoted. What Fort emphasizes, however, is the formal emptiness of this helpless compulsion and hence its affinity to the Kantian Categorical Imperative. He draws on the etymological similarity (as observed by Lacoue-Labarthe) between “falloir (to be necessary)” and “faillir […], which means rather to fall short, to fail” (13), so as to suggest that the force of a compulsion always already presupposes its failure. It is as though, Fort notes, preempting his final discussion of Beckett, “its very force depended on its weakness” (13).

In his identification of a categorical imperative of writing, Fort translates the Kantian sublime into the realm of “radical fiction” (8). For Kant, he emphasizes, the overwhelming experience of the sublime, the “painful trajectory in which the subject is stripped of its world” (7), is redeemed by the vocation it inaugurates. In the works of Kafka, Blanchot, and Beckett, he identifies a far more melancholy “destitution of the sublime” (7): a vocation without end or redemption—except, perhaps, in the process of writing itself. The negation inherent in a destituted sublime is, then, twinned with an always already compromised and often ironic affirmation of the redemptive quality of art—a paradox that Fort subtly traces through B.’s “(Exit weeping)” (qtd., 305) in the “Three Dialogues,” which perches uneasily between jest and pathos. “What is it about ‘life,’” Fort questions, “that requires such a merciless ‘exit’ and such a massive disavowal?” (306). The paradigmatic figure for the destitution of the sublime, however, lies not in Beckett but in Kafka’s eponymous “hunger artist,” whose sublime obligation to fast—“Ich kann nicht anders (I can’t help it)” (qtd., 145)—collapses into banality at the end of the tale, where it transpires that he is merely incapable of finding food that he likes. This, Fort argues, is what has become of the “sublime ‘vocation’” (144) in Kafka: its ultimate destitution. Nonetheless, the persistence of hunger in the absence of a viable object for its fulfilment is a residue of sublimity in the form of melancholy: “the experience of a gnawing craving that has essentially no possible object” (159). The existence of the tale, or “report” (144), itself is the only witness to this “minimal transcendence” (159).

In an academy currently obsessed with the grey material of the archive, Fort’s insistence on the need for a depersonalized autobiographical reading of Kafka, Blanchot, and Beckett is refreshing. In utilizing Kafka’s letters and diaries, he insists that, in a “strange and problematic sense,” these “‘personal’” documents will have always been “‘literature’” (22). In its loosest form, Fort’s argument merely insists on writing’s inevitable singularity: the irrevocable trace of life that can be identified in the most stripped-back text: “writing’s curved trajectory leads back, eternally and again, to the obtrusive stuff of a life that, in the logic of these leavings, really ought to have been left behind” (13). However, he continues to associate these “biographemes” (296) with an acute sense of melancholy, which, he insists, is most vocal in the lyricism that obtrudes into even the most formalized of Beckett’s texts. Perhaps recklessly, he dives into the most personal work, Company, which has spawned a number of autobiographical commentaries from critics relieved by the opportunity it seems to offer to pin down the intangible. Fort uses this text to introduce his sense of the paradox between “formalizing abstraction and obtrusive affect” (298) permeating Beckett’s corpus. And, while acknowledging the presence of “a place recognizable as Ireland—and even as Beckett’s childhood home” (297), he insists on the far more interesting problem of the “return of a past” (195), which, indeed, is acute in the formal experiments of the 1960s that, unfortunately, Fort does not discuss. He identifies a fundamental tension between “the logic of birth” and “the logic of creation ex nihilo” (298): that is, between, on the one hand, the pragmatic claim that a voice—even Company’s apparently disembodied voice in the dark—must have a temporal origin, and, on the other, the fictional convention of an “unlocatable narrative voice” (298) that may escape the burden of temporality. This unresolvable tension leaves us unsure of where priority lies: in language’s impersonality, or in the affective charge that cannot be stifled.

Fort offers a nuanced and intricate exploration of the irreducible compulsion to write manifested by Kafka, Blanchot, and Beckett. Most laudably, he does so without collapsing art and life, instead, with great subtlety, negotiating the competing claims of formalism and singularity, abstraction and affect, that uneasily coexist in the works of these melancholy modernists.