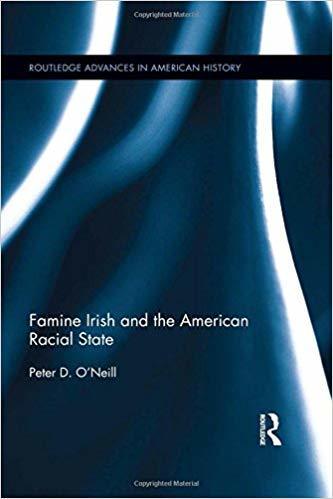 It is a truth universally acknowledged that the Irish were not white until they moved to the United States. The first volume of Theodore Allen’s freewheeling study of The Invention of the White Race devotes considerable attention to British “racial oppression and social control” in early modern Ireland and the model it provided for later anti-Black racism. Noel Ignateiv’s famous polemic seeks to understand How the Irish Became White after they arrived on American shores. David Roediger, in the sober analyses of The Wages of Whiteness, focuses on the ways in which Irish immigrants were conceptually situated alongside African Americans, close to the bottom of the American racial hierarchy. Peter O’Neill’s Famine Irish and the American Racial State explores an essential paradox at the heart of this “Irish-as-Non-White” literature: for sure the Irish were perceived as racially inferior in the years before and after the Famine (or, at the least, were classed as an “off-white race,” the term Karen Brodkin used in her 1998 work, How Jews Became White Folks). And yet, the Irish were still afforded the status of white citizens under the terms of the Naturalisation Act of 1790. In other words, the Irish were classed as non-white in a cultural sense, while still being afford the legal and political privileges of whiteness. Where the cultural assumptions of anti-Irish racism—espoused most famously by the Know Nothings but common throughout pre-Civil War America—have preoccupied Ignatiev et al, the legal issue of the Irish right to US citizenship has hitherto not been properly addressed. For this alone, Peter O’Neill’s book, Famine Irish and the American Racial State, makes an important contribution.

Famine Irish is equal parts political history and literary analysis, with much of O’Neill’s scrutiny concentrating on didactic novels and a smaller amount of self-help manuals written by and for aspirational Catholic Irish-Americans. Yet it would also be accurate to situate this book as a biography, of sorts, of Archbishop John Hughes (1797-1864), the leading Catholic cleric in New York and, at one, time the dominant Catholic voice in the United States. Hughes’s grey shadow is cast over the majority of O’Neill’s historico-literary explorations.

Born in Tyrone on the eve of the United Irishman Rebellion, Hughes was already a devout Catholic before his emigration in 1817. He was educated at Mount St. Mary’s Seminary in Maryland, his entry to the seminary being recommended by Elizabeth Ann Seton, the first US-born Catholic saint. Mount St. Mary’s also gave Hughes an education in New World racial realities; his duties as a seminarian included overseeing the institution’s slaves, an embarrassing point downplayed in later hagiographies. By 1825, Hughes had been appointed a priest in Philadelphia and was already rising to public prominence and using his clerical position to negotiate the headaches of Church-State relations. In 1838, he relocated to New York and was made Archbishop of the Diocese four years later. Hughes was thus ensconced in perhaps the preeminent position of American Catholicism just as the Famine Irish began arriving in huge numbers.

O’Neill picks up on Hughes’s support for a parochial school system (a separate Catholic school system condemned by nativists but in fact acting to Americanize the Irish), his shaping of Irish Catholics into a powerful voting bloc, his activities as an emissary to Catholic Europe during the Civil War, his support for the US war effort and efforts to recruit large numbers of Irish men to the US army, both during the Civil War and during the earlier Mexican War (1846-1848). In all of these cases, Hughes urged the Irish to take advantage of their white citizenship rights, and in so doing address and ameliorate their non-white/off-white cultural status; “Hughes paved the way for the Americanization of the Famine Irish by encouraging their active participation in state apparatuses… Crucially, he understood the racial basis upon which the US state rested and worked to ensure the passage of the Famine Irish from despised immigrant to full or ideal American (white) citizenship. It would not be an exaggeration to say that Hughes was one of the most influential ideologues of the nineteenth-century US state” (58). And Hughes ensured that the Famine Irish would be obedient both to their Church and to their new State.

In his discussion of Hughes, as well as in the rest of the book, O’Neill draws deeply on the writings of Nicos Poulantzas, the Greek Marxist state theorist and a thinker who is well overdue a revival. In Political Power and Social Classes (1968) and State, Power, Socialism (1978), Poulantzas developed a sophisticated and layered understanding of how states work; the State is never just the sum of its institutional parts but always works in and through seemingly “private” entities like the Family and the Church. States are also “fractional,” riven by all the divisions that define the ruling class. Where Karl Marx and Friedrich Engels claimed that the “executive of the modern State is but a committee for managing the common affairs of the whole bourgeoisie,” Poulantzas pointed out that there is no one ruling class which can seize the machinery of state.[i]

O’Neill utilizes these ideas to remarkable effect. He pinpoints the heated divisions between “the nativist fraction in the ruling elite” who “bitterly condemned the Famine Irish” and those, like Abraham Lincoln, who welcomed Irish immigrants (12)—the divide between cultural and legal concepts of whiteness was of a piece with this. O’Neill demonstrates how the seemingly private Church under Hughes “played a pivotal role in the development of state structures of power, achieved not only through pontifications from the pulpit but also through the promotion of two other key ideological state apparatuses: schools and the family” (14). Notwithstanding the almost total absence of “race” from Poulantzas’ writings, O’Neill proceeds to show how white racial identity did important work for the fractional US state, uniting southern Jacksonian Democrats, urban workers, and the Famine Irish. More than that, O’Neill ably shows the major applicability of Poulantzas’ ideas to Irish Studies. Yet O’Neill’s Poultanzasian turn does not always run smooth.

In the late 1830s, Hughes declared that Roman Catholics in New York would support their bishop in all situations, “no matter how legal such act may be” (68). It is not clear how this fits with the idea of a Church-State cooperation. At the least, it points to a less harmonious Church and State relationship than O’Neill elsewhere suggests. In 1850, when the anti-Irish and anti-Catholic Know Nothings were at their peak, Hughes fanned their paranoia with the following bombastic pronouncement:

Everybody should know that we have for our mission to convert the whole world, including the inhabitants of the United States – the people of the cities, country, officers of the navy, commanders of the army, the legislature, the Senate, the Cabinet, the President and all! We have received from God what Protestantism never received… a command to go and teach all nations… to convert all Pagan and Protestant nations.[ii]

Thinking of the Church in terms of the State, à la Poulantzas, raises important questions about the statist ideologies promoted by clerics like Hughes. And yet it can elide how the Church is a power-center in its own right, with ideologies, goals, policies of its own. O’Neill aptly points out that the Catholic Church is “the world’s largest multinational corporation” (14); no Church, the Catholic Church least of all, will be willing to remain a mere adjunct of the State. In a later chapter, O’Neill recounts the activities of Denis Kearney, the leader of the Workers Party of California (WPC). He pitches Kearney as someone who acted on behalf of the state, “or at the very least in the state’s interests,” since his party promoted anti-Chinese feeling that contributed to a policing of the population. Again, this seems too neat. In a speech quoted by O’Neill, Kearney told his followers “I will lead you to the City Hall, clean out the police force, hang the prosecuting attorney, burn every book that has a particle of law in it, and then enact new laws of the workingmen” (194). This hardly suggests a close relationship with the state. Likewise, Kearney’s Marxism. And as O’Neill says, “San Francisco elites no doubt feared the Kearney-WPC anti-capitalist rhetoric” (196).

O’Neill’s analysis of the Famine Irish is also grounded in the idea of a “Green Atlantic”—paralleling the Black Atlantic famously described by Paul Gilroy—and about which O’Neill has already co-edited a fine collection of essays.[iii] But at times the paralleling seems forced. As he describes it, “After Britain abolished slavery in its colonies in 1833, shipowners, crews and agents who had profited from the Middle Passage suffered financially” (33). They turned to transporting the Irish instead, with deadly results after 1847. But the dates—1833 and 1847—do not quite match up; Britain abolished slavery in the early 1830s, but it had already shut down the transatlantic slave trade in 1807, as had the United States a year later. Contra O’Neill, there was no smooth transition from Middle Passage to Coffin Ships. Having said that, the notion of a Green Atlantic is clearly a highly productive one for studying the political and social dynamics of the Irish Diaspora.

Later chapters continue in this vein, examining tensions between Irish women and male Chinese immigrants in San Francisco (perhaps the highlight of the book) and the complex politics of radical Irish labor agitators throughout California. Famine Irish ends with a discussion of James Connolly’s Green Atlantic peregrinations, highlighting that for all of Hughes’s and others’ assumptions about power, other ontological possibilities existed. There were always other ways to be Irish in the Green Atlantic. O’Neill has produced an incisive work, well researched and theoretically informed. This is a book that raises important questions about the nature of Irish migration to, and assimilation in, the American racial state.

[ii] John Hughes. The decline of Protestantism, and its cause a lecture delivered in St. Patrick's Cathedral on Sunday evening, November 10, 1850, for the benefit of the House of Protection, under the charge of the Sisters of Mercy (New York: E. Dunigan, 1850), 26.