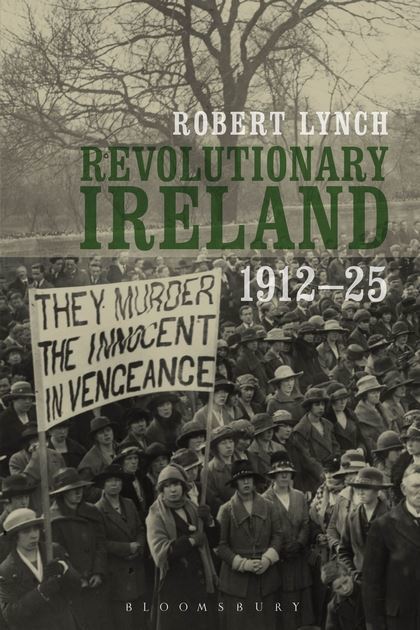 Amidst the recent surge in academic and popular outputs on Ireland’s “revolutionary” past, Lynch’s textbook stands out as a clear and balanced précis of an extraordinary period (c. 1912–25) of political change.

For school and university students—and indeed any interested general reader, Revolutionary Ireland has a number of key strengths. The first is its presentation of an engaging, primarily chronological account of the transfer of state power from Britain to (part of) Ireland, beginning with the Home Rule crisis of 1912 and ending not with the Civil War of 1922–23, as do many surveys of the Revolution, but rather the validation of Partition—of six UK-controlled Ulster counties from the independent Irish Free State—by the Boundary Commission, 1924–25. Lynch thus lays strong foundations to support readers’ understanding of the “most lasting legacy of the Irish Revolution”—“the two states which emerged in its aftermath” (131). The drawing of the border and establishment of Northern Ireland are Lynch’s particular research interests (and the subjects of Chapter 7), but he also highlights throughout the text “the issue of Ulster” (93) as central to the Revolution. This integrative narrative—of political developments in the north-east with “iconic” (31) events (such as the Easter Rising) in the south—is valuable for readers approaching, perhaps for the first time, a historiography traditionally dominated by strongly Unionist or nationalist perspectives.

Lynch’s all-Ireland history also places Irish revolutionary change in a wider perspective. Radical ideas and tactics, including “urban warfare” (38), came to Ireland from Europe and beyond; external events (the First World War and conscription crisis) had a profound impact on, for example, “The Rise of Sinn Fein, 1916–18” (Chapter 4). Indeed, Lynch captures very nicely the rather nebulous, almost accidental way in which separatism eclipsed home-rule nationalism and a “new political vision” (51) was translated into real constitutional change—via guerrilla violence, truce, and Treaty (Chapters 5 and 6). In my university teaching, of students largely from a UK background, I find particularly useful Lynch’s deployment of the British party political context to explain Irish developments; he argues that the “impetus for the Sinn Fein bandwagon” (53), for example, came from Lloyd George’s decision to release high-profile Irish political prisoners, which was followed by a much more “hard-line approach” (57) to republicanism.

Revolutionary Ireland thus observes both historical detail and the bigger, historiographical picture: it elucidates many of the ideological and other disputes that have beset the (public and academic) recording of the events of c. 1912–25. The validity of the term “revolution,” to describe this formative decade, is itself contested—as Lynch acknowledges on page one. Lynch does not overload the text with names of scholars and their works; he uses footnotes very sparsely, which is entirely appropriate for an introductory survey. Rather, he subtly recognizes shifts in historians’ treatment of, for example, Irish enlistment in the British Army during World War I (32–3) and the allegedly “sectarian” character of IRA campaigns in the south (74–5). However, given the “revolution” that the “study of this period has undergone” (2), there are nonetheless some omissions from Revolutionary Ireland as a primer for higher education-level readers particularly. Some of the footnotes and suggested Further Reading following each chapter point to research that is somewhat outdated. In “Initial reactions to the Rising,” for example, Lynch discusses internment as a radicalizing experience for many Irish nationalists. William Murphy has developed this argument in important ways, in Political Imprisonment and the Irish, 1912–21 (Oxford and New York: Oxford University Press, 2014), but is not cited here. Similarly Chapter 8, on the Civil War, while relevant and engaging especially in its discussion of the legacy of the conflict, directs readers for further information to a military history, by Carlton Younger, first published in 1968, and not, for example, to Gemma Clark, Everyday Violence in the Irish Civil War (Cambridge: Cambridge University Press, 2014).

Such examples are perhaps unfair: probably these recent publications were not yet available during the writing of Revolutionary Ireland. And Lynch elsewhere in the book engages with important work on violence and republicanism, by Peter Hart, Fearghal McGarry, Charles Townshend, and others, as well as highlighting some online repositories for primary material on these topics, including the invaluable Bureau of Military History Witness Statements. Nevertheless, Revolutionary Ireland could do a little more to assist its target audience in its scholarly endeavors. Undergraduates taking specific modules on the revolutionary period currently offered by universities in Ireland, the U.S., and the UK will certainly find this book to be a useful starting point, but perhaps, in future editions, Lynch might revise his suggested readings and cite newer collections and monographs such as Fergus Campbell, Land and Revolution: Nationalist Politics in the West of Ireland, 1891–1921 (Oxford: Oxford University Press, 2005); D.M. Leeson, The Black and Tans: British Police and Auxiliaries in the Irish War of Independence, 1920–1921 (Oxford: Oxford University Press, 2011); and David Fitzpatrick (ed.), Terror in Ireland 1916–23 (Dublin: The Lilliput Press, 2012).

A short (133-page) survey cannot, of course, address every aspect of the Revolution; neither can a printed book fully connect its audience with the wealth of source material (photographs, films, digitized letters, etc.) now available online for the study of Irish life during c. 1912–25. However, Lynch utilizes well the format available to him, for educational purposes. His pithy text is structured in clear, digestible sections; other helpful features for students and teachers alike are sample essay/exam questions and an appendix of key documents from the period. I consequently include Lynch’s even-handed textbook on my seminar reading list and recommend for others Revolutionary Ireland as a useful gateway to a fascinating, intensively researched, and still controversial decade or more in Irish history.