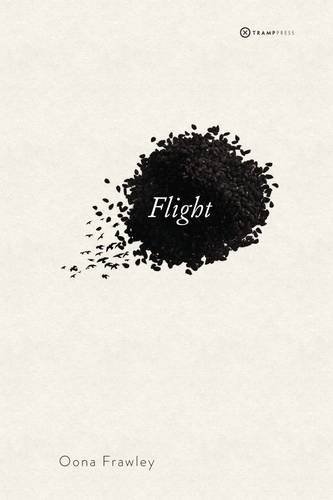 It’s a common lament: literary fiction is going the way of the airport novel. According to jeremiads on this theme, the problem isn’t so much that contemporary literary fiction is too fast-paced and too plot-driven; rather, the problem is that contemporary literary novels, like airport novels, feature jet-setting characters, are written by rootless international authors, and appeal to global travellers who pluck the book from a generic bookstores in Heathrow or LAX before discarding it in a generic hotel room in Dublin or Hong Kong. For these reasons, critics assume that literary novels are becoming rootless, without history, utterly exchangeable, and ultimately disposable.

The characters in Flight, Oona Frawley’s debut novel, certainly spend time in international terminals of airports and on flights connecting Dublin to Harare, New York to Hanoi. But in Flight, the characters’ international migrations and global networks do not divest them of roots or history, nor does its global optic make the novel exchangeable or disposable. Instead, Flight addresses global interconnections on a human level. Even more importantly, it uses the strangeness of these global connections, and the surreal feeling one gets when one wakes up in one place and goes to bed halfway around the world, to think about the strangeness of our most intimate relationships: with our parents and children, our partners, and even ourselves.

Flight explores the relationships and histories of four central characters in Dublin in 2004. Sandrine is a Zimbabwean woman who leaves her husband and young son at home and travels to Ireland to earn money and, she hopes, build a life for her family there. Upon arriving in Dublin, her passport and visa are taken from her when customs officers assume that since she is African, she must be entering the country illegally. She finds herself a temporary hostel run by Irish woman who, recognizing Sandrine’s education and ability to speak English (she was a teacher in Zimbabwe), recommends she seek work as an in-home carer for the elderly. Sandrine consequently finds herself in the home of Tom and Clare, a retired couple back in Ireland after a life spent abroad in New York, suburban Connecticut, and a hotel in post-war Hanoi where Tom traded spices. Both Tom and Clare suffer from dementia, a condition that, like international travel, highlights the strangeness of the characters’ relationships with each other and with their own pasts. Through Tom and Clare, Sandrine comes to know their daughter, Elizabeth. The novel dwells in the memories of all four characters, especially the three women. Sandrine and Elizabeth are drawn together over the course of the novel not only by the increasing reliance on each other but also by mirroring secrets: Sandrine left Zimbabwe pregnant, but hides the pregnancy not only from authorities and her employers but also her husband while Elizabeth mourns her own inability to become pregnant. Both women’s bodies become strange in the process: not only are they psychically and physically unsettled, their bodies also become politically charged, Elizabeth’s by the Republic of Ireland’s longstanding emphasis on “natural” forms of motherhood, Sandrine’s by the impending referendum to eliminate the automatic right to citizenship to children born in Ireland of non-national parents.

At times, questions of visas and citizenship rights, of overt and covert racism, feel too much like an attempt to educate readers on the experiences of migrants to Ireland. This is especially true early on in the novel when, for example, Sandrine reflects on being the only black woman on the flight to Ireland: “Until that moment, Sandrine had never been in such an overwhelming minority. Here she was, alone in her skin, feeling – for the first time – the gaze of those around her as it rested not on her but on the idea of her” (11). Here Sandrine’s insights feel stilted, too academic and instructive. Similarly, she sees Ireland as a fellow former colony that ought, therefore, to understand the political and economic injustices that linger after decolonization: “[Irish] racism surprised her, on the one hand, because for some reason she had naïvely thought that it wouldn’t exist in a country that had experienced such persecution itself” (157). While her awareness that her initial beliefs were naïve tempers the earlier instructive passages, the novels’ expressions of disappointment about Irish racism and imperialist complicity feel thin compared to the characters’ meditations on their personal relationships.

Flight is at is best when it uses the characters’ movements and migrations to illuminate the gaps, silences, and distances in relationships and to underscore that these are similar to but never align perfectly with physical proximity. Some of the most affective passages in Flight occur when Sandrine contemplates the letters she writes to her husband, George. She asks herself: “Who is this person in the letters? Is he the image she has created, something that has taken shape in her mind, a kind of interaction between her own way of thinking and these words on the page? Or had he created this image of himself in words? Was he responsible for this image, or was she? Sandrine turned the letters over in her hands, searching for something beyond the spacings, something else of him, something to make her remember […]” (120). But Sandrine admits that the unreality of her relationship with her husband is not simply the product of the miles that separate them. Indeed, she recognizes that it stems not only from distance but also from the realities of marriage; she reflects, “but the trouble was that she was in the final stages of a kind of chronic forgetfulness that began in over-familiarity and the preoccupations of parenthood, and was ending in absence” (120). She even asks herself if it was possible for to travel so far because, in seeking out emotional freedom at home, she “had already departed, in a small way, in her heart” (121). The novel does not seek here to diagnose a troubled marriage – indeed, this marriage endures and gives Sandrine great strength – but instead meditates on the spaces and gaps in relationships and on how we construct ourselves and each other out of words and images and memories.

Flight’s greatest strength is in finding thematic expression for the desire to be “relieve[d] of abstraction,” as one of the characters puts it, and the simultaneous need for those abstractions in order to make sense of our lives (122). Frawley uses intercontinental fights and memory loss, letter-writing and pregnancy, to illuminate how we come to know ourselves in relation to those we love the most. Frawley presents a vision of contemporary Ireland in all its social complexity that grows organically out of individual lives. If this is an airport novel masquerading as literary fiction, it is one that proves that international terminals and flights are not superficial. They are part of the fabric of contemporary relationships, and by engaging them, rather than by avoiding them, we can begin to understand the connections that we miss, and the connections that we make, in our travels and in our lives.