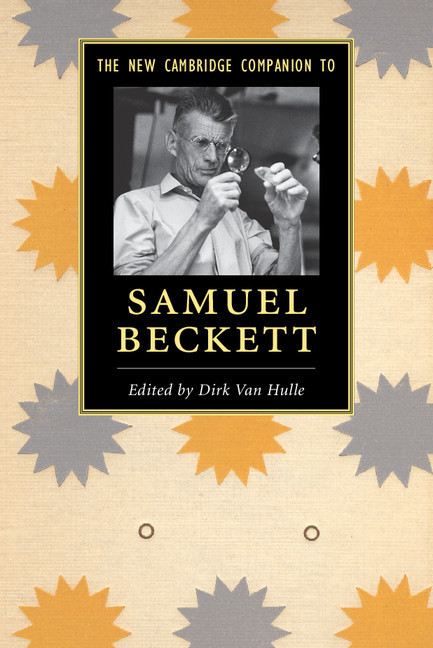 In his introduction to The New Cambridge Companion to Samuel Beckett, editor Dirk Van Hulle argues that Beckett scholarship today is animated by two fields of interest. On the one hand there is scholarship inspired by the work of contemporary philosophers (Van Hulle mentions Gilles Deleuze and Alain Badiou). On the other there is work inspired by what can be called the “archival turn,” which finds its ultimate origin in James Knowlson’s comprehensive, and unsurpassed, 1996 biography of Beckett. Van Hulle is careful to suggest that these two fields—call them the theoretical and the historicist—do not operate in opposition and that there is evidence of interaction and exchange between what may appear to be opposing critical camps. The New Cambridge Companion to Samuel Beckett is thus positioned primarily as a guide to the important work produced within these two fields; it is, secondarily, an attempt to show that the theoretical and historicist approaches to Beckett are not in fact in opposition and do produce fruitful and useful readings.

The New Cambridge Companion to Samuel Beckett is divided into three sections: “Canon,” “Poetics,” and “Topics.” In the first section we are presented with a diverse group of scholars working through the major works; thus John Pilling offers a reading of, among others, Dream of Fair to Middling Women, Murphy, and Watt; Angela Moorjani gives an account of the first prose trilogy; Peter Boxall traces the development of the prose from Texts for Nothing to Stirrings Still; Ronan McDonald situates Waiting for Godot in its historical-cultural contexts; Emilie Morin reads Endgame and other short plays alongside the idea of catastrophe; Mark Nixon provides a synoptic account of Beckett’s criticism and poetry. This first section quite perfectly illustrates the fact that there do appear to be two approaches to Beckett’s work, but that, contrary to what Van Hulle may wish to claim, perhaps only at certain times do these approaches meet. Moorjani’s reading of the first trilogy, for instance, is a useful archival compendium, not to historical sources for the trilogy, but to the various philosophical readings of the work; McDonald’s essay on Godot is not a reading of the play but a tracing of how various productions of it shaped a globalized consumption of Beckett; Nixon’s essay on the criticism and poetry is most effective here in terms of bridging the gap between historicist and, if not precisely theoretical, then usefully hermeneutic readings: mobilizing a wealth of archival material, Nixon unfolds a reading of the relation between Beckett’s criticism and his poetry to argue that, for Beckett, art was itself always already a form of criticism.

The second section, “Poetics,” sits most uneasily in The New Cambridge Companion. It is not precisely clear what is intended by the term “poetics” here and the four essays gathered, despite their individual strengths, do not seem to have much in common. Certainly Shane Weller`s attempt to periodize Beckett`s work is useful (Beckett becomes a late modernist, one whose work is created “in the shadow of a catastrophic history” [96]); Anthony Uhlmann’s reading of Beckett’s use of intertextuality (more specifically, Uhlmann’s essay is a reading of how other scholars mobilize archival details in their reading of Beckett) is an energetic response to the historicist turn; Sam Slote’s idea that Beckett’s self-translated work produces a kind of “linguistic atopia, neither French, nor English, nor Irish” (122) is a brilliant contribution; and Stanley Gontarski’s reading of the plays in relation to Antonin Artaud, and most usefully Deleuze, while keeping a steady eye on the historical context, may be the ideal conjoining of the historicist and theoretical perspectives. But I am uncertain what ultimately is being offered, by way of a general argument, about Beckett’s work here.

The third and final section of The New Cambridge Companion, entitled “Topics,” is, with the exception of the final essay, largely devoted to the relation between Beckett and philosophy. Peter Fifield is surely absolutely correct to write: “we ought to observe how often Beckett’s works read like extended philosophical examples or thought experiments” (151); Fifield may not to go as far as to suggest that Beckett’s work is philosophy or offers itself as a kind of extended philosophy (of failure, of compromise, of catastrophe, of melancholy), but his reading of Beckett as a reader of philosophy does suggest, very usefully, that Beckett`s work is, at the very least, philosophical. (And it is this fact, that the work is philosophical, that allows readers like Badiou or Simon Critchley or Deleuze to begin to figure Beckett`s work as a kind of literary philosophy). Jean-Michel Rabaté’s “Love and Lobsters: Beckett`s Meta-Ethics” successfully situates Beckett’s work within a complicated network of philosophical influence, from Immanuel Kant, Arnold Geulincx, the Marquis de Sade, Theodor Adorno, and even, however briefly, Martin Heidegger and Emmanuel Levinas. Rabaté wishes to suggest that there is an ethics at work here in Beckett, an ethics that must, somehow break free from traditional conceptions of ontology. Certainly Rabaté is correct to note the philosophical complications that arise when, as he will do in How It Is, Beckett mobilizes a concept like “justice”: surely the word carries with it an entirely metaphysical resonance that has no place in the ontologically and theologically depleted world of How It Is. Rabaté’s reading of Beckett suggests that we find in his work an ethics without morality and a subject without singularity: what Beckett offers, in this reading of his work, is an opportunity to imagine the subject as a multiplicity, a figure of potential “infinite otherness” (169) that escapes, if not transcends, traditional regimes of subjectivity and ethics. Ulrika Maude’s “Beckett, Body, and Mind” traces the formative influence of Henri Bergson’s Laughter: An Essay on the Meaning of the Comic (1899) on Beckett`s conception and subsequent literary representations of the body. Maude`s essay, more than a mere influence study, argues that the importance of Bergson—and, subsequently, the influence of other perhaps lesser known medical and psychological studies along with the crucial work of Samuel Johnson—is sustained and foundational. It was with (and against) Bergson and Johnson that Beckett measured his conception of the subject as mechanistic and subject to forces preceding and exceeding it; it was with and against these writers that Beckett was able to offer an image of the subject as subject to the economy of habit. And, as Maude crucially, if paradoxically, argues, “habit and mechanical behaviour constitute a tenuous, fraught and primitive ontology, the residues of an agential self`” (183).

The task of editing any collection of essays is daunting. Editing a collection of essays on Samuel Beckett—a writer constitutionally elusive—must be doubly so. And certainly we must understand that any attempt to provide a coherent sense of the contemporary condition of Beckett studies is, by definition, going to be a narrow, perhaps even restrictive. Dirk Van Hulle is correct therefore, if only strategically, to define Beckett studies today as articulated by its response to the historicist and theoretical approaches (the field is far more heterogeneous than this). The New Cambridge Companion to Beckett Studies, given its generous offerings of readings both archival and theoretical, thus succeeds within its own stated limits. But one wonders about readings of Beckett that fall outside the archival-theoretical opposition.