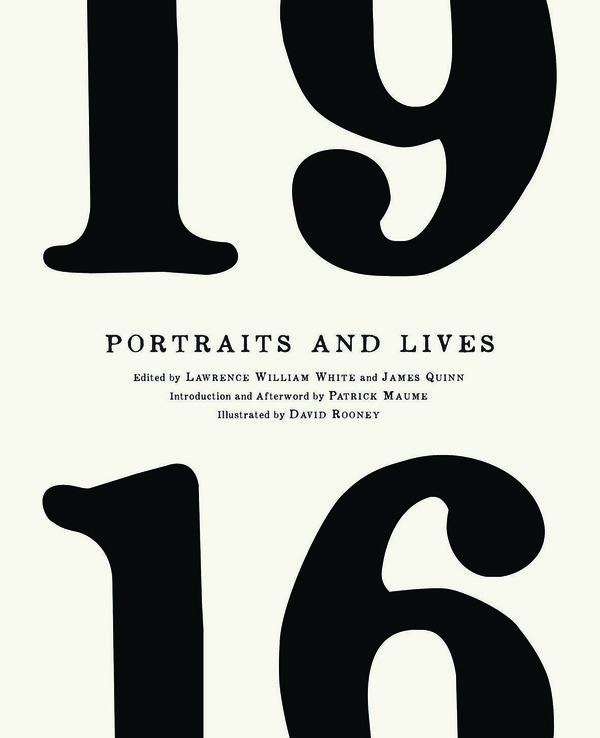 The Centenary of the Easter Rising drew a multitude of scholarly and popular publications, most adding to our knowledge of the intricacies of life in Ireland in 1916. Lawrence William White’s and James Quinn’s 1916 Portraits and Lives had perhaps the longest gestation as it is a selection of articles from the Royal Irish Academy’s Dictionary of Irish Biography (DIB), the Sisyphean project, which is updated online twice a year. Portraits and Lives includes biographical portraits of forty-two individuals whose careers were, in different ways, deeply involved with the 1916 Easter Rising. The editors have selected thirty men and women to represent Republican revolutionaries; three nationalist leaders who opposed the Rising; and one pacifist. Six lives have been chosen to represent the regime against which the insurgents rose, and two men have been selected for their contribution to the historiography of the Rising. The volume opens and closes with essays by Patrick Maume, and context is also supplied by a short chronology that begins in November 1907, when Tom Clarke returned to Ireland from America, and ends on May 24, 1923 with the ending of the Civil War.

Each biography in the volume is illustrated with a portrait by the artist David Rooney. He uses a scraperboard engraving technique in which black ink is scraped away to reveal a white chalk-board beneath. Rooney notes that through this process, figures “emerge from the black-ink darkness” (xvi). The written portraits, originating in the DIB, are uniform in structure and style. They are meticulously researched and relay verifiable information (rather than providing historical interpretation), as fits a dictionary or encyclopedia. The biographical format is somewhat rigid, and history told through the lives of significant men and women also has its limitations. Yet, in selecting forty-two lives out of the DIB’s collection of articles on hundreds of persons affected by the Rising, Portraits and Lives also takes the form of an anthology. Through the process of selection, a narrative emerges out of the black ink of individual lives, and it is here the richness of the volume resides.

Maume’s historical essays frame Portraits and Lives and are eloquent and incisive. He argues that “one advantage of the biographical approach is that—by tracking the subject throughout his or her life, rather than concentrating on the highpoints of the career—it gives a fuller sense of where attitudes came from” (12). This is almost certainly making a virtue out of necessity but it is nevertheless true that what emerges most vividly from the stories of these lives is the importance of intersectionality; individuals forming their political selves out of a variety of experiences and contexts. Maume sets out the broad ideological landscape of Edwardian Britain and Ireland, encompassing Irish unionism, British liberalism, Irish “Whiggery,” the Home Rule tradition, the separatist tradition, and “other influences” (trade unionism, the Cultural Revival and Catholicism).

These ideological strands reside unevenly in the biographies of many of those included in the volume and are as often fluid as constant. Patrick Pearse moved from Home Rule to revolution and Eoin MacNeill had a career that his biographers, Maume and Thomas Charles-Edwards, describe as “ambivalent and chequered,” “combin[ing] selfless dedication with weak execution and considerable capacity for self-deception” (185). Catholicism was deeply influential in the thinking of many rebels: Eamonn Ceannt traveled to Rome to celebrate the jubilee of Pope Pius X and during Easter week regularly led his men in the South Dublin Union in saying the rosary. Much more complicated was James Connolly’s relationship with Catholicism, as outlined in Fergus D’arcy’s biographical essay. Although no longer a practicing Catholic himself, Connolly argued (against the Marxist orthodoxy of the time) that holding certain religious beliefs was entirely consistent with being a socialist. The selection of lives in the volume is weighted toward radicals and so trades union involvement is woven into the activism of many lives including Winifred Carney, Seán Connolly, Helena Moloney, and Peadar Macken.

Despite the rather clinical rendering of biographies in Portraits and Lives, the detail allows for multifaceted aspects of the experiences and personalities of the men and women depicted to take shape. We find that Seán MacDiarmada was a tram car conductor until he was dismissed for smoking on a tram platform; Michael Mallin was a silk weaver who was also a member of an instrumental quartet known as the “Workers’ Orchestra”; James Connolly had worked, like his father, as a manure carrier; and Nellie Gifford served as a domestic economy instructor.

Portraits and Lives also allows us to glimpse the human beings behind the biographical information. The physicality of some of the main players is relayed: Con Colbert was “a small man...with a quiet-spoken, earnest energy” who inspired respect and enthusiasm (82); Seán Connolly’s “handsome looks, singing and acting talents, modest demeanor, and noble idealism touched with the fanatic” made a lasting impression on many (110); Edward Daly, with a frail constitution, was “a rather shy, though cheerful, clerk in Spaight’s timber yard” who stood as a prisoner in the teeming rain in front of the Rotunda on the Saturday night of the Rising, and he was identified the following morning and shot by firing squad four days later (111-114).

Homosexuality is hinted at in these portraits but only referred to explicitly where it can be evidenced. Madeleine ffrench-Mullen is described as Kathleen Lynn’s “confidante” (149) and Julia Grenan as the life-long friend of Elizabeth O’Farrell (218). Roger Casement’s sexuality has been much written of (not least by Roger Casement himself), and we learn in Bulmer Hobson’s portrait that he shared with Casement a love of the Glens of Antrim where they often hiked and camped. Hobson recalled these excursions as proof of Casement’s heterosexuality on the grounds that Casement had never taken advantage of this close proximity to make advances to him.

After the Rising, Tom Clarke told his wife Kathleen that he was glad he would be shot as his greatest dread was that he would be imprisoned again. Clarke had been convicted of treason and sentenced to penal servitude in 1883. The prison regime was extremely harsh and, James Quinn notes in his biographical sketch, several of Clarke’s fellow Fenian prisoners went insane. As in this example, mental health concerns make several appearances in the volume, including Helena Moloney’s drinking and depression in the years after the Rising and, most strikingly, the volatility of John Bowen-Colthurst who arbitrarily shot a young man outside Rathmines church during Easter week, and ordered the shooting of three other non-combatants: Francis Sheehy-Skeffington, Thomas Dickson, and Patrick McIntyre. Later that day, Bowen-Colthurst also shot Richard O’Carroll who was under the command of Thomas MacDonagh. White records that O’Carroll died in Portobello Military Hospital after nine days of great suffering. He left a wife and seven children, the youngest of whom was born two weeks after his death.

Indeed, a particular strength of Portraits and Lives is how it shows that by starting with the individual that it is possible to illustrate the ways in which these figures negotiated and structured their lives within systems, organizations, and associations. Maume uses Bowen-Colthurt’s biography to suggest something of the mental, political, and legal complexities enveloping some of the brutality of the Rising and, more generally, of the British empire. An article is included on Walter Edgeworth-Johnstone, Commissioner of the Dublin Metropolitan Police, as well as the Lord Lieutenant, Viscount Wimbourne, providing a sense of the mechanisms of power in Ireland. The biographies are ordered alphabetically beginning with the Chief Secretary, Augustine Birrell, and ending with the Republican and trade unionist Margaret Skinnider. This structuring adds to an awareness of inter-connectedness; many of these lives intersect and criss-cross, sometimes in tragic ways, during Easter week 1916.

As a result, the narrative that emerges in Portraits and Lives tells of a Rising that brought together disparate personalities and politics and cannot be accurately represented in a linear story of the fight for independence. The challenge to authority was multi-faceted and at times idiosyncratic. It was a time for the crank (as Francis Sheehy-Skeffington described himself)—“a small instrument that makes revolution” (307).

Portraits and Lives incorporates, of course, a different kind of scholarship to that in Roy Foster’s Vivid Faces: the Revolutionary Generation in Ireland or Fearghal McGarry’s The Rising: Easter 1916, and yet, in bringing together a wider range of characters, it adds to the depiction of the multi-vocal revolutionary generation. The volume was published before 2016 and it is to the credit of the editors that, in their selection, they anticipated many of the prominent themes of that anniversary, including the interest in women who were active during Easter week. The fact that Kathleen Clarke is the only woman mentioned in the afterward highlights how absent women can be from the traditional political narrative and how easy it is to be complicit in their ongoing marginalization. The volume includes Margaret Ó hÓgartaigh’s biography of Kathleen Lynn and stands as tribute and reminder of the long journey of scholars who have worked on women’s history.

This selection of biographical sketches will be of value to students and to members of the public interested in the Irish revolutionary period. However, its value is also as a commemorative volume, identifying the individuals and politics reflecting the current consensus on the Rising.