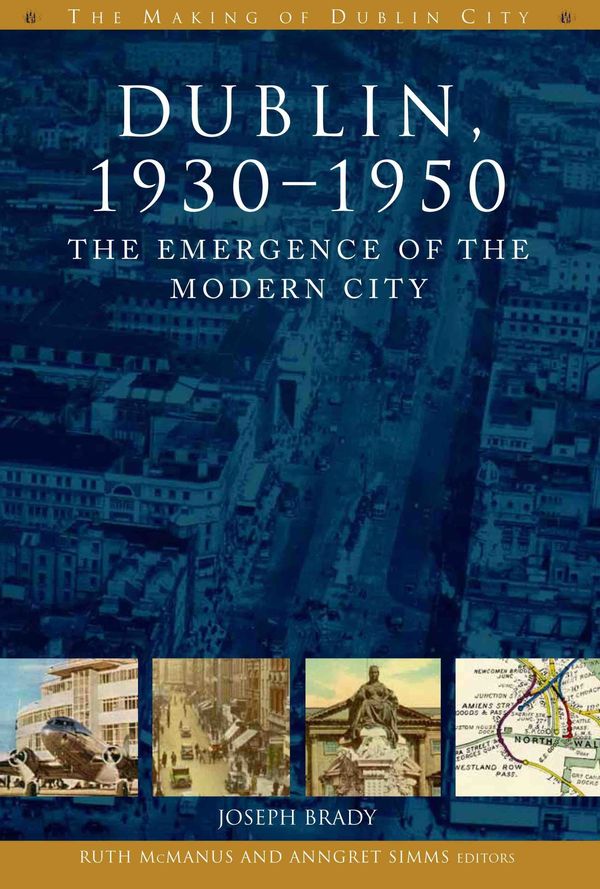 Like a blank box in the periodic table awaiting the discovery of its element, Joseph Brady’s Dublin, 1930-1950: The Emergence of the Modern City (hereafter, Emergence) fills a hole in the ongoing Four Courts series “The Making of Dublin.” This fifth volume in the historical geography sequence attempts to paint a portrait of the city at the moment that it begins to “assert its role as a capital” (10). These years of postcolonial consolidation and partition, 1930 to 1950, are at the heart of important debates in Irish Studies: how, for example, did independent Irish space differ from the previous colonial regime? Which indigenous groups inherited the state apparatus from the British, and how was their power consolidated and resisted? Which nationalist promises were upheld at the start of the new era? Which were altered, and which were abandoned? How did culture, including the production of space, reflect and critique political upheavals?

Joseph Brady’s, Dublin 1930-1950 makes a solid effort to cover these vital years, less from the perspective of grand ideology and nationalist politics and more from the standpoint of everyday life and common experience. In doing so, one not only gets a picture of aspects of Dublin life both grand (monuments and bridges) and small (where to take the family on a day out), but also a modestly-stated or performed theory of urban history. Brady’s account of these Dublin years veers toward the mundane and toward psychogeography: what did a Dubliner look for in a department store? Where did tourists walk and why? How much was the rent for a new home? The questions not addressed here are the politics of the major parties of the time. Also excluded in his account are sweeping ideological claims. For both better and worse, therefore, Brady’s book is a notable addition to the burgeoning historical, geographical, and academic literature of this period. He draws our attention admirably to the small details of urban life: the fashion shows in Dublin’s main shops, the speed at which traffic lights were set up. But in doing so, he sacrifices the larger context: the political and philosophical debates of the time, never bringing these important elements to the surface.

Dublin 1930-1950 has seven long chapters. There is also a short introduction in which the text’s central idea is stated: it was in these years that the “present-day social structure emerges” (13). Of course every historian claims that his or her period is the most important and shapes the present most decisively. The first main chapter, “A Profile of the City,” gives detailed readings of the 1926, 1936, and 1946 censuses. Many of the statistics from those surveys are neatly presented in appendices, too. The second chapter, “Managing a Growing City,” looks at the suggestions for assessing growth and managing development by each of the various local councils: Dun Laoghaire, Pembroke-Rathdown, and Dublin Corporation. Two lengthy middle chapters, “Suburban Growth and Development” and “Keeping the City Moving,” lay out less the why than the where of the city’s major housing trends. The final two chapters on “The Shopping Experience” and “Visiting and Enjoying the City” are the book’s best. The former delves, nostalgically for me, into the shops of Grafton Street and Henry Street, detailing their goods and services. I admire Brady’s efforts to bring daily, lived experience into conversation with the planners, the architects, and the politicians. He reads the various entrances to Brown Thomas on Grafton Street, discussing which commodities were to be found behind each door, each gate being a marker of class division. Many of Brady’s illustrations are original and fruitful, such as the line-up for the daily fashion shows in Clery’s and Switzer’s. Through these inclusions, Brady shows that he is best on the popular culture side of things.

What is somewhat disappointing about Emergence is that it lacks an overall narrative arc. Not every reader wishes to be part of a grand narrative or debate, I do realize, but it never becomes quite clear into which historical debates this book wishes to insert itself. The time period under consideration is often depicted as benighted and repressive, an example of all that modern, cosmopolitan Ireland has retreated from. I, along with others, have argued that the post-independent decades, those treated here, were far more complicated when examined closely.[1] In Emergence, however, the central theme, the story, never becomes fully apparent. If the argument is suggested by the book’s title—“the emergence of the modern city”—I came away neither knowing what precisely is modern about this period nor what exactly is emerging. Part of this lack of clarity comes from the books sentence structures themselves. There is agency in history, but the book relies too often on the passive voice. Phrases such as “It was widely recognized” (68) or “Restaurants were given permission” (431) are common, and I often had to revisit preceding pages to find the relevant subject of the verb. Dublin Corporation or Rathdown Council remain mostly anthropomorphic; their members, their political parties, and their inner tensions unnamed.

Over the course of the five hundred pages of this book, one issue kept arising: the lack of precision in defining or establishing the meaning of basic terms. Theory can certainly be overblown and redundant. A work of geography does not need to be a work of critical theory, but Dublin, 1930-1950: The Emergence of the Modern City presents itself as a work of critical geography. I wanted to understand this book on its own terms. But often, I found myself not knowing what was meant by its core vocabulary. I needed to fill in many of the gaps myself. For example, large sections of book rely on the concept of the “middle class,” whether it be “housing the middle class” (246) or exploring “middle class” shopping districts (301). I have my own sense of what these terms mean. I tend to define the middle class more by a set of values and beliefs than strictly income or property. Such an understanding, whether accurate or not, affords me a starting point. But the concept of class, who is in and who is out, how it emerges and how it protects itself, is an issue never openly addressed in this book.

In terms of the promised geographical perspective of the series, the spaces examined in Emergence are broad and diverse, ranging from urban planning to architecture, from shopping streets and parking places, to house sizes and tourist brochures. Such scope is ambitious and often pays off with fascinating facts and details: Dublin had so few hotel beds in the 1940s that all beds were booked out all the time at least three months in advance. Dublin had no traffic signals in 1931, though Belfast had sixteen. These are delightful nuggets and are charmingly presented. The broad selection of geographical material, however, can seem somewhat haphazard. Without a coherent thesis, interesting as much of the material is, one wonders why the author includes tourism but not sports, shopping but not theater, suburban growth but not the factory floor. Why focus on the intricacies of building the Pro Cathedral but not national schools or public libraries? With a more focused and theoretical statement of purpose, this book would offer a more urgent sense of what historical geography has to offer the contemporary reader. Indeed, with one more level of theoretical polish this book could be stellar, helping to shed light on how to study urban space and why one ought to.

Four Courts Press prides itself on producing high quality texts. Whether they are image-heavy works, such as The Mansion House (2015) or Bridges of Dublin (2015), or more heavily text-based academic monographs, such as The Otherworld Voyage (2014), the photographs, the meticulous footnotes, and the attention to the Irish language all catch the eye. The publishing house has become an important custodian of national and regional research. Unfortunately, many of the images in Emergence are not up to par—this, despite the series’ preface, which states that what “unites all books in the series is … lavish illustrations.” On page 409, a reproduced image of a tourist walking-trail is illegible. A reader cannot make out names of streets or landmarks. A potentially interesting image on page 277 of a real estate agent’s brochure for a suburban home required a magnifying glass in order to read the descriptive captions. While many images do remain crisp and are quite engaging, many are blurry.

As I mentioned earlier, Dublin, 1930-1950, is the fifth book in the Four Courts history of Dublin. Ruth McManus’s Dublin 1910-1940: Shaping the City and Suburbs appeared in 2002. Niamh Moore’s Dublin Docklands Reinvented (2008) covers the 1990s. The first book in the series, Dublin Through Space and Time (2001), edited by Brady, contains chapters by Jacinta Prunty on nineteenth century public health. It also contains two chapters by Brady himself: one on commercial life in Dublin around 1900; and the other on civic improvement and tourism in the city in 1915. Those other books in the series appeared over a decade ago, along with many others that detail Dublin’s history and geography in the immediate postcolonial period. Much of the information in Emergence, unfortunately, has already been covered, debated, and examined from multiple angles. The material in chapter six, “Suburban Growth and Development” is covered by Ruth McManus in her book, Shaping the City and Suburbs, a fact that Brady acknowledges. Michael Bannon’s The Emergence of Irish Planning (1989) lays out much of the planning history of the city. My own book, Postcolonial Dublin (2006), attempts to place these somewhat empirical accounts of Dublin’s evolution into theoretical debates about the meaning of nationalism, the writing of history, and the structure of postcolonial identity. Murray Fraser’s John Bull’s Other Homes (1996) lays down a good deal of the architectural history of this period. I could mention many other literary and cultural accounts of Dublin that were published over the last ten years. Had Emergence been more explicit about what it is aiming to contribute to the vital debates about this period in Irish history—debates over cultural and political hegemony or over the meanings of cosmopolitanism and nationalism, for example—it might raise its head above the already crowded field of books documenting this turbulent time.

Dublin, 1930-1950: The Emergence of the Modern City contains much engaging information. The readings of the relevant censuses stand out. Brady breaks down the data into clear, easy to read ward-by-ward charts. One learns about the average rent, the average number of people per house, and the average house size in each part of the city. I most enjoyed the reading of early tourist brochures during a supposedly isolationist period. In our contemporary period, when tourism is Ireland’s biggest industry, these early brochures and walking guides exist on the cusp of an explosive moment. Aer Lingus carried 9,000 passengers in 1938. A hotel room at the Shelbourne cost a shilling. A lengthy day trip by car was around Howth head. With these insights in mind, however, Emergence has lengthy chapters, a couple of which weigh in at over a hundred pages. This was often disorienting, despite the enjoyable information presented. Chapter seven, “The Shopping Experience,” included eighteen subsections. Some subsections have subdivisions within them, rendering them, at times, quite difficult to navigate.

Nonetheless, I recommend the text for all those who seek a background in this period of Irish history. The literary scholar will benefit from reading about disparate cultural aspects of daily life. The geographer will learn about housing patterns and planning developments. What a reader will not get is a flavor for the cultural and social debates over which scholars of this time period argue. The Emergence of the Modern City is a book for the specialist, for the academic, and for the native, who must do much of the work for him or herself in providing the relevant conclusions and consequences of the material presented. In its flight from theory and politics, Emergence has sought to be objective and to present just the facts, but in doing so it remains somewhat removed from intellectual tension and human drama.