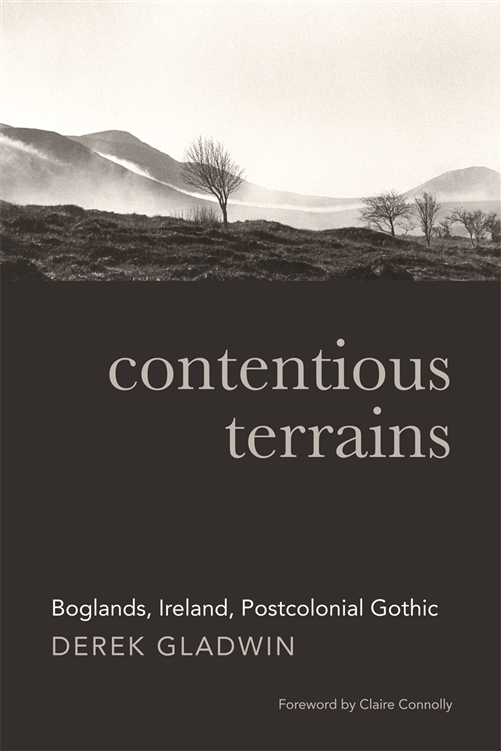 When I was a child growing up in Donegal, a phrase that was commonly used to sum up someone’s stubbornness, rudeness, or more often stupidity was, “You can take the man out of the bog but you cannot take the bog out of the man.”  The study of the nature of the bogs of Ireland is therefore interwoven with the story of human presence and human perception of that nature in Ireland. The bogs are a kind of palimpsest, superimposed forms and places that testify to the complex interaction of nature and human culture. In 1685, William King—later to become Archbishop of Dublin—published “Of the Bogs and Loughs of Ireland” in Philosophical Transactions, in which he calls Irish bogs “infamous” and equates extensive bogland with barbarity. The bogs offered an advantage to resistant natives, who, King believed, deliberately built near them: the bogs “are a shelter and a refuge to tories [dispossessed natives turned outlaws], and thieves, who can hardly live without them.” For Elizabethan colonists, the prospect (or actual view) of bogland from the English Pale was, as it were, the ground-level reality of Irish nature, very different from the colonial prospect (or anticipated view) of Ireland from England. Gerard Boate’s Ireland’s Natural History (1652) writes of the reason for the extent of our bogs: “now wonder if a country, famous for laziness as Ireland is, abound with them.” There is indeed a long history of colonial writing on the nature and culture of bogs. There have also been some iconic books on the nature of our bogs with the likes of David Bellamy’s The Wild Boglands (1986) to the monumental study by John Feehan et al. in The Bogs of Ireland (1996). But a book that provides a political and geographical history of how boglands are represented in modern and contemporary Irish literature and culture (1880s to present) has been sadly lacking, even though the bog has long been reclaimed from seventeenth century colonial writing. Derek Gladwin’s Contentious Terrains: Boglands, Ireland Postcolonial Gothic (Cork: Cork University Press, 2016) ensures that this in no longer the case.

The bog has been a subtle theme in modern Irish history, extending to political and cultural issues as well as permeating social and economic ones. Gladwin’s scholarship has uncovered a picture richer in detail and more complex in its development than traditional images of the bog question in Ireland would suggest. It is both timely, given the current political and environmental debates, and it is original in its exploration of how colonization and its legacy overlap through the Gothic form. It is, in the nature of all serious landscape writing, truly cross-disciplinary and totally interconnected, exploring the whole gambit of Irish writers in the genres of fiction, drama, poetry and non-fiction.

Drawing on a rich range of writers such as Bram Stoker, Frank O’ Connor, Sean O’Faolain, Daniel Corkey, Seamus Heaney, Marina Carr, Deirdre Kinahan, Patrick McCabe, and Tim Robinson, he takes us through a literary geo-history from the Land Wars of the 1880s and the War of Independence (1919-1921) to the “Troubles” (1960s and 1970s) and Celtic Tiger years (1990s and 2000s), ending with today’s pressing environmental crisis. He positions all these within ecocritical, postcolonial ecocriticism and Gothic studies while never losing sight of the currency of the of the place of the bog in post Celtic-Tiger Ireland. Gladwin could have easily begun his study of the bog on Irish colonial literature and culture with the work of Spenser, King, or Boate in the late-sixteenth or early-seventeenth century; rather, he begins his reviews in the late-nineteenth century, as a major transitional period in Irish history where the perceptions of bogs began to be viewed as symbols of national identity, culture, and, laterally, as spaces of great ecological diversity and worth. The other major dimension apart from colonialism is the Gothic and this too appears at historical and social transitional periods.

Chapter 1, “The Protean Nature of Bogs”, begins with the most elemental and imaginative qualities of the bog in a wonderful brief literary and cultural history.  As commented upon by Terry Eagleton: "With a bog, and its buried contents, the past is no longer behind you, but palpably beneath your feet. A secret history is stacked just a few feet below the modern world in which you are standing."[1] (50)1.

In the second chapter, “Environments of Empire”, Gladwin explores chiefly Bram Stoker's The Snake's Pass (1890) and the various attempts of the Anglo-Irish landowners to exploit a bog in the west of Ireland. Gladwin addresses not just the effects of colonization but also "as a warning by subtly questioning the problems associated with exploiting and then developing the boglands for profit rather than subsistence" (76). This theme is returned to later in the book in studying the writings of Tim Robinson. In a sense, they  look at “colonisation without colonies” and the colonial mindset that still pervades much of modern Ireland.

Chapter 3, “Spectral Histories of Nationalism,” explores through the works of O'Connor, O'Faolain, Corkey, and to some extent Heaney, the use of the bog as a haunting setting to address some of the uncertain and ambiguous histories of social violence during the War of Independence and the recent Troubles. Hauntology, as a relatively new aspect of academic research, is well served by this chapter.

The fourth chapter, “Mapping Gothic Bog Bodies,” belongs to Seamus Heaney and his use of bog bodies to symbolically and physically function as literary maps in his prose and poems between 1966 and 1978. As Gladwin says, “Mapping is also a form of exploration and exploitation. Through mapping as in writing, we can question, consider, and explore possibilities” (166). And yet “Bog poems are politically, structurally and socially unstable because they reflect the qualities of the bog” (167).

Chapter 5, “Gendered Boglands” explores how Irish women in Marina Carr’s By the Bog of Cats (1998) and Deirdre Kinahan’s Bog Boy (2010), just before and after the Celtic Tiger years, embraced the bog as a space of both liberation and struggle against not just the neo-colonial ethos of the era but the associated patriarchy.

Chapter 6, “Bog Gothic, Bog Noir, and Eco-bog writing” is, if anything, too rich and rather crowded, divided into three sections, “Bog Gothic,” “Bog Noir,” and “Eco-Bog Writing.” It is testimony to the depth of the subject that these could have been three separate chapters. In the first section, Gladwin seeks to begin a new discussion that, as some critics have sought, labels Patrick McCabe’s The Butcher Boy as “Bog Gothic” (213). Gladwin argues that his form creates a “bog effect,” conjuring metaphors of a regressive and supernatural rural Ireland that “align with long-lasting stereotypes of boglands” (213). “You can take the man out of the bog but you cannot take the bog out of the man.” He then begins a brief exploration of the bog as a popular motif and scene in Irish crime writing. Any follower of the recent political and violent history of Ireland will realize how this is not just tied to fiction. The final section on Eco-Bog Writing departs somewhat in that it examines the non-fiction topographic or landscape writings of Tim Robinson (Gladwin had a busy 2016 in that he co-edited with Christine Cusick Unfolding Irish Landscapes: Tim Robinson, Culture and Environment) and how they address the environmental threats to the bogs of Ireland” (230)” If a “bog is its own diary as he claims, then writers must read the pages of it, like a literary history of lives forgotten or misremembered, before it completely vanishes” (236).

Boglands invite a whole academy of sciences to their study, but the cultural element is often neglected. You cannot have one without the other. If we add the threatened ecology of bogs to the resources of literature, archaeology, and other elements of culture the possibilities  are limitless for their survival. The arts and sciences do not meet often enough. There are few other substances that can join the built, natural, and cultural elements of our heritage as much as our bogs. Joseph Beuys, one of the world’s most influential post-war avant-garde artists described our bogs as, “the liveliest elements in the European landscape, not just from the point of view of flora, fauna, birds and animals, but as storing pieces of life, mystery and chemical change, preservers of ancient history.” Gladwin’s book has helped show how these contentious terrains can throw a light on the past and help us look to the future. The short conclusion to the book is called Uncertain Futures—enough said.