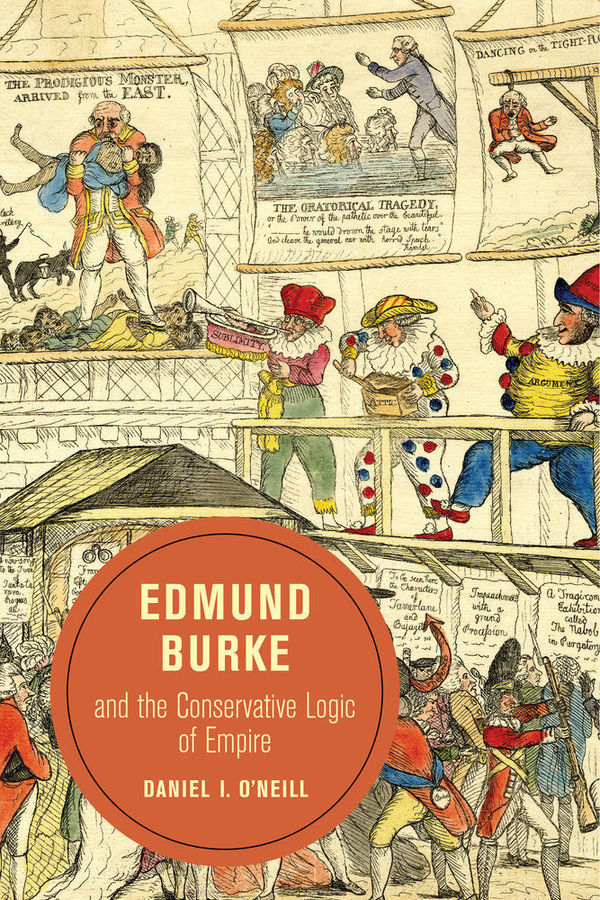 Edmund Burke remains something of an enigmatic figure; he was an Irishman but strongly pro-British, he was a Whig but his views of the French Revolution put him at stark odds with his own party, and his philosophy was strongly influenced by the Scottish Enlightenment yet he came to be seen as the father of modern conservatism. In recent years, scholars such as J. G. A. Pocock have mostly dismissed this latter idea of Burke-as-conservative, seeing him instead as a liberal and even an early critic of British imperialism. In Edmund Burke and the Conservative Logic of Empire, Daniel O’Neill’s intellectual investigation-cum-polemic cuts through much of this revisionist slant on Burke, staunchly arguing that he was indeed a conservative as well as a partisan supporter of the British Empire, one whose writings laid the groundwork for intellectual defences of the Empire in the nineteenth and twentieth centuries (1).

O’Neill draws on two of the most popular conceptual models for studying imperialism: David Cannadine’s Ornamentalism (which proffers the idea that imperial metropoles seek to unite their colonial holdings with a shared sense of common culture) and Edward Said’s Orientalism (which argues that imperialism requires an “othering” of the subaltern peoples of the empire) (2). As O’Neill shows, these two processes are mutually constitutive; the sense of imperial self is constructed in opposition to visions of supposedly inferior outsiders. More than that, Burke’s writings on America, India, and Ireland, according to O’Neill, by pioneering this Ornamentalist-Orientalist framework, foreshadow the ideology of British imperialism in the Victorian period and after.

O’Neill begins with a summation of Burke’s philosophy as well as a discussion of its place in the larger context of British imperial conservatism. Burke, he rightly points out, was consistently hostile to notions of political equality or democracy. This was the root of his famous contempt for the “absurd ideas” of the French Revolution (6). In opposition to such “dangerous” notions, Burke proffered a vision of rigidly-defined social hierarchies (albeit with enough meritocratic social mobility that the right kinds of people could move up, as he himself had done). This conception of a hierarchical social order easily meshed with an equally hierarchical imperial vision of the world that placed Britain at the top and saw Ireland, India, and the American colonies as necessarily subordinate (13-14). And O’Neill argues that the policies for which Burke advocated (easing of taxation in colonial America, ending of the Penal Laws in Ireland, protection of Indian land-ownership) were actually about maintaining the Empire by implementing his conservative social order in each place. In all three cases, Burke identified populations that he believed bore an essential resemblance to the English (Ornamentalism) or he railed against dangerous “others” (Orientalism) that would threaten the Empire. O’Neill’s analysis here is quite accurate and fair-minded.

Nonetheless, it is unclear what makes these positions specifically conservative? Many nineteenth-century liberals were agreeable to hierarchical visions of both British society and of a British-centric world. On Liberty, the 1859 work of that paragon of Victorian liberalism, John Stuart Mill, gave a fair amount of attention to “barbarians” and the assertion that they were not yet ready for democracy; an interesting observation for a one-time clerk of the East India Company to make. Historians like Catherine Hall, Thomas Holt, and Andrew Sartori have done much to show that the liberalism of high-imperial British liberals was often not that liberal. And it is worth asking if conservatism has a similar inner tension. Indeed, the borders between liberalism and conservatism can be remarkably fuzzy, particularly in the decades after the French Revolution. The assessment of the conservative writer Yuval Levin—that Burke represented a “conservative liberalism”[1]—thus seems closer to the mark, one that has a more satisfying grounding in the contemporary realities of post-1789 politics.

O’Neill is not necessarily wrong in calling Burke an “intellectually coherent” (169) thinker. But in seeking to disprove the idea that Burke was a liberal or an anti-imperialist, in seeking to present him as “a consistently conservative political thinker” (1), he brushes aside much of the nuances and fissures in Burke’s writings. The resulting image, of a singularly pro-imperial conservative, is useful for his polemic with Pocock et al but is not always fully accurate. The three subsequent chapters—concentrating in turn on Burke’s attitudes toward America, India, and Ireland—continues the presentation of Burke as a consistently conservative thinker who strategically utilised an Ornamentalist-Orientalist conception of the Empire in his writings and political interventions. And the same problem—that Burke was singularly and coherently conservative—recurs.

The American revolutionaries, Burke said, were the “descendants of Englishmen” (51) and should be governed as such. Burke saw the colonies “in largely Ornamentalist terms that stressed the colonies’ civilizational similarity to Britain and, therefore… advocate[d] a policy of conciliation based on the cultivation of mutual empathetic fellow-feeling” (52). Conversely, he was aghast at any suggestion that the British should betray their “English” compatriots in Boston or Philadelphia for an alliance with Native Americans, who he saw as “uncivilized and savage Others” (66).

In India, where many later British imperialists similarly saw Indians as a racially inferior people and thus destined to be ruled by the supposedly superior British Empire, O’Neill argues that Burke “assimilated India to Britain” (94). Burke believed that India had an established ruling class whose authority was grounded in a proper respect for the sanctity of private property (103). He even saw Hinduism and Islam as playing the same role in maintaining social order throughout the subcontinent as he believed Christianity did in Britain (98). All of these cultural features, O’Neill contends, amount to an “Ornamentalist Rejection of Oriental Despotism” in Burke’s writings. Upending the conventional racial-imperial logic, Burke Ornamentalised those in the East (the residents of India) but Orientalised those in the West (the Native Americans). According to O’Neill, though, Burke’s rationale was to strengthen the Empire.

Similar to India and America, Burke’s support for the abolition of the Penal Laws in Ireland has prompted claims that he was some kind of proto-nationalist or even an opponent of British imperialism in his home country. O’Neill has little time for such claims. Instead, he argues that Burke believed that Ireland should remain subservient to Britain in the imperial hierarchy (124). According to O’Neill, Burke supported a limited Catholic emancipation from the Penal Laws, in the hope that it would promote a home-grown aristocracy more suited to rule over Ireland than the Protestant Ascendancy (144-146). Such Ornamentalist reforms would make Ireland more like England, thus strengthening the imperial bonds. As with his discussions of India or the Americas, O’Neill’s observations are sharp and pointed.

Yet there are certain cracks in Burke’s ideas that O’Neill does not address. For sure, Burke saw the likes of Benjamin Franklin or Thomas Jefferson as being essentially English in culture and mores. In his famous 1776 “Speech on Conciliation with the Colonies,” he spoke of the Americans in racialized terms as “Two Millions of inhabitants of our own European blood and colour.” Yet in the same speech, he addressed one danger of not reconciling. American colonists, he stated, had moved so far into the continental interior as to be almost out of reach of English law. A coercive response would only push them further away. Where the English of North America had thus far respected the laws of private property (“We have invited the husbandman, to look to authority for his title. We have taught him piously to believe in the mysterious virtue of wax and parchment.”), if they crossed to the far side of Appalachia they would be lost: “Already they have topped the Apalachian [sic] mountains. From thence they behold before them an immense plain, one vast, rich, level meadow; a square of five hundred miles. Over this they would wander, without a possibility of restraint; they would change their manners with the habits of their life; would soon forget a government, by which they were disowned.” They would, Burke said, “become Hordes of English Tartars.”[2]

For Burke, property-owning English civilization was surprisingly fragile. The Ornamentalist sense of shared sympathy identified by O’Neill was similarly delicate. Moreover, as the language used here shows (“Hordes of English Tartars”), Burke was not as idiosyncratic in his use of Orientalist othering as O’Neill seems to suggest. Indeed, in his Reflections on the Revolution in France Burke drew on a number of Orientalist claims about Eastern despotism (cf. his talk of “the barbarous anarchic despotism of Turkey, where the finest countries in the most genial climates in the world are wasted by peace more than any countries have been worried by war”[3]). O’Neill’s observations about the full meaning of Burke’s support for Penal Law abolition and his desire for an Ornamentalist Irish social order are well made. But then again, Burke did once claim, in a letter to an Irish friend, that “the whole People of Ireland….their notions and their inclinations have always been a riddle to me.”[4] His Irish compatriots were not always as familiar to Burke as O’Neill suggests, and Burke himself remains an elusive and not always coherent liberal conservative.

[2] The Speech of Edmund Burke, Esq., on Moving his Resolutions for Conciliation with the Colonies, March 22, 1775 (third edition, 1775), in A Philosophical Enquiry into the Sublime and the Beautiful and Other Pre-Revolutionary Writings, ed. David Wormsley (London: Penguin Books, 2004) 343, 359.

[3] Edmund Burke, Reflections on the Revolution in France and on the Proceedings in Certain Societies Relative to that Event (London: Penguin, 1986) 231.