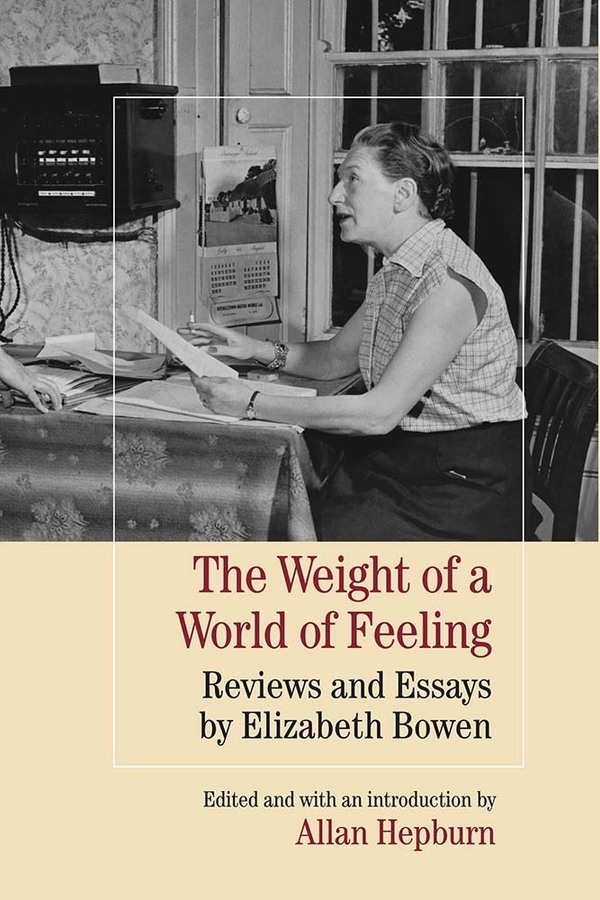 The Weight of a World of Feeling: Reviews and Essays by Elizabeth Bowen. Edited by Allan Hepburn. Evanston, Illinois: Northwestern University Press, 2017. 418 pp.

After editing collections of Elizabeth Bowen’s essays (2008), unpublished short fiction (2008), and radio broadcasts and interviews (2010), Allan Hepburn has presented us with another welcome gift: a collection of Bowen’s reviews. Both an inexhaustible source of information and a highly enjoyable book, The Weight of a World of Feeling is a must-read for Bowen scholars and for anyone interested in the literary world of the mid-twentieth century.

As Hepburn explains in his informative introduction, Bowen only began reviewing books in 1935, when she had already published four short story collections and four novels. After that, she regularly contributed reviews to The New Statesman, but also received commissions from The Bell, The Observer, The Spectator, The New York Times Book Review, and several other publications. From 1940 to 1950 and from 1954 to 1958, Bowen also wrote a weekly book column for The Tatler. These reviews were an important source of income for Bowen, who was often struggling financially in spite of her success as a writer. Drawing on letters by Bowen and other writers, Hepburn shows how reviewing formed an important part of mid-twentieth century literary culture. Authors reviewed each other’s work and expected generous reviews in return. Even though Bowen may occasionally have been guilty of partisanship in her praise of the work of friends, she was never harsh or dismissive in her reviews. Reservations were typically expressed with a dose of irony or came in the form of recommendations for a writer’s future work. About Norman Mailer’s debut, for instance, Bowen writes, “I cannot regret my survival (for it was a case of that) of an entire reading of The Naked and the Dead: ultimately something was added to my experience. What is likely to be this novel’s future in this country, I cannot say” (240). At other times, she commends the book for a specific group of readers, which does not, one gathers, include the author herself.

Any reader of The Weight of a World of Feeling cannot but stand in awe of the amount of archival research that must have gone into producing this fascinating book. Hepburn compiled a list of Bowen’s reviews on the basis of existing bibliographies and stray references in Bowen’s letters. He then tracked down these reviews in various periodical archives and libraries. Traces of this hard work can only be found in the endnotes, however. The reviews themselves are elegantly presented into different chapters, with smaller interchapters providing diversions in the form of previously uncollected essays, biographical pieces, interviews and prefaces. These are grouped thematically as “Techniques of the Novel,” “Books and Occasions,” and “Autobiographies.” The main sections of the book contain all the reviews which Bowen published between 1935 and 1942, and between 1948 and 1972, with the exception of those that had already been reprinted in Collected Impressions and Afterthought. Of Bowen’s weekly Tatler columns, on the other hand, Hepburn was only able to include a selection, favoring “literature over history, and fiction over critical over biographical works” (xxix). Some of the reviews he omitted are nevertheless tantalizingly described in the introduction, such as Bowen’s review of Saki’s complete short stories, which I, for one, would have liked to read.

While these editorial selections were no doubt necessary in the interests of length and readability, they are a cause for regret. After all, this is a book readers will turn to for many different reasons, some of which the editor may not have anticipated. As Hepburn does note, The Weight of a World of Feeling offers, first of all, a fascinating “reader’s diary” (xv). And Bowen’s literary tastes were both extensive and erudite. She enjoyed detectives and mysteries, but also loved re-reading classic texts in new editions. She read fiction as well as memoirs, travelogues, and literary criticism. She wrote about British, Irish, and American writers, but also reviewed books in translation by Colette, Simone de Beauvoir, Francoise Sagan, and Luigi Pirandello. As a result, this collection offers a highly interesting cross-section of the literary marketplace of the middle of the twentieth century. One gets a sense of books and authors that were popular at the time, though they may no longer be so now. Conversely, some now established authors were treated with caution when they made their first appearance on the literary scene. About Angus Wilson’s debut, for instance, Bowen writes “The Wrong Set, though not a success, makes one feel that there is talent—misused.” (239).  Because Bowen frequently reviewed three or four books in a single piece, one is often struck by unexpected juxtapositions, which serve as a reminder that, indeed, Finnegan’s Wake was published within a few weeks of At-Swim-to-Birds or that the first months of the war saw the publication of John Steinbeck’s Grapes of Wrath, Frank O’Connor’s Dutch Interior and Graham Greene’s The Power and the Glory. The reviews Bowen wrote during the war are also poignant reminders of the anxieties and uncertainties of these years.

Bowen scholars will perhaps primarily turn to this book for clues about her own writing. Interesting in this respect are Bowen’s retrospective reflections on her novels and short stories. In “My Best Novel” (1950), she notes that The Heat of the Day is the novel she esteems most, but The Last September is the one she is “most fond of” (265). And in a 1947 interview for the New York Times Book Review, she claims to have been “most nearly completely satisfied by some of my longer short stories, such as ‘Summer night,’ ‘The Disinherited,’ ‘The Happy Autumn Fields,’ while announcing that that she also is embarking upon “[F]our long short stories, each representing a season of the year” (263). Sadly, these never materialized. The reviews can also be mined for Bowen’s aesthetic ideas and preferences. In the introduction, Hepburn already does so for her thoughts about the novel. Bowen, he argues, “prefers action to characters, or action to ideas” (xxiv). She dislikes novels that place style above story and has little patience with “the twistings and turning, the blurs, the fogs, the halts, the tedious mystifications and ill-concealed uncertainties that impair the narrative interest of so much modern fiction” (346).

Given my own interest in the short story, I was pleased to find that short story collections frequently featured in her reviews. Bowen often expresses her love for the form, shares her thoughts about the state of the modern short story, and tries to set the genre apart from the novel. Aware of the prejudices against the short story among fiction readers, she explicitly recommends the form to her readers and advises them not to

bolt the whole collection in one sitting. Short stories that are worth reading at all should be read not more than two or three at a time. Ideally, they should be allowed to “dissolve on the palate” one by one. For this reason: they are immensely compressed; they are designed to have a delay-action effect on your imagination. Give each story a chance to work in its own way. If possible, get up and walk round the garden between each. In this way, you will find that your weekend book of short stories does last you the whole of the weekend. And not only this, you will find that it will amuse you even while you are not actually reading. (135)

Bowen’s interest in all things Irish comes across in her reviews as well. She offers interesting analyses of the work of contemporaries such as O’Connor, Seán Ó Faoláin, Sean O’Casey and Mary Lavin, but also discusses sociological works, travel books, and memoirs about Ireland. Critical studies of Irish authors, like Sheridan Le Fanu, James Joyce, Jonathan Swift, and Charles Lever, offer her an opportunity to formulate her own thoughts about these writers. In an interesting review of a biography of Somerville and Ross, for instance, Bowen marvels at the superb achievements of these “interlocking creative imaginations”: “this was a literary miracle, plus something other. Result, a superb degree of accomplishment, a tremendous range” (379).

A final aspect that stands out for me in this collection is Bowen’s sustained attention to the work of women writers. At a time when women reviewers, editors, and publishers were a small minority in the publishing world and women writers struggled to get attention, Bowen’s affirmative reviews of the work of fellow women writers must have been very welcome indeed. Among her special favorites are Elizabeth Taylor, Ivy Compton-Burnett, and Rose Macaulay, but she also writes with admiration about the work of Katherine Anne Porter, Eudora Welty, and Vera Brittain. For one of Rebecca West’s novels, she reserves a more ambivalent kind of praise: “[t]he book as a book appears to me to have almost no imperfections; it rounds itself off, it is impossible to think beyond it. (I do not know whether this is a criticism or not.)” (52).

As these brief extracts already suggest, The Weight of a World of Feeling is not just a treasure trove of information about Bowen’s work, her aesthetics, and twentieth-century literary life in general. It is also a truly enjoyable book which delights the reader on every page with Bowen’s sharp insights, witty phrases, and elegant erudition.