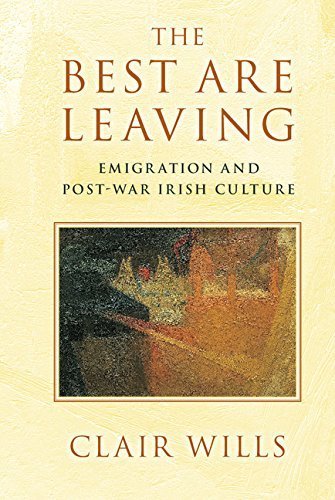 Between the foundation of the Irish Free State in 1922 and the year 1982, one in every two persons born in Ireland left the country. By doing so, many (though by no means all) ensured a batter material life for themselves and for those who remained. In Brian Friel’s Dancing at Lughnasa, there are only three eggs available for five sisters at the mid-point of the play; by the end, two sisters have gone to England, where they live out lives of poverty, but now there is one egg each for the three who remain. If all who left had stayed on, Ireland by the 1980s might indeed have looked even more like the Third World country which many claimed it to be—and Britain would have been deprived of many valuable bricklayers, nurses, and teachers.

In The Best Are Leaving: Emigration and Post-War Irish Culture, Clair Wills produces a deft and panoptic sequel to her fine book on the culture of 1940s Ireland, That Neutral Island. She looks closely at many novels, plays, poems, and paintings of the post-war period into the 1960s, choosing to tell the story through the experience of emigration to Britain. She considers a multiplicity of texts, while marveling at how, despite that multiplicity, there were surprisingly few of them directed to the theme, and they mostly recycled familiar stereotypes.

Those stereotypes, she suggests, projected an anxiety about moral decay among those abstracted from rural communities, about the tendency of Irish males to drink hard and fight often, and about the willingness of women migrants to embrace the newly-available delights of consumerism in “pagan” Britain.

The case she makes is rather persuasive. But, if she had extended her study from the Irish in Britain to those in the US, Canada, Australia, she might have come up with rather different conclusions. The sheer proximity of Ireland to Britain meant that the emigration inevitably had a “performative” element, with the coming-and-going of people being assessed by a stay-at-home audience caught between guilt and judgmentalism. Wills is quite right to say that the official and clerical fear of moral degeneration attached itself mainly to those innocent, under-educated souls who went from rural communities to the fleshpots of Brixton and Coventry—but were similar levels of concern often voiced about migrants from Dublin and other cities? It seems not—and she quotes texts like Donall Mac Amhlaigh’s Dialann Deoraí, which suggest that the Jackeens had already been given up as hopeless cases (money-grabbing, spineless, unreliable). On this basis, she argues that the anxieties voiced about emigration, not just in government or church reports but also in literary texts, were really fears about the effects of urbanization on rural youth (with Edna O’Brien’s The Country Girls providing “Exhibit A”).

This seems a just assessment. It also indicates the persistence of revivalist ideas into the 1950s and 1960s—especially the idea that there was something un-Irish or even anti-Irish about being an inhabitant of a big city (or, as John B. Keane memorably phrased it, one of the “perverts from a built-up area”[1]). But it might be worth asking whether the experience in North America or Australia was somewhat different, if only because the distances involved were so much greater, and it was harder for the Catholic church to send “emigration priests” like Eamon Casey to tend to the faithful, while checking on the faithlessness of their cousins or siblings up the road in a clearing hostel.

There is also the question of the limited time-frame within which Wills has chosen to work. It allows her to make valuable connections back to the neutral island of World War II (not least via her recurrence to Patrick Kavanagh’s monumental “The Great Hunger” as a study of emotional and cultural under-development), but also to engage in admirably detailed studies of a wide range of texts (including Tom Murphy’s A Whistle in the Dark or Richard Power’s Úll I mBarr an Ghéagáin). In doing all this, she makes some wonderful and suggestive connections with developments in cultural criticism and novelistic realism in the Britain of the period. The “ethnographic” element which she detects in autobiographical works by Mac Amhlaigh and Power is linked at various moments to works like Richard Hoggart’s The Uses of Literacy (with its equivalent lament for community decay from the time of his grandmother to the present) but also to the novels of the Angry Young Men of the later 1950s. This is brilliant analysis, which helps (among other things) to explain the obsession not only with cultural declinism in so many texts but also the sense of a wounded, brittle masculinity as something that lies behind much of the anger in Murphy’s great play. It may explain something else that Wills astutely notes—the fact that MacAmhlaigh’s main focus remains on male-male relationships in his narrative, despite the fact that he got married and settled to a domestic life in England. (Perhaps another influence here is the “heroic” An tOileánach of Tomás Ó Criomhthainn, which also disposes of a wife and children in a single paragraph).

Wills remarks on how few accounts of waged employment are given in prose. That might be because the work was often dull and uninteresting. But, in a wider time-frame, extending back through the 1930s to the early years of the century, she might have included Beckett’s Murphy or, indeed, the first novel in Irish, Pádraic Ó Conaire’s Deoraíocht. I suspect that Irish Americans, whose art often celebrated work, might offer more instances of hard work described, derided, or celebrated—but surely there are more among the Irish in Britain too?

This book is alert to an irony—that the migrant Irish sometimes continued to uphold the culture responsible for their plight. But not all did—John McGahern recalled a “Clare man” who heard of a flood in his native village and said “May it never stop…May they have to climb trees. May it rise higher than it did for fukken Noah.”[2] It is also clear-eyed in exploring the ridiculous imputation of guilt to those who “deserted” the native land, a tradition of priggish essentialism which went back as far as Maud Gonne, who considered emigrants to be apostates[3] (as someone with close-up knowledge of poverty in the west, she should have known better). Of course, this kind of thinking was a classic projection of an even deeper guilt felt by those who remained. The failure of their independence project was registered less in votes by young people on election day than in the practice by young people of voting with their feet (many of these young people helped to build up the Labour movement in Britain, another topic which seems surprisingly under-represented in migrant texts).

If women adjusted more quickly and more fully to life in British cities, says Wills, that may have been because they had already made more prior adjustments in the urbanization of life in Ireland, but also because through schools and churches attended by their children, they came to know the host community and to integrate into it. Men were slower to make such bargains with modernity—and those many navies who never married but lived on the lump often failed utterly to integrate, losing one community without ever quite gaining another. Their plight was worst of all and became in years after the 1960s the subject not only of rightly-concerned Catholic priests but of many worried British sociologists.

As noted by Wills, Ireland was, in the period, covered not much smaller in population than the area of Greater Birmingham. Many of that city’s products probably took it as axiomatic that they might have to leave in order to find work or a partner or a less restricted life—but few of them would have shed tears over that and fewer still would have sentimentalized either those who went or those who remained on that basis. There is something over-determined about many Irish figurations of emigration…perhaps because so much of it was often forced against the wishes of a home-loving people. But, equally, there were many who enjoyed the better wages and wider freedoms abroad, especially in a place which allowed ongoing contacts with home.

Was it true that it was the best who left? Doubtless, many brilliant graduates and hard-working builders made a happy life in Britain; and among these were many persons of genius, who stormed the citadels of British universities, media organizations, and civil service, or made big money in the worlds of construction and road development. For some of these, emigration was more an option than a dire necessity—they went because their genius was such that the home-country could never fully contain them. On the other hand, lots of emigrants were uneducated, demoralized folk, clutching nothing more than a cardboard case and five-pound note for passage money; and a depressing number of these never rose above a life of unregistered lump-work, bed-sit squalor and binge-drinking.

Perhaps emigration had elements in common with colonialism (while being an ultimate effect of colonial-capitalist policy). It removed from the homeland some of the most energetic as well as some of the least endowed people. In England they were expected—as were British out in the colonies—somehow to impersonate just the kind of average home types they manifestly would not or could not be. In the case of the British, the response was a perpetual enactment of imagined cultural norms—tea taken by men in white suits under the broiling midday sun of India. In the case of the Irish in Britain, a similar acting-out of a national stereotype may help to explain the phenomenon, noted by Wills, of groups performing “The Life of Riley” when the reality that they were living, either as efficient doctors or casual laborers, was different indeed.

Altogether, Wills has written a thoughtful, open-minded and lucid book that shows that the “great silence” which enveloped commentary on the Irish language in independent Ireland often characterized the emigrant experience too.[4] The Irish, though for long the largest migrant group, were seriously under-recorded and under-studied—with the result that they sometimes seemed to have become invisible and inaudible to themselves. The creative writers often recycled old tropes—not mainly (I think) to feed prejudices in the home country so much as to please an international readership that had already decided what Irishness might be. In more recent years, however, much of this has been set to rights, not only in fine novels and narratives, but in valuable oral surveys that highlight the positive role played by women in the process of integration. One of the most moving and beautiful aspects of this compelling narrative is Wills’s account of her own mother and of her attempts to negotiate for her family between two exacting cultures. She succeeded magnificently—and one outcome is this valuable and necessary book.