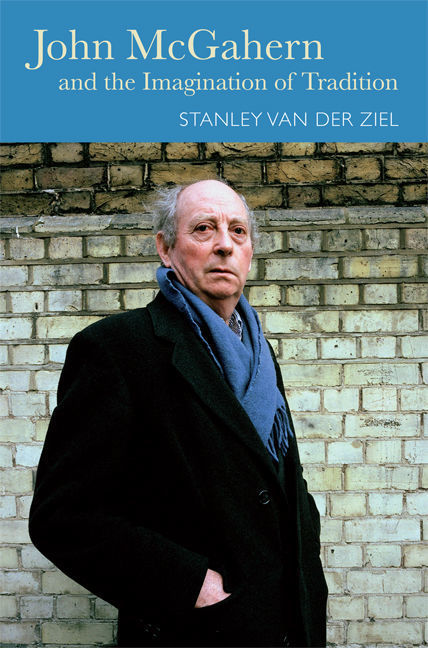 Stanley van der Ziel’s John McGahern and the Imagination of Tradition is an excellent book. Well written, well organized, well thought out, and useful, the text sets forth two main arguments about the author’s work, which I believe to be accurate, in convincing detail. These two arguments explore McGahern’s concern with literary tradition and his subtle reworkings of it. The book is clearly the result, on the author’s part, of many years of thinking carefully and closely about the great Irish writer’s novels and short stories. As such, it establishes itself as an unignorable presence for future studies and discussions of McGahern’s fiction.

Van der Ziel makes his aim very clear on the opening page of the preface. He takes it “as read” that McGahern’s works refer to and draw figures, actions, and topics from the social and historical context of his life (ix). However, van der Ziel distances himself (quite rightly) from attempts to relate McGahern’s fictions closely to the events of the author’s life. Later, van der Ziel points out how much McGahern disliked it when commentators did so, and how Memoir (2005) is, at best, of dubious reliability as an autobiographical document (as, I suspect, most autobiographical documents are). It is better seen as an essay in creating the author’s own image (14-15). Instead of historical and social context, instead of biography, van der Ziel offers literary history. His aim is “to elucidate how McGahern’s imagination was formed by his extensive reading of and thinking about classic literature” (ix). He is interested in how McGahern utilizes swathes of the European literary tradition. Inspired by and at times challenging it, McGahern makes it his own and transforms its conventions for his own complex purposes. This is an argument that is correct, I believe, and salutary in times when literature is often seen as historical-social documents (which they are) and biographically generated (which they also certainly are, although in such complex and hidden ways that it is usually unwise for the serious scholar to get involved in them). Literature begets literature, especially with such a reader and writer as McGahern. He famously and provocatively told students in creative writing courses that the best thing they could do was read. By referring to the author’s engagement with Shakespeare, Jane Austen, Wordsworth, and others, van der Ziel’s study indicates just how widely and profitably McGahern took his own advice. Even his view of the relationship between the individual writer and tradition is literary. Van der Ziel points to the embedding of this view in ideas of the same found in T.S. Eliot and W.H. Auden (2-5). One should note, too, the way in which the childhood encounter with the books in the Moroney family library looms large in all McGahern’s accounts of his early years (5-7). Books made the life and the writer.

Van der Ziel ably leads the reader through McGahern’s own individual canon, the favorites, the predecessors, the sources, the literary compass-points that he created for himself (9). The study is not a list of references, but rather a scrupulous establishment of literary sources, of McGahern’s reshapings of these documents, and of the functions to which references are put in his fictions (10). Toward the end of the preface, van der Ziel writes of McGahern’s belief in the importance of “good manners of the mind,” a concept that includes a subtlety and tact of reference (20-21). This concept is a recurrent motif in van der Ziel’s treatment of intertextual references in McGahern’s work. McGahern often does not ostentatiously parade his sources, but frequently hints at them, occludes them, and, to a degree, ironizes them. The Barracks and Among Women offer fine examples of the deceptive surfaces and subtle undercurrents of McGahern’s fictions. Both novels present themselves as realist texts, while subverting realism’s central occlusion of life and text through phonological organization, patterning of motif and action, and a range of verbal and thematic borrowings from Shakespeare, Joyce, and Proust.

Van der Ziel’s book is organized in a wholly perspicuous manner. Chapter 1 looks at McGahern’s employment of Shakespearean references. There is a mass of echoes and citations of Shakespeare (some comic) in McGahern’s fictions, but among them van der Ziel emphasizes the author’s use of King Lear, especially in Amongst Women (31-35), and his deployment of motifs of the stage and the idea that his characters’ are knowingly or unknowingly acting in their lives (44-52). Chapter 2 details McGahern’s shifting “Augustan sensibility,” from an interest in Swiftean satire through The Pornographer to a more benign Augustan interest thereafter. The chapter demonstrates McGahern’s growing occupation with the pastoral (however shadowed) and in Jane Austen’s advocacy of “manners” and imagination as ways of making life and society a little more bearable. Chapter 3 turns to McGahern’s engagement with the Romantic tradition. Van der Ziel makes a very convincing case for McGahern’s complex use of Wordsworthian concerns with nature, childhood, memory, and the local and ordinary unglamorous that opens out on and into the extraordinary and the universal. Van der Ziel’s discussion of The Barracks and its protagonist is illuminating in this context. Chapter 4 is a long and intelligent discussion of McGahern’s complicated relationship with the European realist tradition. The Moroneys’ library and its traditional contents come up here too (119). Van der Ziel writes tellingly and stimulatingly of McGahern’s twentieth-century reworkings of the realist conventions of authentic detail, of art as a mirror of the real, of complex story material, and of the transparency of narrative language. Van der Ziel’s discussion of McGahern’s playing with self-referentiality of language in what appears an arch-realist text, The Barracks, is completely convincing (125-128). Despite such revaluation and playfulness, however, it is also clear how much McGahern actually respects realist fiction. After all, he chose Middlemarch as a book to have on a desert island (120).

Many readers will be eager to study the final chapters on McGahern’s engagement with modernist traditions and late twentieth-century philosophy. They would be wrong to dash through the earlier chapters, however, for these are also of great interest to the student of McGahern’s writing. But chapters 5 and 6, on McGahern’s fascination with and reworking of Marcel Proust, W.B. Yeats, and James Joyce, are, indeed, fine pieces of scholarship. Van der Ziel offers a detailed discussion of how Proust influences McGahern’s notions of self (158-165) and time (166-174). With Yeats and Joyce, van der Ziel examines McGahern’s encounters with and reworking of their writings. These studies are placed neatly in a biographical context, and their complexities—single lines, thematic wholes, and strategies of organizing narratives—are fully examined. Van der Ziel’s discussion of the theme of “talk” and its multiple functions (something that he sees McGahern deriving from John Millington Synge, Samuel Beckett, Flann O’Brien [whom McGahern did not much care for], and late Joyce)—talk as story, talk as healing, talk as evasion—is lucid and insightful (213-218).

Chapter 7, on “Philosophies,” is—partly—the least satisfactory of the chapters. Perhaps more on McGahern’s relationship with Camus and interest in the nouveau roman would broaden the study’s scope even more. But the chapter does contain a fine examination of “McGahern’s Beckett” (229-240). Here van der Ziel discusses the motifs of exile, waiting, boredom, and death, as partly drawn from a Beckettian world, but given a particular shape in McGahern’s configurations of them. As van der Ziel points out, McGahern and Beckett simply share similar concerns. He even suggests that McGahern may have influenced Beckett (242-244), although this is the only point in the book where I find van der Ziel’s argument less than convincing.

Van der Ziel’s John McGahern and the Imagination of Tradition is a fine book, subtly argued, carefully documented, methodologically sensible, and lucid, revealing valuable perspectives on a great writer. Even blasé McGahern scholars will learn a lot. Its central argument that a lot of literature (not just McGahern’s) comes from an imaginative engagement with literary tradition and not just with life (as far as these are distinct) is a powerful and in McGahern’s case convincing one.