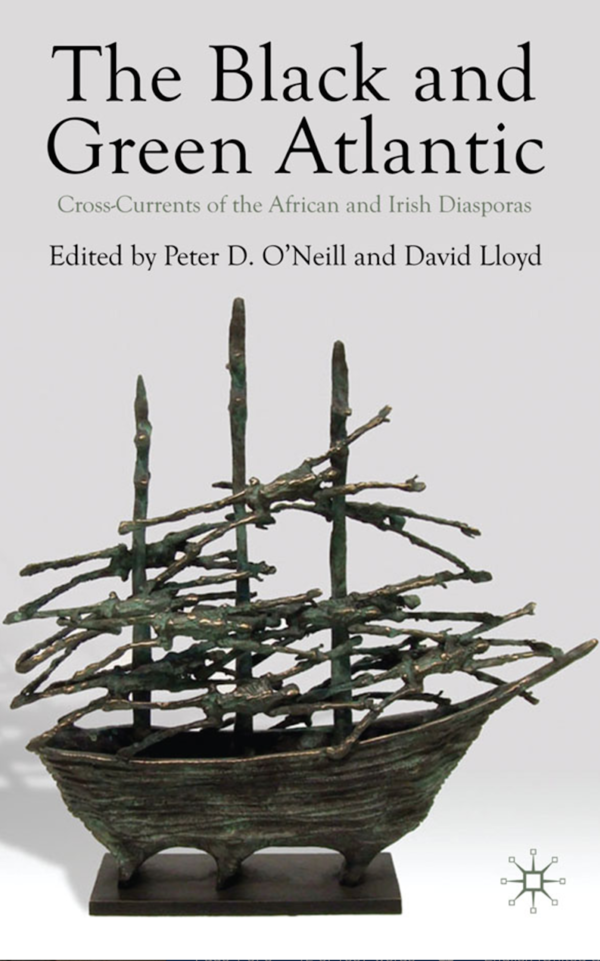 The Black and Green Atlantic: Cross-Currents of the African and Irish Diasporas. Edited by Peter O’Neill and David Lloyd. New York and Basingstoke: Palgrave Macmillan, 2009, 283 pp.

Peter O’Neill and David Lloyd’s The Black and Green Atlantic: Cross-Currents of the African and Irish Diaspora is a bouquet of different approaches to a massive endeavor: that of understanding the prolonged interaction, past and present, between two major diasporic communities, and through Paul Gilroy’s transatlantic paradigm of the Black Atlantic. The editors state their dual commitment to eschewing a “weak ethical desire” for solidarity, as well as an over-emphasis on hostility, an investigative mode which has long  supported the invocation of this history as a parable about race antagonism in the US (xvii). In his contribution, Lloyd evocatively describes the radical potential of this improved understanding, when he suggests:

[O]ur project is to retrieve from the language of race the alternatives it negatively encodes. These represent as always the never finally erasable potential for imagining otherwise, for re-igniting the recalcitrant potential of subordinated cultural formations, and accordingly must never be forgotten or underestimated, weak as their prophetic or messianic power may seem in a moment of crisis and state violence, war and ethnocide like our own. (18)

Nine years after its initial appearance, this volume is still as thought-provoking in this respect as when it first appeared, and O’Neill’s remark may have even found increased resonance. As the authors warn in the introduction, no totalizing bottom line may yet be formulated, but different histories of cooperation, antagonism, competition, and solidarity between Black and Irish individuals and communities provide “fascinating repertoires for contrapuntal thought” (xviii).

The collection is made up of diverse accounts of ambivalent connections between diasporas, complicating dominant narratives of “Black and Green” encounters. O’Neill’s contribution, analyzing nineteenth-century cartoons, shows how anxieties about race and gender in San Francisco were reflected in the stereotyping of Chinese men and Irish women working in the “liminal zone” of domestic service (119). Nini Rodgers reminds us of alternative histories than those generally given in accounts of Irish racialization, describing the trajectory of Ulster Presbyterians arriving in the US in the eighteenth century. She illustrates their navigation of the complex changing constellations of political developments in the British Empire and the US racial state with readings of three Irish authors of antislavery fiction. Cedric J. Robinson analyzes the impact of playwright Eugene O’Neill on Black participation and representation in American theater, contextualizing O’Neill’s ambivalence toward the Black protagonist of his Emperor Jones with his affiliations with blackface minstrelsy. Fionnghuala Sweeney examines R.R. Madden’s accounts of Jamaican society in A Twelvemonth’s Residence. She explores the way in which contradictory pulls of antislavery, Irish Catholicism, and imperialism mediate Madden’s accounts of his interpersonal encounters and genuine interest in the future of the island within the British empire. Particularly interesting is her convincing reading of how African Muslim personal acquaintances became, for Madden, figures through which different ideological outlooks could be reconciled.

Building on the work of Paul Gilroy and Noel Ignatiev especially, the volume contains several valuable theorizations on the interactions between the Black and Green Atlantic. Lloyd’s essay revisits and problematizes the process described by Ignatiev as “becoming white,” in his comparative analysis of the racialization of the Irish in relation to state formation in the US and Britain (4). He persuasively shows that this process was not only driven by labor competition, but also shaped by historical cultural processes, such as the different significations of Irish difference and the affordances of different diasporic contexts for the varying success of Irish communities. Michael Malouf reads Jamaican poet’s Michael S. Collins’ “Michael Collins” as an alternative vision of the Black and Green Atlantic, using it to explore the possibilities and limitations of thinking of the two diasporas together. He suggests they are most productively approached as a “fugue” to bring out the possibilities of non-identitarian solidarity (149). Speaking as both an academic and a community activist, Denis O’Hearn argues that disparate attempts at new forms of community-building across the globe, connected in their rejection of western modernity, provide an example and encouragement for future movements. He compares the fragile “utopias” created by political prisoners in Ireland in the 1970s and Zapatistas in the 1990s, zooming in on their prefigurative politics and their rejection of dominant Western modes of thought and action (242).

A major concern running through the collection is the need for innovative approaches and avenues of investigation to open up the interpretative and imaginative potential of this encounter. Mark Quigley analyzes how hip hop group House of Pain performs “greenface,” minstrelsy of Irish identity (65). Combining close reading of their lyrics and insights from critical theory, Quigley makes a compelling case for how their performative destabilization of racial categories can be read as a political act of solidarity with “gangsta” rap performers besieged by mainstream cultural commentators in the 1990s. Jonathan Tadashi Naito explores the possibilities of the “Black Beckett,” analyzing Beckett’s translations of Nancy Cunard’s Negro: An Anthology (1834) and Beckett’s well-known enthusiasm for an all-Black performance of Waiting for Godot (83). Naito’s essay ultimately demonstrates that compelling new questions can be asked from the oeuvre of even canonical authors when they are studied in new constellations. Anne Gulick examines Black internationalism in C.L.R. James’ The Black Jacobins in the context of the internationalism of human rights law. She suggests that these discourses may productively inflect each other in the “messy multiplicity of political community in the present” (226).

An additional strategy to open up critical possibilities for solidarity and affiliation is the assumption of new vantage points. This may be seen throughout the volume but is especially notable, in different ways, in the contributions of Stacey Lettman and Lee M. Jenkins. Lettman reads together poems by Trinidadian-Canadian Marlene Nourbese Philip and Irish Eavan Boland, arguing that their poetry converges stylistically as both poets give expression to the colonialist and patriarchal functions of the English language in their search for a proper language of poetic expression. Jenkins’ contribution argues for a “productively provincial” approach (175). She reads the convergence of the Black and Green Atlantic in Cork, which is characterized as a conduit and vortex where “ideas generated by collusions and collisions between Cork and Black America” constantly coevolve (166). Of particular interest is Jenkins’ fascinating account of the connections Claude McKay, Marcus Garvey, and Frederick Douglass had to the city.

At their best, the chapters of The Black and Green Atlantic combine daring perspectives and interdisciplinary methodologies to showcase the possibilities of “contrapuntal thought.” Three excellent essays stand out especially in this regard. Marjorie Howes fosters our appreciation of the figure of the Irish scullery maid, the “Bridget,” in major Irish modernist authors, by carefully peeling back the layers of her cultural significance as an ambivalent figure of modernity. Howes artfully weaves together accounts of Bridget’s economic precarity in navigating the Atlantic labor market, with her paradoxical cultural significations in anxious debates about capitalist developments and race relations in the US. She then examines Irish maids in the works of George Moore, W.B. Yeats, James Joyce, and Norah Hoult. Amy E. Martin recounts how within the ranks of the Fenians, new tactics of fundamentally transnational action developed that significantly contributed to other anticolonial insurgencies. British attempts to suppress Fenian organization also contributed to the process of modern state formation in Britain, as biopolitics and the concept of the terrorist developed in tandem. Martin combines political philosophy, conceptual history and analysis of press coverage to capture the radical spark of the Fenians in a transnational framework. Anthony R. Hale brings a new perspective to what he terms the “conundrum of [John] Mitchel’s racism” by reading Mitchel together with Black abolitionist David Walker, a contemporary figure of comparable passion and militancy (199). Hale approaches their writings from multiple angles, including the contexts of their broader philosophies of liberation and their biographies. His combination of diligent analysis with personal perspective makes a solid case for his ultimate call to develop an analytic approach that is unafraid to contend with ambivalent legacies and can serve as an antidote for utopian tendencies in studying histories of mobilization.

On the whole, the collection is more strongly focused on the Green Atlantic for its objects of analysis, while the Black Atlantic provides many of its critical frameworks, with Paul Gilroy and Frantz Fanon featuring as particularly frequent interlocutors. O’Neill and Lloyd’s volume makes a virtue out of describing a moving target, as the chapters wield different methodologies, lenses, and scales of analysis. This variety is both the volume’s weakness and its strength, as the chapters offer many tantalizing glimpses of alternative modes of thought in, at times, too quick succession to fully develop. However, the contributions give a fresh perspective on well-known Atlantic figures and encounters. They showcase new methods and, no less important, provide an exciting sense of the possibilities of this field of enquiry to hone insights into fragile intercultural solidarity and its attendant surprising forms of cultural mobilization. The volume will certainly provide new insights to scholars of the Irish and African diasporas, but also holds relevance beyond the Black and Green, as a source of inspiration for students of social mobilization, cultural activism, and diasporic history and culture.