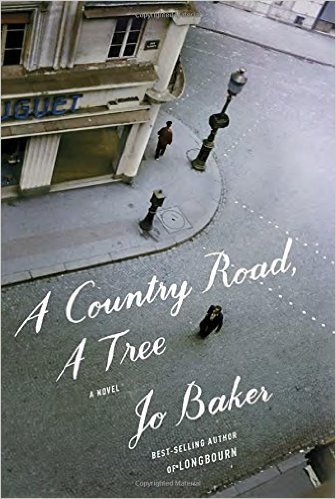 Perhaps the closest that Samuel Beckett came to writing his autobiography is the short novel Company. In that “fable of one fabling of one with you in the dark,” Beckett relates how, as a boy, he would climb a sixty-foot-high tree in the garden of his Foxrock home in the south Dublin suburbs.[1] Sitting there in stillness for a moment, he would suddenly plunge downwards through the branches:

You climb to near the top of a great ﬁr. You sit a little listening to all the sounds. Then throw yourself off. The great boughs break your fall. The needles. You lie a little with your face to the ground. Then climb the tree again.[2]

Such “potentially suicidal behaviour,” as his biographer James Knowlson termed it, was tempered by the young Beckett’s understanding, though surely not certainty, that the tree would always break his fall.[3] This captivating image of Beckett repeatedly climbing the fir tree only to fling himself off it opens Jo Baker’s A Country Road, A Tree. As the boy falls, he smacks into the branches and is “whipped” by the twigs, before he crashes onto the ground, bloodied and breathless (11). A figure of irrepressible stoicism, he dusts himself down, before climbing the tree once more, promising himself that this time “he would skim up to join the clouds. This time, he would fly” (12). There is a reverberation here of the Unnamable’s famous pledge to “go on,” although here the similarity must end with the naïve, earnest optimism of Baker’s young Beckett.[4]

A Country Road, A Tree—the title taken from the opening stage directions to Waiting for Godot—is a kind of Künstlerroman that charts Beckett’s frequently hazardous life and his struggles to write during the years of World War II. A fictionalization of the events of Beckett’s life from 1939-1946, the central premise in the novel is that the war definitively shaped his artistic development; according to the author’s note to the book, the war marked the dividing period between Beckett’s “adolescent” life and art to his growth “as a writer and as a man” (333-4). It is a compelling theory: in the immediate years after the war, Beckett would write and have published some of his greatest works, including Molloy, Malone Dies, The Unnamable, and Waiting for Godot. Throughout A Country Road, A Tree, the images and themes of disintegration and endurance that Beckett will explore in these works recur directly and indirectly. Baker’s novel re-affirms an idea that has long been recognized: the catastrophe, violence, and horror of the war reinforced Beckett’s sense of the irrationality of existence which found its most grotesque expression in the supreme cruelty of this period, out of which grew his distinctive aesthetic. Beckett’s post-war vision of reality was a most political art rooted in the absurdity of personal experience. Adorno expressed it this way: “Beckett’s plays are absurd not because of the absence of any meaning, for then they would be simply irrelevant, but because they put meaning on trial; they unfold its history.”[5]

A Country Road, A Tree is an audacious enterprise, for it is no mean task to enter into the mind of one of the twentieth-century’s most evasive and unrevealing artists. The novel tells the story of Beckett’s frequently difficult relationship with his partner and future wife Suzanne Deschevaux-Dumesnil, his friendships with James Joyce, Paul Leon, and later, Anna Beamish, Beckett’s important work for the French resistance (which he characteristically understated after the war), and his panicked fleeing of Paris from the Gestapo to the village of Roussillon, where Beckett worked on a farm and waited out the end of the war. The central relationship between Beckett and Suzanne, which was frequently strained to breaking point at this time, is poignantly and delicately rendered. Suzanne, a mixture of weary frustration and unthinkable loyalty, is as interesting a character as Beckett is himself. Together, they form the Vladimir and Estragon of the novel, inexplicably bound, frequently squabbling, unsure of where they are going and what will happen, unfaithful, yet enduring the misery together even as the emotional chasm between them grows. “It might be better to let go,” we are told. “They don’t let go” (175). Baker’s skill for characterization is masterful; her aging James Joyce is vividly portrayed as the significant figure he was for Beckett during the frantic days of the Nazi invasion of France; Joyce is full of charisma, quick-wittedness, enormous generosity, unassuming friendship, and occasional vitriol.

On the whole, Baker makes a brave decision to let Beckett’s story speak for itself. A Country Road, A Tree is sparsely told and offers little by way of the background details of other fictional biographies. Though Beckett is working on Watt throughout the novel, for instance, we are never explicitly told this, so there is something of an assumption on behalf of the author that the reader will immediately recognize who the Beckett of the story is and why his story is worth telling. Just how exactly Beckett’s experiences of the war will shape the aesthetics of his post-war writing is left largely untouched, apart from a brief epiphanic moment after the war when Beckett has returned home to Ireland. In his mother’s room, and catching a glimpse of his “angular and black and frank” silhouette, Beckett realizes that “the world is not and never was in sympathy with him, nor with anybody else. But this is the moment when everything changes…and his eyes are trained on darkness and his ears on  silence. On that stark figure, framed there on the threshold, unknowable and his” (292). The echo of the Unnameable is unmistakably heard again. The significance of this epiphany is, however, rather un-Beckett-like, for Baker offers an oddly uplifting conclusion to the novel that echoes the young Beckett’s determination to “fly” at the outset of the novel (12). Beckett, it is implied, finally reaches his aesthetic destination at the end of his artistic journey: “He can find his own way now, in the dark. He doesn’t need the light” (292). The Beckett that would emerge after this moment is the Beckett that tends towards deracination, bareness, and silence.

In Beckett, there are never simple endings, only compulsions to begin again. Beckett told Ruby Cohn that when he started writing the short story Company he “broke down. But must somehow.”[6] This sense of the artist struggling to break through the dead-ends, of going on, is everywhere in A Country Road, A Tree. The first section to the novel, in which the stifling atmosphere of Beckett’s home life in Ireland is brilliantly recreated, is entitled “The End,” while the final image of the novel is of Beckett working on Watt: “He dips his pen into the ink, and fills it, and wipes the nib. The pen traces its way across the paper. Ink blues the page. Words form. This is where it begins” (331). The division of Beckett’s career into pre- and post-war is neat, but it was not quite so obviously straightforward, and, in spite of the stirring epiphany, the author resists oversimplification: Baker’s story of Beckett’s journey is necessarily full of stops and starts, of diversions and distractions, of near-silences and of falling into silences. Beckett, as was the case, hardly writes at all during the war; instead, there is a preoccupation for food, for sleep, for mere survival. Nonetheless, the overarching story of a young boy who dreams of flying off the treetop into the clouds and who ultimately, after years of exhaustion, pain, and struggle, finally finds his true voice as an artist, is perhaps a little too elevating to chime with Beckett’s life and work. Yet this is a beautifully written and fascinating novel, expertly told with precision and control; the Beckettian style of incomplete, halting sentences that punctuate that free indirect discourse are never poor imitations or parody. Instead, Baker’s technique helps fictionally to re-create Beckett’s consciousness while simultaneously deepening the sense of influence that he generally had on modern writing in his wake. Moreover, A Country Road, A Tree is always faithful to Beckett’s compassion, his moral, artistic, and intellectual integrity, and his abiding concern for humanity.