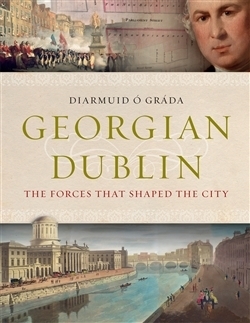 When we think of Georgian Dublin we think of the classic tropes: fanlights, James Gandon’s iconic buildings, the elegance of Merrion Square. At first glance, Diarmuid Ó Gráda’s book promises to deliver just this. The sumptuous cover, with its reproduction of a Wide Street Commission map, its portrait of Gandon, its views of the Liffey and of the Custom House, and Francis Wheatley’s famous painting of the Volunteers on College Green, promises a stately procession through familiar ideas. One could be forgiven for thinking that the forces in question were those of law, architecture, and the Protestant Ascendancy. But readers expecting a coffee table book, aimed at the general reader and offering a succession of familiar faces and buildings, may well be disappointed, for Georgian Dublin: The Forces that Shaped the City is not quite what it appears, and that is both the book’s weakness and its strength.

In thirteen chapters, Ó Gráda ranges over a broad spectrum of city development and urban life, but the city he focuses on is far from that of the elegant squares. From “Crime and the Failure of the Legal System” (Chapter 5) to “Public Health” (Chapter 6) and “Prostitution” (Chapter 12), the book is primarily concerned with the challenges created by the rapid population growth of the long eighteenth-century and the ways in which that growth placed enormous pressure on housing, healthcare, and policing. In many ways, the fact that Georgian Dublin doesn’t tell the story of the rich and powerful is a strength, as the poverty, deprivation, and crime associated with the Georgian city have certainly not received the same degree of focus as the more rose-tinted aspects of Georgian life. However, the tension between the book’s glamorous production values and its serious, often grim content is not confined to the cover: throughout Georgian Dublin there is an underlying sense that the book isn’t quite sure what it is meant to be: a coffee table book for the general reader, or an academic study of social deprivation.

Georgian Dublin is beautifully produced and peppered with wonderful illustrations, many of which will be unfamiliar to even those with a good knowledge of Georgian Dublin, but the book does suffer from a complaint familiar to many history books. While these images show Dublin in its squalor and splendor, their connection to the text is often tangential, leaving the images to function, in the main, as pretty baubles rather than integral elements of the book’s argument. Georgian Dublin is far from the only book to suffer from the historian’s habit of privileging the written word over all other source material, but given the richness of the illustrative material evident here, this is certainly a missed opportunity.

The writing style is generally accessible and avoids slipping into academic jargon. However, the passive voice looms large in this book (an occupational hazard for historians) and speculative sentences abound. It may have been an editorial, rather than an authorial, decision to limit the number of endnotes, but this undermines the academic rigor of the research, enabling far too many unsubstantiated and speculative statements to slip past unchallenged, such as: “some of the creative writing was in the Irish language and therefore might have gone unnoticed” (26), and “They [women] were perceived to be more morally robust than men…” (217). There is nothing then provided to indicate who perceived women to be more morally robust. Later, Ó Gráda observes that “there was a tolerance of cruel violence” (210). This may well be true but, as in many other places, Ó Gráda provides no evidence to substantiate the point.

The issue of referencing is tied to the book’s confused identity. While the endnotes are inadequate for an academic book, the book is furnished with no fewer than six appendices, fascinating for a scholarly audience but unnecessary for the general reader. There are also some careless turns of phrase, most notably where post-Union Ireland is referred to as “merely a colony” (3). Some ideas also need further development. Ó Gráda’s is undoubtedly correct that “Scholars are divided over the impact of the Union in 1801” (106), but fails to engage in the discussion that this statement should prompt.

Ó Gráda has clearly mined a considerable amount of archival and contemporary printed material for this book, and there are gems of information scattered throughout. He makes good use of the Wide Street Commission surveys, which reveal a lot of information about what businesses were in the city and who lived where. For example, in one section of George’s Lane (now George’s Street), there were five grocers, two shoemakers, two publicans, two gunmakers, two breeches makers, two apothecaries, a jeweller, a watchmaker, a bookseller, a stationer, a printer, a paper stainer, an instrument maker, a saddler, a tobacconist, a mercer, an optician, a perfumer, and a lace man (86). For the era before Thom’s Directory and detailed census returns, these surveys are a marvelous resource for researchers, though it’s a shame that the location of this material remains uncited either in the bibliography or the endnotes.

Ó Gráda makes good use of newspaper accounts to enliven his prose. The Hibernian Journal is a great source of colorful quotes, not least in this description of the “herds of low ragamuffin vagrants, basket-boys and servants bellowing forth blasphemy and obscenity” who disturbed those promenading around St. Stephen’s Green (qtd., 52). However, there are missed opportunities to bring the story of the city to life, particularly so when discussing some of Dublin’s “characters.” Francis Higgins, the “Sham Squire” (15); Buck Whaley, whose extravagance “bought him little contentment” (50); James Gandon, the celebrated architect (12, 30); and Margaret Leeson, “the doyenne of Dublin Madames” (273), all merit more than a passing glace. There is little more than a cursory sense in the book of the myriad people who lived in the city.

Georgian Dublin is at its best when detailing the struggle to survive in a rapidly expanding city. Ó Gráda’s exploration of the underbelly of the Georgian city is well done and his discussion of poverty, prostitution, and disease is, at key moments, compelling. The stories from the Foundling Hospital are particularly affecting with harrowing accounts of children being given the tranquilizer diacodium, which allowed them to die quietly (184). The book also makes interesting points on the struggle for control of public urban space and on the exodus from the city, which was led by the wealthy and facilitated by the expanding road network. Ó Gráda also provides fascinating accounts of the hostility to any moves towards mass production and recounts the way in which wallpaper manufacturers, in particular, were targeted—the premises of wallpaper producers were regularly attacked, while in 1757, one manufacturer, Thomas Ashworth, was murdered in Donnybrook (240).

Ó Gráda’s book is not a definitive history of Georgian Dublin, but it is a very welcome addition, not only to the history of the city but also to the urban history of Ireland. It is a great shame that Ireland’s other cities have not attracted the same level of attention from researchers, writers, and publishers as has the capital. While aspects of the book fall between two stools, on balance Georgian Dublin: The Forces that Shaped the City does offer a significant contribution to our understanding of the pressures created by the rapid expansion of the city and explores the challenges faced by those struggling to survive, while the beautifully reproduced images of the Georgian City will repay many return visits to its pages.