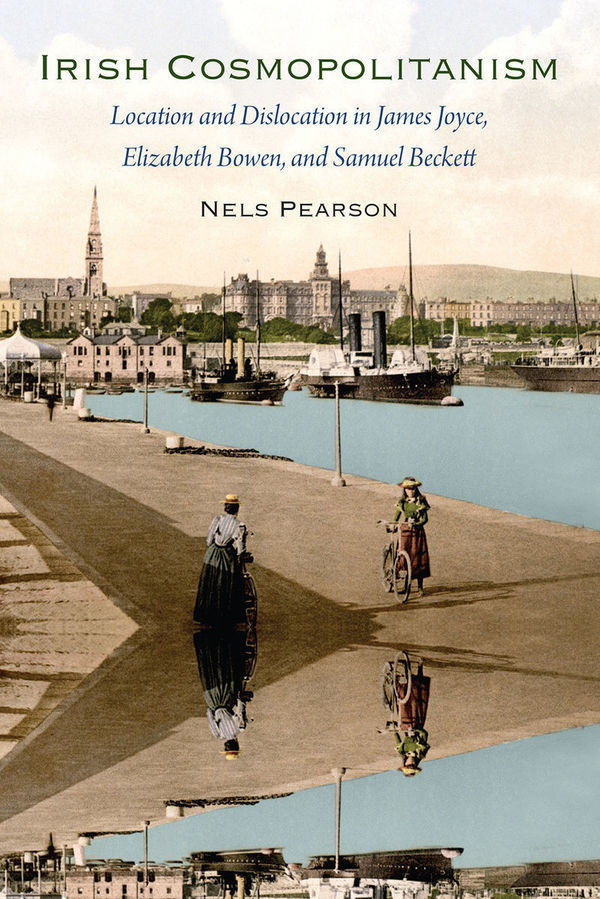 The emergence over the past decade of “the new modernist studies,”[1] with its emphasis on a plurality of cultural modernisms developing in a variety of historical and geographical contexts, has prompted scholars in Irish Studies to rethink many of their basic assumptions about Irish literary modernism. One question to arise, which seems especially apposite in our current era of failed states and rapidly changing nation boundaries, is this: What or, more precisely, where is the generative locus of Irish expatriate modernism? Throughout much of the twentieth century, the answer was Europe’s cosmopolitan modernity, this vibrant multicultural space where artists such as Joyce and Beckett, living in self-imposed exile, developed radically new aesthetic forms to explore, on a cosmic scale, what it means to be human in an age of fragmentation, skepticism, and profound societal changes. According to this familiar teleological narrative, dovetailed by broader mid-century readings of Anglophone international modernism, Ireland perfectly epitomized all the trappings of the outmoded nation-state that bound the individual to prior historical orthodoxies, while cosmopolitan Europe provided the model for a post-national, Kantian ethics of global citizenship.

Today, in our own age of ongoing geopolitical disasters, such optimism seems profoundly misguided, partly because exile likely calls to mind the mass displacement of indigenous populations, and any thought of a welcoming cosmopolitan community surely gives place to images of refugee camps and right-wing politicians trumpeting ethno-nationalism. With the sustained influence of postcolonial theory on Irish Studies in mind, we are properly skeptical of any approach that fails to account for the western biases and cultural imperialist assumptions embedded in the term “cosmopolitan.” Equally important, scholars are now quick to locate the origins of Irish literary modernism in the specific history of Irish (de-)colonization. By privileging the local over the global—or, more frequently, the local as impacted by the global—postcolonial critics have theorized Irish expatriate modernism as emerging out of a crisis of nationhood rooted in the conditions of imperial hegemony, focusing in particular on how writers such as Joyce, Bowen, and Beckett consistently expose, destabilize, and re-appropriate the (gendered) discourses of imperialism and nationalism.[2]

All the more surprising, then, that Nels Pearson’s new book employs a title that seems decidedly anachronistic, Irish Cosmopolitanism: Location and Dislocation in James Joyce, Elizabeth Bowen, and Samuel Beckett. What the reader quickly realizes, however, is that this work is not a return to, but a fundamental reformulation of, earlier theories of exile and global citizenship. For Pearson, the generative locus of expatriate Irish modernism is the space of colonial departure, “the border itself” (8). His point is both literal—key moments in Joyce, Bowen, and Beckett are often set at coastal locations—and theoretical. Coastal borders are physical markers of a more fluid, conceptual space, indicated by the paradoxical identity formation contained in the book’s title, where Irish artists struggle to reconcile national and global consciousness, the particular and the universal. As Pearson rightly points out, what makes this attempt so vexed, and thus so powerfully generative, is that international consciousness has as its precondition a stable, rooted sense of collective identity that is unavailable to the colonial subject. Because the colony is already situated within a global nexus of transcultural exchange, the exilic gesture toward some cosmopolitan “beyond” necessitates the retroactive search for an original moment of national or ethno-collective belonging that remains eternally deferred. Considered from this vantage, exile represents a move from one condition of statelessness to another, while coastal borderlands denote locations where artists seek to express and work through the pernicious legacies of Ireland’s colonial past: the compulsion both to define an origin that cannot be defined and to embrace a false choice of national or international consciousness, Irish or cosmopolitan identity.

Pearson’s relocation of Irish expatriate modernism’s generative locus to the coast represents one of the book’s major contributions to the fields of modernist and Irish Studies. What is especially impressive, however, is that he immediately grounds these abstract theoretical claims in specific commentary on the primary texts. Starting with the book’s introduction, he shows how this pervasive sense of existing at the border—this condition of statelessness, of searching for an unobtainable origin, of being caught between identities—profoundly shapes the writings of Bowen, Beckett, and Joyce. This borderland consciousness, he argues, is evident in Bowen’s Lois Farquar when, recalling that feeling of being “locked in misery between Holyhead and Kingstown” (12), she momentarily apprehends her own prior state of rootlessness, which is only intensified by any thought of departure (Holyhead) or return (Kingstown). It persists as spectral traces in Beckett’s apocalyptic landscapes, what The Unnamable’s narrator describes as this “unfamiliar native land” (16), that evoke not some local or national origin that has been left behind but rather an ongoing existence at the border between here and elsewhere, the telluric and the cosmic. And it is, Pearson notes, the precise condition of Stephen Dedalus at the conclusion of A Portrait of the Artist as a Young Man, when he is drawn by the calls of “distant nations” that might welcome him as “their kinsman” (6), he yet fills his journal with musings about a coherent Irish racial ethos that always devolves into frustrated uncertainty. Although Stephen had once briefly imagined Emma as muse and “figure of the womanhood of her country,” he now writes, “Then, in that case, all the rest, all that I thought I thought and all that I felt I felt, all the rest before now; in fact … O, give it up, old chap!” (6).

Pearson’s theoretical and textual insights are developed more fully during the course of the book, as he devotes two chapters to each author. Some of the highlights include his analysis of Ulysses in chapter one, where he sets references to international commerce, by characters such as Mr. Deasy and The Citizen, within the context of historical debates about Ireland’s shipping ports. In so doing, he demonstrates how the book registers a crucial paradox at the heart of Irish ethno-nationalism. The movement’s reliance on a distinctly national phase of development, which fetishizes Irish identity, simultaneously enables and undercuts its drive toward healthy transnational economic and social integration. Chapter three offers a particularly useful theoretical account of Bowen’s relationship with British modernist fiction. In the works of Virginia Woolf, E. M. Forster, and others, moments of heightened aestheticism during which individual consciousness, liberated from time and space, seems to dissolve into the universal, depend upon a prior condition of “rootedness”: a stable sense of identity, nationhood, and national history. By contrast, Pearson shows that Bowen’s exilic condition of statelessness means that her gestures toward some capacious, universal “beyond” are always overdetermined by traces of Irish particularity and unresolved origins that cannot be negated. In chapter six, which addresses Beckett’s trilogy of novels Molloy, Malone Dies, and The Unnamable, Pearson productively complicates traditional philosophical readings that attend to the trilogy’s ontological and epistemological dimensions. The disorientation that Beckett’s narrators experience and the larger questions that these books raise about the very possibility of human self-knowledge do not occur in some abstract philosophical vacuum; rather, disorientation is, Pearson argues, precisely the condition of human subjects striving to define themselves within the terms of a local environment—Ireland as an unfinished nation—that remains in flux. Beckett’s works thus demand that we consider, in Pearson’s words, “a philosophical subject that is at once universal and not disengaged from historical processes—one that, even in its most fundamental aspect, is continually seeking or fashioning its place of origin” (125).

This emphasis on the relationship between the universal and the particular speaks to another important feature of Pearson’s book: his integration of more recent work in “cosmopolitics,” a field that seeks to define minority or subaltern modes of cosmopolitanism. Attentive to the lived realities of migrant existence while eschewing the neo-liberal tendency to embrace cultural relativism, such an approach enables Pearson to focus on subjects whose aspirations for international belonging are always underwritten by a critical awareness of “home” as a contested space, an origin point that remains unfixed precisely because of the dual impacts of colonialism and nationalism. In so doing, he shows how cosmopolitical theories provide an ethics of global citizenship that registers and holds in productive tension the gap between, on the one hand, aspirational discourses of universal human connection, which are experienced as both oppressive and liberating, and, on the other hand, the discourses of homeland, which persist as unfinished yet deeply alluring narratives of some primary attachment to local community.

Irish expatriate modernism consistently evinces this productive tension, not simply because for Joyce, Bowen, and Beckett Ireland remains an origin-in-process that they cannot unselfconsciously inhabit or categorically leave behind. Rather, as Pearson once again demonstrates through a series of fresh, nuanced, and historically grounded readings, that the act of bringing “one’s native irresolution abroad” (18) enables these writers to resist both orthodox constructions of national identity and idealistic notions of multicultural identity, while simultaneously registering the visceral need to embrace a sense of national or ethnic belonging within the international community. Home and away are both fictional locales, yet they must be preserved as self-consciously generated fictions, sites, he suggests, of “becoming” rather than fixed destinations, if we are to imagine an ethics of global democracy that truly allows for equality and difference. By continually shuttling between location and dislocation, remembering and forgetting, Irish expatriate modernism, Pearson argues, begins to define the parameters of this new global ethics, offering an Irish cosmopolitan vision that accords with the actualities of migrant existence, rejects the false choice of “national” or “universal” categories of human identity, and revels in the fluid, nonhierarchical interplay of local and global modes of consciousness.

In this sense, Irish Cosmopolitanism reminds us that postcolonial theory is ultimately based upon a non-idealistic form of ecumenical humanitarianism. Pearson offers a smart and compelling approach to Irish expatriate modernism that prompts his audience to envision a genuinely global model of citizenship in our own age when, for the majority of the world’s inhabitants, migration is the norm, origin stories are perpetually invented and undone, and any notion of home or abroad is always mixed from the start. It is, in short, an important new book that will have a lasting impact on postcolonial Irish Studies.

[2] An early example of this type of approach may be referenced in Declan Kiberd’s Inventing Ireland (Cambridge, Mass: Harvard University Press), 1996.