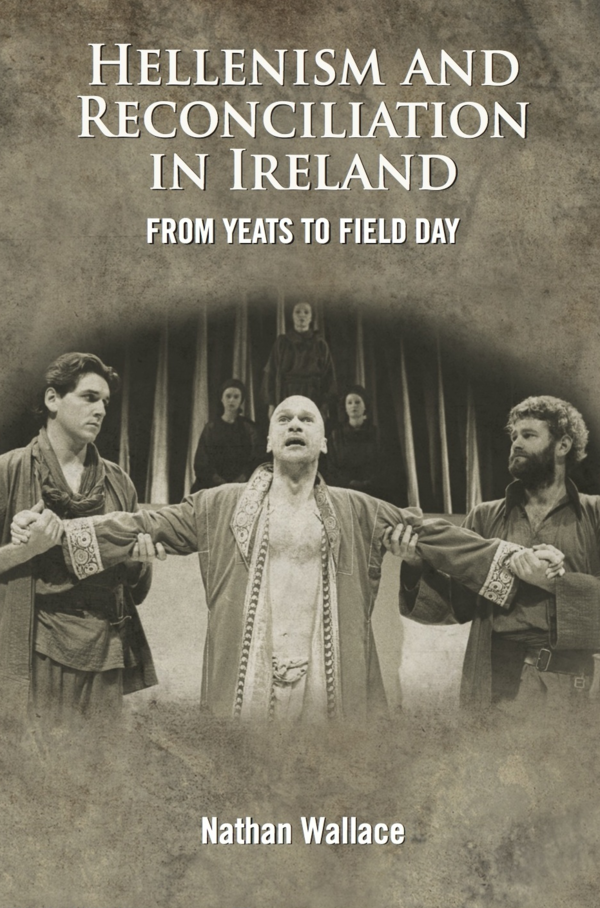 Nathan Wallace has written an original, perceptive book that links Hellenism and reconciliation in Ireland; it is also concise, with 132 pages of text.

The theme of reconciliation has become significant in a number of political situations. These include the Middle East, South Africa, and Columbia. In Northern Ireland, various forces—political, religious, community—aim to reconcile the nationalist and unionist groupings. Wallace explores several aspects of this seemingly intractable issue in W. B. Yeats, Conor Cruise O’Brien, Tom Paulin, and Seamus Heaney. Crucial here are the plays of Sophocles, notably Antigone and Philoctetes. Drama has a civic function in modern Ireland, as it had in fifth century Athens, suggesting for Heaney a positive note when, on occasion, “hope and history rhyme.”[1]

The theme of reconciliation relates to Northern Ireland, where two communities espouse separate ethnic and religious identities: a majority unionist and Protestant, a minority (two-fifths) nationalist and Catholic. Each community has its own version of history. The crucial issue is how to bring these divergent groups into some kind of equilibrium. The Good Friday Agreement of 1998 appears to achieve this, but the position remains precarious in the new century. Wallace posits the existence of an “icon of reconciliation” who acts as an ethical guide, namely Seamus Heaney (8).

For Wallace, the Field Day Company (partly based in Derry) explores cultural identity in a vital way. This is seen in Tom Paulin’s play The Riot Act, based on Sophocles’ tragedy Antigone, and with Heaney’s play The Cure at Troy, based on Sophocles’ tragicomedy Philoctetes. These two Irish works provide “cultural capital” by appropriating Greek drama to illuminate Irish conflict.

The Greeks were well-used to conflict (stasis) within cities, and saw it as a major threat. Thucydides (3.69-85) provides a classic account of this on the island of Corcyra (Corfu). Mutual savagery leads to a distortion of political language, a version of what is now termed “spin.” As George Orwell notes, such language “is designed to make lies sound truthful and murder respectable.”[2] In Corcyra, the Athenian general Nicostratus attempted “‘reconciliation’, but to no avail.” On the other hand, Irish involvement with Greek themes is, as Wallace shows, routed in serious appraisal of their world.

Some Greek “tragedies” end on a positive note, as in the case of Sophocles’ Philoctetes and Oedipus at Colonus. The Oresteia trilogy of Aeschylus brings to an end the violent vendetta in the House of Atreus. Some late plays of Euripides—Helen, Ion, and Iphigenia among the Tauri—anticipate the satisfactory conclusions of Greek New Comedy, just as Shakespeare in his late “romances” “turned out happy ever-afters.”[3]

Wallace provides a useful account of W. B. Yeats’ interest in Matthew Arnold’s Hellenism. This suited Yeats for a time. But Arnold usually indulged in a kind of vapid idealization of Greeks: “Hellenism for Arnold was not the experience or thought of ancient Greece, but a set of more or less traditional English humanist values.”[4]

Reconciliation for Arnold meant “inevitable Irish reconciliation to Britain.”[5] But Wallace notes that Yeats and John Millington Synge “would attain dominion over the rhetoric of reconciliation” (27). For Yeats, this involved privileging Irish ancient religion over English organicism, with Sophocles’ wood of the Furies in Oedipus at Colonus providing Greek precedent. For Synge, this involved turning Sophocles’ tragedy King Oedipus into the comedy of The Playboy of the Western World. Christy Mahon, who does not kill his father, who does not marry a mother-figure, is triumphant at the play’s end, and goes off with his father to some form of liberation.[6]

Wallace has an interesting chapter on Conor Cruise O’Brien, one of Ireland’s most significant politicians and intellectuals. O’Brien was always fascinated with the link between politics and art: most obviously when, for him, Yeats the great poet stands accused of fascism. O’Brien finds Greek drama to be “part of the political process” (qtd., 47). But these plays are very far from endorsing state ideology.

Having worked, controversially, for the United Nations in Katanga, O’Brien saw that organization as aiming at reconciliation between states, citing the close of Oresteia as an example. But this will not apply to Northern Ireland: “No tinkering will reconcile these irreconcilables” (qtd., 3). For O’Brien, the Greek analogue for the United Nations is the Delphic Oracle. But, panhellenic though it was, the Oracle failed to foresee Greek victory over the Persians, and often issued ambiguous utterances.

A very remarkable feature of contemporary Irish drama is the number of plays based on Greek tragedies: since 1978, there have been more than 30 in number.[7] Frank McGuinness, who has done four Greek plays, explains, “It seems to be happening through the English-speaking world that the Greeks are emerging as the dominant international force in our theatre.”[8] In Athens, in Ireland, these plays produce a distancing effect in regard to current events. In 431 B.C.E., Euripides’ Medea problematizes the position of Athenian women; in 1988, Brendan Kennelly’s expanded version problematizes the position of Irish women.

Arnold said in 1853 that “It is no longer possible that we feel a deep interest in the Antigone of Sophocles.”[9] Irish dramatists now feel otherwise: there have been six Irish Antigones in recent times. The basic clash in this tragedy is between Antigone, who wants to bury her brother Polyneices, and the King of Thebes, Creon, who forbids the burial of a traitor. Hegel famously claimed that both of them are right. But this is false. The blind prophet Tiresias—always a source of truth in Greek tragedy—establishes that the unwritten laws of the gods demand Polyneices’ burial. As Hugh Lloyd Jones, Regius Professor of Greek at Oxford, says, “Tiresias makes it clear that Creon has offended against the law of the gods.”[10]

Tom Paulin’s play The Riot Act is a version of Antigone that suggests Northern Ireland. Antigone becomes a republican, who says of her brother, “I must bury him,” and invokes athonic gods against Creon: “Down in the dark earth / there’s no law says / ‘Break with your own kind, go lick the state.’”[11] Creon, meanwhile, indulges in an egregious type of “spin.”[12] But he does eventually say of his view, “I changed it utterly”[13] (recalling Yeats on the Easter Rising: “All changed, changed utterly”).[14] But this attempt at reconciliation comes far too late. Three suicides end Antigone: those of Antigone, her fiancé Haemon, and his mother Eurydice. But as Wallace points out, Paulin’s general movement to a nationalist stance is balanced by an interest in Protestant nationalists such as Henry Joy McCracken (77-80).

Seamus Heaney wrote a version of Sophocles’ tragicomedy Philoctetes called The Cure at Troy (the title avoids the problem of how to pronounce Philoctetes). The Greek hero Philoctetes is currently marooned on the isolated island of Lemnos. But his miraculous bow, once owned by Hercules, is needed by the Greeks in order to capture Troy. It is for Odysseus and Neoptolemus to persuade Philoctetes to come to Troy. Believing that the end justifies the means, Odysseus gets Neoptolemus to trick Philoctetes into giving him the bow. The younger man then changes his mind, and seeks to restore the bow. Impasse remains, but, in Sophocles, this is resolved by Hercules as deus ex machina. But this is not what Heaney called “non-coerced reconciliation” (93).

Accordingly, Heaney alters how Hercules is understood. To do this, he employs as chorus three women (Philoctetes is the only Greek tragedy without a woman) to be viewed as Fates, at the play’s beginning and end. Intransigence is the theme at the beginning: “every one of them / convinced he’s in the right.”[15] At the end, Northern Ireland intrudes in the shape of a hunger strike and a police widow, followed by the famous phrase, “And hope and history rhyme,” often cited by politicians, and termed “bonuses” by Heaney.[16] What happens here is that the chorus channels not just Hercules’ words, but the voice of poetry itself, so as to allow “the drama to resolve itself within the internal zone of human psychology” (105).

A more explicit depiction of Irish people knowing Greek and applying this to Ireland’s history is found in Brian Friel’s play Translations. Britain’s aim in the Ordinance Survey of Ireland (1824-46) is to civilize the rude Irish. But the play shows that the Irish are well-versed in the common coin of civilized Europe, Greek and Latin. As seen in the hedge schools that teach those languages and their literatures, so Jimmy Jack can say, “Sure Homer knows it all, boy, Homer knows it all.”[17] And yet we need an antidote to all this, as provided by Louis MacNeice: “And how one can imagine oneself among them / I do not know; / It was all so unimaginably different / And all so long ago.”[18]

Wallace’s book comes at a time when the issue of reconciliation is significant in the world. We must remember again that a number of Greek plays end on a positive note, especially several of late Euripides’. Wallace well-analyzes how plays by Paulin and Heaney can intervene in the politics of Northern Ireland, as part of a wider appropriation of Greek tragedy exhibited by so many Irish writers today.