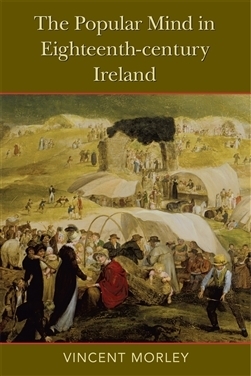 This book presents quotations from popular Irish texts that appeared between the late-seventeenth century and the early nineteenth century, along with commentaries and explanations, which are competently written and help the reader understand the context, meaning, and significance of the texts. Almost all the literature was composed in Irish, and Morley provides both the Irish version and an English translation. The texts usually consist of quotations of no more than a couple of paragraphs, but eight works are presented in full, seven of which have been translated for the first time. The discourse forms vary: songs, poems (including a good number of aislingí), and prose. Most have a political purpose, relating primarily to land confiscations, the Protestant hegemony, Catholic legal disabilities, agrarian agitation, and/or religion.

One can only be impressed with the wealth of textual material and with the detailed information that Morley is able to provide about the authors, their motivations, their geographical locations, and the issues and events that shaped their thinking. It is hard not to agree with his claim that the literature he is presenting has not been sufficiently sourced in the study of Irish history. His main argument is that, alongside the twists and turns of Irish political history, there was an overwhelming continuity of disaffection in the great majority of the population. This does not mean that these works did not change over time; indeed, one of Morley’s goals is to demonstrate how they changed as circumstances changed. But he does insist that these are adaptations to new realities (such as the decline of Jacobitism and the rise of republicanism) rather than major shifts in attitudes. If the English, Welsh, and Scottish were moving gradually toward regional cooperation and a common identity as a community of “Britons,” notions among the ruling elites of Ireland that it could be part of this process were totally unrealistic.

Not surprisingly, vernacular compositions, especially songs, were well-suited to communicate this underlying disaffection because such works were in the language of the majority of the population, and because sedition was more difficult for authorities to uncover and suppress when it was disseminated in Irish. All this is not to suggest that Irish Catholics were united in their views and oppositions. Morley’s sources exhibit noteworthy disagreement among authors, including a remarkable measure of anti-clericalism alongside the usual lamentations about the mistreatment of the Catholic clergy. This is only to be expected when Catholicism was not just a religious issue but a social and political issue as well, something that will surprise no one familiar with the history of Ireland, but which is well-evidenced in Morley’s sources.

This book has significance beyond Ireland. For some time now historians have been taking a greater interest in the role of non-elites in the intellectual movements emerging in Europe during the seventeenth and eighteenth centuries, including the French Enlightenment. The authors of Morley’s texts are likewise drawn from a broad range of socio-economic statuses: Catholic clergy, schoolteachers, farmers, cobblers, coopers, blacksmiths, tailors, publicans, stonemasons, and so forth. The contents of the book are also relevant for the study of Jacobitism, as Morley highlights the similarities and differences between Jacobitism in Ireland and Britain. Those who study the Counter-Reformation in Continental Europe would do well to read this book in order to expand their knowledge of the role of local lay populations in the resistance to Protestantism. It is also relevant to the current debate over the origins of nations, a debate that pits those who hold that the nation is a modern construction against those who believe that most nations have more long-standing social and cultural roots. And, of course, anyone interested in European popular culture will find this book rewarding.

As in Scotland, interest in conflicts in Continental Europe and personal links with Continental countries were also considerable in Ireland, but even more so. This was the case mainly for three reasons: first, no small number of Irish Catholics fled to France or Spain in the seventeenth century, and others left Ireland to serve in Continental armies; second, Jacobitism played a role in international relations in Western Europe and was even stronger in Ireland than it was in Scotland; and third, one of the continuities that Morley’s sources reveal is the persistent millenarian belief in Ireland that France or Spain would invade the island and restore Catholicism, recover confiscated land, and reverse the political domination of Protestants over Catholics. Popular references to Irish soldiers on the Continent and predictions of a rescuing Continental army abound in these discourses.

In sum, Morley’s text is a valuable publication. His decision not to reference secondary works by other Irish historians is regrettable, but his translations and commentaries will advance Irish historiography and serve as a resource to both scholars and the general public. This service will expose many researchers to literature that they would otherwise miss. Ironically, however, by providing translations of these and other works, Morley is undermining one of his objectives, that is, to persuade more historians of the need to learn Irish. Yet I think this a price that has to be paid not only to advance our understanding of early modern Ireland, but also to make a more general contribution to the understanding of early modern Europe.