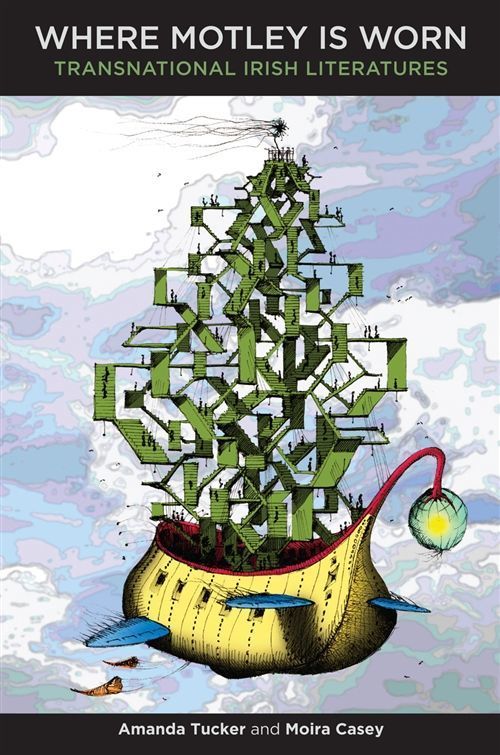 As early as 2001, Inderpal Grewel and Caren Kaplan were investigating what had become of the transnational idea they had promulgated six years earlier in Scattered Hegemonies: Postmodernism and Transnational Feminist Practices (1994). The term transnational had “become so ubiquitous in cultural, literary, and critical studies that much of its political valence seems to have become evacuated."[1] For Grewel and Caplan, the crucial aspect of transnational studies was its capacity to “address the asymmetries” of globalization;[2] to some extent, they mourned the apparent loss of transnational studies’ particular strength, its analysis of late capitalist, often post-colonial relations of power. However, they also acknowledged the ungovernable impulses of change in scholarship, of the inevitable evolution of critical ideas.

The editors of Where Motley Is Worn: Transnational Irish Literatures, Amanda Tucker and Moira E. Casey, have responded to this definitional query with a collection of essays conceived as “a complement and supplement [to] our understanding of ‘national literature’” (2). While the collection thus seems implicitly to acknowledge Grewel and Kaplan’s idea of the transnational in practice as “signal[ing] the demise or irrelevance of the nation-state” in a globalized world,[3] Tucker and Casey have in mind something slightly different: a “complement and supplement” implies something extra, leaving the original concept of nationalism intact. Where Motley Is Worn is also something of a compendium of the critical methodologies traced by Grewel and Kaplan in 2000, ranging from migration and diaspora studies, cultural studies, to post-colonial studies. This volume similarly extends the Green (and Black) Atlantic into a broad geographical swath of transnational consideration. Tucker and Casey take an approach similar to that used by Jahan Ramazani in A Transnational Poetics (2009), which analyzes “circuits of connection and dialogue across political and geographic borders and even hemispheres,…examining cross-cultural and cross-national exchanges, influences, and confluences."[4] Ramazani’s text and this one are interested in “a variety of transnational templates—globalization, migration, travel, genre, influence, modernity, decolonization, and diaspora."[5] But where Ramazani included a range of literatures in English, Tucker and Casey center specifically on the Irish nation-state. Analyzing texts that range from Maria Edgeworth’s Essay on Irish Bulls through and into the heart of Celtic Tiger representations, the collection is admirably quirky at points and full of gem-like insights.

The essays fall into three broad categories: those that focus on transnational influences on Irish literature (by far the largest category); those that compare Irish transnationalism with other versions; and those that chronicle Irish influences on other literatures. The essays by Amanda Tucker and Mary McGlynn discuss Latin American influences, in both nineteenth-century and Celtic Tiger incarnations. Tucker examines the Argentine gaucho tradition as seen through the lens of William Bulfin’s Tales of the Pampas (1900), published two years before he returned to Ireland from an eighteen-year residence in Argentina. Tucker argues a parallel between the gaucho figure in Argentine nationalism and the Gaelic Celt; linking these two identities is “possibly the most unique quality of Argentinean life—the contrachecho quality of being at war with oneself” (126). This link operates through Irish-Argentines like Bulfin via the comparable forms of Argentine indigenous nature (source of the gaucho) and Irish cultural nationalism (source of the idealized Gael) (129).

McGlynn argues for a similar trend in late twentieth-century and Celtic Tiger Irish literature, where “appropriations” of Latin American elements “reveal a sense of instability within a contemporary Irish society undergoing class reorganization” (45). McGlynn’s essay records a series of temporal inversions in Irish novels, where earlier writing utilizes contemporary transnational circumstances in their “critique[s of]...Ireland’s conservative past,” while Celtic Tiger writing is interested in Latin America’s past as a means for examination of the current moment. Both McGlynn and Tucker engage postcolonial ideas more fully than much of the rest of the collection, and both essays also acknowledge the negotiations of class within their transnational orbits.

Abby Palko’s historically grounded and historiographically subtle essay on Kate McCafferty’s Testimony of an Irish Slave Girl addresses the entwined histories of Ireland and the Caribbean, an intersection receiving notable attention in Irish Studies, paralleling Latin America’s increasing prominence. And like McGlynn, Palko acknowledges the struggles within Irish literature in its representations of race, its often “problematic attitudes about the construction of racial difference” (68). In this, Palko takes on concepts raised in the volume’s initial essay by Bisi Adigun, a Nigerian playwright now living and writing in Ireland. Adigun focuses on the questions at issue when rewriting Playboy of the Western World through a Nigerian lens. Where Palko dissects McCafferty’s text in specific detail, Adigun speaks more theoretically and provocatively about the differences between adapting African drama in Ireland and revising Irish drama as an African. If Adigun’s essay leaves many of its own questions unanswered, there is something refreshingly deviant, in the best sense of that word, about having a literary artist open this otherwise conventionally scholarly discussion of transnationalism.

To say the contributions by Ed Madden, Kelli Maloy, and Sonja Lawrenson represent the volume’s most conventional scholarly readings is not a slight. I mean by conventional that they take on familiar authors (Frank McGuinness, Julia O’Faolain, Edgeworth); but each of these essays teases out the unfamiliar. Madden’s piece on Irish gay poetry, which examines Cathal Ó Searcaigh and Padraig Rooney’s work in addition to McGuinness’s, initially seems to stretch the transnational uncomfortably by referring to poems based largely in Irish and Anglo-Irish relations. However, the clear, cogent, and well-argued essay persuasively grounds this work in transnational experience. “Irish gay poetry,” he claims, “like much of Irish lesbian and gay literature, especially before decrminalisation—is almost inevitably transcultural in reference and transnational in scope” (85). According to Madden, being gay in Ireland, and being able to express gayness in Irish poetry, is predicated on transnationalism.

Maloy notes how O’Faolain’s Three Lovers posits “limits of cosmopolitanism as an antidote to provincialism” (119) and thus articulates an explanation of the limits of the Irish bildungsroman. Cosmopolitanism leaves intact the contours of nation. However, transnationalism, in the sense of Ulrich Beck’s “social spaces,” rather than cosmopolitanism, appears to offer the possibility of “existing outside the purview of the national narrative…and, more directly, correct[ing] some aspect of Irishness” in The Three Lovers (103). In the end, though, transnationalism fails O’Faolain’s characters.

Katarzyna Bartoszynska’s observations about nineteenth-century comparisons between Irish and Polish literature and history similarly engages the distinctions between transnationalism and cosmopolitanism. But Bartoszynska’s comparative model proves more fruitful than O’Faolain’s. It allows us to reread Lady Morgan’s Wild Irish Girl as methodically contesting the critical divide between the genres of romance and realism. In doing so, the essay reminds us that, in analyzing culture, criticism tends to cycle through the polarities of national exceptionalism and cosmopolitanism/internationalism. Transnational studies, at its best, seeks to integrate both trends, to maneuver the shoals of local particularity and globalized abstraction in a deep, rich comparative model that attends to global history and movement.

The last two pieces—Sonja Lawrenson’s on Edgeworth’s Essay on Irish Bulls and Andrew Kincaid’s on piracy fiction—locate the transnational in seemingly familiar, seemingly well-trammeled, chronologically linked historical circumstances: imperial India and the Act of Union. In the “Little Dominick” section of Irish Bulls (published just after the Union), Lawrenson reads “obscure allusions to Indian cultural practices” as a cipher for “facilitat[ing]…Irish political acquisition” (175). While conceding the subtle nature of the essay’s transnational references and implications, Lawrenson emphasizes the critical importance of the essay’s “destabilizing…minor transnationalism” (169). Kincaid similarly acknowledges the marginal nature of piracy literature, with its inherent transnationalism, in Ireland after the Union, the image of the pirate being found in works “beyond the Irish canon” (185). In his reading, piracy in Irish popular literature is a synecdoche for the desire to “supersede” the Union (198). That this desire plays out outside the canon indicates the ambivalence of the desire. For both Lawrenson and Kincaid, then, nineteenth-century Irish transnationalism registers as a form of disturbance rather than transformation.

In fact, the implicit (and sometimes explicit) concern in all the essays in the collection is the extent of the political import, the social and critical power, of transnationalism—the issue raised by Grewel and Caplan in 2001. It makes sense, then, that the volume takes its title from Yeats’s “Easter 1916,” that paean to the Irish (r)evolutionary moment celebrated this past centennial year. Yeats’s pre-rebellion notion of ordinary Irishness as a fool-like patchwork (of what, exactly?) gives way to a sense of something substantial, wondrous, and dangerous: once “certain that they and I / But lived where motley is worn,” now “All changed, changed utterly / A terrible beauty is born.” This volume suggests that a similar critical vacillation between reading 1916 as vigorously transformative (as Yeats’s poem does) and mildly, if crucially, transitional continues to mark transnational study. The texts at issue here document the transformation of that richly domestic patchwork into a densely textured global fabric.