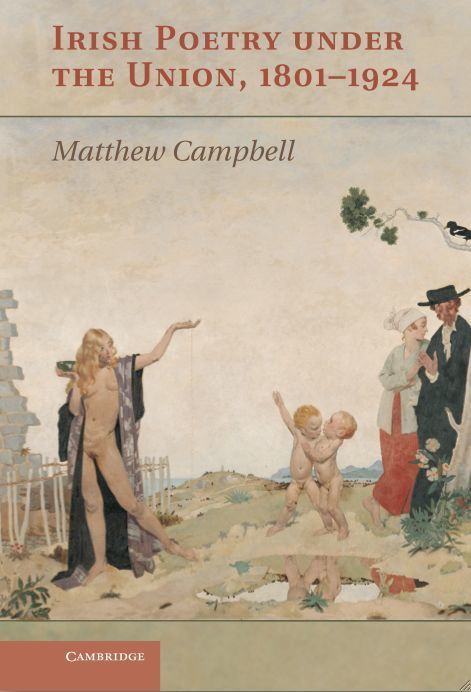 Given his proclivity for sermonizing on all other conceivable subjects, it is no surprise that Stephen Dedalus should have had strong views on prosody too. In Stephen Hero, he treats us to a mini-tutorial in scanning a Byron quatrain:

In one of the great might-have-beens of literary history, the English Jesuit who prompts Stephen to a parsing of the cultural semiotics of “Christ, ale, master” could have been the impresario of sprung rhythm, Gerard Manley Hopkins, had that unfortunate poet-priest eked out his unhappy Irish exile for another ten years. Stephen and Hopkins would have had much to discuss, and while Joyce is a minor presence in Matthew Campbell’s Irish Poetry Under the Union, the topic of scansion is pursued with forensic rigour throughout. Much more is at stake than a stray spondee here or an amphibrach there, however, and cumulatively over its eight chapters Campbell’s study builds to one of the most satisfying contemporary accounts of the Irish nineteenth century.

Stephen’s scanning of Byron is not without eccentricities, but consensus has often been hard to come by when an Irish ear listens to verse in English. Austin Ticklepenny, dipsomaniac “pot-poet” of Samuel Beckett’s Murphy, specializes in pentameters “as free as a canary in the fifth foot,”[2] and turn-of-the-century theorists such as William Larminie and Thomas McDonagh (mentor of Ticklepenny’s real-life model, Austin Clarke) theorized anxiously on the “Irish mode,”[3] that Anglophone strait gate through which the unruly energies of the Irish language would pass unscathed. A mandatory reference point for these debates is Samuel Ferguson’s thundering 1831 review of Hardiman’s Irish Minstrelsy, in which the proto-Arnoldian Ferguson attempts to restore the honour of Gaelic Ireland, so crassly traduced by Hardiman and other versifiers twanging the harp of old Ireland for the moistening eyes of London drawing rooms. The postcolonial orthodoxy has long been to see the accommodation of Irish subject matter to Anglophone verse forms as subject to the coercive logic of Arnoldian reconciliation, but a subtler and more variegated picture than this emerges from Campbell’s book. It is bracing, for instance, to see Campbell dissent from the almost-obligatory terminology of hybridity—a category grounded in biological determinism but chiefly of interest to critics in the business of discrediting essentialist underpinnings. A striking metaphor of generation occurs in a chapter on Thomas Moore and Francis Mahony, with the Cork poet describing his alter ego Father Prout as a “speck on the horizon—a small seminal principle, rather than a formal body” (52). When Beckett’s Unnamable dreams of being an ill-fated sperm (“some people are lucky, born of a wet dream, and dead before morning”),[4] he is theatrically opting out of the metaphors of generation and lineage on which so much Irish writing depends, and Campbell expertly traces the myriad ways in which poetry from this period brings the self to less than perfect fruition. James Clarence Mangan’s “mannerism” and ventriloquial “antithesis of plagiarism” for instance, subject of an incisive chapter, doom the self to “obscurity and oblivion” while making “obliviousness of self” a defining condition of the poetry (102).

Campbell savors the irony, given Ferguson’s Unionist politics, whereby that poet condemns Hardiman’s project for its adulteration of Gaelic essence and patronizing belief in the “Saxonisation” of the Irish poem (80). Yet it seems no less wrong to align Ferguson with an aesthetic of impurity, adulteration and parody, as critics such as David Lloyd have tended to do with Mangan. For Campbell, Ferguson requires nothing less than a “pre-hybrid feudal state” of Gaelic identity to fly the traps of Victorian identity politics—not the easiest thing to come by, in the pages of the Dublin University Magazine or anywhere else (80). An amusing countercurrent to these debates, once again serving to “green” Ferguson’s position, is provided by the pronouncements on Irish matters by Tennyson and Swinburne. Dominant partner though he is in the English-Irish dyad, what is the Saxon really? “Saxon or Dane or Norman we, /Teuton or Celt or whatever we be,” Tennyson wrote in a poem on the Prince of Wales’s marriage to Princess of Alexandra of Denmark in 1863[5]. For Tennyson, Celtic otherness is already a constituent part of Saxon identity (the Unionist equivalent, perhaps, of D. P. Moran’s maxim that “the Gael must be the element that absorbs”).[6] “The Voyage of Maeldune” is a piece of unadulterated (which is to say, very adulterated indeed) Victorian kitsch, but with its loping Irish-inflected hexameters, Campbell sees clear affinities with the Yeats of the 1890s.

Though keen to hitch a ride on the Celticizing Victorian bandwagon, Yeats was canny enough not to trumpet his common ground with the diehard Tory poet laureate. One way of getting the England-Ireland relationship more accurately in focus is to triangulate via Scotland, and in his opening chapter on “The Synthetic Irish Thing” Campbell harks back to Scott’s Minstrelsy of the Scottish Border and Macpherson’s Ossianic impostures. In his recent anthology of Early Irish poems in translation, The Finest Music, Maurice Riordan draws a striking connection between early Yeats and Macpherson. Unlucky enough to find himself in Dr Johnson’s cross-hairs, Macpherson suffered exposure as a fraud, but (Riordan argues) his synthesizing of disparate oral material against a backdrop of Celtic mood music has significant overlaps with early Yeats. Nor is there any reason to stop there: a thorough-going application of the Macpherson test to the authors of Irish Poetry Under the Union would leave few poets standing.

I have mentioned Mangan, whose flight into parody as default-mode is a reaction to the ethnic-nationalist template that becomes his lot as the poet of Young Ireland. Critics before Campbell have pointed out the element of distortion involved in nationalist canonisation of Mangan, one manifestation of which has been a reluctance to allow him any affinities to British Romanticism; but Campbell’s chapter here is strong on close readings, bringing this still largely unknown oeuvre wonderfully to life.

A chapter on Hopkins, Yeats, and “the Unravelling of British Poetry” (157-183) begins with some absorbing material on Hopkins visiting John Butler Yeats’s studio (he was not much taken with JBY’s art) and publishing accounts in Nature magazine of volcanic dust in the skies over Dublin, courtesy of the Krakatoa volcanic eruption in 1883. Even erupting volcanoes can hardly match the Hopkins of “Spelt from Sibyl’s Leaves” for unusual evening skies, however. For Campbell, this is not just a poem set in Ireland but an Irish poem, and one whose sense of alienation is rather different from that endured by Philip Larkin in Belfast seventy years later. Larkin felt that “strangeness made sense” in Belfast since Ireland “was not home.”[7] For Hopkins, who was horrified by the Home Rule sentiments of his fellow Jesuits, Ireland was, or should have been Britannic home soil, part of the “Commonweal” invoked in “Tom’s Garland” (175). In the end, Hopkins argued himself into something like grudging acceptance of the logic of Home Rule, and the conclusion of “Spelt from Sibyl’s Leaves” (surely one of his greatest poems) enacts a similarly tortuous journey towards reconciliation, where “thóughts agaínst thoughts in groans grínd” (182).

A final chapter on “Yeats After Union” makes much of the “throughther” (Hopkins word; 188) quality of poetry emerging from cultural disintegration and moving “into the end of light and the end of union and empire ” (188). While an early poem such as “To Ireland in the Coming Times” is full of hopes for the future, it has yet to enact this future with the passionate immediacy of the poems still to come. The missing stimulant required by Yeats’s imagination is violence, or if not actual violence, then the violence of the imagination pushing more urgently back against a hostile world. “Perhaps, /The man-hero is not the exceptional monster,” wrote Wallace Stevens, “But he that of repetition is most master.”[8] Rituals of repetition are what drive “Easter, 1916,” after all, but in both Stevens and Yeats, repetition allows us to discover differences as well as sameness. Campbell closes with the example of “The Lamentation of the Old Pensioner,” as revised in old age by Yeats from its 1890 original. The close of the poem brings transfiguration, but of the most lacerating kind: “I spit into the face of Time /That has transfigured me.”[9]

Irish Poetry Under the Union does anything but slouch its way to a conclusion, but some rough beast is waiting to be born by its end, as the long nineteenth century is buried at last. Campbell has one of the finest ears of any contemporary critic, and when he is finished with the nineteenth century, it has been comprehensively scanned. I was particularly glad of his attention to Francis Mahony, that Leeside Manganesque zany, and all the sorrier, given Campbell’s generous attention to lesser-known figures, that no reference is made to James Henry. I wasn’t sure what Campbell meant by a reference to texts being printed “in Irish typeface” (10) in Ó Tuama and Kinsella’s An Duanaire, as the only texts in insular script in that book are a few manuscripts reproduced in the illustrations. Nonetheless, this is a marvellously rewarding book, sceptical of current orthodoxies, and staking its case on the incisive, engaged, and witty close readings that set off its arguments so persuasively.