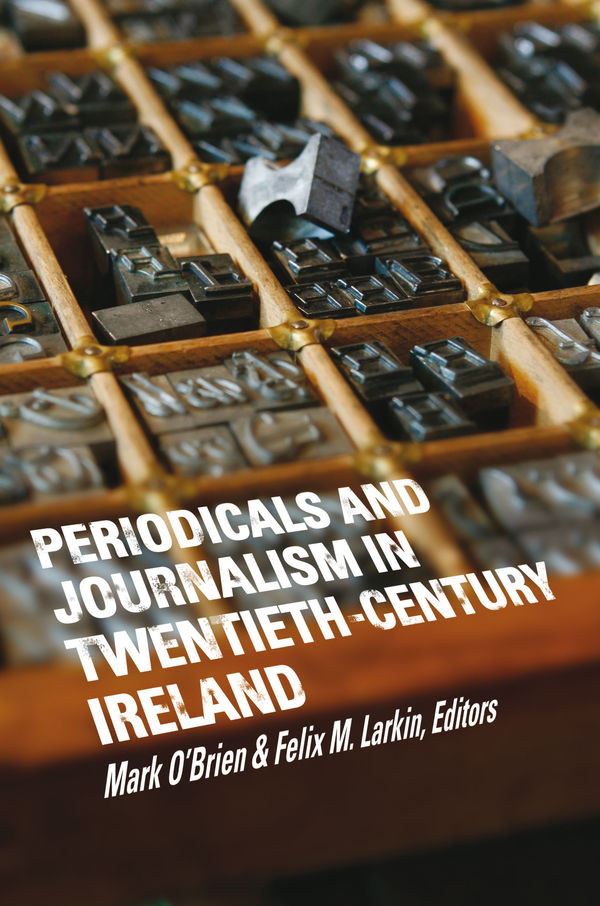 Why publish Periodicals and Newspapers in Twentieth Century Ireland: Writing Against the Grain, a book about the history of journalism in Ireland? Why publish it now? These are the two questions that need to be addressed before assessing the content of this edited collection. In answering the first question, we should perhaps consider the state of journalism in Western Europe, a region swamped with accounts of the “crisis of journalism;” the irresistible march of technology; and the decline of the role of the journalist when faced with competitor communicators. Such accounts, however, miss the central point that, at heart, all of these debates are political/cultural debates. People who consume, produce, and publicly mediated discussions of news have always had the desire to engage with the “stuff” of journalism, whatever its technological or commercial drivers. For this reason, we need a history of journalism in Ireland. Ireland’s political and cultural histories are not arrested in time but are living, morphing consequences of the past. And why do we need such a historical account now? The trend for history to be eased out of techno-determinist discussions, as if the Internet had forced us up to some Stunde Null of public communication, needs to be argued against at all costs if we are to understand the present and indeed the future of our communicative spheres. This is my interpretation of “Writing Against the Grain,” the subtitle of the book, as it attempts to swim against this contemporary tide, to write as the journalists of the previous century did.

At its best, journalism history should tell us as much about the society and politics of a country as it does about the characters and content of the press. Felix Larkin's and Mark O’Brien's volume certainly matches those criteria. Moreover, in concentrating on periodicals—weekly, fortnightly, monthly, and in one case, annual publications, the editors have steered clear of a daily press that may not have been as consistently dynamic or creative in contributing to the political and cultural space of twentieth-century Ireland as its periodical complements. In journalistic terms this allows the editors to search for contributors to the “cultural republic” of Ireland, demonstrating that, just as in other national environments, the periodical—released from the need to produce a daily diet of news and from the oppressive demands of market and politicians—is often where journalism has produces its most dynamic variants.

Larkin and O’Brien have previously generated discussions about journalism, having been founders in 2008 of the Newspaper and Periodical History Forum of Ireland, which has sought to harness the quite extraordinary scholarly energy in Ireland around journalism history. Its annual conferences have produced a constant strain of intellectual and historical explorations of journalism in Ireland, culminating in publications such as this book.

The national context of this edited collection is particularly compelling. The formation of modern nations is always a complex process of imagination and political construction, grafted upon more continuous and long-standing aspects of identification. Ireland is certainly no exception to this pattern, and the chapters here provide a rich account of how the modern republic shaped itself around discussions of Celtic heritage, the role of the Catholic Church, and relationships both colonial and post-colonial with Britain and the United States. The book charts the complexity of this dialogic and sometimes contradictory set of debates across publications that were founded and impacted upon awareness of Ireland as it approached the Anglo-Irish treaty of 1922. The book thus enables us to explore the wide variety of public intellectualisms that contributed to the crystalizing of many of the defining parameters of modern Ireland through these publications—in their aggressive advocacy of a range of Irish political identities and in the contribution to this identification of a specifically Irish women’s suffrage movement. As Ireland began to emerge from its long domination by Britain, the subtleties of the Catholic Church’s evolution as part of this process are not neglected and nor is the foundation of the investigative and anti-dogmatic traditions that formed the precursors to contemporary Irish journalistic culture. The book finishes with three periodicals that provide a more assertive engagement with the radical social and political impulses of the 1970s and 1980s.

Each of the chapters delivers a rich contextualization of the social and educational backgrounds of editors and contributors as well as the commercial and political affiliations of the periodicals themselves. In terms of context, there are also sufficient extracts from the journals to enable the reader to form a clear view of the appeal of the periodicals selected in shaping the Irish nation. Larkin’s chapter, for instance, demonstrates that a greater inclusion of illustrations and even facsimiles of the publications themselves could have identified more evenly their particular visual appeal.

The rich footnotes included in the collection indicate the amount of fresh literature and archival opportunity opening up for research in this field. There is certainly a large scope offered within the wealth of material available to scholars of Irish journalism for a longer, narrative history of journalism in Ireland and even a dictionary of Irish journalism in the nineteenth and twentieth centuries to act as a research complement to the work of all the scholars and authors associated with the NPHFI. These editors still have much scope for further labor!

One minor quibble on the editorial shape of the project concerns the lack of a more delineated structure of the chapters overall. The themes within the chapters could have been brought to the fore more prominently and perhaps contributed to a more coherent overall argument in the book with more consistently themed conclusions. This might have enabled the book to round off with an editorialized conclusion that draws these strands together. As it stands the book does not ultimately lay down its findings in a definitive conclusion.

In the late-nineteenth century Britain and Ireland, there were vigorous debates about the role and identity of the journalist, the function of journalism within democracy, the role of women within political and social structures, and most significantly perhaps, the threats and challenges of new technologies on political and cultural communication through the press. In an era that shares all of these concerns, and more, it is vital that we continue to explore—as this collection does—the distinctive contribution that Irish periodicals made to public debates as they formed the national space that confronted a different set of demands than those contended with today. Altogether, we must rekindle the effort to define and understand the scope of public debate as it engages with the cultural and political contexts of contemporary Ireland.