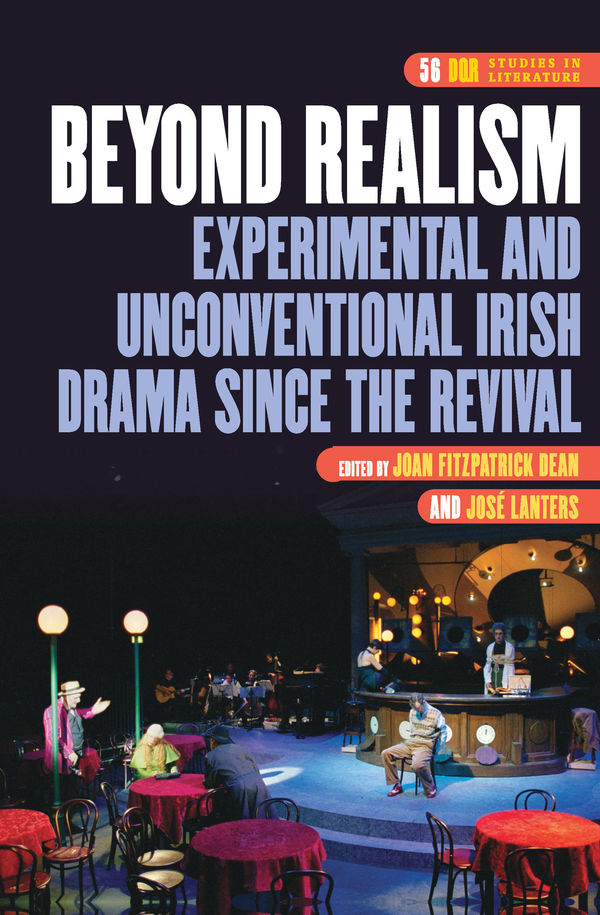 The lively pronouncement that “realism is for people with no imagination” (187) is referenced by Charlotte J. Headrick in her contribution to this collection, and that epigram frames the arguments and discussions of all of the authors gathered here. Headrick’s essay addresses the marginalization of Irish women playwrights in contemporary theater, and she argues how episodic, non-linear plays by women often demand innovative staging solutions that are at odds with the formality of theater space and of the “well-made play” (1, 171). What this collection of essays does, however, is to position Headrick’s narrow examination on gender as a determinant within a much broader cultural context of Irish theater historiography and performance histories. Headrick’s essay crystallizes issues of “performability” that she locates within a frame of space and gender, but in fact all of the contributors to this book (although many of them do not specifically address issues of production) are concerned with the “unperformable” play.

“Unperformability” is the production challenge posed by unconventional writing for the stage: for example the use of memory and flashback, episodic and non-linear narrative, surrealism, puppetry, dance, audio, and cinematic techniques. What these essays construct is an alternative, though concurrent, theater historiography to the dominant literary dramatic canon of Irish theater based on just such “unperformable” plays. Indeed, some of the writers under consideration, J. M. Synge, Sean O’Casey, and Thomas Kilroy, sit within both categories, while others, Denis Johnston and George Fitzmaurice, have lost their status some time ago.

The essays are ordered chronologically, rather than thematically, and this makes sense, as each essay consolidates this alternative historiography. The reader begins to see connections between writers, between purpose and intent, as well as in shaping a context for their readings within a broader European experimental perspective. Some of the analyses offered here are unconventional readings of standard texts, such as Synge’s Riders to the Sea, where Christopher Collins considers the play as a fantastic, magical realist narrative. By doing so, he connects Synge to the rich supernatural fantasy tradition of 19th-century Irish literature (for example, the work of Sheridan Le Fanu), but also to Frazer’s Golden Bough and to Symbolist theater. Fiona Brennan’s essay on Fitzmaurice places his work more firmly in the space of avant-garde experimentation and astutely notes the influence of cinema, music hall, and vaudeville on Fitzmaurice’s storytelling technique. Brennan identifies how popular culture explains the modes of address, the asides, the comic interludes, and the scenic innovations that appear in Fitzmaurice’s work and is probably correct when she argues that it is these very influences that have sidelined Fitzmaurice’s work within Irish theater history.

The influence of popular culture, particularly cinema, is also an important factor in Johnston’s work. Technologies of cinema, especially lighting, were crucial to the staging of Johnston’s plays (Johnston was also a director). Johnston’s play The Old Lady Says No! (1929) is well considered in Ondrej Pilny’s essay, in which he also examines The Dreaming Dust (1940), Johnston’s play about Jonathan Swift. Johnston is on record as welcoming cinema as an art form, arguing in the 1930s that cinema would release theater from the need for realism, as cinema during this period was closer to the staid realism that we now associate with television.

The playfulness and facility with different media such as radio and cinema is not often discussed in relation to its influence on the stage; we tend to think that because the stage came first, it was not influenced by newer technologies. Yet a number of the plays and playwrights discussed here owe much to experiments with theatrical form that incorporated the influence of emergent art forms (Johnston’s plays included). O’Casey’s Cock-A-Doodle-Dandy (1949) and The Silver Tassie (1928) are cases in point, and both are discussed here. Michael Pierse argues how The Silver Tassie’s expressionistic quality is considered either problematic or “uncharacteristic” in comparison to his earlier tenement plays. Pierse suggests that the failure to consider Tassie in relation to O’Casey’s later work renders that play meaningless and isolates it as an aberration rather than a departure in style. O’Casey’s later experimental output, such as Within the Gates (1932) and Cock-A-Doodle-Dandy has, Pierse argues, been sidelined, historiographically and performatively, rather than being considered as attempts to create a gesamtkunstwerk incorporating dance, costume, lighting, music, clowning, and spectacle, in the form of a giant rooster, as a counterpoint to formal, and arguably conservative, staging. Alexandra Poulain’s essay on O’Casey also argues that structural and formal discontinuity is intrinsic to his aesthetic project.

Akiko Satake’s analysis of Jack Yeats’ In Sand (1949) examines how Yeats moves through generational time and telescopes the bird’s eye view into narrative form. Satake speculates that Yeats’ fluid style of storytelling may have been influenced by his interest in expressionist painting, but it is more likely to have been informed by his work as a graphic artist. Yeats’ quick, urgent storytelling has more in common with the form of the comic strip artist: an art in which he was well-practiced. The plot and character-driven nature of the comic strip with its multiple points of view, different perspectives, and cosmic time scale is readily aligned with the poetic, anti-realist style of his playscript. Ian Walsh’s study of Donagh McDonagh’s long neglected 1947 radio play, Happy as Larry, again points to the hierarchy of literary judgment when considering a work’s merit, rather than the boldness of its staging demands. Walsh indicates how the play builds in a number of theatrical devices and contextualizes McDonagh’s knowledge of European experimental theater through his work with the Lyric Theatre and his knowledge of dance and cinema.

What is clear from reading through this book is that plays are written to be performed and, when the conditions of their writing make it difficult for them to be realized and staged, they tend to be forgotten about. The “unperformed” constitutes a delightful ghost canon: one that is subversive, chaotic, playful, and experimental. Peter O’Rourke’s examination of the works of Kilroy neatly ties together many of the aims of the editors. Kilroy’s work is properly contextualized through the readings offered in the earlier chapters and a clearer picture of Kilroy’s importance as an experimental playwright enables us to locate him within Irish experiments with the European avant-garde and on to more contemporary, political concerns with gender, the body, history, and space. Kilroy’s importance to Irish theater cannot be overstated. The playfulness of historical narrative and the appropriation of the popular forms of music hall and cabaret are further addressed in Clare Wallace’s analysis of Arthur Riordan and Bell Helicopter’s Improbable Frequency (2005), whose popular cultural references and playful staging devices echo those of Boucciault.

Reading this collection of essays made me think also about a continuum where Beckett sits more easily within an alternative canon of Irish theater history. Beckett is often considered to be a European modernist, rather than a specifically Irish, writer who is at odds within the dominance of Irish dramatic realism. Yet here that faintly traced lineage may be discerned though the various analyses and discussions offered of the difficult or “uncharacteristic” play. It is a line that links Boucciault to Synge to Fitzmaurice to Johnston to O’Casey and on to Kilroy, Vincent Woods, and Enda Walsh, and one in which experiments with puppetry, dance, audio, verse, surrealism, and ritual may easily be placed.

This volume is a most thought-provoking collection of essays that challenge Irish theater historiographies and point to the opportunities for scholarship on Irish performance and production history. Almost all of the plays discussed in this collection reference the uneasy relationship between experiment and realization and, by doing so, create an alternative, rich canon of unperformed plays.