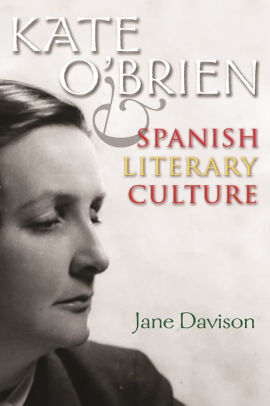 Although a thoroughly Irish writer, Kate O’Brien looked far beyond the island in her writings. In a 1947 RTÊ interview, she disavowed the existence of a specifically Irish novelist, stating that regardless whether “you are Irish or any other race…. You have to write for the world and take your chance.”[1] O’Brien, who was born in 1897 in Limerick, definitely took her chance, publishing nine novels, two biographies, and two travelogues, as well as diaries, journals, short stories, and journalism over the course of her fifty-year literary career. She achieved a modicum of critical and commercial success but, unlike her male contemporaries and fellow expatriates William Butler Yeats, James Joyce, and Samuel Beckett, who are generally regarded as the luminaries of Irish letters of the first half of the 20th century, O’Brien’s reception has been more mixed. This is especially true in Ireland, despite the fact she set almost all of her works in her native land. Part of the reason for this mixed reception is due the very strict Irish censorship regulations at the time she was writing. Two of her novels—Mary Lavelle (1936) and Land of Spices (1941)—were banned for obscenity by Taoiseach Éamon de Valera’s government and, at the time of her death in 1974, almost all of her books were out of print. While O’Brien enjoyed a resurgence in the 1980s and 90s, much early scholarship unfavorably compared her work to better-known male contemporaries and attempted to pigeon-hole her writing into a single historical, realist, or romantic framework. As a result, the multi-genre quality of O’Brien’s work, its progressive feminist and queer undercurrents, often subtle experimentation, and rich exchange with international literary currents, especially those from Spain, went largely unacknowledged for many years.

More recently, this lack of critical acclaim appears to be reversing. O’Brien was centrally featured in a 2015 Irish Times celebration of Irish women writers. Frank McNally, for instance, praised both her “transcendent imagination” and her cunning wit that she directed at the Catholic bourgeois society she was born into.[2] A recent spate of scholarly articles, including the May 2018 special issue of the Irish University Review, explore everything from O’Brien’s queer sensibility to her censorship and her ongoing intertextual conversations with Joyce. However, it is the people, culture, and, most importantly, the literature of Spain that arguably had the most profound and least critically understood impact on O’Brien and her writing. In an insightful contribution to this ongoing critical reappraisal, Jane Davison’s Kate O’Brien & Spanish Literary Culture assesses her engagement with Jacinto Benavente, Miguel de Cervantes, and St. Teresa of Avila. The author shows how these Spanish writers provided O’Brien with “an at times oblique way of resisting and subverting the Catholic and conservative social and cultural imperatives of the Irish Free State” (1). Davison convincingly argues that through sustained interaction with these authors, O’Brien covertly combatted the provincialism of de Valera’s Ireland, especially in regard to gender, sexuality, and anti-authoritarian aesthetics. Furthermore, like the American and British artists and writers who flocked to the freedom of Paris in the teens and twenties, Spain and its literature fed O’Brien’s imagination, offering key models of female agency that provided her with strategies and frameworks through which to “express a nonnormative sexual identity that was impossible in Ireland and invent a liberal version of Catholicism in her novels where individual conscience and personal choice on moral concerns were possible” (6).

As O’Brien notes in her travelogue Farewell Spain (1937), she first began to write while working as a governess in Bilbao, Spain during the winter of 1922-3.  Although O’Brien only remained in Spain for less than a year, precipitously returning home to enter into a short-lived marriage to the Dutch journalist Gustaaf Renier, she spent summers, from 1932 until the outbreak of the Spanish Civil War in 1936, exploring the northwestern part of the Iberian Peninsula. These travels provided key details for her two novels set in Spain—Mary Lavelle, which is loosely based on O’Brien’s time as a governess, and That Lady (1946), which centers on the power struggles between 16th century historical figures King Philip II and the famous rebel with an eyepatch, Ana de Mendoza, Princess of Eboli. O’Brien’s explorations also provided material for the travelogue Farewell Spain, the only one of her works to discuss Benavente, Cervantes, and St. Teresa together.

Building on book-length studies by Lorna Reynolds, Eibhear Walshe, and, most recently, by Aintzane Legarreta Mentxaka, Davison’s work is the first to explore O’Brien’s textual interactions with Benavente, Cervantes, and St. Teresa in a detailed and sustained way across multiple fictional works. Chapter 1 focuses on Benavente, a prolific playwright of the European-leaning Generation of 1898, whose plays—like almost of all of O’Brien’s oeuvre—critiqued the manners and hypocrisies of the Catholic middle class yet assiduously avoided didacticism. He was awarded the Nobel Prize in 1922, a decision that, as O’Brien relates in Farewell Spain, spurred her to read his work during her first visit to the country. Drawing on Benavente’s El hombrecito and Princesa Bebé, which detail the struggles of middle class women to gain autonomy over their lives and their bodies, Davison shows how both O’Brien’s first novel, Without My Cloak (1931) and her seventh, That Lady, take up the key Benavente themes of marriage, family, and morality as well as the conflict between duty and desire. In Without My Cloak, O’Brien uses Benavente’s Nene and Princess Helena as models for both the rebellious but ultimately dutiful wife Caroline and the spoiled and naïve Dennis. As Davison details, through these characters “O’Brien ignites the sparks of rebellion that will grow in her later novel That Lady into a fully-fledged personal revolt” (45). Detracting from these illuminating claims is Davison’s tendency to get caught up in tangents that distract from her main arguments, such as asserting without clear proof that O’Brien toured Spain and engaged in a romantic relationship with author and Oxford lecturer Enid Starkie, the sister of Walter Starkie who wrote the first literary appraisal of Jacinto Benavente’s work in English.

Traveling backward in time, Chapter 2 examines the influence of Cervantes’s Don Quixote, on O’Brien’s writing style in Without My Cloak, Mary Lavelle, and Pray for the Wanderer (1938). Davison aptly connects 17th century Inquisitorial Spain with post-1937 Constitution Ireland as worlds that “were fundamentally hostile to artists and their work” (75). She argues that, like Cervantes, O’Brien indirectly expressed dissent with the accepted norms of the time through irony and subtle hints. This strategy helped O’Brien’s fourth novel, Pray for the Wanderer (1938) evade de Valera’s censorship despite the banning of Mary Lavelle a year earlier. Davison also details O’Brien’s use of “quixotic” characters such as Don Pablo and Agatha Conlon in Mary Lavelle and Nell Mahoney in Pray for the Wanderer, often fusing traditional and modern traits within the same character to avoid clear identification with the progressive feminist, individualistic, and anti-authoritarian views espoused by the characters. What is less effective is Davison’s insistence that O’Brien was also influenced in both her physical and emotional depiction of these characters by Gustave Dore’s illustrations to Don Quixote that were first published in 1863 but later became standard.

In her final chapter, Davison asserts that O’Brien appropriated St. Teresa of Avila, the subject of her eponymous 1951 monograph, “as both a lesbian icon and a model for avant-garde feminist writing” (27). Moreover, she argues that O’Brien’s interest in the Spanish saint’s writings did not develop after her travels in Spain as generally held but that “an engagement with Teresa of Avila’s writings profoundly shaped O’Brien’s approach to all her major works after The Ante Room” (1931) and were, in total, “the most significant influence on O’Brien’s aesthetic” (28). Davison explores how O’Brien created a rhetorical strategy that owed much to the saint’s methods of subversion in her own writings. This, in turn, centrally inflected O’Brien’s depiction of her female characters’ sexuality and independence in Mary Lavelle, The Land of Spices (1941), The Flower of May (1953), and As Music and Splendour (1956).

Davison’s Kate O’Brien & Spanish Literary Culture grew out of her 2014 doctoral thesis at the University of Liverpool and draws primarily on a range of previously unpublished O’Brien material held at the Glucksman Archive at the University of Limerick. While the lack of theoretical grounding and sustained engagement with the larger fields of feminist modernism and Irish studies is at times surprising, Davison’s agile close readings and innovative perspectives make this study a valuable addition to the growing critical reassessment of O’Brien’s work. The author makes a strong case that O’Brien was not only a ground-breaking Irish novelist but, as she herself wanted to be known, a novelist of the world who was unafraid to take chances and break through feminine stereotypes.