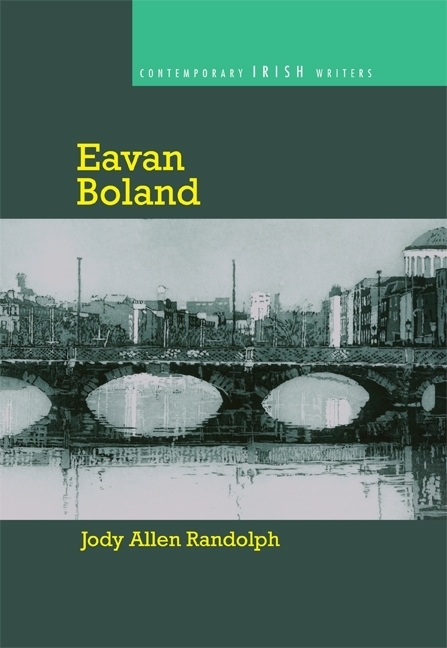 It’s rare to encounter a fully-fledged monograph on an Irish poet, rarer still when that poet is a woman. This book, clearly the product of decades of engagement, is published in the U.S. in association with Rowman and Littlefield and simultaneously by Cork University Press as part of the Bucknell series, “Contemporary Irish Writers,” edited by John Rickard. Eavan Boland is a beautifully written, erudite, and compelling account of the development of a hard-won and complex set of poetics. As a volume it will stand as both the definitive work on Boland’s career to date and as an example of the kind of exemplary engagement many poets would hope to receive from an outstanding humanist critical thinker such as Randolph.

Randolph outlines the approach the work will take in the introduction, explaining that she hopes to avoid the risks of a too widely framed discussion as much as those of one with too narrow a focus. The book therefore takes a chronological approach, seeking to give an account of Boland’s work across “recurring coordinates—the past and history, nation and tradition, place and displacement, silence and expression, ethics and aesthetics, the public and the private, the body and maternity, language and identity, representation and recovery, exile and return” (xxx). This approach creates pleasing unities and allows even someone new to Boland’s work to use this book both as scholarly guide and interpreter. The chapters begin with two on origin and influence, and from chapter three onwards, each deals with either two or three volumes by Boland, taking the prose works on in the same way as the collections of poems. Through this arrangement, Randolph makes the argument (as does Boland) that they are all part of the same project.

An early emphasis is on Boland’s work as having wider intersections than those most associated with Irish Studies.  Randolph makes the point that this work has been analyzed using various critiques, including post-colonial and feminist prisms as well as those emanating from ekphrastic discourse and even trauma theory. Randolph’s position on this is that the diversity of influences and allusions attributed to Boland worldwide is evidence of the transnational reach of the work. Randolph is less interested in exploring how identity-politics or an emphasis on the socio-political might possibly take readers on a parallel path, one that considers poems primarily in terms of poetics, and which might thereby disallow some of the pleasures of the work itself.

However, while this account does focus on the progress of a poet “from the fixed boundaries of the local and national to wider horizons of the diasporic, the transnational and the international” (xxxi), there is also a concern with elements of craft. This includes discussion of Boland’s changing poetic line, her management of imagistic range, and the internal dynamics of selected key stanzas and touchstone poems. This book bears the mark of an author with privileged access to its subject, and allows the reader to experience that by proxy. Such insider views include, for instance, a moving description of how the “we are always too late” of “Outside History” arose (106); examples of some unpublished verse; and a consistently precise marshaling of Boland quotes, some from private papers.

One of this work’s strengths is the lucid description of the artistic impulses which led to the growth of Boland as a poet. Randolph excellently elucidates what she calls the “concept of the difference between the past and history” (2) in Boland’s work, as well as how the past can be intruded upon in her poetry by “transgressing on language and memory” (15). Randolph animates the arguments: the struggle to allow unofficial tellings into the poem and realize the marginalized and silenced within both the poem itself as well as the very act of the making of such a poem. Biographical detail is used to amplify the account of the developing poetic. Boland’s paternal family, we hear, “reveals a familiar Irish pattern of compromise with colony, even of advancement through it” (5). And Randolph does link such observations to how Boland charges the cache of family images into memorable palimpsests, creating a distinctive symbolic register within the poems.

This book gives a detailed account of a poet who essentially had to do her poetic growing up in public since her first published collection was written before she was twenty. Coupled with real and well-documented difficulty of claiming poetic space as a writer who is a woman, it is no wonder then that this poet articulated her own developing poetics in ways so distinctive as to essentially form the main discourse from which others would have to deviate if they were to contribute radically to that critical arena. While Randolph is not among the latter group of critics, scholars such as Edna Longley and others are given due mention here, along with commentators such as Victor Luftig and Albert Gelpi, whose differing interpretations of Boland in relation to Adrienne Rich make for illuminating discussion on how poetic choices are formed.

This book is also valuable in its descriptions of the changing nature of Irish cultural reception and of Boland’s part in this shift, especially in the chapters, “Out of myth into history” and “Changing the past.” Discussing the intellectual pressures Boland faced as a socially engaged poet in the early nineties, one aware of the various shifts within the other venues of poetry, Randolph gives a succinct summary of what underlay the arguments around the publication of the Field Day Anthology of Irish Literature. Boland of course played an important part in the protest against the anthology’s omissions, not just of contemporary women writers but also regarding the lack of female section editors and the lack of analysis of the women’s movement. Randolph is clear that Boland’s main critique of The Field Day project relates to her own poetics as it shows up the dangers inherent in putting together canons which confuse power with authority. Randolph also describes the fruits of intellectual cross-fertilization between Boland and other thinkers such as Mary Robinson. In this, Randolph gives a rounded articulation of Boland’s developing realization of how “the construct of the woman poet can be an agent of canonical change” (131). She widens the discussion to include debates on the role of the poet in a time of violence, describing Boland’s aesthetic shift to exploring how “private energies relate to public violence” (60). She also takes eloquent account of the Robert Duncan/Denise Levertov disagreements about what the role of a poet should be in a time of war as well as Boland’s identification of precursors who inscribed such a private vision, including Emily Dickinson and Sylvia Plath.

Randolph’s own readings of poems are nuanced and multi-layered; she creates new intersections between individual poems and notes new forms of answering-back in Boland’s volumes with intriguing readings of “My country in darkness” and “Anna Liffey,” among others. She gives due space to After Every War (2004), Boland’s work of translations from German, and rightly links this work to the poet’s concern with privately inscribed perceptions of post-conflict moral disorder explored in later volumes such as Domestic Violence (2007).

Finally, in discussion of poems such as “Becoming Anne Bradstreet,” Randolph brings the tropes of displacement, hybridity, and “the disruptive journey across oceans and cultures” (183) into relief. She claims a place for Boland’s influence on broader definitions and realms of thinking, thus contributing a “new meaning to a category where diaspora, dissolving identities, imperfect barriers and new identities are dissolving definitions” (183). In a world where, as Randolph says, “the global presses hard on the old identities of place and nationhood” (184), this is a timely and essential volume of criticism. In making the argument that Boland’s emergence as a poet had a metaphoric quality, this work decisively amplifies the study of this key poet and of Irish letters, moving both of these out of the fixed boundaries of the local and the national and onto the world stage.