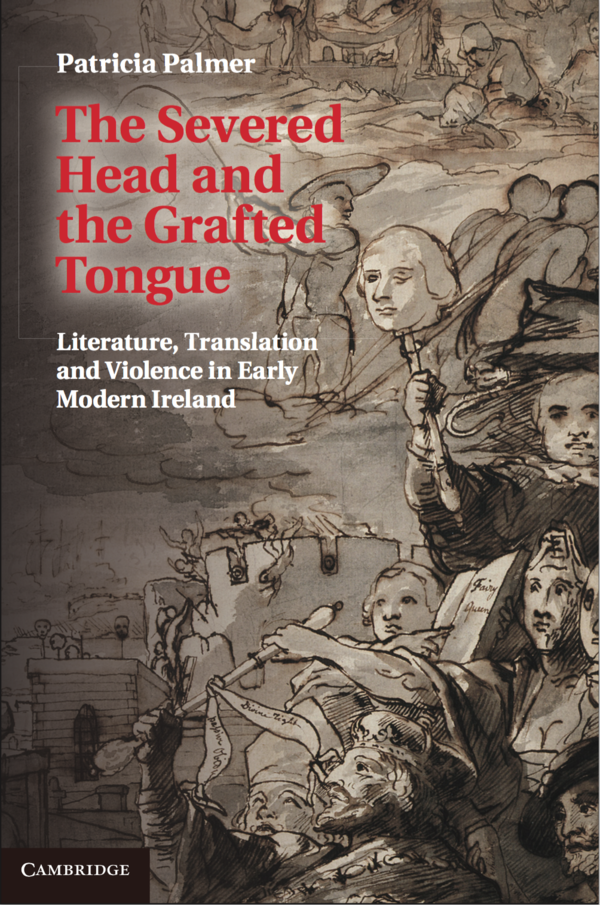 What is the relationship between violence and literature, atrocity and art? This is the question at the core of Patricia Palmer’s second book. Focusing on the figure of the severed head in late sixteenth-century Ireland, her study ranges wide in its unfurling of the resonances of decapitation. It encompasses that canonical literary figure of scholarship on the Elizabethan conquest, Edmund Spenser, as well as his military and administrative contemporaries (the “writer-fighters”) John Harington and George Carew, the Old English Palesman Richard Stanihurst, bardic poets, and a treasure trove of archival riches that shed light on the “unholy pairing of swords and poems” (94). En route, we are shown the many semantic functions of the decapitated body: humiliation of the enemy, proof of loyalty to the crown, linguistic colonization, but also Catholic veneration of dismembered body parts as relics. Hence, the trope can serve as an icon of resistance as well as a symbol of conquest. Palmer memorably contrasts the severed head with the skull—a “memento vitae” rather than “memento mori”—and sets out to reveal the uneasy connotations that entails.

The book opens with a survey of the historical evidence, from the known (Webster’s The White Devil) to the obscure (the beheading of cartographer Richard Bartlett for daring to map the Gaelic territories of Ulster). Palmer sifts this material to show that the sensationalist value of the trope was malleable: where beheadings were legitimized by the English state as punishment for treason and rebellion, they were enacted on the other side by native Irishmen schooled in Gaelic mythological sagas and in reprisal against the state-sanctioned methods of colonial armies.

In literary terms, a key theme of the book is the evolution of genre—specifically romance and epic—as it collides with real historical violence. John Harington’s translation of Ariosto’s Orlando Furioso was made in exile from Queen Elizabeth’s court, between his becoming an undertaker of the Munster Plantation in 1586 and his visit to the household of Hugh O’Neill, earl of Tyrone, in 1599 (with a copy of his translation). Palmer holds that romance is “the genre par excellence of the severed head” (44) and reminds us that Ariosto also wrote in the aftermath of recent warfare. She sets his approach to aestheticizing violence side-by-side with Harington’s rendering, arguing that the latter shifts romance to epic by stressing didactic instruction and historicist pragmatism. The two authors are used to illustrate the evolution of romance combat and decapitation, from Ariosto’s “light-touch, sportive, comedic, wistful … frolicsome and individualised” passages to Harington’s rather more leaden “efficient and unspectacular” depictions (64-5). In the process, she explains (even exonerates) the long-lamented clunkiness of Harington’s translation.

The discussion of Spenser’s Faerie Queene focuses on the notoriously violent Book 5 and Spenser’s representation of his former employer, Lord Deputy Grey, as Artegall. By transforming a living to a dead face, Palmer suggests that the severed head enables the move from empathy to othering that is characteristic of colonial romance (adapting Richard McCabe’s formulation). Observing that allegory struggles in the face of proximity to historically violent reality, she directs her attention to the key moments of the poem where Spenser fails to maintain allegorical integrity, allowing historical specificity to rupture it.

George Carew, Lord President of Munster and scourge of the Nine Years War, also used his time in Ireland to embark on translation—in his case, from the Spanish Alonso de Ercilla y Zúñiga’s romance, inspired by the conquest of Chile in the mid-sixteenth century, La Araucana. Palmer characterizes his translation of the first 16 cantos, which reduced the text by almost half, as an “executive summary in prose” (104). Unlike Harington, who imposed didacticism on Ariosto’s story, Carew is intent on learning lessons he can apply to the wars of Munster; “he can scythe through the apparatus of romance to get what he wants: instruction in fighting indigenous rebels on mountains and bogs” (112). Alive to the irony of the protestant English colonist’s identification with the Spanish catholic colonial perspective, Palmer argues that his failure to complete the translation is rather a deliberate decision not to translate the second half of Ercilla’s original, in which the Spanish author equivocates and critiques his country’s colonial methods.

The story of romance presented here is one of relentless pushing toward the prosaic and the brutal, informed by and unable to escape the violent realities of these writers’ Irish experiences.

The final chapter steers discussion onto classical epic from the perspective of Richard Stanihurst. A Dubliner, Stanihurst’s first published work was his contribution to Holinshed’s Chronicles, in which he was at pains to establish the loyalty and distinctiveness of the Old English community. The focus of Palmer’s discussion is his translation of the first four books of Virgil’s Aeneid, published from exile in Leiden in 1582 and in London the following year—a work nicely lined up beside Harington and Carew as the one other major translation produced during the Elizabethan period. Stanihurst’s Virgil is best known for its multitude of coinages and unpredictable rhythms (to the extent that it is sometimes seen in the line of Finnegans Wake). Importantly, Palmer challenges the received idea that Stanihurst’s linguistic invention derives from his decision to translate in hexameter, pointing out that this feature of his writing also pertains to a high degree in his other published works. Her argument instead posits that this lexical energy constitutes a stylistic dismantling of epic and an attack on imperial epic, in particular, articulating an argument that has also been made of later Hiberno-English writing: “to the victors belong epic, with its linear teleology; to the losers belongs linguistic extravagance, with its subversion of imperial purpose” (130).

The political appeal of this line of argument is evident throughout a book that is firmly positioned as a work that sees the Elizabethan state’s aggressive policies in Ireland as ferocious conquest, that aims to understand English voices in those terms and to reclaim the voices of the conquered in Irish as well as English. Hence, the book’s coda deals with a number of bardic elegies which confront head-on (a pun that Palmer herself admirably resists) the traumatic burden of witnessing to their beheaded patrons. Such evidence is all too scant and its representativeness cannot be fully gauged—a factor that Palmer highlights in her final discussion of Tadhg Dall Ó hUiginn, who was murdered with his family in retaliation for a satire against the O’Haras, despite his elegiac lament for two of their kinsmen, addressed to their staked heads. The insistence on a rounded picture, even if it can never be comprehensively inclusive, extends to the expansive worldview Palmer brings into play. The book’s title is derived from a John Montague poem, and extracts from works by Seamus Heaney, Sarah Broom, Padraic Fallon, and J. M. Synge are woven into the narrative in order to draw out the continuing relevance of her subject.

As with her previous book, Palmer demonstrates mastery of the archival sources for early modern Irish literature and history. Her marshalling and signalling of their wealth and richness in itself should inspire future researchers. Her culling of the illuminating detail brings fresh perspectives to bear on the period. She deploys the cultural lexicon of our own age at key moments to bring the argument alive: Carew’s translation of Ercilla is “a counter-insurgency handbook” (113); Humphrey Gilbert’s post-battle erection of a corridor of staked heads is an “atrocious sculpture,” a “grotesque installation” (7). Always attuned to the telling constructions in the texts she discusses, Palmer has a winning way with metaphor herself; her description of Timias beheading the Foster’s brothers in Book 3 of The Faerie Queene, for example, sees “the bones of history peep[ing] so visibly through the allegory’s paper skin” (83). In its refusal of simplicity and insistence on complexity, this work reads almost as a historicist meditation on beheading, following the material where it leads and throwing open further possibilities for research. It would be interesting, for example, to consider the idea that “There was something qualitatively—and quantitatively—different about the extreme violence of the Elizabethans” (35) by comparison with decapitation practices across contemporary Europe. There is much to digest and contemplate in this study; the density of ideas will reward re-reading.