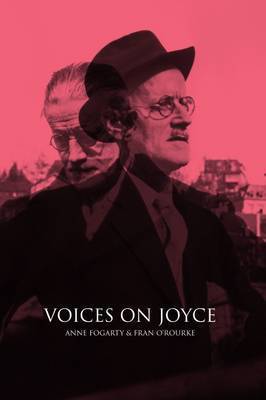 Has anyone ever measured Joyce’s literary umbilical? The counting and cataloguing of so many units of literature could offer itself as thesis material. Pursue, however, the quality and not the width, and the task daunts less. We have still only one great biography; we have several multiple—and some valuable indeed—cross-sectional works; less than two handfuls of acceptable interpretation; in recent time, some excellent online discussions and examinations have surfaced; and by now, generations of paper storms by way of dissertation, analysis, disquisition have blown across the universe. Some offer glorious argument and some purvey Derrida-like, deliberately opaque showing-off—out-Joyceing Joyce, eating the umbilicus. But they’d all make him smile, happy that his immortality device is still chugging away, keeping whomsoever falls for it as busy as he hoped for as long as he wished: we’ll soon be into the second century.

Voices on Joyce, edited by Anne Fogarty and Fran O’Rourke, flowed from Bloomsday Centenary lectures at the Newman House. Jointly and severally, the twenty essays, plus Dr. Fogarty’s introduction, put their hands on the rubber-stamp that says “Enjoyable.” Some of us have been brandishing it for years—meaning that just because Joyce has gained an impenetrable tag doesn't deny the old artificer his dance steps as well as his depth. When a volume on a figure such as Joyce appears, and we can call it enjoyable as well as intellectually sensible, we are—at least I am—motoring.

Full disclosure: I have a particular and intense interest in all new Joyce publishings because I upload on my own website a weekly blog named Re:Joyce. I began it with deliberate evangelism in mind, and undoubtedly entertainment, while disguising, I hope, some sincere chops; in short, I built it for all who felt that they had failed at reading Ulysses. Phrase by phrase, I hack at the text, tracking down the songs and the saws and the sayings—embedded and often disguised—that so enrich this prime number of a novel. At the moment I’m almost at the end of Laestrygonians, with 320 podcasts on the website and, as I write this, a total of 2.24 million downloads: currently it's downloading at the rate of about 2,000 a day and this statistic will spike as soon as term papers are needed across the world.

My point is—if a Joyce publication works for me it will also work for my two million listeners, who are all over the planet: Durban, Seattle, Agadir, Rome, Budapest. Internet technology doesn’t only show me the clusters, it can highlight the pinpoints. Who, I wonder, is my lone listener in Uzbekistan? And I love my senior European ambassador who listens as he jogs through a park near his Asian mission. To all such devotees I can recommend this collection of essays that feels like a festschrift—because it works. Without sacrificing rigorousness. Or illumination.

In her introduction, Fogarty boards every novelist’s life-raft: “Truth and fiction are inherently fused and can never be dissevered” (2). I wish she’d gone further and said, “What does it matter?,” especially as every novelist worth an egg knows that some of what we call “truth” in our daily lives is too misshapen to put into fiction. Which seems to me the entire point of Joyce—he wasn’t afraid to, and he never separated them, a point underscored by many of these lecture-essays.

I went straight to Joseph Long on “Joyce, Dante, Homer—and Beckett Too,” and was at once rewarded with this; “It was not in the nature of Joyce to choose models for himself, be it Dante or anyone else. Rather, he establishes patterns and parallels which he develops into a system, in a way which reflects perhaps his early interest in the occult. It is as if hidden, subterranean forces shaped events” (201). Long also shows us Joyce the international, time-traveling chef, perhaps the first such creature in Modernism, with his meals of Homer, Virgil, and Dante, and his garnishes of Vico, Bruno,  et al; “One century, more or less, separates Bruno from Vico, and 200 years separate Vico from Joyce” (203).

Now the pinball machine begins to light up (Joyce mixed metaphors too, so what the hell), and, not for the first time, I wished aloud that Jung had got to Joyce or Joyce to Jung—argue either side as you wish—because of how often Joyce achieved a near-perfect trawling of the unconscious. Was it Jung or Freud who remarked that the unconscious mind is a tiny island floating on top of the vast sea of the unconscious? Or was it Joyce?

And then, in the Beckett connection, I crossed an old path. Long also reminds us how Joyce made Sam one of his promoters and draws valuable attention to a Joycean collector’s item. Early in 1929, transition, a literary review of considerable standing in Paris between the wars, published a dozen promotional articles (one of them by Beckett) regarding Finnegans Wake, which Joyce was still calling Work in Progress. The editor of transition was Eugene Jolas, whose widow, Maria, originally from Louisville, Kentucky, I visited many times on the Rue de Rennes. Joyce’s connections are over ground as well.

Terence Dolan discusses “Joyce: Babbel or Babel?,” a contribution of satisfying accuracy and lively revelation. Dolan demonstrates that, time after time, in dissecting Ulysses, the secret lies not just in the language, but—and perhaps more—in the pronunciation of the language as it fell from Joyce’s Hibernian lips. It fools interpreters. In Telemachus, the ragging of Clive Kempthorpe produces the line, “he hops and hobbles round the table, with trousers down at heels, chased by Ades of Magdalen with the tailor’s shears.”[1] Once you know that Ede and Ravenscroft, tailors to the Oxford colleges, is universally referred to locally as “Edes,” the Hibernian leap takes you to a pronunciation of “Edes” as “Ades.” An old linguistic joke that only the Irish can grasp: “Which is it: ‘eether’ or ‘eyether?’” The Answer: “Ayther’ will do.” Dolan’s thrust, and his years of specimen collecting in the rainforests of language and dialect, confirm one of Joyce’s greatest talents—his gift of understanding that language is as flexible as paint, and more vivid, and to succeed on the page it must also succeed on the ear.

In “Suspecting, Proving, Knowing: Three Cases of Unnatural Death in Joyce’s Ulysses,” the late Adrian Hardiman provided the essay that I think Joyce might have most enjoyed, not least because of the opening two sentences: “Ulysses is not often thought of as a murder story, or even a story containing murders. But homicides and other crimes, as well as civil claims, abound” (51). An editor I knew in London used to say that any piece of writing that didn’t cause you to hear in your head the phrase, “Now read on” had failed. In this case, reading-on takes one down a lighted pathway—and the lantern-bearer is without question a lawyer; “Many characters in Ulysses jump to conclusions. A small amount of ‘evidence’ acts upon an ever-present fund of prejudice to produce startling conclusions’ (52)—and Hardiman cites Bantam Lyons’s misinterpreting of Bloom’s remark that he was about to “throw away” the newspaper as a tip for Throwaway in the Gold Cup (52). The raciness (forgive me) beneath the argument is so appealing.

By now it’s clear (to me at any rate) that I began to read this book as a pursuit of my own hit parade—a hierarchy of the aspects of Joyce I most love, and which most excite me. Number Four—“Joyce and Aristotle” by Fran O’Rourke may even act as a primer for Proteus, the pons asinorum of Ulysses. In “The Memory of the Dead: Joyce and the Shade of Parnell,” Fogarty’s examination of Parnell’s place in Joyce’s psyche opens up reasonable explanation of why Joyce has proved so dissatisfying to readers who have wished that he was more political (but he was, he was!). At Number Six in my hit parade, Joseph Brady’s “Dublin: A City of Contrasts” is a Joycean literary app. in the way architects use Computer Aided Design (CAD).

Such a hierarchical selection is invidious; like all comparisons it suggests the categories of “lesser,” and that is not fair to this book. The collection is certainly too short, and it has, for me, lacunae. For example, given the vividness, though brief, of his writing on the period, I would have welcomed something biographical on Joyce’s medical student months in Paris; I'd also have welcomed an essay on his imitators, and/or his detractors; I’d have welcomed some psychological exploration of the relationship between the acute physical, and then emotional pain Joyce knew while in the thickets of Work in Progress. (And I'd have welcomed, overall, better proof-reading.)

But Dr. Johnson had the answer to such carping. When someone criticized a travel writer, Thomas Pennant, whose work he enjoyed, Johnson said that Pennant’s descriptions went as far as Pennant wanted them and, therefore, they should be seen for what they are and not what they might have been; Here, Johnson was saying, we have a fellow six feet tall and you complain that he’s not seven. Call Voices on Joyce six feet six.