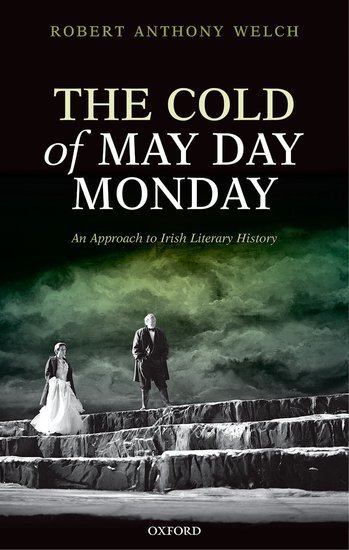 The posthumous publication of Robert Welch’s The Cold of May Day Monday: An Approach to Irish Literary History gives his readers the opportunity to hear the voice of an Irish scholar who was always eager to bring Irish literatures to an international audience. As Chairman of the International Association for the Study of Irish Literatures (1988-1991) and as the General Editor of the Oxford Companion to Irish Literature, in all of his writing and teaching, Bob Welch demonstrated his ability to work comfortably in Irish literature in the Irish language as well as in Irish literature in the English language and to engage his students with those literatures.

The Cold Day of May Day Monday is based on the lectures that Welch gave at the University of Sassari (Sardinia) in Spring 2009. The lectures were a feature the twenty-year relationship between Sassari and the University of Ulster that has been part of the ERASMUS Programme, the European Union student exchange (1987). Presumably in the lectures themselves, Welch built on the historical similarities between the two islands, who share a history of Bronze Age culture and their remains, of invasions by foreigners (8th century Vikings to Ireland and 9th century Phoenicians to Sardinia) and of the measures of autonomy won by both countries in the mid-twentieth century. In the lectures that became The Cold of May Day, Welch designed an innovative approach to Irish literatures for the general reader that focuses on significant themes and issues based on a small set of key texts of Irish literature written in both English and Irish throughout Irish history rather than on a traditional chronological survey of the literature, what he called “deep and strategic analysis of major work” (2).

Welch’s key theme concerns considerations of the presence of the Irish past in contemporary Irish literatures. In relation to this overarching theme, Welch includes topics such as the matter of conquest and colonialism in Irish history and literatures, the folk tradition that continues to inform both the past and present literatures of Ireland, the devastation and depopulation of Ireland as a result of the Great Irish famine, the Celtic Revival and its part in Irish nationalism, the vibrancy of Irish language literature and traditional music, and the literary treatment of the Northern Ireland “Troubles.” While Welsh opts for a thematic approach, the chapters are still arranged in chronological order. Welch based his selection of texts on "living authors whose work would reveal connections with, or sharp disjunctions from, the traditions of Irish literary experience as outlined in this book" (3).

A preliminary discussion of Welch’s title deserves attention. In Irish folklore, the May Day hag is traditionally believed to be a witch who steals milk from cows on the first day of summer, Lá Bealtaine. Welch’s hag story, also set on May Day, describes a hag, or cailleach, who presides over the awesome powers of the world; she gives no quarter to those who challenge her. This hag resembles the figure that Proinsias MacCana identified as the “puella senilis, the woman who is literally as old as the hills who is restored to youth through her union with her rightful mate.”[i] Readers of Irish literature will recognize this figure as the poor old woman in W. B. Yeats’s and Lady Gregory’s play,  “Cathleen nί Houlihan.” The difference between Welch’s and MacCana’s hags is the transforming power of the union: for MacCana’s hag, in Celtic Literature, the hag is transformed by her marriage; in “Cathleen nί Houlihan," the hag is transformed by the sacrifice of the young man. All in all, the inclusion of the May Day hag as a trope throughout the book highlights the aspect of continuity between Irish folklore and modern Irish literature that Welch emphasizes throughout the book.

Indeed, Welch’s book is less about the cailleach and more about the synergy between the two literatures that plumb the layered Irish past, a past which Welch argues is often mythologized or distorted. He agrees with Irish writer Frank O’Connor that the history of Irish literatures is a backward look. (The title of O’Connor’s history was, in fact, The Backward Look [1967]; it was called A Short History of Irish Literature in its American edition.) Both writers identify key themes in early Irish literature that continue to influence writers down through the twentieth century.

Unlike O’Connor, who was a gifted amateur scholar in addition to his major vocation as a literary writer, Welch studied Irish, English, and music at University College Cork. Welch had the good fortune to have studied Irish in the 1960s with Seán Ó Tuama, whose anthology of modern Irish poetry Nuabhéarsaίocht: 1939-1949, a decade before, introduced readers to a trio of mid-century poets: Máirtίn Ó Direáin, Máire Mhac an tSaoi, and Seán Ó Riordáin. Poet, playwright, critic, as well as anthologist, Ó Tuama identified Ó Riordáin as a major poet and mentor to a group of Irish language poets known as the “Innti” poets, chief of whom is Nuala Nί Dhomhnaill. Like Ó Tuama, Welch champions the Gerard Manley Hopkins-inspired Ó Riordáin, praising his preface to Eireaball Spideoige (1952) with what Welch identified as a “call in the Catholic church for a spirituality that will be adequate to the modern world” (211).

While Welch was a Corkman and a Munster partisan, he identifies a Galway man, Máirtίn Ó Cadhain, as the great prose stylist in modern Irish. Like Nuala Nί Dhomhnaill, Ó Cadhain believed that his Irish-speaking culture was in its “death throes” (202), and, like Nί Dhomhnaill, he chose to write in the Irish language. Despite Welch’s assertion that Ó Cadhain refused to see his masterpiece Cré na Cille translated into English, since Welch’s death two translations of the novel have appeared. Welch would certainly have privileged The Dirty Dust (2015), his old classmate and dear friend Alan Titley’s translation; however, Liam Mac Con Iomaire’s Graveyard Clay (2016), the translation of a native speaker from Ó Cadhain’s dúchas, better captures the Cois Fharrige idiom.

Welch’s scholarly focus was on translation, and he introduces his readers to Irish bardic poets like Tadhg Dall Ó hUiginn and to the seventeenth-century poets Dáibhί Ó Bruadair and Aodhagán Ó Rathaille, who wrote of the fall of the Gaelic order after the defeat at Kinsale and the Flight of the Earls, an event captured by John Montague in the lines from his poem, “The Flight of the Earls”: “Disappearance & death / of a world.”[ii] Welch makes good use of the texts from his book A History of Verse Translation from the Irish 1789-1897 (1988), in which he considers the translations from the Irish from James Macpherson’s spurious Fingal, an Ancient Epic Poem in Six Books (1763) to George Sigerson’s Bards of the Gael and Gall (1897) in the context of current translation theory.[iii] Welch also draws on his discussion of James Clarence Mangan for his chapter on literature during the Famine, pairing the poet’s “To the Ingleeze Khafir” and “Siberia” to bolster his case that Mangan was “perhaps the most significant Irish poet between Brian Merriman and W. B. Yeats.”[iv]

It is always tempting to second guess a magisterial author of an authoritative book like The Cold of May Day Monday, and while this reviewer notes that Welch apologizes in his Introduction for giving short shrift to certain contemporary poets, he neglects other women writers. He features Brian Merriman, but only briefly discusses Merriman’s near contemporary Eibhlίn Dhubh Nί Chonail’s “The Lament for Art O’Leary”; he surveys the work of Frank O’Connor, Seán O’Faoláin, and Liam O’Flaherty, but there is not a mention of Mary Lavin; he cites the Blasket autobiography of Tomás ÓCriomhthain but not Peig Sayers, and Lady Gregory only receives brief attention in the company of her male colleagues such as George Bernard Shaw, J. M. Synge and Yeats. On the other hand, Welch gives generous attention to younger women writers such as Nuala Nί Dhomhnaill and Marina Carr. In the end, The Cold of May Day Monday presents readers with a view of the history of Irish literatures from one of the most thoughtful and versatile scholars of our time: the late Bob Welch, an astute critic and a generous friend to the Irish Studies community.