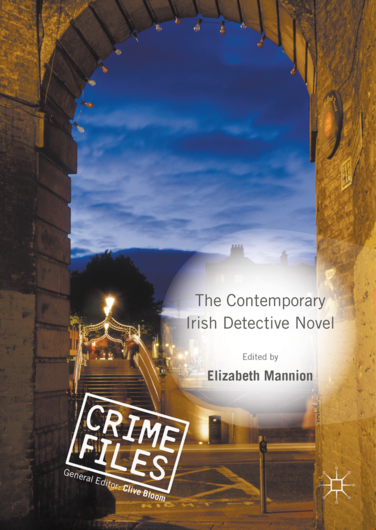 Elizabeth Mannion’s introduction to the collection, The Contemporary Irish Detective Novel, wastes no time in delving into the world of police procedurals and private investigator novels set on the island of Ireland or written by a native. Mannion addresses genre snobbery, the lineage of Irish writers, and the influence of early Irish American culture on the trailblazers of the genre, such as Dashiell Hammett and Raymond Chandler. It’s also noted within the introduction that there is a rich vein of established and upcoming writers from Ireland who could have made it into the collection if not for the unavoidable limitation of space. Mannion makes a point of naming Declan Burke and Adrian McKinty, who will be included in her follow-up collection with Syracuse University Press, co-edited by Brian Cliff and titled Guilt Rules All; “McKinty and Burke have championed the genre through their journalism and contributed to it with their fiction. This book would likely not exist had they not opened the door” (11).

The introduction sets the reader up for a collection of essays that adhere effectively to the theme both north and south of the contentious border. Political examination—or a study of the infamous Troubles—goes hand in hand with the subject of Ireland, and the novelists encountered in this text who choose to write about their homeland rarely shy away from the topic. Again, Mannion and her impressive list of contributors follow suit by drawing attention to even the slightest of political discourse encountered in the books chosen in their studies. The range of issues stemming from the Irish conflict is pleasingly broad. With Mannion’s own chapter examining Jane Casey’s Kerrigan novels, the Irish experience in contemporary London is highlighted. Displacement, a warped sense of identity, jokes with a jag; this is all familiar territory for the masses of London Irish that helped build the city they rarely felt they could lay claim to.

Other standout chapters include “Negotiating Borders: Inspector Devlin and Shadows of the Past” by Carol Baraniuk and “‘The place you don’t belong’: Stuart Neville’s Belfast” by Fiona Coffey. Both scholars have chosen writers primarily connected to Northern Ireland (though the Devlin series straddles the manufactured divide). As expected, they both choose to dive into the current issues and aftereffects born of the Irish and British conflict headfirst. And they do so with an obvious enthusiasm that provides the potential for debate. Particularly Coffey’s chapter, which includes an insightful examination of what constitutes misinformed ‘Troubles trash’ as opposed to Neville’s brand of ‘peace process’ fiction. Some of the assumptions made about the author’s political leanings may raise an eyebrow, which is undoubtedly the intention. In the Irish vernacular, fair fucks to them.

The collection isn’t bogged down by Troubles studies, however. Andrew Kincaid’s chapter on Ken Bruen’s Jack Taylor novels astutely focusses on the socio-economic commentary for which the series is often critically lauded, though not always appreciated by the wider audience. Nancy Marck Cantwell examines the merit of Peter Tremayne’s Sister Fidelma as a feminist icon. Brian Cliff explores John Connolly’s “honeycomb world” for signs of the Irish American experience, and genre-splicing, through the filter of tragic hero Charlie Parker. Arguing for depth in the Ed Loy Series by Declan Hughes, Charlotte J. Headrick points out how there is much more to the Dublin-set series than an homage to Hammett’s Sam Spade novel, The Maltese Falcon. Shirley Peterson and Audrey McNamara also visit versions of Dublin presented by Tana French and Benjamin Black. Delicate themes tackled include post-Celtic Tiger societal trauma, and the sinister grip on the Irish state held by the Catholic Church in the 1950s, respectfully. Respect is not always a given when the subject of crime fiction is discussed, and here lies one of the greatest strengths of the entire collection.

But this is only a snapshot of the intent behind the collection. Each contributor has obviously spent an adequate amount of time thinking about the subtext of the great novels under their charge. And then they’ve employed something akin to the legendary Irish work ethic in the craft of critical writing. As with all works of commentary, there are places for expert nit-pickers to indulge themselves and set about constructing their own arguments for or against those constructed in Mannion’s collection. But that’s not a weakness. Comparatively speaking, the Irish crime fiction genre, and in particular, the Irish detective novel, is in its infancy. There is much more to be written, studied, and committed to university libraries. As one of the early adopters, Elizabeth Mannion is due a notable place among the academics willing to open their minds and include examples of the Emerald Noir movement in real literary conversations. A Spade is a Spade, a Loy is a Loy, a book is a book. They all carry plenty of worth to those willing to value them.

The critical scholars chosen to contribute to the collection are as diverse as the books examined, and this brings much to the table. Crime fiction has often been treated like the freckled, ginger stepchild by literary snobs. Add a little Irish indignation to the mix and you’re dealing with a recipe that may be a little too spicy for the average potato-based diet. But when the fire in the belly needs settled, The Contemporary Irish Detective serves as a powerful tonic to those upset by poor service from the academic world.

Look out for more texts on this and similar subjects now and in the next few years. Brian Cliff recently released Irish Crime Fiction through Palgrave Macmillan and there is the Guilt Rules All collaboration in the works from Mannion and Cliff. See also the future Syracuse University Press release, Finders: Justice, Faith, and Identity in Irish Crime Fiction by Anjili Babbar.