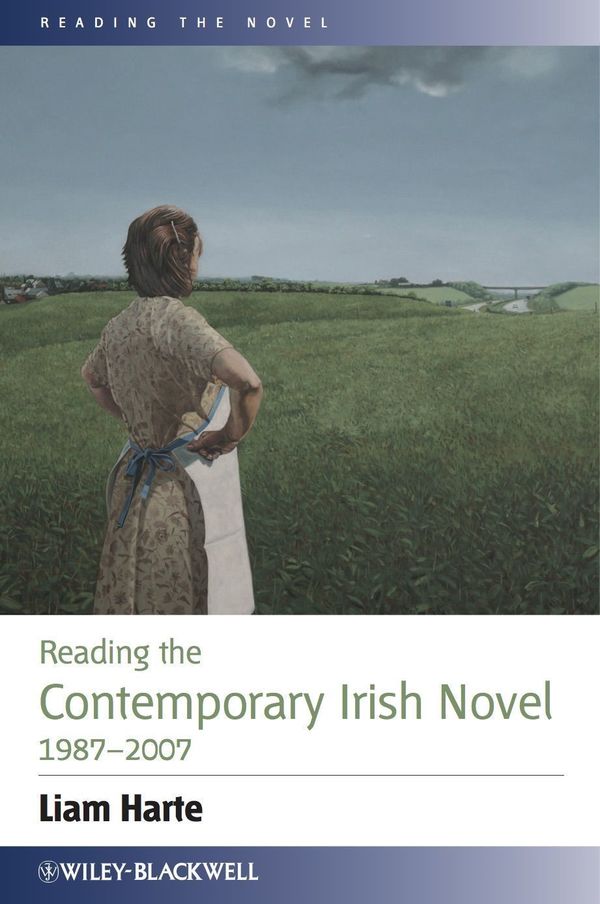 In Deirdre Madden’s recent novel, Time Present and Time Past, a character’s growing interest in early 20th century photography forces him to reconsider his preconceptions about the past as utterly different from the present: he has, as he notes, confused “the technology with what it was recording.”[i] He thinks that the past was as monochrome as are the photographs of the period. In thinking about the novel in Ireland, and not just the recent novel, it might also usefully be said that most literary critics of the form have also mistaken the medium for the message.

Not so Liam Harte, as is evident from this study of the contemporary Irish novel. In the introduction he sets out clearly the issues he believes trouble the form.  History and memory, and the politics of history and memory, are central to any critical understanding of the novel in his estimation, as they are either directly or obliquely reflected in the narratives of an Ireland undergoing massive and rapid transformation from the late 1980s onward. Of particular benefit to the reader is his careful unpacking of the ideas around social realism as the main force in the Irish novel, past and present, correctly acknowledging its slipperiness in any literary context but especially in the contemporary Irish literary context. Simply put, various critics’ enthrallment to realism is a misunderstanding of what the novel can do. Harte mentions Julian Gough’s intervention of 2010, wherein he bemoaned the out-of-touch nature of much Irish writing and the lack of contemporary fiction dealing with the raw here-and-now. Gough’s charge might have had more weight if his own work, mad and thoroughly engaged with the now as it is, was capable of being interesting beyond the immediate moment of its publication. The charge has more substance when it is made by critics such as Fintain O’Toole and Joe Cleary. Their need for the novel to counteract a perceived the retreat into the past is, perhaps, to miss the point of why the past, both distant and more recent, remains a troubling presence in the novel. As with Madden’s hero, these critics – in a way – view the past as one-dimensionally monochrome. However, it might be argued, that when a culture and a dominant neo-liberal economic discourse want us consumers to intensely focus on the now and its multiple (and throwaway) pleasures, to be reminded that there was a past at all– full of life, full of promise, full of nodes of resistance – is hugely important. What else might one generation share with the next? Acknowledging that nothing is ever really new is obviously a lesson worth teaching to a generation who see themselves and their problems as utterly unique. Indeed, in this kind of reading O’Toole and Cleary’s criticism does not just observe or speak the problem of the contemporary moment, but is actually itself a symptom of it.

Harte is certainly aware of these nuances and critical subtleties. For instance he positions Colm Tóibín as a post-nationalist novelist, or a novelist who desires a post-nationalist literary landscape where the deadening, as he sees it, issues of Irish identity and Irish history are no longer dominant. Harte cleverly juxtaposes these commentaries against the novels of Tóibín, who like Joyce and Yeats before him tries to create the critical framework for the reception of his art. Despite most of Tóibín’s pronouncements on the state of the nation or the state of novel, his own art never fails to live down to many of those things he rails against. For example, his work often references Ireland’s history and politics in the most blunderingly obvious ways, demonstrating his need as an author to register that world he so desperately wants to escape. To put it another way, perhaps it might be worthwhile interrogating Tóibín’s writing as being far more interesting, and far more challenging, for it being not being the simple answer to the questions that Tóibín himself asks, but as manifestations (as all art is) of all the myriad uncertainties of a given moment that no author could hope to be in control of. As Harte wryly notes, Tóibín curiously suggests that his own art is a political free zone: no art ever could be.

Harte’s introduction then should provoke the student of the Irish novel with its argument and its overview. As is always the case with a survey study like this, the author must get his retaliation in early, justifying those writers and novels he looks at (he chooses nine texts) and those who he doesn’t offer an extended reading. Thus, there is no engagement with popular fiction in the form of Chick Lit or the thriller genre; no John Banville or Éilís Ní Dhuibhne or Deirdre Madden. While exactly not a problem for this reviewer, because Harte has a thesis and therefore he needs certain texts in order to pursue his agenda, some of the choices are questionable. Even Harte himself realizes that he might have been better served in looking for other examples. The conclusion of his consideration of Edna O’Brien’s not-so-good novel The House of Splendid Isolation is that it is, well, not so good, pointing out on occasion how barely believable the action is at points.  There are any number of novels that are better and would have been better to promote.

His focus on the perils of trauma means that there is recourse to numerous theories and theoreticians of psychological anxiety marshalled to underpin this critical investigation. Sometimes the theory is far superior and weightier than the work it is employed to illuminate. Patrick’s McCabe’s The Butcher Boy, for all its verve and swagger, remains bound to a cartoonish version of a world that has little or nothing to say to a psychological reality or indeed any other reality outside the Beano.  Though, of course, that entrapment is precisely Francie Brady’s dilemma. More successful is the reading of Roddy Doyle’s Barrytown Trilogy which highlights the varied, and productive, contradictions inherent in Doyle’s vision of working class Northside Dublin in the 1980s and 1990s. This intelligent engagement focuses on Doyle’s use of language and how comedy becomes a vehicle for serious comment on the marginalized and the disaffected. Part of the problem for Doyle’s characters that they are unconnected to anything other than their own narrow world: Ireland and Irishness has nothing to offer and therefore the characters need to be “committed” to something improvised and made up. In truth, Doyle’s novels are quite Thatcherite in outlook: the band and the Jimmy Rabbite’s business venture with the chip van show signs of the entrepreneurial spirit that would take grip in the Celtic Tiger period. No matter that the band breaks up or that the van ends up in the sea of Dollymount strand, the point is Tory self-reliance. This too is reinforced in The Snapper: the traditional Irish family – so scorned by liberals as the source of backwardness in Irish society – simply grows and adapts and continues on as it always had done. Thus, Doyle’s revolution is not that revolutionary at all, or if it is, it is a very gentle one.

Hart returns to his focus on the family and on masculinity under pressure in his look at John McGahern’s Amongst Women. Once more trauma and the residual offshoots of violence linger to trouble the present, finding expression in the family unit contained and restrained by the rituals of religion and prayer. Seamus Deane’s Reading in the Dark adds another turn of the screw in its rendering of trauma as a kind of physic haunting that affects individuals and communities and the very language of history and the novel.

One of the more interesting aspects of this study is how Harte’s approach makes links to texts that might not usually be considered together: Roddy Doyle and John McGahern are one such example. Another is the juxtaposition of William Trevor’s Felicia’s Journey, which emphasizes placelessness and the constant transience of characters always on the move, with Colm Tóibín’s The Heather Blazing, which involves, among other things, an intense mediation on the coastal landscape of Wexford, its mutability, and what that constant change might mean for a character who deals with law and the language of law as something fixed. More might be made of the way in which Trevor, unlike many other Irish writers, actually invents characters, places, and plots, in comparison to those who are forever drawn to a very material of reality, if not simple biography, à la Joyce’s rewriting of himself as Stephen Dedalus. In Tóibín’s work, for instance, his minimalist approach and his use of a sparse, stark, and at times colourless prose, might be thought of as an expression of imaginative defeat in the contemporary world. Or, it might be thought of as a brilliant linguistic and formal means of transcending the contours of the local in favour of entering into the global literary sphere wherein Ireland becomes like everywhere else and everywhere like Ireland. In contrast, Harte’s reading of Sebastian Barry’s A Long Long Way argues that its rhetorical excess – its poetry – blunts political complexity rendering his character’s naiveté suspect in terms of the actualities of Irish history.

The book is brought to a close with a thoughtful reading of Anne Enright’s Booker Prize-winning The Gathering. Indeed, the ways in which concealment operates at the level of family and nation around issues of abuse can be usefully applied to all areas of modern Irish life. One of the consequences of concealment is the kind of explosive presence of a hidden past that serves as the recurring motif of this study. The trauma of child abuse is put center stage in the novel, and Harte suggests that Enright’s achievement is in demonstrating how such trauma is a collective as well as an individual experience.  This reading, for me, begins to explain the uncertain nature of Veronica in the narrative. Her voice is at once clever and knowing, she appears to be able to confidently situate others and herself, giving a smart overview of her family in relation to the developments of Ireland toward the Celtic Tiger moment. And yet Veronica represents the alienated individual of modernity, the confident front merely disguising a yawning emptiness within.

Throughout the study it is clear that Harte is alive not only to the issues of content and theme but to how technique and form can dictate readerly responses. As a guide to some of the major issues and concerns of Ireland in the last thirty years and how a selection of writers have dealt with them, this is a substantial engagement with the field. Students of the form will be prompted to interrogate the novels of the recent past, to return to texts they think they know and to reread them afresh with new ideas. As Harte says of Enright’s novel, “resolution” is never finally possible at an individual or communal level. This bodes well for those writing, and those reading, the contemporary Irish novel.