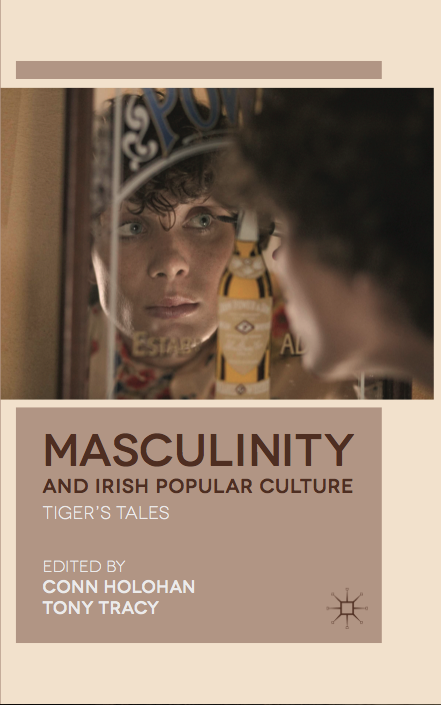 Conn Holohan and Tony Tracy’s collection of essays on masculinity in contemporary Irish popular culture is a readable and engaging book that makes a substantive contribution to the growing field of Irish masculinity studies. The 250+ page volume brings together interdisciplinary essays on music, sports, television, literature, advertising, and cinema, which, when read as a whole, create a rich conversation about Irish masculinity, one that is much needed in Irish studies.

This is not to say that this conversation has not been started; in fact, in their introduction, Holohan and Tracy name the key texts on masculinity that have appeared since 2010. Irish masculinity as a topic of critical inquiry might be new, but it is growing. Holohan and Tracy, interested specifically in the cultural reconsideration of masculinity in the context of Celtic Tiger Ireland (and Northern Ireland), rightly note that gender and sexuality, including masculinity, have been “a central focus of scrutiny and consideration” in the cultural “soul-searching” in Ireland following the collapse of the Tiger economy in 2008 (2). They continue in the introduction to discuss the 2011 presidential election as a kind of symbolic referendum on Irish masculinity, with the five male candidates each representing a different version of Irish masculine identity. The Tiger economy, they argue, has changed the “dominant critical paradigm through which Irish masculinity has historically been constructed,” meaning, of course, “the legacy of colonial relations” (4).

Their chosen essays support this point well, some more explicitly than others. Several essays examine cultural expressions of masculinity tied to the Northern Irish peace process, and these essays certainly explicitly challenge masculinity as constructed through the lens of colonial relations. But each essay offers, in some way, a means of exploring Irish masculinity that breaks us out of the mold of a colonial legacy and what that legacy means for gender. Some of the newer versions of Irish masculinity explored in the chapters include sports figures, trans identities, the male rock/pop star, “new laddism,” new incarnations of the IRA man figure, various versions of subversive or non-hegemonic masculinities, and newly realistic father figures that contrast with the symbolic patriarch of pre-Tiger Irish culture. This list suggests the breadth of this collection; although some of the essays treat similar themes and might overlap somewhat in discussions of particular cultural artifacts (some films are analyzed more than once here), each essay adds its own nuance to the conversation.

Although (as often happens with essay collections) this book is likely to be mined by scholars for its individual pieces, the book reads very nicely as an organic whole. Divided into five parts (excluding the introduction), with each part containing either three or four essays, the collection moves from “Queering Irish Masculinity,” to “Musical Masculinities,” “Masculinity in Drama and Literature,” “Onscreen Masculinity,” and finally to a single concluding essay by Diane Negra that constitutes Part V: “After the Tiger: Gender and Economic Crisis.” The order of the parts contributes to the overall arc of the conversation presented here. By starting off with essays on the queering of Irish masculinity, the editors foreground a debate about whether queer masculine representations in sport, performance, and cinema do truly challenge heteronormative Irish culture. The discussion in Part II of musical masculinities continues this debate, showing how three different styles/figures (boy bands, Oasis, and Joe Dolan) variously reflect, challenge, and exploit conventional images of Irish masculinity. Part II is particularly strong in the way each essay builds on each other, and these essays would be useful for anyone doing scholarly work on Irish pop and rock music; their arguments, while never straying too far off the specific topic of masculinity, provide a good breadth of context for their specific analyses.

As with any collection, there are uneven spots. While there has been a great deal of fiction published throughout the Celtic Tiger period, the two essays about literature focus on, respectively, Patrick McCabe’s Winterwood and Sean O’Reilly’s Watermark. A collection cannot be expected to be comprehensive, but these works and these authors seem somewhat surprising given the number and talent of the scholars currently working on contemporary Irish literature. Additionally, while the music and film chapters work to contextualize their discussions and thus provide a more comprehensive view of the role of masculinity in the particular field, the overall picture of contemporary Irish fiction and its treatment of masculinity is missing, for the most part. The introduction acknowledges how Fiona McCann’s discussion of Watermark, “forgo[es] a cultural studies approach” in favor of close readings. The cultural studies approach, however, works very well in the other essays, and McCann’s essay could have been strengthened by it. Another somewhat weak spot comes in the opening section of Part IV: Emilie Pine’s “Body of Evidence: Performing Hunger” is a provoking discussion of Steve McQueen’s 2008 film about Bobby Sands that would be stronger with a more thorough theorizing of masculinity and republicanism (this theory does come in other essays in Part IV); as with McCann’s piece, good analyses could be greatly improved with better contextualization.

Perhaps the most salient and significant question engaged by all of these essays is to what extent the cosmopolitanism of Celtic Tiger culture has been able to shift or disrupt previously dominant conceptions of gender and sexuality in general and masculinity in particular. Diane Negra’s concluding essay explores how recession culture appears to revert back to traditional notions of masculinity and femininity: “In Ireland’s rapid conversion from capitalist utopia to dystopia, a gendered logic of ascription/explanation for developments whose speed and scale nearly everyone finds overwhelming and disorienting, promises...stabilization through the restitution of essentialized gender dichotomies” (235). Negra’s conclusions might seem fairly bleak in light of the analyses done in the earlier chapters; here we are, back to essentialized gender dichotomies. However, she correctly asserts that all of these analyses of gender in a range of popular culture artifacts comprise important contributions to “an Irish studies critical practice which has too often occluded such considerations” (236).