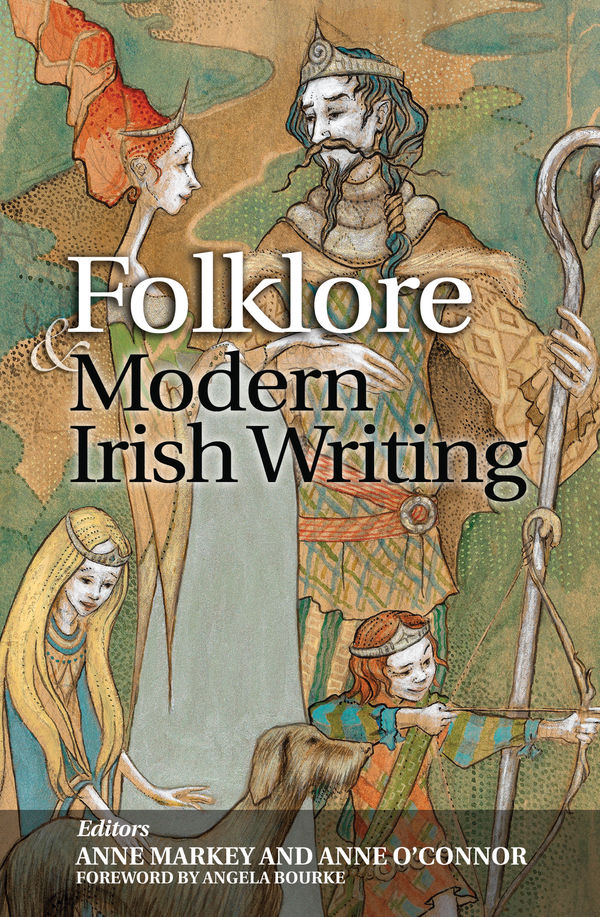 What has become of Ireland’s renowned heritage of traditional oral culture? Scéalaíocht, the long tales that were once considered the defining genre of Irish folklore, proved to be too demanding for the sensibilities of modern audiences. By the mid-twentieth century, scéalaithe—the storytellers who specialized in these structurally-complex tales—were only called upon to perform their repertoire for the purpose of documentation. In today’s world of compulsive zapping between “apps” and virtual communication through 140-character “tweets,” patient listeners are even harder to come by. And yet, as convincingly demonstrated in Anne Markey’s and Anne O’Connor’s insightful edited collection of essays, Folklore and Modern Irish Writing, echoes of oral tradition are ubiquitous.

For less-patient readers, eager to cut straight to the very essence of folklore in contemporary Irish writing, I would suggest to start reading this volume at its end. In a twenty-four-page afterword, the Leitrim playwright and poet Vincent Woods offers a beautiful reflection on “Folklore as Source and Inspiration,” which seems to say it all. He spins a tale that begins with the radical James Gralton—who was deported to the United States in 1933 and has just recently gained the recognition he deserved, thanks to Ken Loach’s film Jimmy’s Hall (2014)—and leads to the even lesser-known Tommy Gralton, who participated in the 1968-’69 Arigna coal miner strike, which was the subject of a fascinating RTÉ radio documentary in 2009. These two noteworthy Connacht men (who share the same surname, though they were not related) were recalled in folk memory but, like many other outstanding individuals of local repute, are unmentioned in official histories of twentieth-century Ireland. In passing, Woods tells us about how encounters with bereavement in his family reinforced an appreciation of the local traditions on which he had grown up and which are celebrated in his poems on “A World of Thirteen Acres.” His observations are studded with aphorisms that might have seemed like clichés, had they not been anchored in autobiographical experiences: “sometimes folklore reads the future” (228); “folklore has carried me, as music and poetry carry me, to a calm place where sight meets transcendence” (230); “folklore led me to art: to the beauty of the spoken word, the power of storytelling, the marvellous imagination of folk surrealism, the gift of language and writing” (231); “folklore guided my steps and I rest upon its strength in times of need” (232); “folklore carries suppressed history and truth” (239); and finally, “sometimes folklore helps us see past seeing” (240). In finding his muse, Woods draws upon béaloideas—oral knowledge, that he picked up effortlessly over the course of his lifetime: “so much of what I absorbed was by dint of repetition, by living, watching and listening to the lives around me. The stories told over and over again” (227).

In the penultimate chapter, Éilís Ní Dhuibhne, an author who has made good use of folklore in her novels and short stories, identifies two principal ways in which contemporary Irish writers utilize folklore:

(a) Images and motifs derived from traditional stories (or songs) are used metaphorically, to extend the meaning of contemporary texts, and atmospherically, to enhance and embellish texture;

(b) The forms of oral narrative, at either a very elemental level, or at a more developed level, are used in the plot structure of contemporary texts. (214)

Ní Dhuibhne holds up the poet Nuala Ní Dhomhnaill as an eminent example of how a creative writer can become “a kind of scholar and interpreter of folklore” (210). Ní Dhomhnaill’s standing as “the Irish writer most often associated with folklore” (209) is confirmed in articles by Máirín Nic Eoin and Bríona Nic Dhiarmada, who point out that she “has used folklore sources more than any other contemporary Irish-language author” (151), and that her engagement with “discourse and motifs of folklore…more than any other contemporary poet in Ireland, in either Irish or English, has followed Yeats’s example” (144).

Comparison with the writings of the founding figures of modern Irish literature is apt. Folklore was given pride of place in the Irish Revival, when tradition was widely seen as a vital resource for cultural regeneration. Yeats, as noted in this collection by John Dillon, paid homage to Mary Battle, a servant in his uncle’s house, and exclaimed that  “much of my Celtic Twilight is but her daily speech” (86). Yet, fin de siècle literary recourse to oral tradition was not all that novel. Earlier in the nineteenth century, Anglo-Irish literature exploited the romantic fascination with vernacular traditions. William Carleton is just one of several celebrated writers in this vein. Another, lesser known, author—discussed in this volume by Marian Thérèse Keyes—was Anna Maria Fielding Hall, who collaborated with her husband Samuel Carter Hall in producing popular travel writing that was animated by “sparkling episodes” drawn from folklore (67). This impulse was typical of the quasi-ethnographic style that came into vogue after the passing of the Act of Union. Late Georgian and Victorian authors mined the findings of antiquarian studies of oral traditions—written by the likes of Thomas Crofton Croker—for colourful vignettes of Irish rural life, as it underwent transition. After the devastation of the Great Famine, folklore evoked a memory of bygone customs and habits by which Irish provincial culture could be distinguished from British metropolitan culture.

As Ireland moved into the twentieth century, language revivalists, such as Douglas Hyde, turned to béaloideas in search of sources for a de-Anglicized modern Irish literature. In two collections of short stories—Íosagán agus Sgéalta Eile (1907) and An Mháthair agus Sgéalta Eile (1916)—Patrick Pearse, as shown by Anne Markey, depicted the traditional practices and pastimes of the Gaeltacht, even as he rejected the narrative structures of folktales and legends. His allusions to folk beliefs, which, contrary to the assumptions of some historians, had not been entirely swept away by the “devotional revolution,” tellingly demonstrate how folk-life continued to offer alternatives to the standardization associated with modernity.[1]

Eiléan ní Chuilleanáin follows how the early work of  Padraic Colum and, in the years after independence, the writings of such authors as Patricia Lynch and Eilís Dillon, produced juvenile literature that retold Irish folk stories to new generations of children. The reverence bestowed on Gaelic folklore in the ideological frameworks of de Valera’s Ireland triggered an adverse reaction, leading critics to question the literary merit of folk-inspired cultural production. An indication that this dismissive modernist critique may have finally run its course can be detected in the changing fortunes in the reception of the iconic Blasket Island storyteller, Peig Sayers, who has once again become a topic of interest. Irene Lucchitti argues that the centrality of folklore in Peig’s recollections accommodated an autobiographical persona, which is refreshingly distinct from the egocentric self-indulgence of the “Me Generation” and its successors.

Where do Irish folkloristics fit into all of this? The first part of the book—“Collectors and Collections”—is devoted to discussing aspects of the National Folklore Collection at University College Dublin. The editors state that “this initial focus on folklore in its own right, and on the study and collection of folklore, is a necessary prerequisite to the ensuing sections which deal with literary recourse to and adaptations of folkloric material” (12). This claim may ring true for Kelly Fitzgerald’s general survey essay on the development of Irish folklore studies, but is not all that convincing when it comes to the specialized topics of the other essays in this section: Ríonach uí Ógáin scrutinizes the correspondence of a part-time female folklore collector, Bríd Ní Ghamhnáin (Bridie Gunning), and Paul Delaney looks at Traveller lore collected by another outstanding folklore collector, Pádraig Mac Gréine (fondly known as “Master Green”). At a first glance, these contributions do not seem to directly address the guiding theme of “Folklore and Modern Irish Writing,” and the points they raise are not followed up in the discussions that take place in the other chapters. However, there may be a different way of looking at the matter.

Fitzgerald argues that, in the past, folklore was “regarded as a finished product, an object in the field waiting to be collected and analysed” (30). This understanding of the history of folklore could benefit, in my opinion, from critical reconsideration of the work of the collectors. True, the fieldworkers sent out by the Irish Folklore Commission believed that they were simply documenting time-old oral traditions, salvaging them from oblivion, but was that really what they were doing? In his classic essay “The Gaelic Storyteller” (originally given as the 1945 Sir John Rhŷs memorial lecture), Séamus Ó Duilearga (James Hamilton Delargy) identified the primary forum for a variety of folk activities—including storytelling, playing of traditional music, and singing of folk songs—as evening gatherings in céilí (visiting) houses.[2] Nonetheless, very little of the tens of thousands of folklore accounts documented under Ó Duilearga’s supervision, during his tenure as director of the Irish Folklore Institute (1930-35) and as Honourary Director of the Irish Folklore Commission (1935-70), was collected in such natural traditional settings. Most, if not all, folklore was recorded and written down in artificially induced situations, when collectors visited “informants” in their homes and were treated to one-off performances. In these intimate meetings, storytellers and singers showed remarkable versatility in recreating folklore for the collectors, who later adapted these oral performances into written texts for the benefit of modern readerships. If we are looking to appreciate the role of folklore in Irish writing, we might as well give long-due credit to the literary achievement of the collectors as writers. The manuscripts of the National Folklore Collection deserve to be treated not just as source material for explorations of Irish culture but also as an expression of modern literature. It is therefore particularly fitting that this volume begins with a thoughtful foreword by Angela Bourke, a brilliant researcher of Irish folklore, whose work has opened new ways of appreciating the written texts found in the folklore archives.