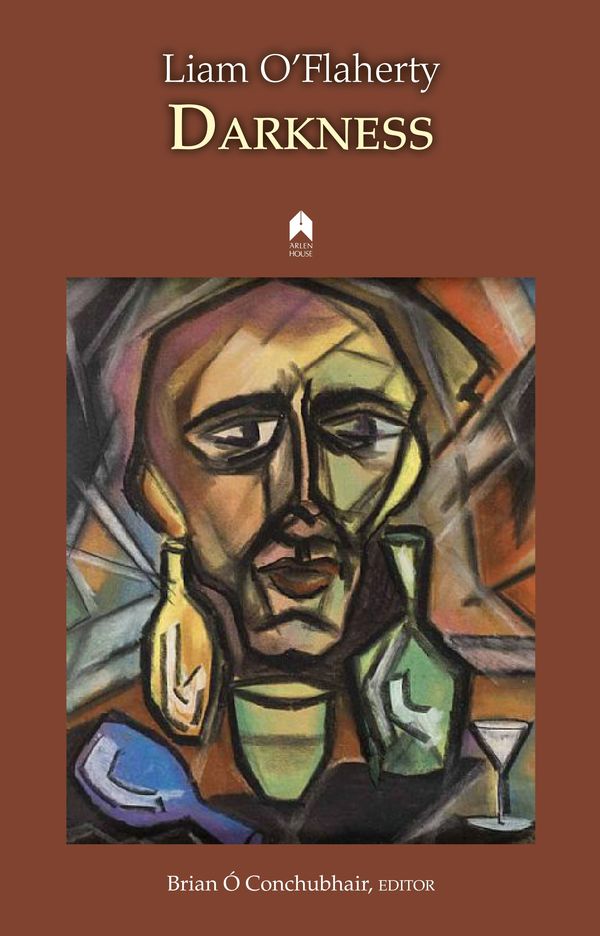 Brian Ó Conchubhair’s new edition of Liam O’Flaherty’s play Darkness—itself O’Flaherty’s own translation of his original Irish-language work, Dorchadas—should renew readers’ interest in a radical, complicated figure typically positioned on the fringe of the Irish literary canon. O’Flaherty’s play, completed in Irish in 1924 and translated into English by the author in the following year, first appeared on the Abbey stage in its Irish iteration in 1926. The backstory of that production is presented in detail in this book, grounded within the events that framed O’Flaherty’s work during his lifetime. The original ideas and motivations behind Darkness have been somewhat obscured by time; the original conceptual impetus for O’Flaherty’s work on this particular play, that of a traveling Irish-language leftist theatre, was never actualized. That otherwise lost production history is thankfully recovered in this text by Brian Ó Conchubhair.

Without sacrificing depth or anecdotal descriptive quality, Ó Conchubhair’s critical overview of the conception, writing, and production of the play is direct and pleasingly concise. A rather comprehensive biographical narrative of O’Flaherty gives those readers unfamiliar with the writer an excellent introduction into his life and ideas. This overview is followed by an examination of the composition process of Dorchadas, its opening production at the Abbey through An Comhar Drámaíochta, and its critical and public reception at the time. Ó Conchubhair has mined the archive with a great degree of skill to contextualize the play and its author with remarkable completeness in an economy of space, as his introduction comes replete with a number of portraits, documents, posters, and excerpted letters that help to round out O’Flaherty’s political, historical, and intellectual world.

Those who know O’Flaherty primarily through his most famed novel, The Informer (1925), and its Dublin-noir, Oscar-winning 1935 film adaptation by O’Flaherty’s cousin, John Ford, may be surprised to learn of the author’s commitment to Irish-language theatre. O’Flaherty’s publication record and history of political activity reveals an individual who was entrenched in a period of tremendous literary production from the mid-1920s through the mid-1930s, with novels, stories, and drama coming furiously to match the raw, unsettled mood of a nascent nation-state in the wake of Civil War. Ó Conchubhair provides the needed emphasis on O’Flaherty’s leftist activities, delightfully characterizing him as an energetic socialist from Inis Mór who “espoused Nietzschean notions and harboured anti-Catholic credentials” (16) and who ran with a circle of “World War I veterans, anarchists, socialists and avant-garde artists” (17) after his discharge from the Irish Guard in May of 1918. He had been shell-shocked at the Battle of Ypres in September 1917, an injury that would plague him with depression, headaches, and noise sensitivity throughout his life (26).

O’Flaherty’s post-military career as a political activist is most famously known for his unsuccessful occupation of the Rotunda in Dublin in 1921. Proclaiming himself the “‘chairman’ of the Unemployed Committee” (27), he led a group of disenfranchised Irish workers to hold the building for two days and issued a proclamation of a Workers’ Republic. This action gained virtually no public support, and O’Flaherty fled to Cork. He would later return to Dublin to fight on the anti-Treatyite Republican side in the 1922 Battle of Dublin.

The introduction convincingly positions O’Flaherty as a member of a little-remembered Irish literary avant-garde. By developing an understanding of the author as continually self-identifying with splinter groups, rather than mainstream Irish literary and political culture, Ó Conchubhair delivers to readers the nuance needed to grasp how political and cultural marginality—specifically in contrast to popular Irish nationalism—is expressed through O’Flaherty’s characters. The casual observer might be inclined to see O’Flaherty’s body of work as notably divided between urban and rural settings, with Darkness belonging strictly to the latter camp. Ó Conchubhair’s introduction does the necessary work that enables us to see a character like Dark Daniel despairing not only in the face of rural poverty and interpersonal betrayal, but also at the cruel fixity and impotence of cultural institutions and practices—matchmaking, in this case—to provide salvation to those on the edges of Irish society.

Ó Conchubhair points out that Darkness is a something of an aberration: an “anti-iconic” (16) depiction of the Irish Gaeltacht in the era of Revival-style cultural nationalism, written for an Irish-language touring theatre that never materialized. This ideological theme is sustained throughout the critical introduction. O’Flaherty and his collaborators over the development of Dorchadas/Darkness (including fellow Gaeltacht literary provocateur Pádraic Ó Conaire, theatre director Gearóid Ó Lochlainn, and civil servant/playwright Léon Ó Broin) are positioned as a distinct “cultural formation” (18) that provided a subversive counterpoint to the dominant institutions of Irish drama in their time. A key aspect of this group was the constant need to detach from mainstream Irish nationalist ideology. Rather than present broad social and political ideas in microcosm, O’Flaherty dwells in the local and the interpersonal. The fracture and failure of once-coherent groups, whether they are communities, military squads, or families, is a frequently reiterated theme of O’Flaherty’s naturalism. This volume does splendid work to show how O’Flaherty attempted to carve out a creative movement whose very existence was meant to be a reminder of the multivalent quality of Irish experience. Ó Conchubhair succeeds in telling the story of O’Flaherty and Ó Conaire’s vision of a travelling Irish-language theatre, but the real gravity of the introduction rests with the recounting of the circuitous path that Dorchadas/Darkness took to becoming a stage production. Readers will find a great amount of detail on the promotion and staging of Irish-language drama in the early days of the Irish Free State, especially the effort to put on such productions in Dublin by An Comhar Drámaíochta (The Drama Co-op).

The detailed introduction, of course, exists as a supplement to the text of O’Flaherty’s swiftly-paced three-act play, reproduced solely in its English-language form in this volume. (Dorchadas, the Irish-language version of this text, was also edited by Ó Conchubhair and published in 2012.) Darkness unfolds the tragic story of two families negotiating a wedding match over forty-five pages. Composed in O’Flaherty’s signature style of tight-fisted melodrama, the play centers on of the emotional disintegration of Dark Daniel, a rural bachelor and the eldest son of his family. Daniel is consumed with melancholy and despair as he reflects on a life of desolate hardship. He is persuaded to lower his guard when a marriage to local temptress Margaret appears to be in the works, but his attempt to forge an emotional connection with her is ultimately repaid with betrayal. Daniel realizes that Margaret has already secretly pledged herself to his younger, fairer brother Brian, and the tension born out of this love triangle drives the narrative action of the play.

Daniel is depicted as an outsized brute, like so many of O’Flaherty’s protagonists; he is a man struggling against his own sense of dislocation and social isolation. The physical strength he has gained from a life working the hard land is continually, almost irrepressibly, bursting from him with murderous intent: when in conversation with Margaret, she cannot help but notice the lethal power of his “big fingers that would smother the breath in a lion’s throat…your beast’s paws” (102-3). Daniel’s hands are given a greatly expressive quality in the play, and O’Flaherty’s stage directions see him repeatedly gesturing, seizing, and menacing toward other characters—this is a role that demands an imposing physical presence. Once Daniel realizes the lovers’ conspiracy against him, he “stands, with legs spread, squat, fierce, with his hands like claws in front of him, as if he were about to choke somebody” (121). Readers familiar with O’Flaherty’s work will find Daniel’s characterization consistent with several of O’Flaherty’s other literary creations, most notably Gypo Nolan, the uncontainable bull of a Dubliner from The Informer. These are characters that push back against the Revival stereotype of the virtuous peasant in ways that are as challenging as those seen in the works of J.M. Synge, albeit without the comforts provided by Synge’s levity—O’Flaherty’s play is crafted to suck the air out of the room through the sheer pressure of Dark Daniel’s anxious rage.

Darkness is a niche text, a lesser-known dramatic work by an author primarily known as a novelist and short story writer. Ó Conchubhair’s edition of this work has not been produced to canonize this play, nor should that be its expected goal. Instead, this edition is a recovery of a piece of theatrical history that has languished outside of the hegemonic memory of the Irish national drama tradition. O’Flaherty’s efforts, and the efforts of the Irish-language theatre companies with which he worked, offer us a form of cultural striving not often accounted for in the grander narratives of the Irish Literary Revival. Darkness adds to the richness and complexity of the Irish dramatic tradition in its own distinct way—if not strictly for its artistry, then for the persistence of its production history and its representational complexity. It is a self-reflexive work that resists the project of nation building and the centering of a national literature within the typical corridors of Revival-era power. It suggests the frustrations and restrictions of gender roles in a traditional society, and the explosive consequences of repression. As Brian Ó Conchubhair’s contributions in this volume indicate, Darkness reveals its full value when studied as an artifact, an emblem of Irish-language literary labor in the Dublin Anglosphere. Presented in this manner, Darkness enriches its readers’ perspectives on the diversity of the Irish Literary Revival—as well as the numerous counter-Revivals enclosed therein.